The title of this new piece from Fredie deBoer’s Substack (it’s free, but subscribe if you read often) seems to be paradoxical, but it refers to the fracas that started (or was intensified) by the new Sports Illustrated Swimsuit Issue (henceforth “SI”; see the models here).  Actually, companies like Victoria’s Secret an others have started to realize that not all women look like underfed runway models, and have started selling items and sizes that are suitable for women who are closer to the average.

The new SI features women who are curvier (or older) than models that have traditionally featured in this popular issue. One of them, Yumi Nu, is shown below. 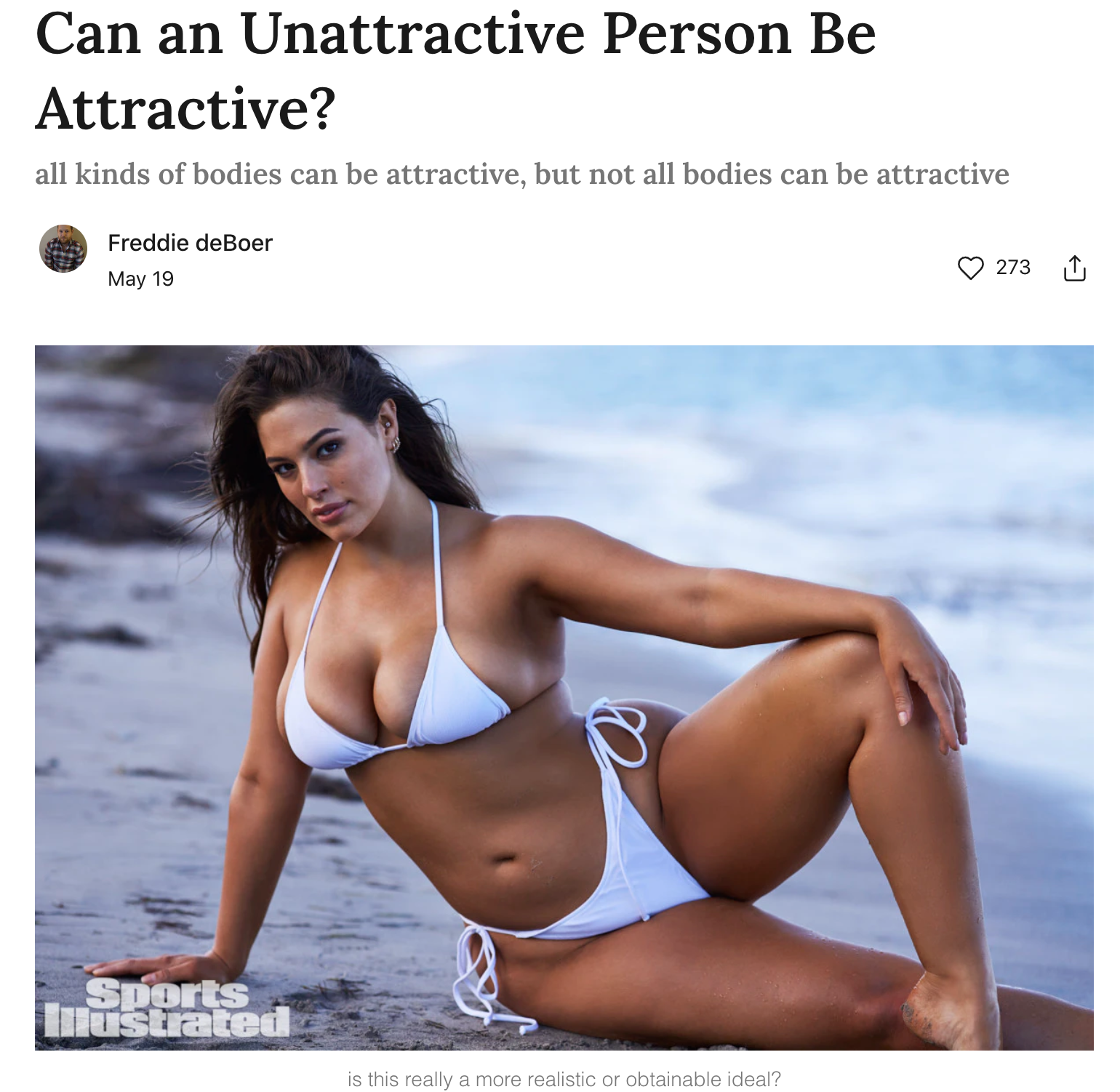 As expected, there were howls of outrage from men who wanted to see the traditional models decked out in a few square millimeters of cloth, and didn’t have any truck with women who didn’t look like Heidi Klum. One of these men was, of course, Jordan Peterson, who emitted this hurtful and thoughtless tweet, I suppose because he feels that it helps the world when he says whatever’s on his mind: 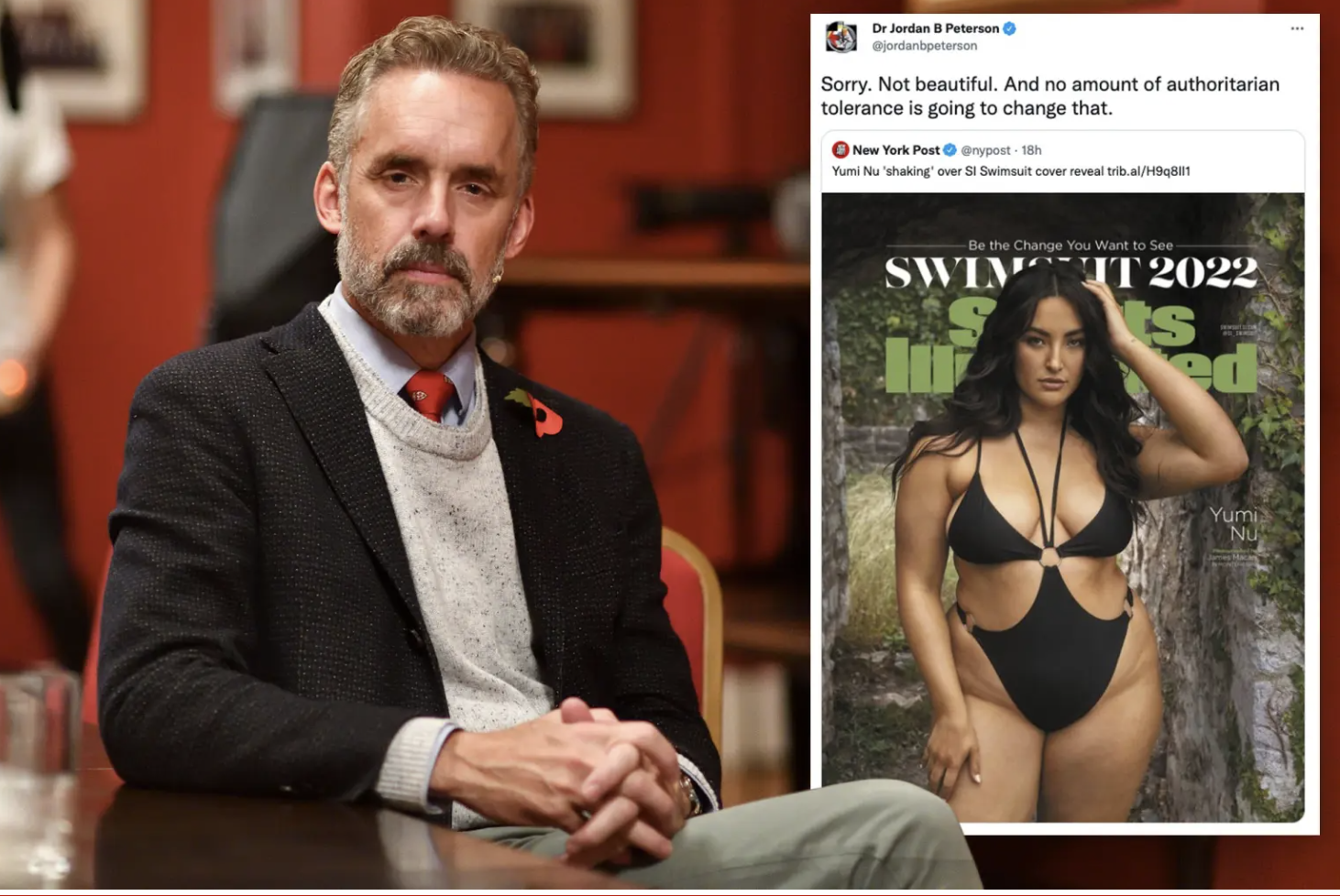 First of all, “not beautiful” is his opinion; there are plenty of men, including deBoer himself, who find Nu attractive.  People can argue about whom they find beautiful, and often there’s a sort-of consensus, at least among men, but there’s no denying that beauty, at least as conveyed in a photo, is subjective, and to deem someone “ugly” who looks like Nu is reprehensible. (I’m not taking up the issue of whether using “curvy” models is bad because it sometimes glorifies unhealthy weights. I wrote about that a while back.)

At any rate, I think we agree that beauty, at least in photographs, is subjective but not wildly divergent. But there’s enough divergence that every “type” of man or woman can be seen as attractive by others.

But that’s not what deBoer is on about: he’s on, properly, about those people who say that is our responsibility as social-justice inclined people to find everyone beautiful, whether we consider them too fat, too skinny, too ugly, or, if you include personality, too unpleasant. (Everyone knows that personality plays a huge role in who we see as “beautiful”, but we’re talking about pictures in a magazine.) If someone finds Nu unattractive, then he doesn’t have to pursue her.  The argument being bruited about, though, is that we must find people like Nu attractive, for it’s a form of “fat” discrimination you don’t.  Unfortunately, each person has a standard of beauty. This also goes when we’re talking about transgender people. I have heard cis men chewed out, for example, because they said they didn’t find trans men as attractive or as suitable sexual partners. If you don’t, then you’re “transphobic”.

This latter movement to shame people for who they find attractive or not is what deBoer is discussing, and I tend to agree with him.  What attracts us is a complex mixture of physical and psychological attractiveness, depends on our own unique brains, and it’s virtually impossible to be attracted to someone who doesn’t meet what standards of “beauty” each of us have. And shaming them if they don’t is ludicrous.  It reminds me of people telling others that they should believe in God because it’s good for them and for society; yet for people like me it’s simply impossible to force myself to become a believer. Some tastes are simply unalterable, even in the face of social justice hectoring. You can’t make someone who is wild about Rembrandt become attracted to Warhol paintings.  The need to do so as an imperative is what I call “psychological fascism”. This attitude, by the way, is completely different from arguments about things like morality and political beliefs, where minds can change.

But the whole point here is to quote deBoer’s trenchang summary of the issue, an so I’ll give a long quote from the end of his piece. The emphases are mine.

And here’s the point: the question that supposedly gets raised by these periodic controversies, which of course Sports Illustrated and other magazines actively court, is “can fat women be sexy?” The answer to that is of course. But they’re sexy because of human attributes that are no more egalitarian or fair than body fat percentage is. A fat person can be beautiful, and people of all races can be beautiful, and trans and cis people can be beautiful, and disabled people can be as well. But ugly people can’t be beautiful, and how is that any less of an “injustice”? The reality is that physical attraction is not equitable, just, or fair, as it operates under a visceral logic that’s immune to the intellectualized politics of what we intend, and who we get horny for is in large measure part of our evolutionary endowment as an animal species. That which is not genetically conditioned is still powered by psychological animal spirits that are beyond our understanding or control. And what I don’t understand is why this circumstance is perceived to be any fairer or in line with social justice than someone only being into thin women. Why will you get canceled, in certain spaces, for saying that you’re not attracted to fat women but not if you say that you’re not attracted to unattractive women? It’s not remotely internally consistent.

I have brought this up before, usually to howls of anger, but…. I’ve spent my adult life in lefty spaces (media, academia, and activism), and have been surrounded by people who embrace non-traditional masculinity and endlessly critique the traditional form. And those gay men and straight women among them? Yeah, they almost inevitably liked traditionally masculine men when it came to sex and romance. The mind conceives but the body desires. I’d go to academic conferences and see women give impassioned presentations about how conventional masculinity is rape culture, but then later that night at the mixer they weren’t exactly rushing to flirt with the sensitive 5’7 guys. Because you don’t choose who you’re attracted to.

I’m all for diversifying the bodies we see in media, but we have to always bear in mind that no one can control who they’re attracted to and there’s nothing deficient about a man who isn’t attracted to a particular fat woman. I think it’s great to highlight different kinds of bodies, but it’s great because bodies are attractive in different ways – we’re still bowing to the god of being hot, who will never be woke. Widening concepts of sexiness represent progress, but not feminist progress. It’s not some blow struck against patriarchy or whatever. (I assure you that patriarchy is not threatened by sad guys jacking off to heavier models than they used to.) And it’s a symptom of a broader cultural addiction to trying to shoehorn every last development in human society into some reductive social justice frame that doesn’t fit. “There’s more ways to be attractive than our society has traditionally recognized, and actually a lot of guys find some fat women very hot” is a perfectly progressive and coherent message, a good one. Far better, anyway, than the mental gymnastics that people try to perform to somehow make hotness subject to the demand for equality and justice.

As you know, I’m someone who believes that, for example, some lucky people are born inclined to be smart, or good at making music, or with an artist’s temperament. Some people deeply disagree. But nobody I’m aware of doubts that some people are just born beautiful, and life for the beautiful is not the same as life for the rest of us. We’re all dealt a hand, and we play it. Why can’t we accept that simple wisdom?

71 thoughts on “Freddie deBoer on “the new attractive””