There’s nothing wrong with Tish Harrison Warren’s latest Sunday sermon, but nothing new either. It’s the same old “We keep hating each other. Why can’t we all get along?” palaver. Click to read: 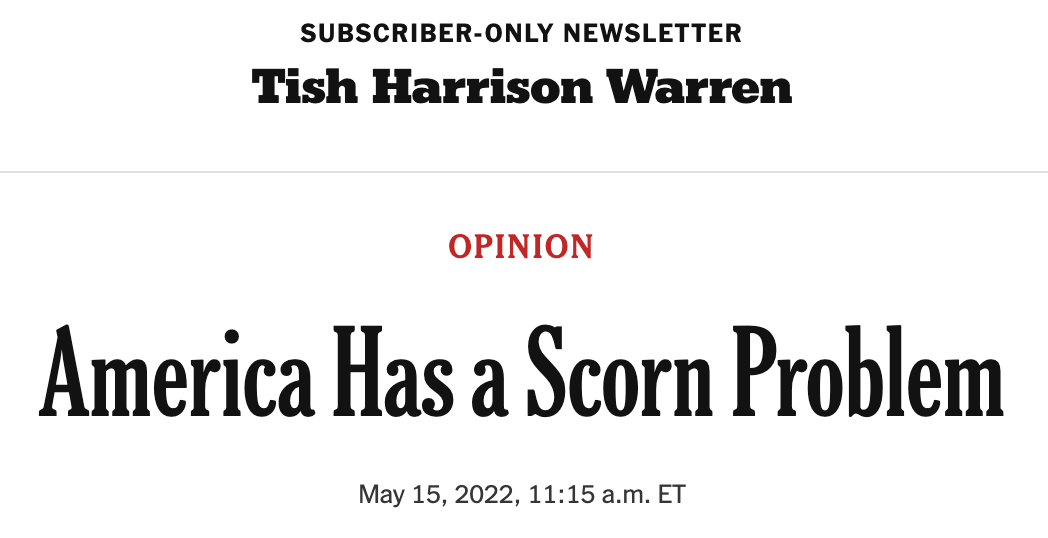 The problem is political polarization, which boils down to Democrats vs. Republicans and all that those affiliations entail. How many times have you heard this already?:

A 2019 study by Pew said, “55 percent of Republicans say Democrats are ‘more immoral’ when compared with other Americans; 47 percent of Democrats say the same about Republicans.”

We find one another repugnant — not just wrong, but bad. Our rhetoric casts the arguments of others as profound moral failings.

Those who are sympathetic to the Florida legislation dubbed the “Don’t Say Gay” bill don’t just want to leave lessons on sexual orientation and gender identity — with all the inevitable values-laden presuppositions they entail — to parents until kids are around 9 years old; they are “homophobic” and “transphobic.” Those who oppose the bill don’t simply think it wise to acknowledge the reality of multiple sexual orientations and gender identities in a pluralistic society or worry the bill may force gay teachers into the closet; they are “groomers.”

. . . .Our tendency to adopt polarizing and moralistic patterns of speech is turbo-boosted by a social media architecture that encourages animosity toward outgroups.

But this hatred toward our opponents and the accompanying habit of moralism is destroying us as people. To be clear, I am not saying that I find all the brief arguments I’ve listed above equally valid or true. And I’m certainly not saying that they don’t really matter or have enormous cultural ramifications. I’m saying that we cannot flourish as individuals or as a society if we cast all those who differ from us as moral monsters.

Well, okay. But we can surely differ in matters of morality without calling our opponents “monsters” (Trump gets a pass on this one!). But the solution? The Bible, of course!

So before we disagree with others, we have to make a decision about who our ideological opponents are. Are they like us or wholly other? How should we think of people, especially people with whom we have deep differences?

For me, the answer to this question is rooted in two ideas. One is that every single one of us is, as described in the book of Genesis, made in the image of God. With this core identity comes indelible dignity and worth. In practice, this means that I must assume that people I interact with, even those with whom I disagree, often have things they love that are worth defending and perspectives that I can learn from.

The other idea that informs how I see people is that they are fallen. The idea of human depravity or sinfulness means that every person — including me — is myopic and limited, their thinking faulty and subject to deception and confusion. This should humble us all.

One way to repair our social discourse is to begin with the assumption that we are not wildly better or worse than anyone else. Each person who disagrees with me (and each who doesn’t) is, like me, a complex blend of insight, neurosis and sin, pure and impure motives, right on some things, wrong on others.

Of course we’ve heard this all before, and how some have overcome it (viz., the friendship between Ruth Bader Ginsburg and Antonin Scalia).  And I work with plenty of people whose politics I’m not down with. There are few people whom I see as “moral monsters,” but there are some. I have a hard time, for instance, seeing Vladimir Putin as just an imperfect human made in the image of God.

But most important, we don’t need the Bible for any of this. We are NOT made in the image of God; our “dignity and worth,” for what they are, come from the fact that we are primates living in a global community that works best when we treat each other as moral equals.  The only reason why Warren says we’re made in the image of God is because the Bible tells her so, but of course if she’s being truthful, and we’re really all imperfect and sinners, then God Himself must be an imperfect sinner.

Likewise, the idea of “sin” (beginning of course with Adam and Eve, who were “fallen”) adds nothing—indeed, detracts from—the simple idea that nobody is perfect. In her view, our sinfulness is inborn because it comes from Adam and Eve. But of course some people are more “sinful” than others. I wouldn’t put the Taliban, for instance, on a par with Peter Singer.

And the semon endeth thus:

Thinking the best of the other will inevitably mean we sometimes think more highly of others than we should. We will assume their motives are purer than they actually are. But if we must err, this is the right way to err. It’s easy to think that when we consider the strongest argument and most charitable motivations of others we are doing them a favor. But we are actually doing ourselves a favor as well. Not only does dealing with steel men, as opposed to straw men, help our own arguments grow sharper, it also helps us continue to have a posture of learning, of growth, of curiosity, of compassion and of joy.

There’s a lot more to be said here, but Pastor Warren doesn’t. She gets her handsome check by purveying these kinds of platitudes—views that come straight out of secular humanism—as if they derive from Christianity. I can’t criticize her for saying the equivalent of “brush your teeth every day and don’t hurt people”, but this is all anodyne. When is the NYT going to replace her slot with somebody who a). doesn’t tout Jesus and b). says something substantive?

So go hug a white supremacist or Mitch McConnell. Amen.

21 thoughts on “Today’s Sunday Sermon from Pastor Warren: “Why can’t we all get along?””