This is a strange paper, though it makes sense . But the rationale for publishing it seems to be to say: “See? The Republicans took the quack drugs.” That happens to be true, but how does documentation help public health? Well, the authors of this JAMA Internal Medicine paper give a reason at the end, but it’s hardly convincing.

The paper—rather, a “letter”—was meant to determine how prescriptions for various drugs, including the bogus Covid remedies hydroxyquinone and ivermectin—were correlated with both time and with the political sentiments of the region where the drug was prescribed. The patterns are interesting, but I suspect the authors (all from Harvard or affiliates) were Democrats and really wanted to show that quackery is higher among Republicans. 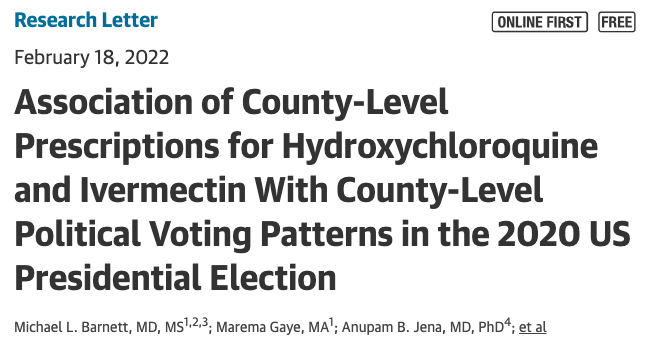 The authors looked at prescriptions written under insurance for four drugs from January 2019 to Dec 2020. The drugs were, as I said, ivermectin and hydroxychloroquine, as well as as the two drugs specified below, which are in effect “control drugs” not used to treat (or rumored to treat) Covid-19. The sample size was huge: 18,555,844 adults, pretty evenly divided between men and women, with the mean overall age of 49.1

We hypothesized that the county-level volume of prescriptions for hydroxychloroquine and ivermectin—but not other, similar medications—would be associated with county-level political voting patterns in the 2020 US presidential election.

What they’re trying to say is, “We hypothesized that Republicans fell for quack remedies more often than Democrats.” (I bet the authors are all Democrats.) And their hypothesis was confirmed, except for one brief span of time (see below).

In this cross-sectional study, we used deidentified medical claims for all outpatient visits by adults aged 18 years or older in counties with 50 or more enrollees from January 2019 through December 2020 included in the OptumLabs Data Warehouse, which includes medical claims for commercial and Medicare Advantage enrollees, as well as US Census data and 2020 US presidential election results. The institutional review board at Harvard University deemed the study exempt from review and waived the requirement for informed consent because deidentified data were used. The study followed the Strengthening the Reporting of Observational Studies in Epidemiology (STROBE) reporting guideline.

We divided the county-level Republican vote share in the 2020 presidential election into quartiles. We assessed county-level rates of new prescriptions for hydroxychloroquine and ivermectin (ie, patients with no fills for the medication in the previous 6 months) per 100 000 enrollees and 2 control medications, methotrexate sodium and albendazole (which have similar clinical applications as hydroxychloroquine or ivermectin, respectively, but are not proposed as COVID-19 treatments).

The four plots below show drug prescriptions throughout the survey region over two years. The first two show both methotrexate and hydroxychloroquine.

Plot A) shows total prescriptions, plot C) new prescriptions. In both graphs methotrexate (in orange) doesn’t change over time, while hydroxychloroquine (in green) spikes around April, 2020, and then goes down almost immediately, except for new prescriptions, which also shoot up around July of 2020, nearing election time (more on that later). The April spike for hydroxychloroquine presumably reflects the FDA’s allowing emergency use of hydroxycholoroquine for Covid-19 on April 3 and then revoking that usage on June 15. (I’d forgotten about that!) 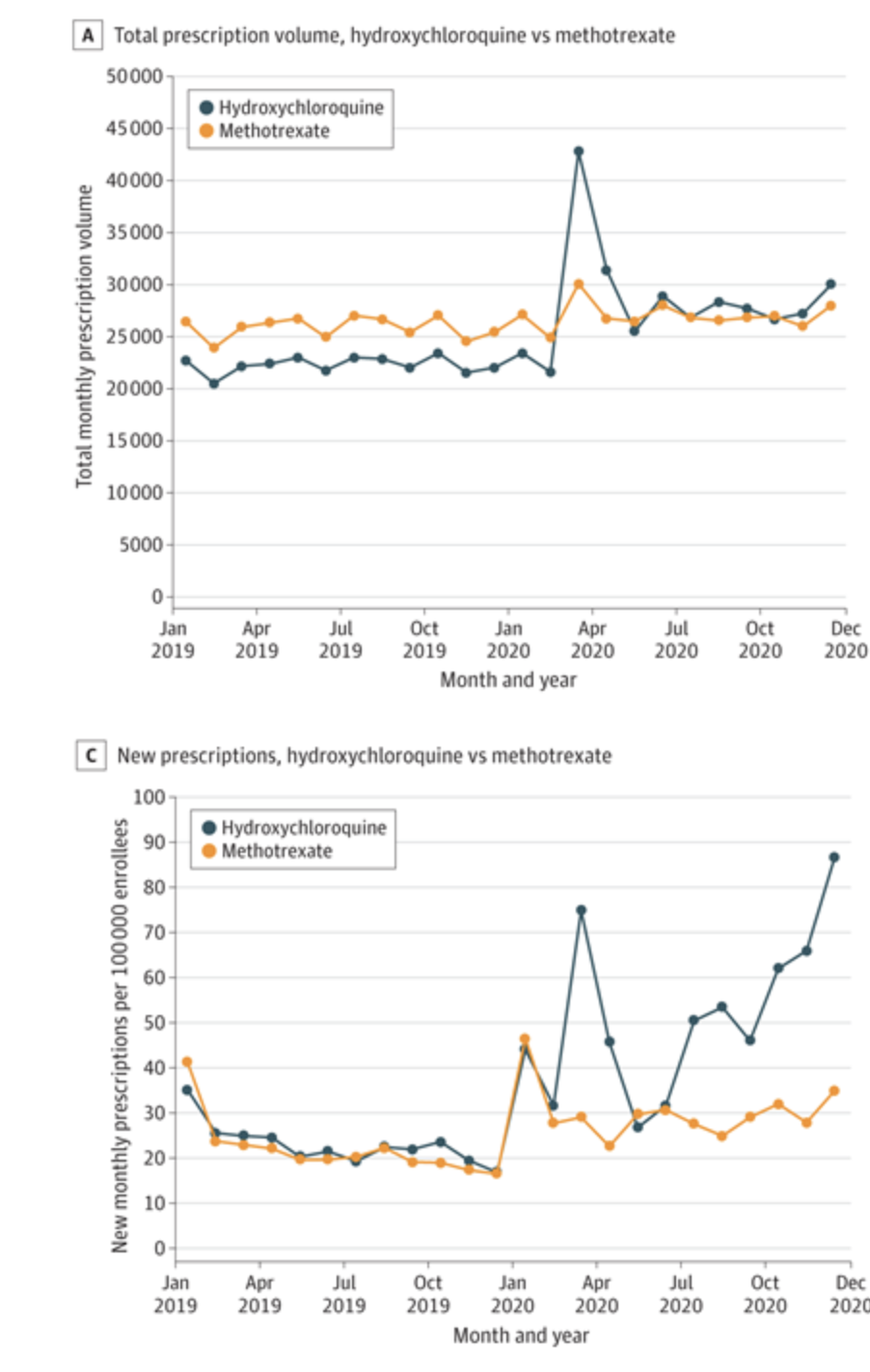 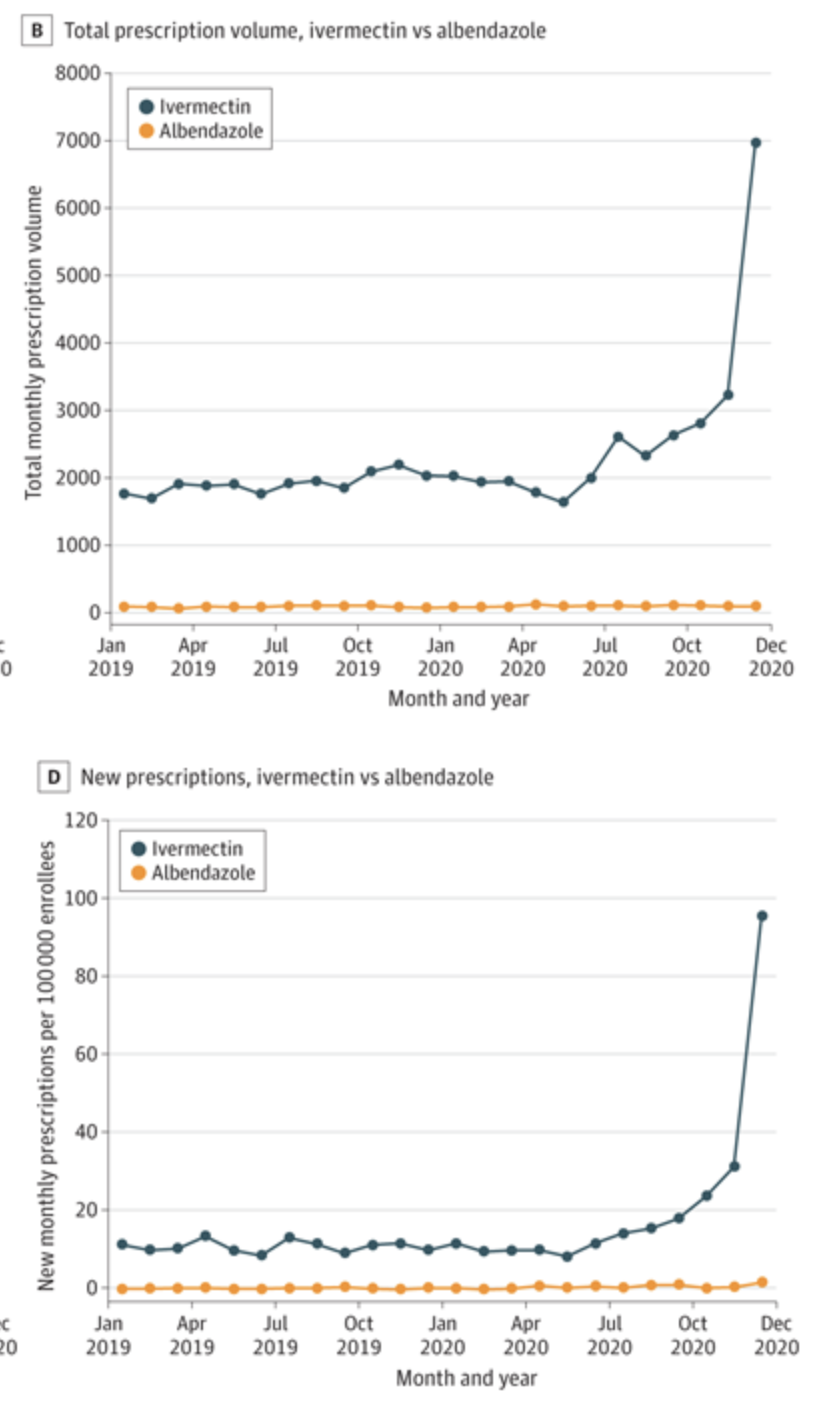 The next four graphs show only new prescriptions for drugs, and this time there are four plots reflecting four levels of Republican voting by country in which prescriptions were written. Orange shows the highest quartile of counties (most Republican) and then in descending order light blue, gray, and green (most Democratic). During the two months of hydroxychloroquine being allowed (period between numbers 1 and 2 on the first graph), people of all political stripes got more prescriptions, but in fact the more Democratic counties got more prescriptions. This presumably reflects Democrats following health guidelines a bit more assiduously than Republicans, though the difference is tiny.

Towards election time, though, new prescriptions for hydroxychloroquine again rose steeply, though much more steeply for more Republican than for more Democratic counties (remember, these are quartiles for Republicanism, so blue, green, and grey lines don’t necessarily mean “Democratic-voting counties”).

Ivermectin doesn’t show the April-May spike that hydroxychloroquine does, as the government didn’t allow and then disallow ivermectin, but there’s a huge spike in new presciptions towards election time, again much more pronounced in the more Republican counties. Note that in the second graph, the numbers 1-4 correspond to different events that might cause more usage of ivermectin. I’ve put the ivermectin key in bold in the paragraph below:

Here’s what the numbers on the X-axis mean:

Arrows show key dates for hydroxychloroquine: (1) announcement of the US Food and Drug Administration’s emergency use authorization on March 28, 2020; and (2) revocation of the emergency use authorization on June 15, 2020. Key dates for ivermectin include: (1) the initial in vitro study claiming a potential antiviral effect of ivermectin5 on April 3, 2020; (2) the National Institutes of Health recommendation against ivermectin use2 on August 1, 2020; (3) release of a now-retracted manuscript preprint that described a clinical trial claiming 90% efficacy of ivermectin against COVID-196 on November 13, 2020; and (4) a widely publicized hearing of the US Senate Committee on Homeland Security and Governmental Affairs that included testimony by Pierre Kory, MD, of St Luke’s Aurora Medical Center, who promoted using ivermectin to treat COVID-19 on December 8, 2020. . . . . . 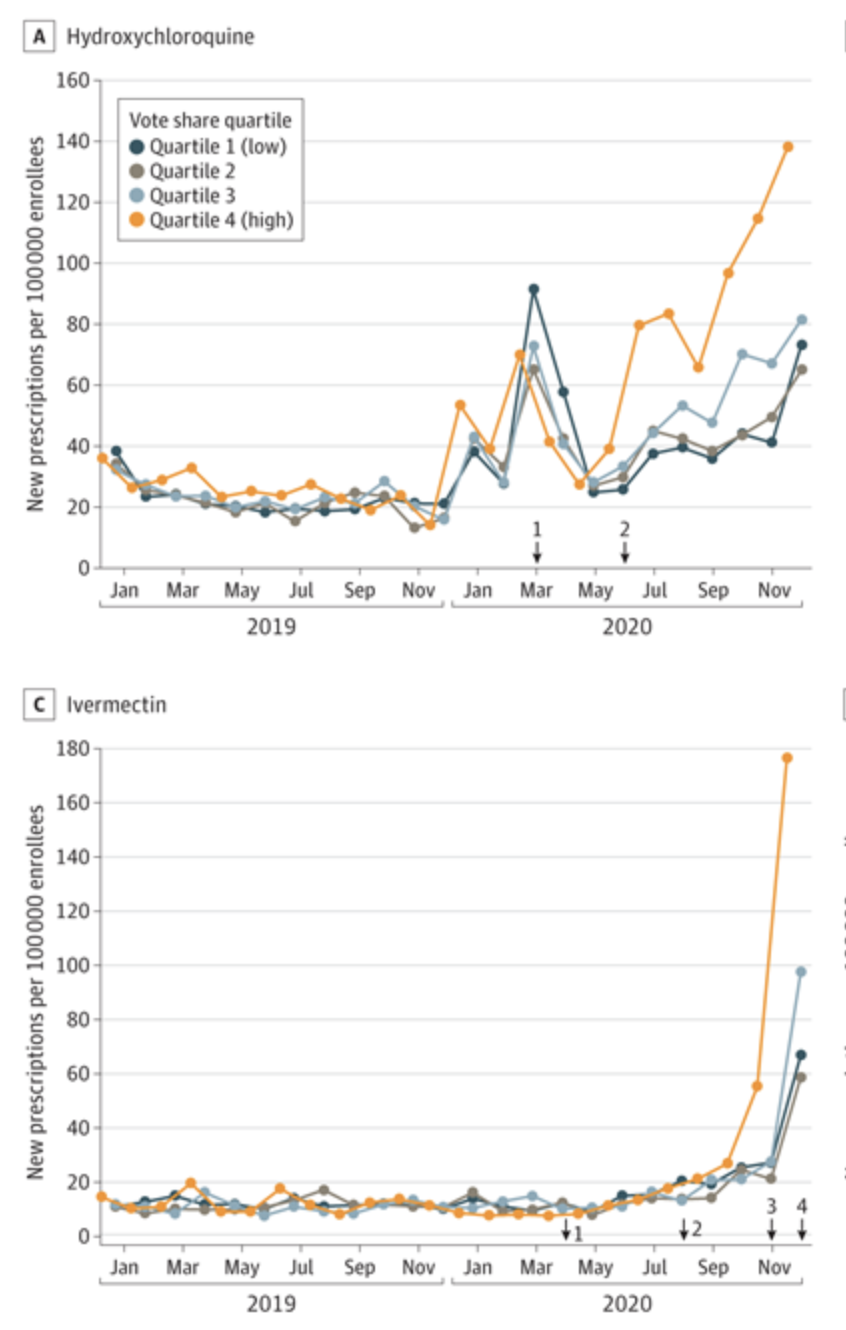 Not much going on with the two control drugs: 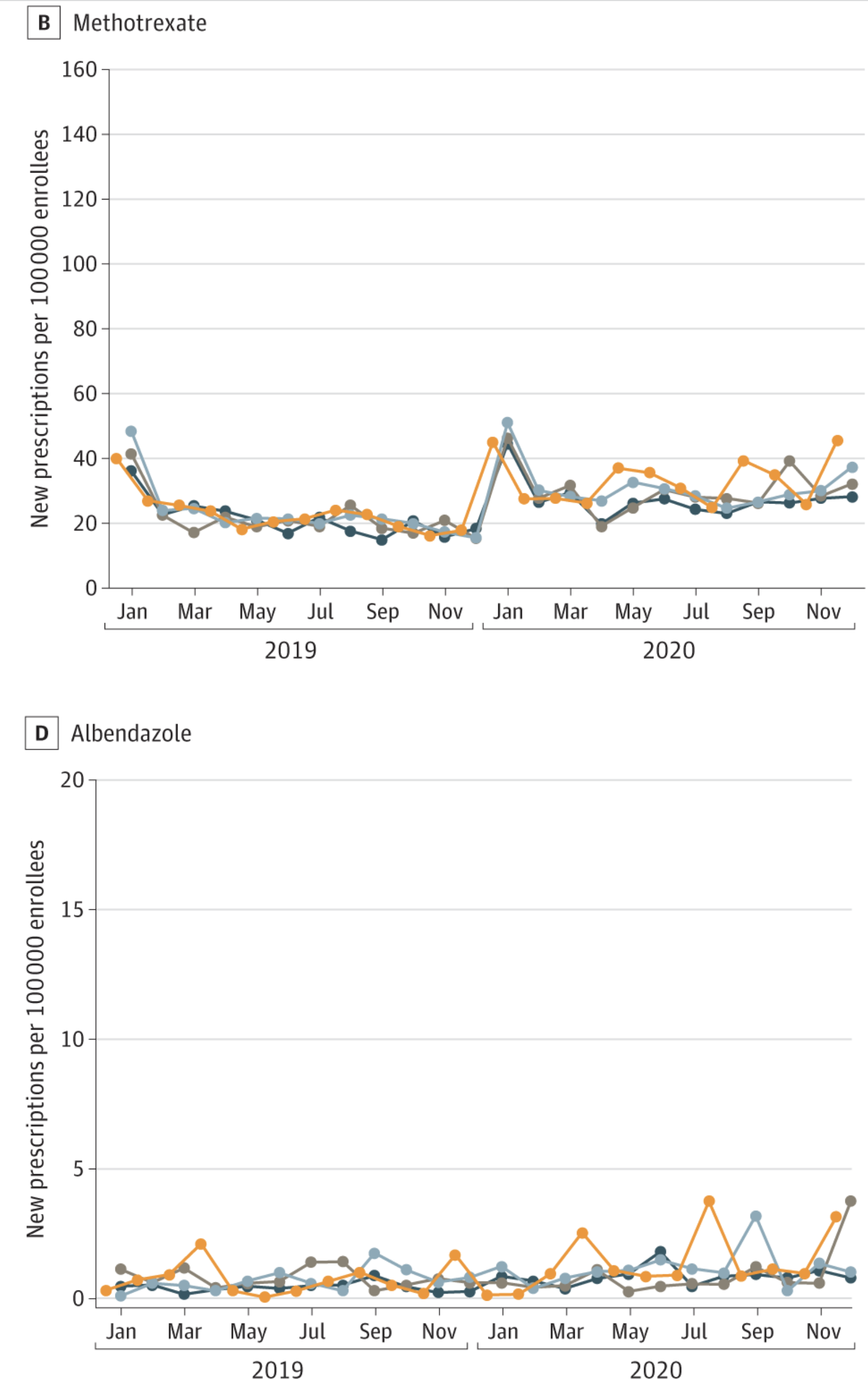 The conclusions. If you’re a Democrat, you’ll want to say that the Democrats were following the science (including the April-May spike in hydroxychloroquine use, since the government said it was okay), but the Republicans followed the rumors against the science, accounting for the higher number of new prescriptions at election time. But, as the authors emphasize, what we have here are correlations, not causations.

Why a spike around election time? The authors don’t really say, but i suppose one could theorize that Trump was whipping up Covid-19 sentiments with his pronouncements, making his people more liable to go for quack remedies. Note that the rise in all four quartiles doesn’t really imply that Democrats were taking more ivermectin around election time; the spike could be caused by prescriptions for Republicans in counties that were more likely to vote Democratic overall. I could dig deeper into that, but I don’t think the paper’s worth it.  Here’s the authors’ brief discussion:

In late 2020, the number of new prescriptions for hydroxychloroquine and ivermectin was higher in counties with higher Republican vote share, whereas in early 2020, before revocation of the Food and Drug Administration’s emergency use authorization, prescribing volume for hydroxychloroquine was higher in counties with a lower Republican (ie, higher Democrat) vote share. These findings were absent before the COVID-19 pandemic and for 2 control drugs.

This study has limitations. In an observational study, we could not address the causality of the association between county-level political voting patterns and prescribing of 2 ineffective COVID-19 treatments. Also, we were unable to assess the specific contribution of patient, physician, or other factors to the prescribing patterns.

These limitations notwithstanding, our findings are consistent with the hypothesis that US prescribing of hydroxychloroquine and ivermectin during the COVID-19 pandemic may have been influenced by political affiliation. Because political affiliation should not be a factor in clinical treatment decisions, our findings raise concerns for public trust in a nonpartisan health care system.

Here’s what I think the authors are saying, translated into normal language:

We found what we thought: Democrats follow the science and Republicans follow rumors and conspiracy theories. This raises concern for the American system because it shows that the damn Republicans endanger everybody by mistrusting the government.

Now of course I’m a Democrat and have exaggerated the “translation”. But if you read the paper, don’t you think this is what the authors really want to say?

42 thoughts on “Predicting ivermectin and hydroxychloquine use by political affiliation”