Today’s photos come from Paul Matthews in Ottawa. His captions and IDs are indented, and you can click on the photos to enlarge them.

This is is another Readers’ Wildlife Photos post of winter birds of Ottawa, Canada. There is a mix of common birds and less common birds. All photos were taken this winter except where noted.

We’ll start once more with an iconic Ottawa winter species, the Black-capped Chickadee (Poecile atricapillus)—even though it occurs year-round. Many of our chickadees have learned to come to humans to eat out of their hands. In fact, they can be quite aggressive and demanding (“Where’s our food?”). 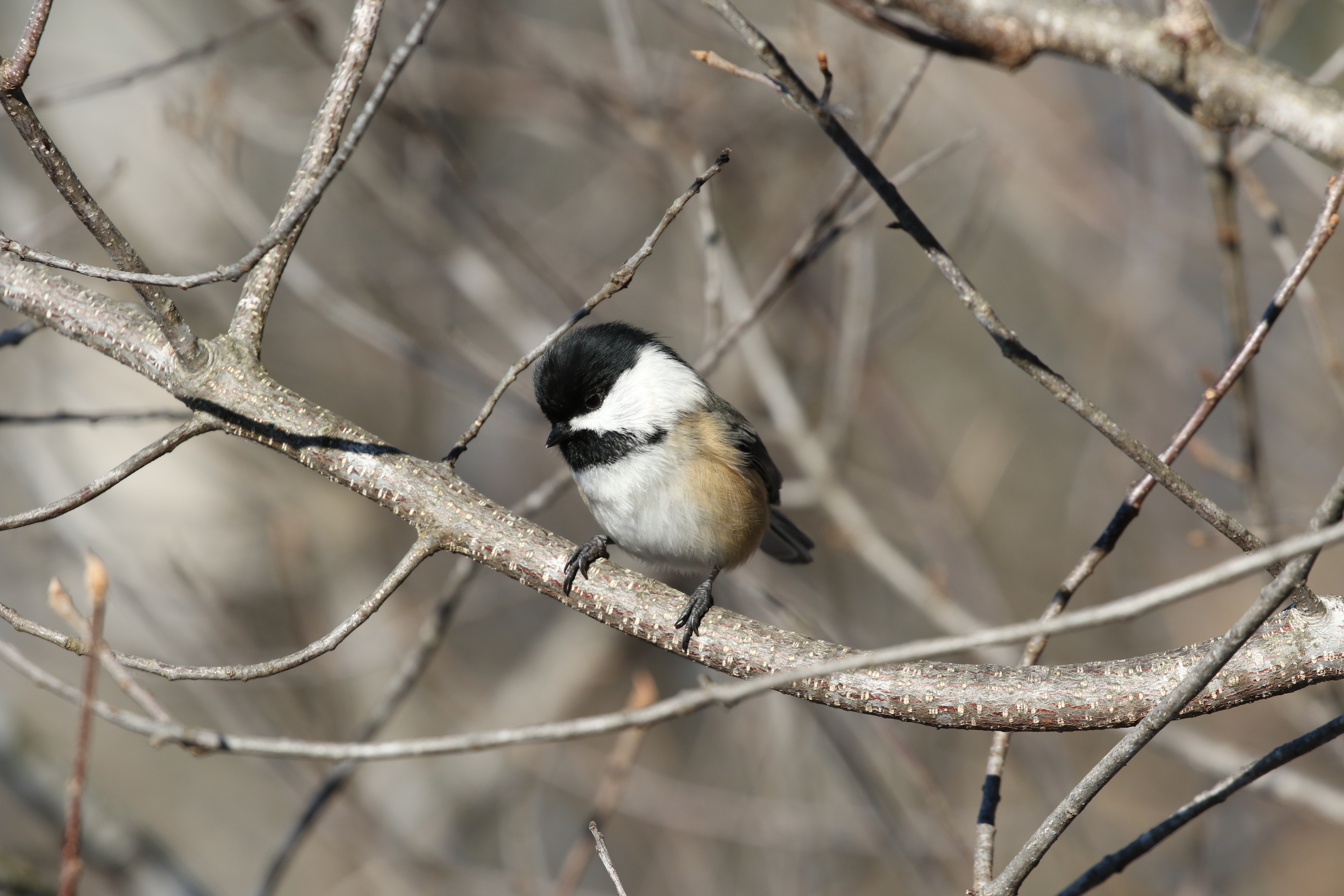 Although the chickadee may be the quintessential Ottawa winter bird, the most conspicuous winter species must surely be the American Crow (Corvus brachyrhynchos). Crow numbers in winter have increased tremendously here, presumably because of all the stuff humans leave around that these omnivores can eat. In late afternoon on a neighbourhood walk I can see dozens if not hundreds of crows flying back to their roost in a long drawn-out irregular line. Curiously they often take a slightly different route from day to day. 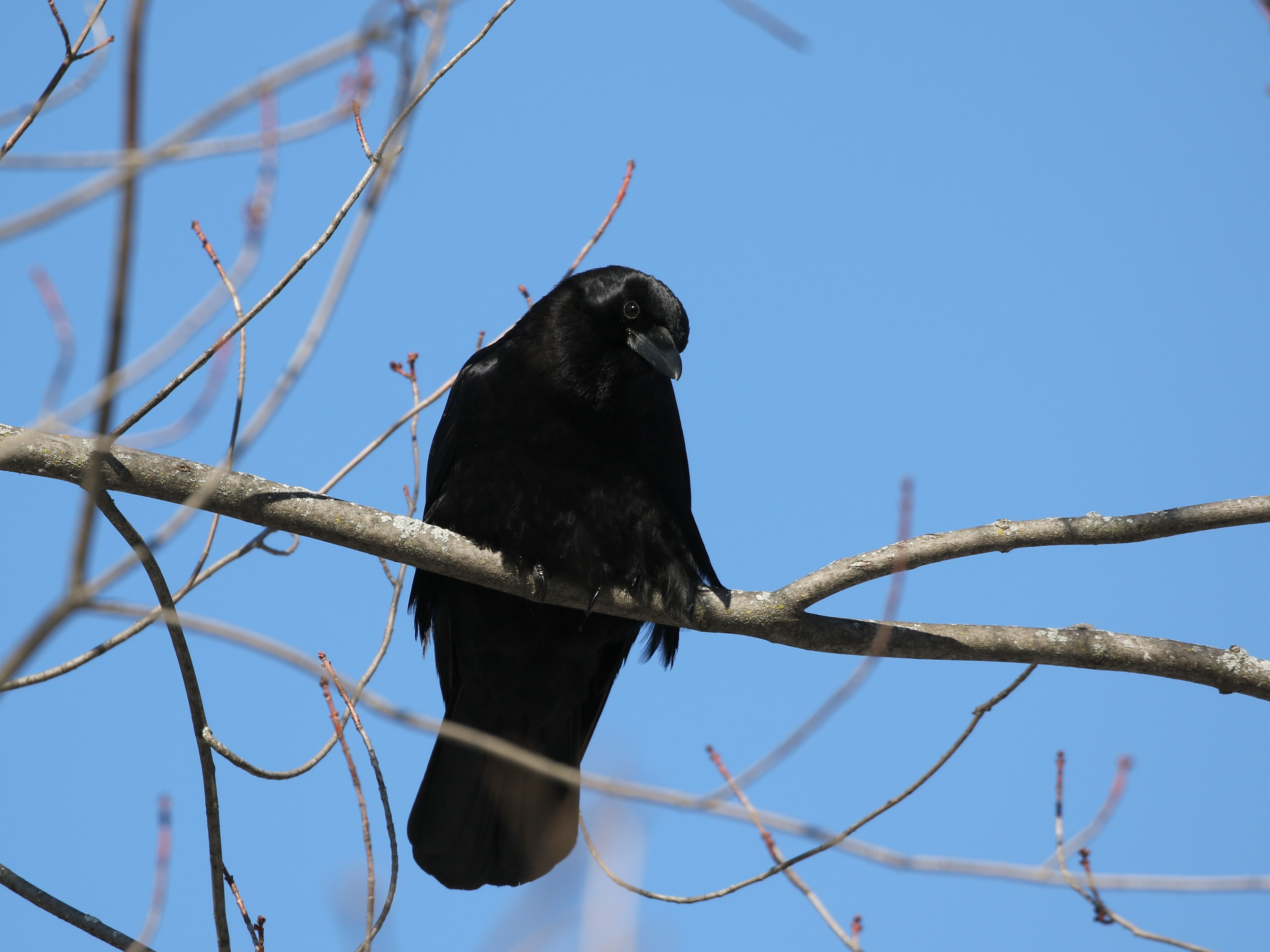 Many birders are surprised to learn that brightly coloured jays are in the same family as no-coloured crows (black isn’t a colour, right?). When one considers the in-your-face behaviour of both types of birds, it becomes easier to believe that they are related. Surprisingly, some tropical jays are shy and retiring. This is certainly not the case of our Blue Jay (Cyanocitta cristata). This bold and conspicuous bird is so familiar in winter (and year round) that one can take it for granted and forget how beautiful it is. 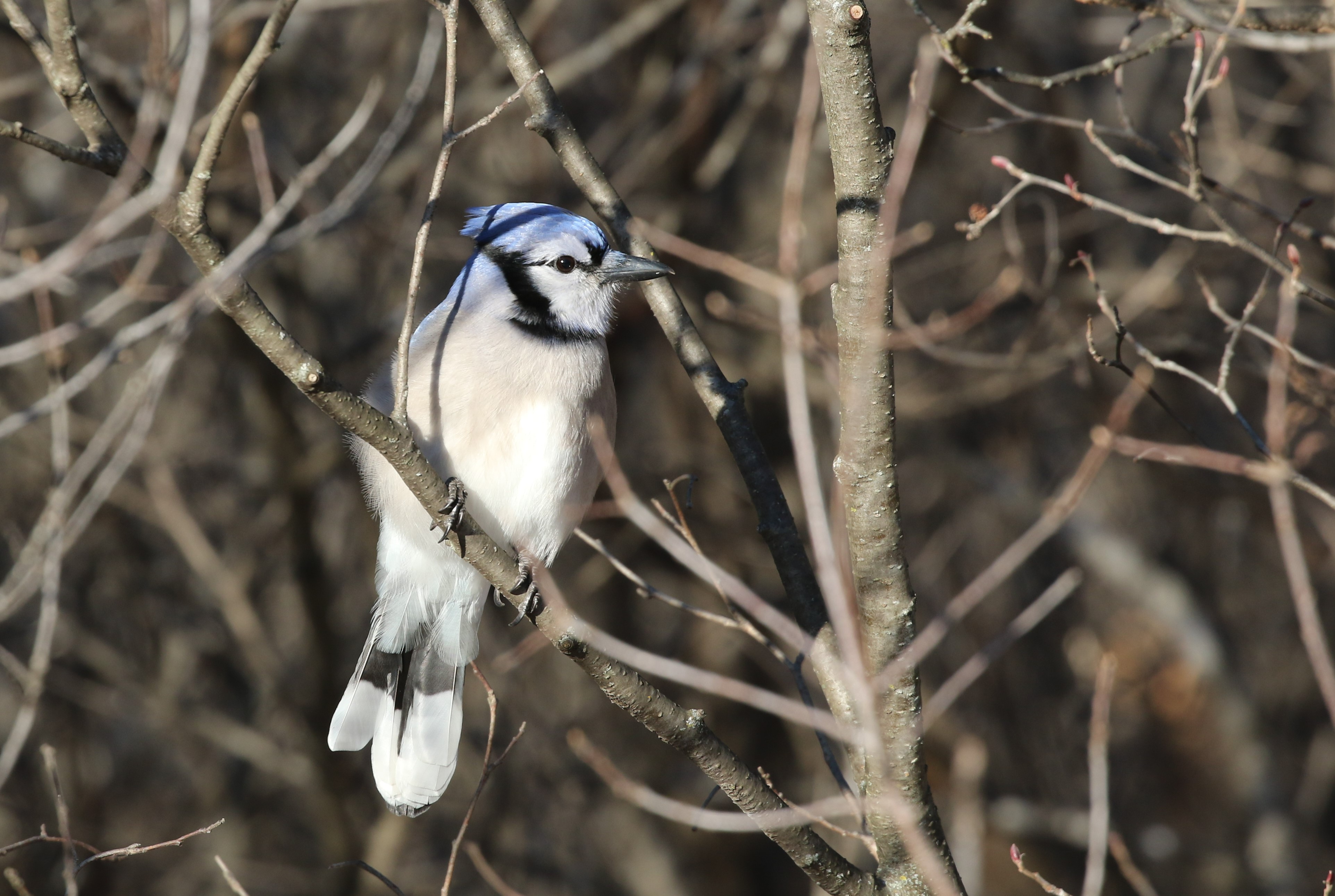 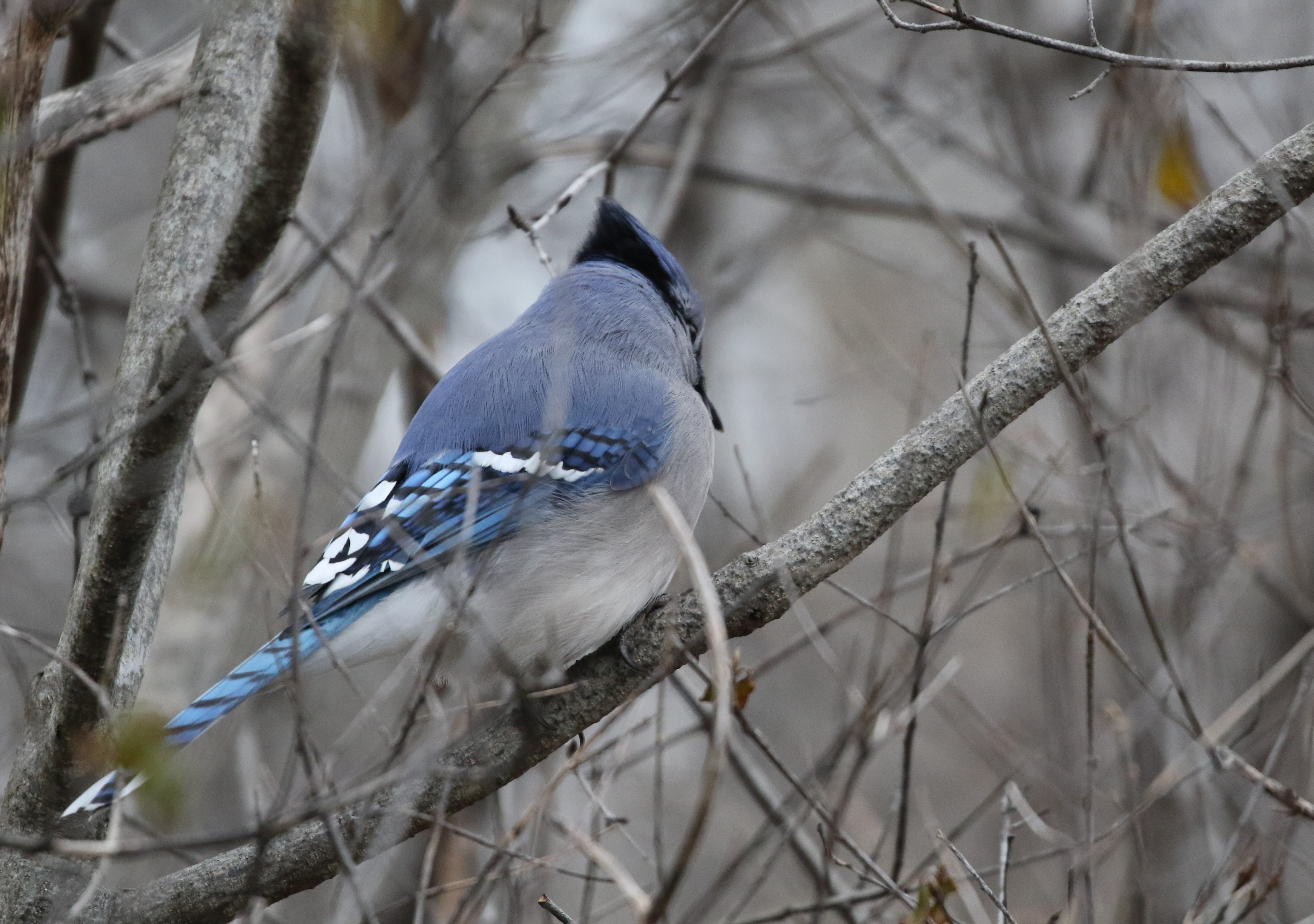 Another colourful crested winter bird (also here year round) is the Northern Cardinal (Cardinalis cardinalis). Last time I showed the bright red male, so here is a more soberly-plumaged but still attractive female. I’m told that in photo competitions there is a category of wildlife photography in which no human stuff can appear (it probably has a more formal name than “no human stuff”). This photo clearly doesn’t qualify. 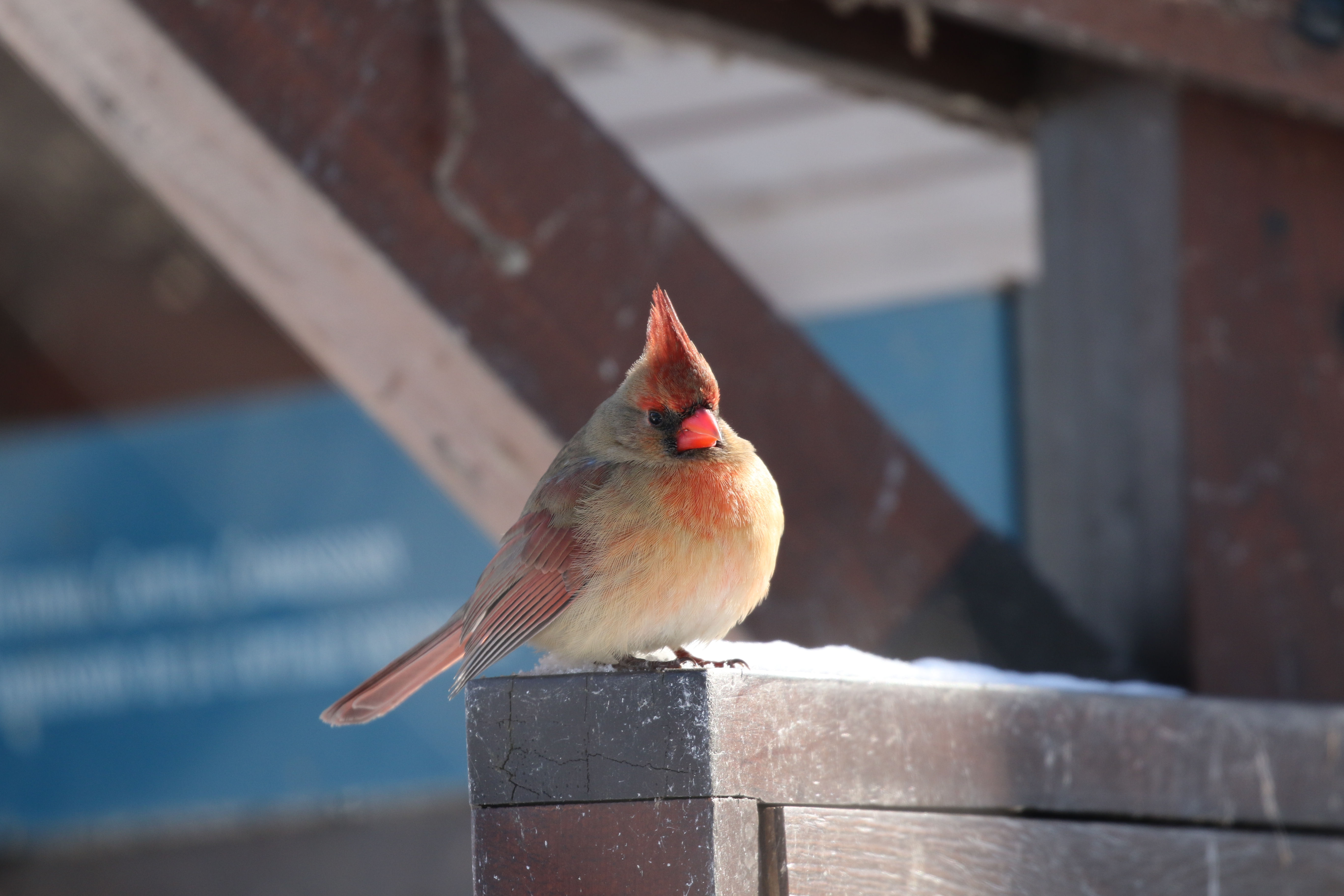 Waxwings are another crested type of bird, but they have very different personalities from those of blue jays and cardinals. They are highly gregarious and usually tame and placid. When I see a flock of waxwings in the winter I tend to hope they are Bohemian Waxwings (Bombycilla garrulus) rather than Cedar Waxwings (Bombycilla cedrorum) because Bohemians only occur in the colder months, whereas Cedars are common in the summer. This winter I have only found Cedars, though, including this one. 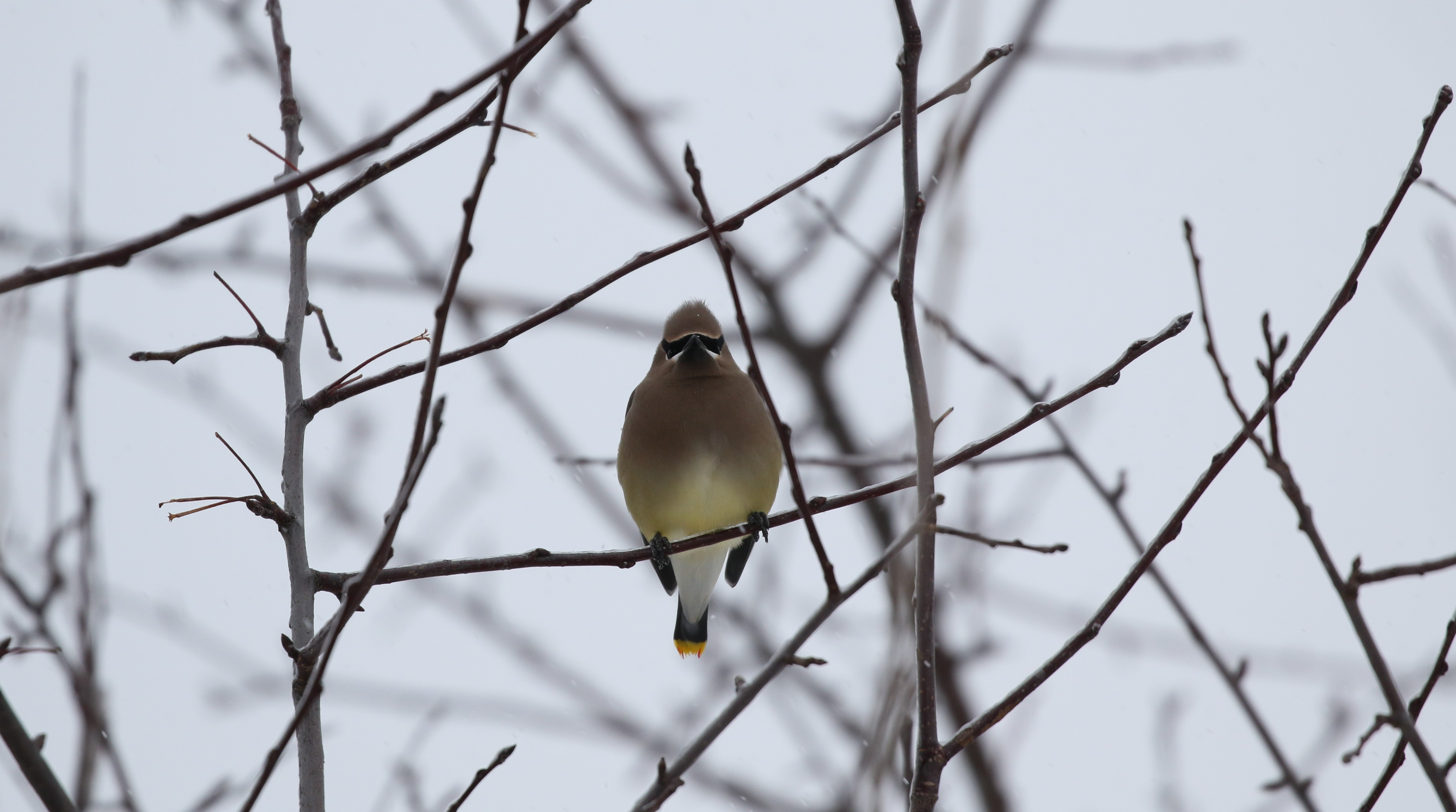 As their name suggests, Bohemian Waxwings are rather nomadic and erratic. This is true of many winter species of birds, which need to roam widely in search of food. They can be numerous one year when food is plentiful in the area and almost absent the next when food supplies are down. This photo of Bohemian Waxwings was taken a few years ago with a light, convenient and inexpensive superzoom camera (rather than with my heavy, inconvenient but fancy new DSLR). The superzoom did ok. 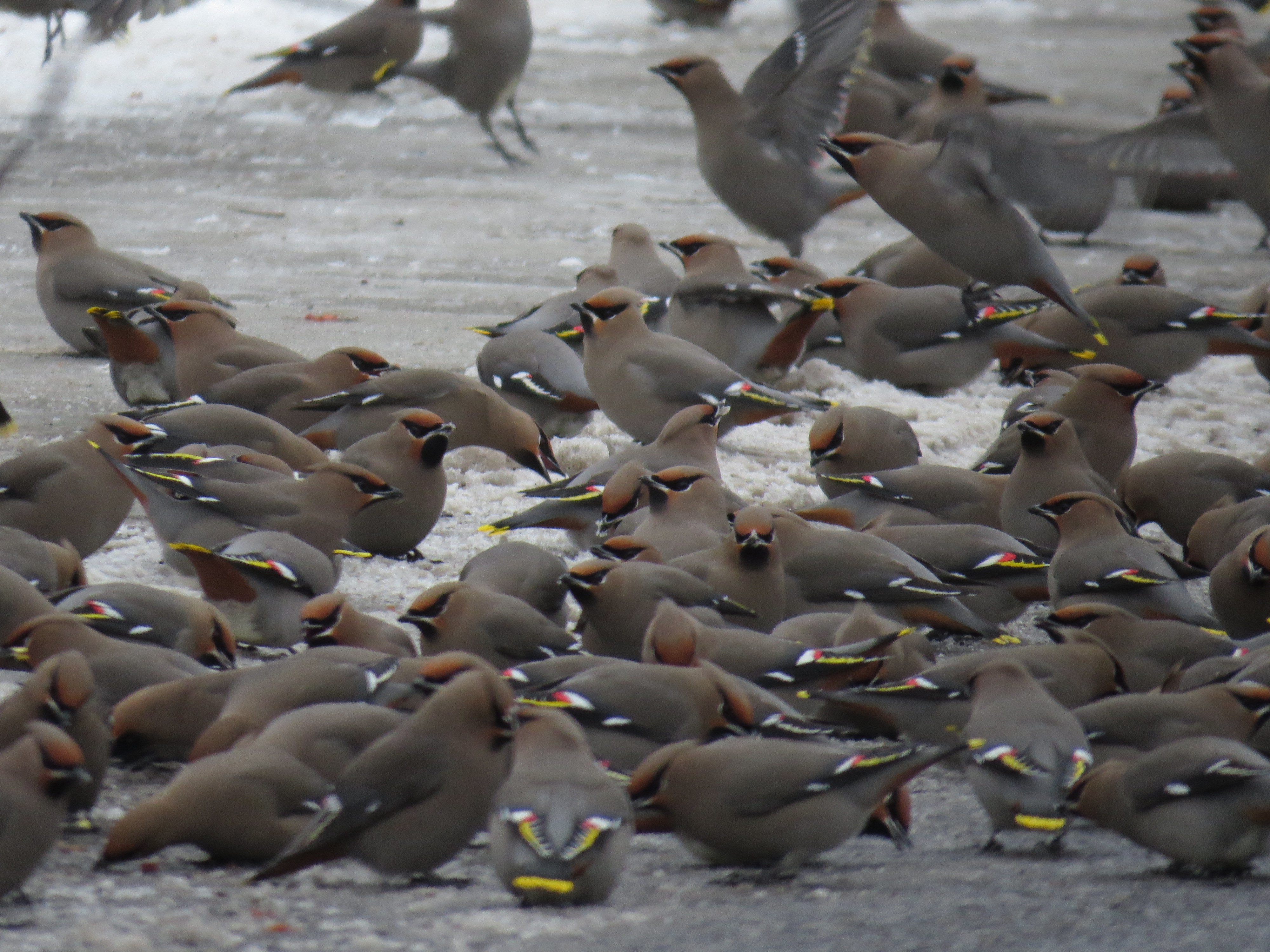 Mallards (Anas platyrhynchos) are another species whose winter numbers have increased, despite the scarcity of open water. This female was chilling (almost literally) right in the middle of a snow-covered footpath. 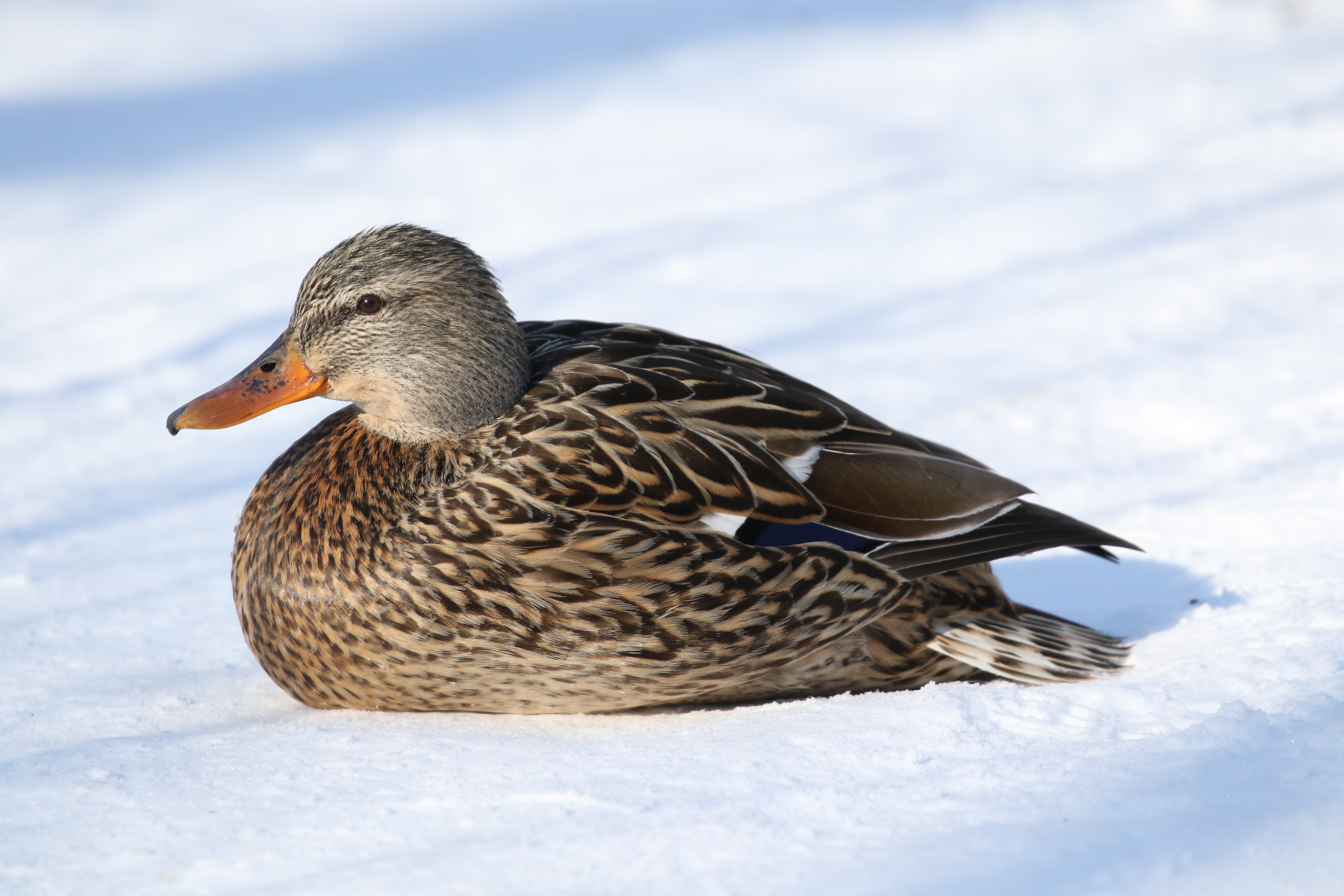 A bit further down the trail this male mallard ran up so fast that I was unable to avoid cutting off one of his feet in my photo. I was hoping he was a-waddlin’ to the female, but I was the object of his desire (or at least the food he assumed I had for him was). I had to disappoint him but many humans do feed the ducks. 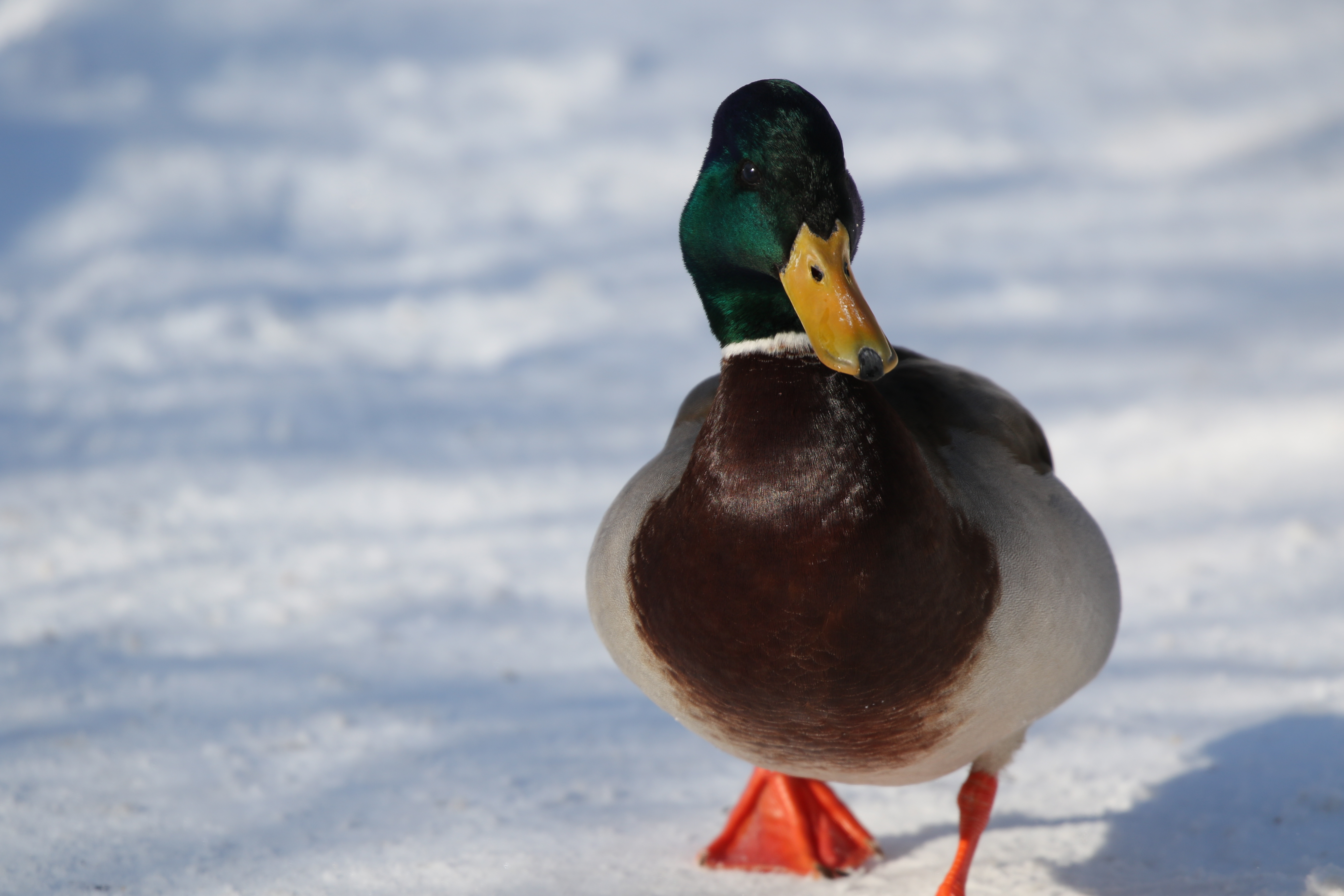 The mallards at this location have just about as cushy a life as a wild creature in an Ottawa winter can expect. They get fed, so their main challenge is enduring the often bitterly cold weather, something they are well-equipped to do. Very occasionally though, there is a winter when something happens (terrible for the ducks, but exciting for birders): for example a rare northern Gyrfalcon (Falco rusticolus) may visit for the season and hunt the mallards. The Gyr, as it’s known, is the world’s largest falcon and the mallards go from relaxed and nonchalant to very nervous and hard to find. This photo of a gyr was taken a few years ago with the superzoom. I’m not sure what it’s caught. Perhaps it’s best not to ask. Because of the Red-shouldered Hawk’s recent visit to Botany pond, I hesitated to include this photo in the post but it’s all part of Ottawa winter birding—and a red-shouldered hawk is no gyrfalcon. 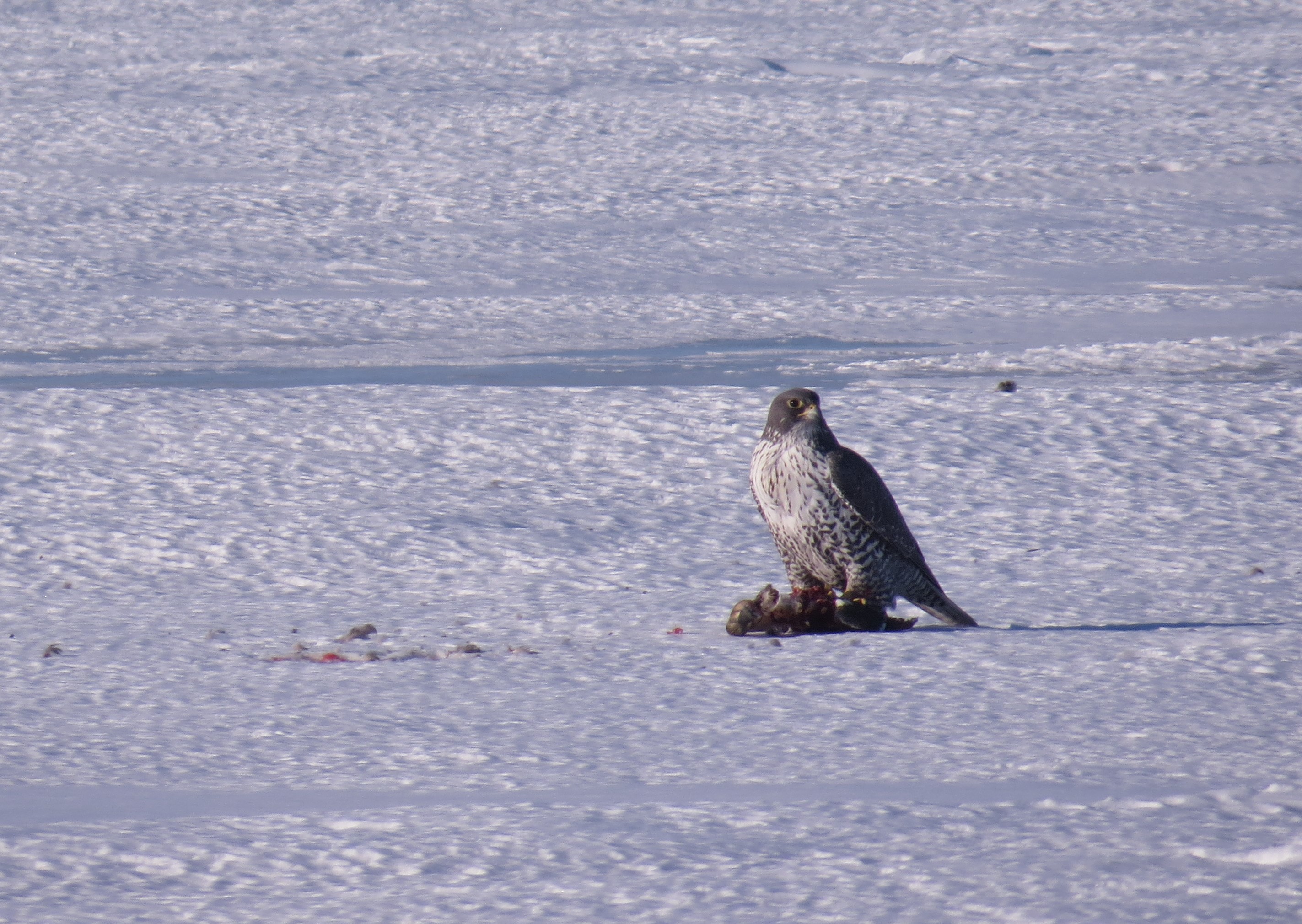 Speaking of predators, the Barred Owl (Strix varia) is another species that has increased considerably in Ottawa over recent years. It is now our most common owl. That title used to belong to the Great Horned Owl (Bubo virginianus), but sadly its numbers have greatly declined. I don’t know why this is. Although the two species prefer somewhat different habitats (coniferous or mixed forest for Barred, woodlots next to more open land for Great Horned) they are both quite adaptable, and I suspect Barred Owls are using territories vacated by Great Horned. 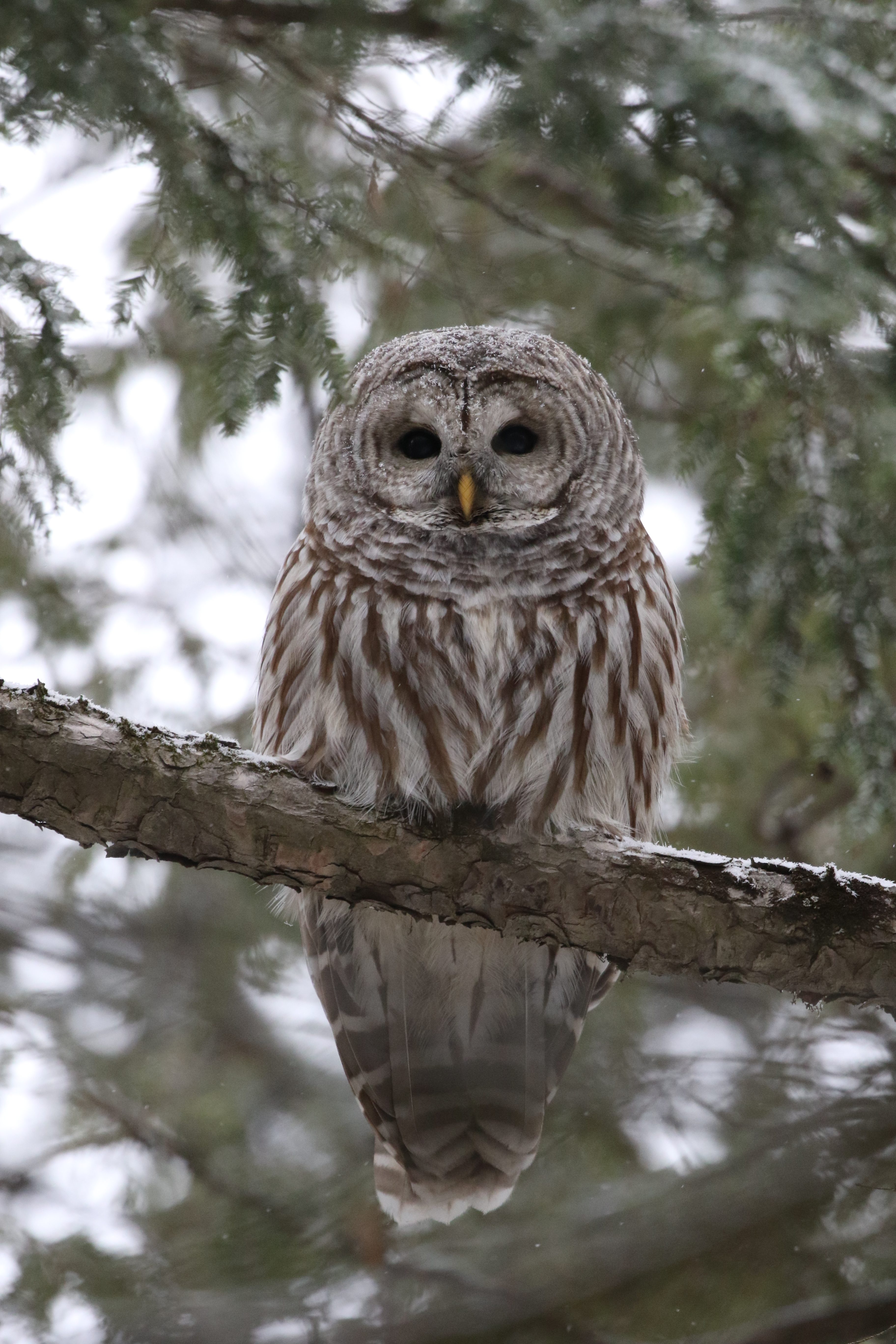 Although they are very large owls, Great Horneds can disappear completely in dense conifers. I don’t have a recent photo of this species: the one below was taken some years ago with the superzoom. I could only see it from just the right position and angle. 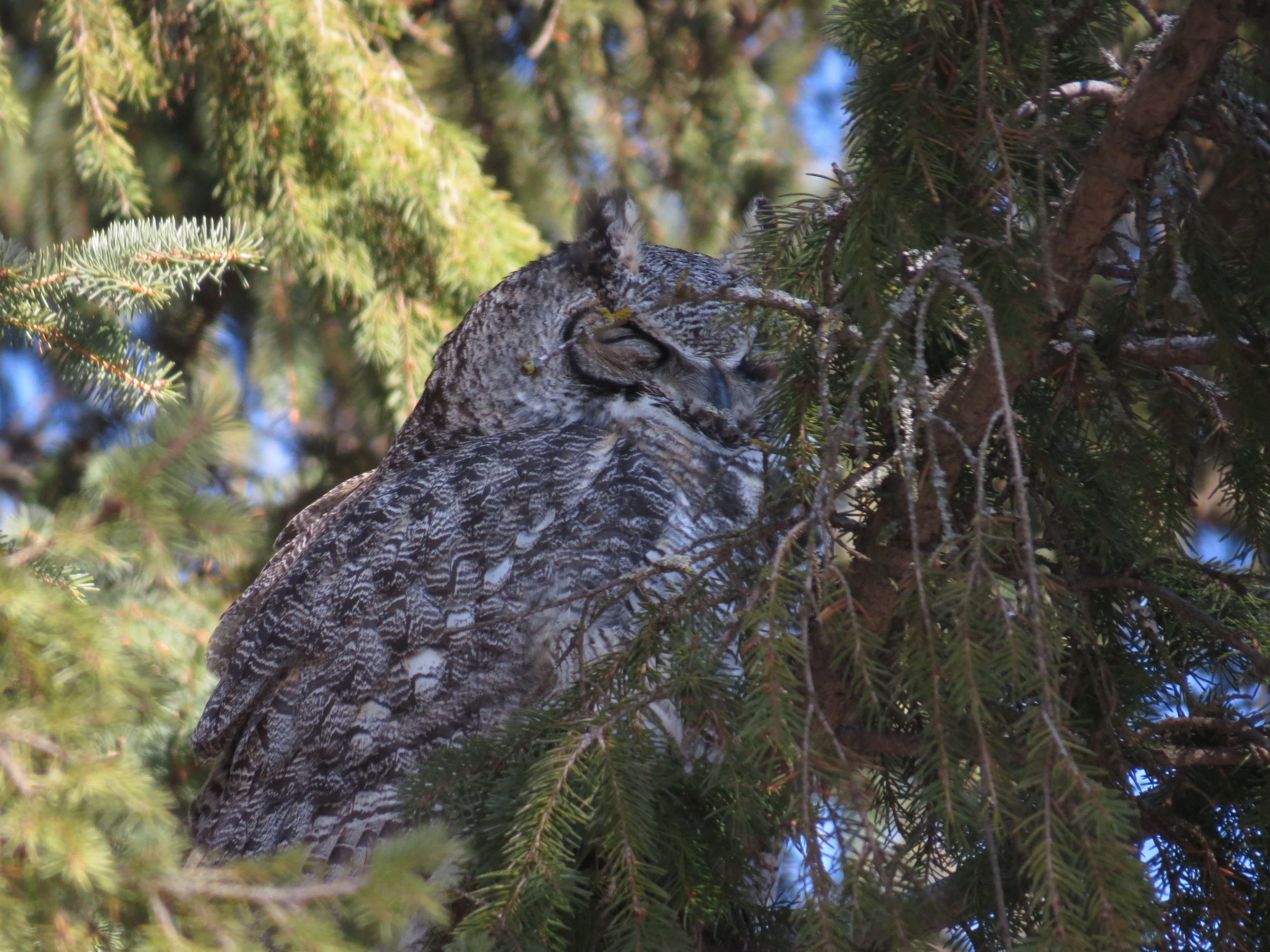