People might beef because the article below not only appeared in The American Conservative, but was written by arch-conservative Rod Dreher. For those who ignore reports from such sources, you might skip this and see the post from the Guardian above, but I pity such folks for refusing to engage with Right-wing sources, for those sources are almost the sole documentors of the woke shenanigans that may bring Republicans back to power.

To satisfy those who can’t stand to read Rod Dreher, I’ve quoted only his sources, with the rest of the post being the words of the censorious and ultra-Elect Princeton University. It turns out that Princeton is going after ballet, having decided that that genre of dance is racist, white supremacist, and “ableist”. It also needs land acknowledgments before every performance!

Before I start, let me say that I’m not much of a ballet fan, but I do see the beauty in some virtuoso performances. And although it’s traditionally white, like much dance, that barrier is being broken down by people like Misty Copeland and the advent of black ballet companies. What concerns me more, knowing that ballet will inevitably become more diverse, is the credible claim that ballerinas are pressured to maintain a slender image, which may cause them to develop eating disorders. I’m not sure how common this is, but it’s a concern. But it’s impossible to do “traditional” ballet if you can’t jump around onstage, which requires at least an absence of obesity. 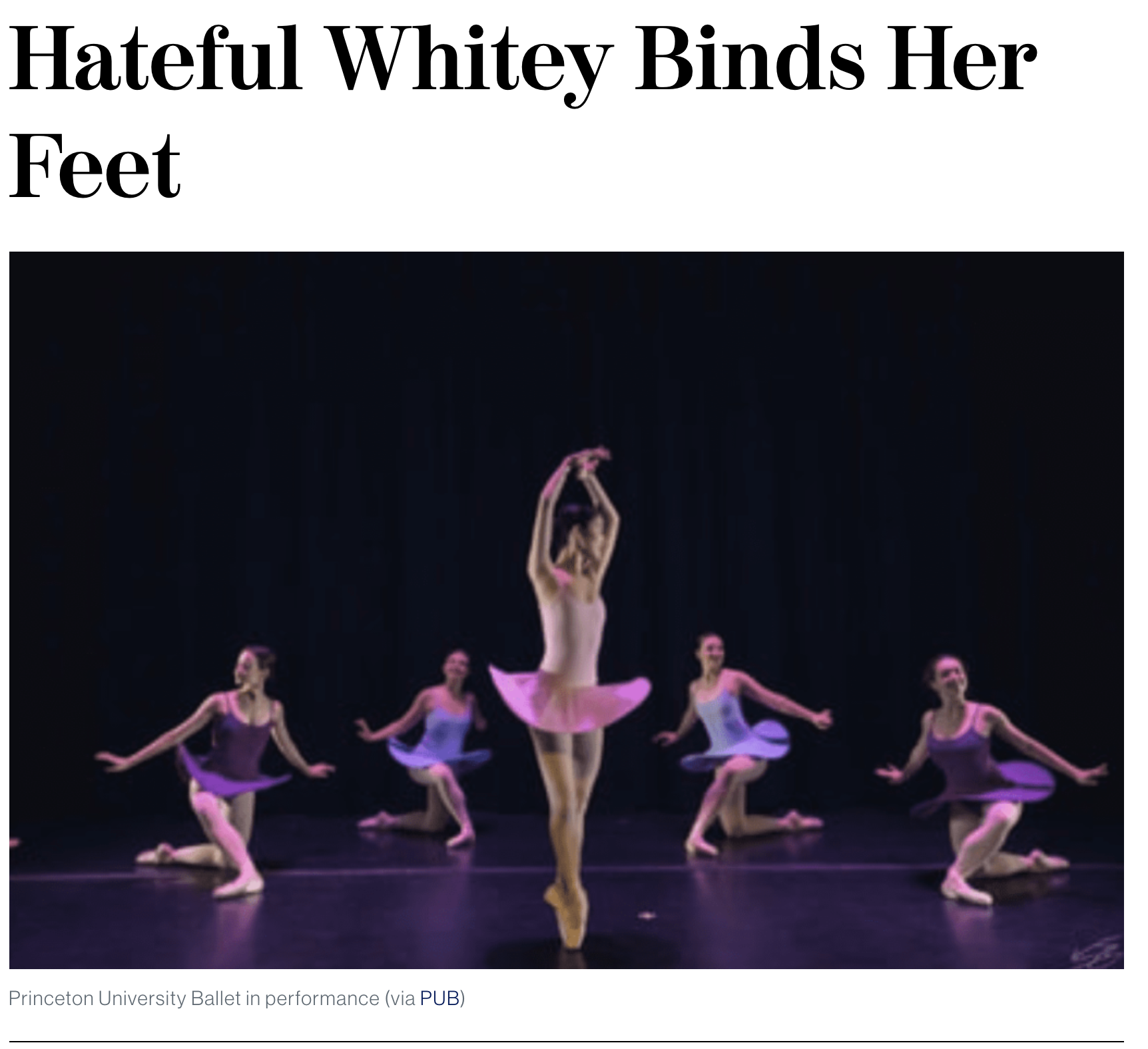 Here’s Dreher’s introduction. I’ve omitted his fulminations, which you can read at the site:

A source at Princeton University passed to me two documents sent out by the president of Princeton University Ballet (the student-run recreational ballet club), regarding the club’s diversity, equity, and inclusivity initiatives. I quote them both below, in full. The first was written by the club leaders, who in it affirm that “we are all entering this space with a mindset that what we see as perfect is a white standard” and “we aim to decolonize our practice of ballet, even as ballet remains an imperialist, colonialist, and white supremacist art form.” (Gosh, better not tell these woke dingbats about Alicia Alonso, the Cuban prima ballerina, founder of the Ballet Nacional de Cuba, and ardent Castroite.)

The second document is about “Action Plan Guidelines”. I am told that it was not written by the students, but by Princeton alumni who led the “EDI Circuit.” The document was given to all the clubs that participated. The source says, “I don’t think it was mandatory for all the performing arts groups. Still, it was organized by the University’s offices, namely the Office of the Dean of Undergraduate Students, the Office of Diversity and Inclusion, and the Lewis Center for the Arts.”

I’ll quote only bits from the first document, and assume that it’s genuine.  I was going to bold parts to emphasize them, but really, the whole screed needs bolding. This is only part of that first document:

Ballet is rooted in white supremacy and perfectionism. We are all entering this space with a mindset that what we see as perfect is a white standard. Unlearning that will be difficult but rewarding. Before we begin detailing our action plan, we want to acknowledge that our leadership and those who composed this plan are all white.

Firstly we would like to add land acknowledgement to our shows, in addition to historical context in our programs. We rarely shed light on the problematic history of our art form, and want to bring it to the forefront of our performances.

We aim to decolonize our practice of ballet, even as ballet remains an imperialist, colonialist, and white supremacist art form. We realize our distinct freedoms as a college run dance group, which is that we do not report back to any sort of board or funding programs that would restrict our choices. In selecting new members and cultivating our style, we want to centralize artistry instead of technique, in the hopes of maintaining our core purpose as a ballet company but doing away with some of the stringent and exclusive standards that pervade the art form. As this is particularly important during auditions, we will be prefacing audition discussions with a frank recognition and repudiation of our own biases. . .

. . . We hope to take steps to ensure that PUB membership, not just leadership, requires a commitment to EDI work. As such, we have decided that participation in service and outreach to local communities will become a requirement of every company member. We partner with an organization that members can sign up to volunteer with, but there are numerous other opportunities for dance service on campus. Even though we cannot change some of the biases and prejudices that exist in ballet off campus, we can dedicate ourselves to combating that exclusivity in our local communities and for the next generation.

. . . We would also like to open a conversation about body image and take steps to heal and deconstruct the harmful and racialized ideas about body image that many of PUB’s members enter the company with just by virtue of being a ballet dancer. Historically, PUB has been neutral on this issue, and while body neutrality is something some may strive for individually, it is not realistic or helpful for a group of ballet dancers who have internalized damaging ideas about how they should eat and what they should look like. We are hoping to bring someone in from outside the company to train the officers or the company as a whole on how to talk about body image and how to create an environment where we feel comfortable talking about our struggles with body image while also helping to deconstruct our assumptions about it.

The last paragraph does have a point, but the aesthetics of an athletic, healthy body is essential for ballet, as it is for sports. But the pressure to develop a thin and graceful body type does not seem to be “racialized” to me. All ballerinas, black or white (and there are now many of the former, including entire companies) will have to deal with the need to be athletic in a way that makes the performance aesthetically appealing.

61 thoughts on “The Elect at Princeton University decide that ballet is racist, sexist, white supremacist, and thoroughly problematic”