It’s National Bible Week, which extends from Nov. 21 through the 27th. (Started by Franklin D. Roosevelt, it always occurs the week of Thanksgiving.)

Reader Ginger K. pointed out that the amusing bit of hokum below, honoring Bible week by celebrating the world’s best-selling work of fiction, appeared on the MSN “lifestyle” site in its entirety. And it was taken from the Stars Insider site, a celebrity and entertainment “news” venue.

Being on MSN News brings it a lot of attention, as that site is touted as “the world’s #1 desktop news servic , reaching over 500M users every month in 180 countries and 31 languages across MSN, Bing News, Microsoft Edge, Microsoft Launcher, the Windows lock screen, apps for Windows, iOS, and Android, and popular third-party mobile OEMs, mobile carriers, and browsers”.  MSN News is also the #2 news and media website in the U.S.—the 31st most popular among all websites in the U.S. That means that this craziness reaches a lot of people.

Click on the screenshot to read.  The Intro first:

Like any other religious texts in history, the Bible is open to interpretation and it’s not confirmed by science to be factually accurate in every account. This, however, is not the case for every bit of text in the best-selling book of all time. In fact, some of these verses have been proved by science to be true.

Intrigued? Click through the following gallery and discover the parts of the Bible that have been confirmed by science. 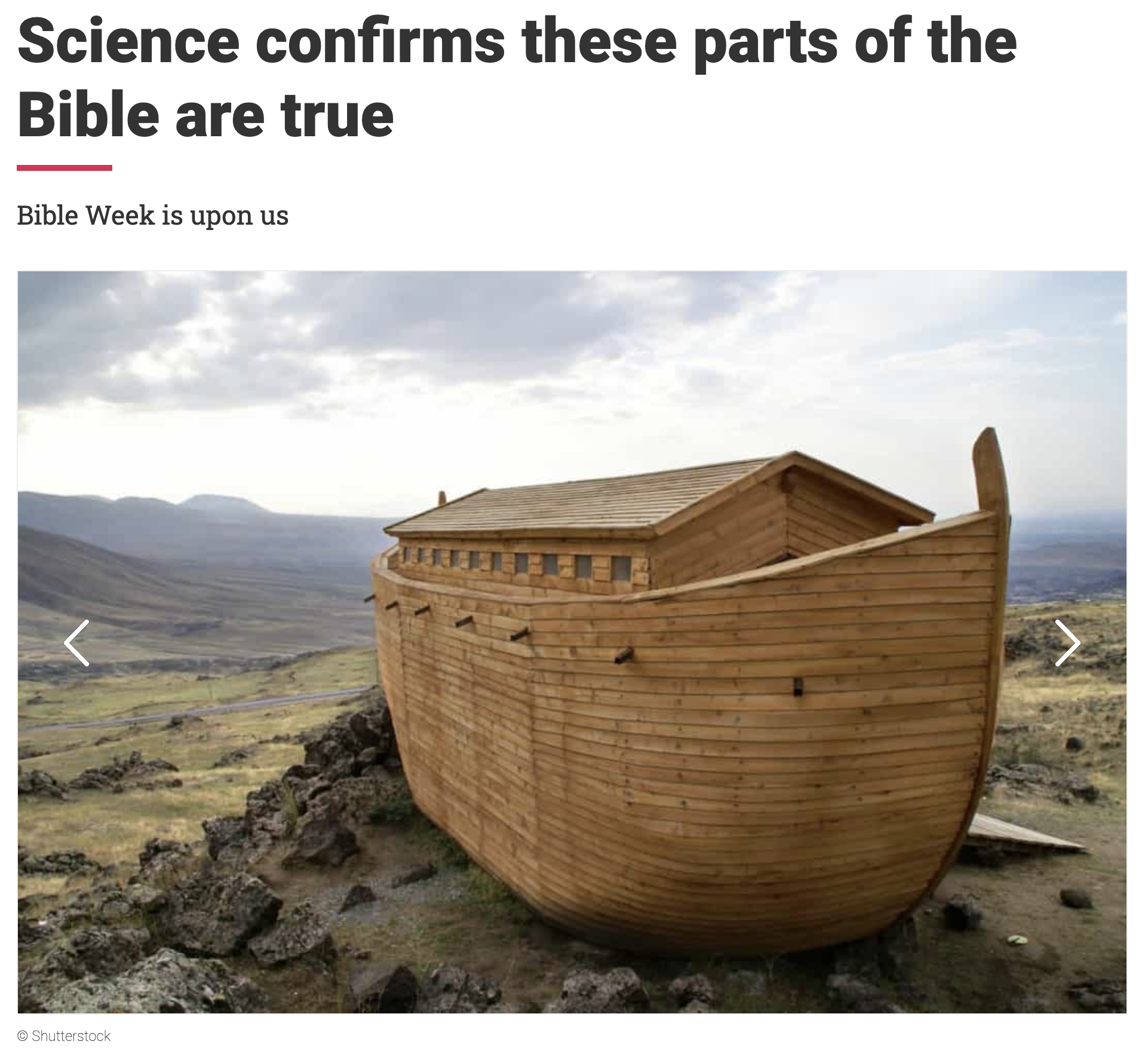 The quotes from the piece are indented. There are 23 of these; I’ll just pick ten or so.

While some conspiracy theories might say otherwise, science has confirmed the shape of our planet as round. This is also mentioned in the Bible: “He sits enthroned above the circle of the earth” (Isaiah 40:22).

Are you starting to note that what “science confirms” might be a wonky interpretation of Scripture? I interpret this to mean that the Earth is either a torus (doughnut) or a disk. A circle is not a sphere. Let’s move on:

The Great Flood and Noah’s Ark is one of the most popular stories of the Bible. And according to geological evidence, the Noachian flood might have actually happened.

Short answer: no, it didn’t. There may have been local floods, even big ones, but no flood that drowned humanity and all the Earth’s creatures.

According to Genesis 6:13-22, God’s instructions to Noah were as follows: “The ark is to be three hundred cubits long, fifty cubits wide and thirty cubits high.”

It couldn’t have worked for a gazillion reasons, and you could figure some out yourself. A wooden boat that large without metal would be unstable. How did the animals get to the Ark? Where did they house all the animals? What about giraffes and dinosaurs? What did they feed them? What did they do with the poop? How did the marsupials get from Mount Ararat to Australia? And so on. . . .

The best analysis of why the Ark couldn’t work is found on the National Center for Science Education’s website (click on screenshot); the article is pretty funny, too:

4). The universe is made of invisible particles –

Hebrews 11:3 reads: “By faith we understand that the universe was formed at God’s command, so that what is seen was not made out of what was visible.”

Umm. . . the interpretation of this is dead easy, and doesn’t at all imply atoms. It states clearly that God created the Earth from nothing. But a “Universe from nothing may be true from physics”, too, if you accept Krauss’s argument that “nothing” is unstable and particles could spontaneously arise from a quantum vacuum. But even if you don’t buy that, the assertion in Hebrews 11 doesn’t say anything about invisible particles.

5.) David could have actually defeated Goliath –

A slingshot might not be the most powerful weapon, but the stones from Elah Valley were made of barium sulphate, which is extremely dense and these would have easily hurt Goliath.

Note that now they’re arguing that science suggests that parts of the Bible could be true in principle, not necessarily true in reality. For what is the evidence for David and Goliath, who, according to the Bible, was 6 feet nine inches tall?  I couldn’t find out much about the geology of the Elah Valley, but I seriously doubt that all the stones there are made from barium sulphate.

David could have actually defeated Goliath –

But there’s more. Being a giant, Goliath likely suffered from acromegaly (overproduction of growth hormone). This can cause problems with vision, and peripheral vision can be limited, which would have been handy for David.

Jebus, but these people are really stretching things here. Maybe Goliath had acromegaly (unlikely given that he was a warrior and given he existed, for which we have no evidence), and it’s more likely that Goliath was facing David, not looking to the side.

Because an eclipsed occurred. Joshua 10:12 reads: “On the day the Lord gave the Amorites over to Israel, Joshua said to the Lord in the presence of Israel: ‘Sun, stand still over Gibeon, and you, moon, over the Valley of Aijalon.'”

This was most likely an eclipse, which researchers have dated back to October 30, 1207 BCE.

First of all, the Sun is always moving, rotating slowly around the center of the Milky Way. And it doesn’t stop moving during a solar eclipse, though the page with this “prediction” shows a solar eclipse.

Most of us are familiar with the Adam and Eve story of the Bible. Humans have, in fact, a female biological ancestor called Mitochondrial Eve, which precedes our species (Homo sapiens). There is, however, one thing that connects all us living creatures: blood.

Everything about this claim is wrong. First, not every animal has blood, for example flatworms, nematodes, and cnidarians (jellyfish and their relatives). This is also true of protozoans. Second, “Mitochondrial Eve” did not precede our species. This maternal ancestor of all present-day humans lived about 150,000 years ago, well after Homo sapiens arose in Africa around 300,000 years ago.

“For the life of a creature is in the blood, and I have given it to you to make atonement for yourselves on the altar; it is the blood that makes atonement for one’s life” (Leviticus 17:11).

Leviticus 11:28, for instance, says: “Anyone who picks up their carcasses must wash their clothes, and they will be unclean till evening. These animals are unclean for you.”

What about your HANDS? But if you read two verses earlier, “cleanliness” refers to which animals are considered by God to be off limits, not decaying animals that carry germs (unknown in Biblical times):

The carcass of any animal which divides the foot, but is not cloven-hoofed or does not chew the cud, is unclean to you. Everyone who touches it shall be unclean.

And whatever goes on its paws, among all kinds of animals that go on all fours, those are unclean to you. Whoever touches any such carcass shall be unclean until evening.

This all reminds me of the old version of “scientific creationism”, in which the facts of science were supposed to confirm the creation stories of Genesis.  Muslims, too, sometimes use wildly misinterpreted passages of the Qur’an to vouch for its scientific truth as well as its history (see discussion in Faith Versus Fact.).

Finally, what about all the parts of the Bible that science does not support at all but refutes: an instantaneous creation, simultaneous existence of Adam and Eve as our original ancestors, the slavery in Egypt and Jews wandering about in the desert for four decades, and the Census of Quirinius, which brought Joseph and Mary to Bethlehem. I could go on and on, but if you’re going to imply that the Bible is true because bits of it are true (and yes, some of the historical figures existed), you have, as Hitchens said, “all your work before you.” That’s because for every bit that’s true, there’s two bits that have been shown to be false.

44 thoughts on “For Bible Week: MSN News claims that bits of the Bible are scientifically true”