Today’s contribution is from regular Mark Sturtevant. Mark’s captions and IDs are indented, and you can enlarge the photos by clicking on them.

Let’s start with some damselflies.

First, this is a female fragile forktail (Ischnura posita) with its distinctive thoracic exclamation mark. This is a species I had been hoping to find for a long time, and here it turned up in my own backyard. 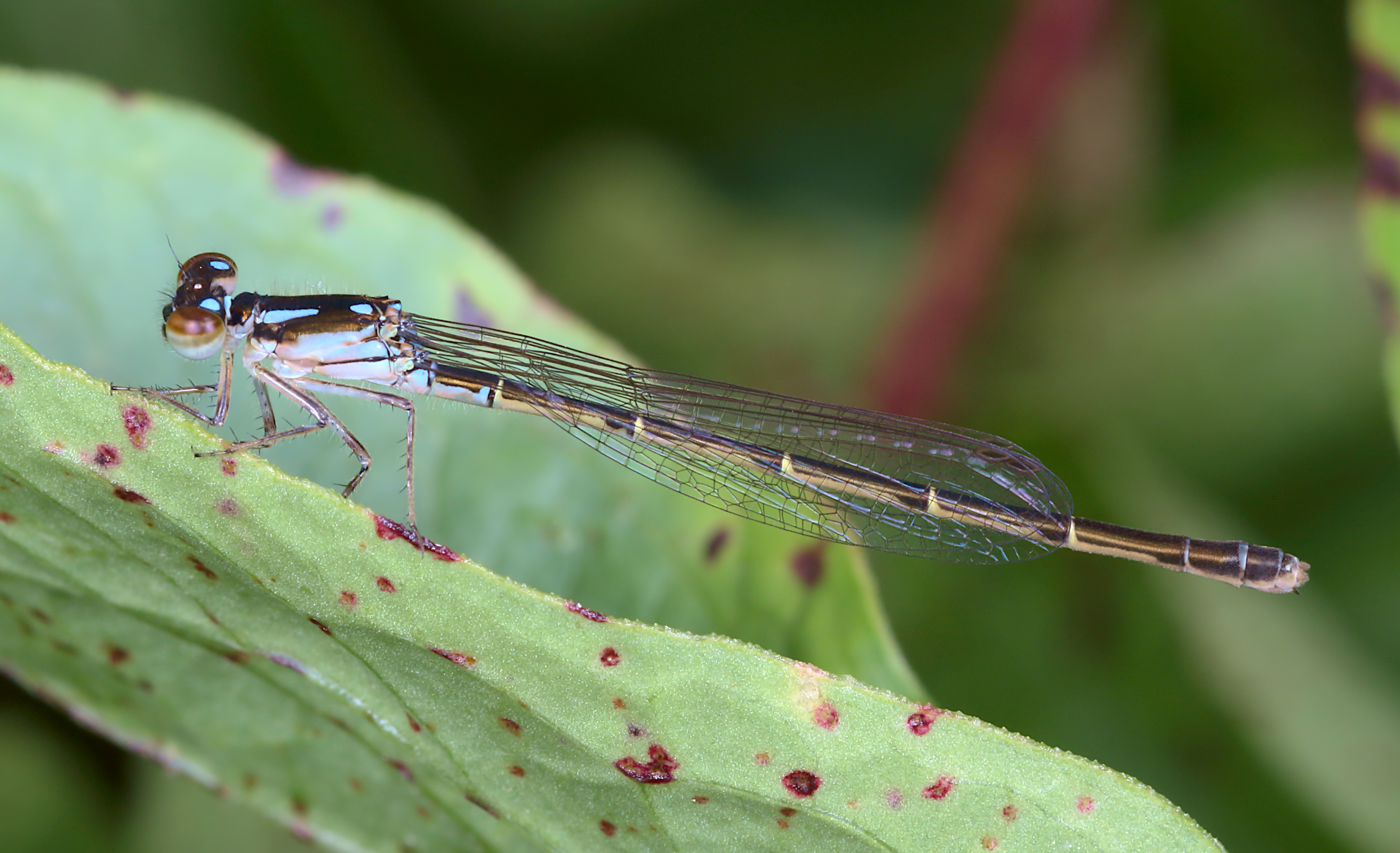 The damselfly shown in the next picture is a male variable dancer (Argia fumipennis). There are different subspecies of these, and this one is commonly referred to as the violet dancer for obvious reasons. 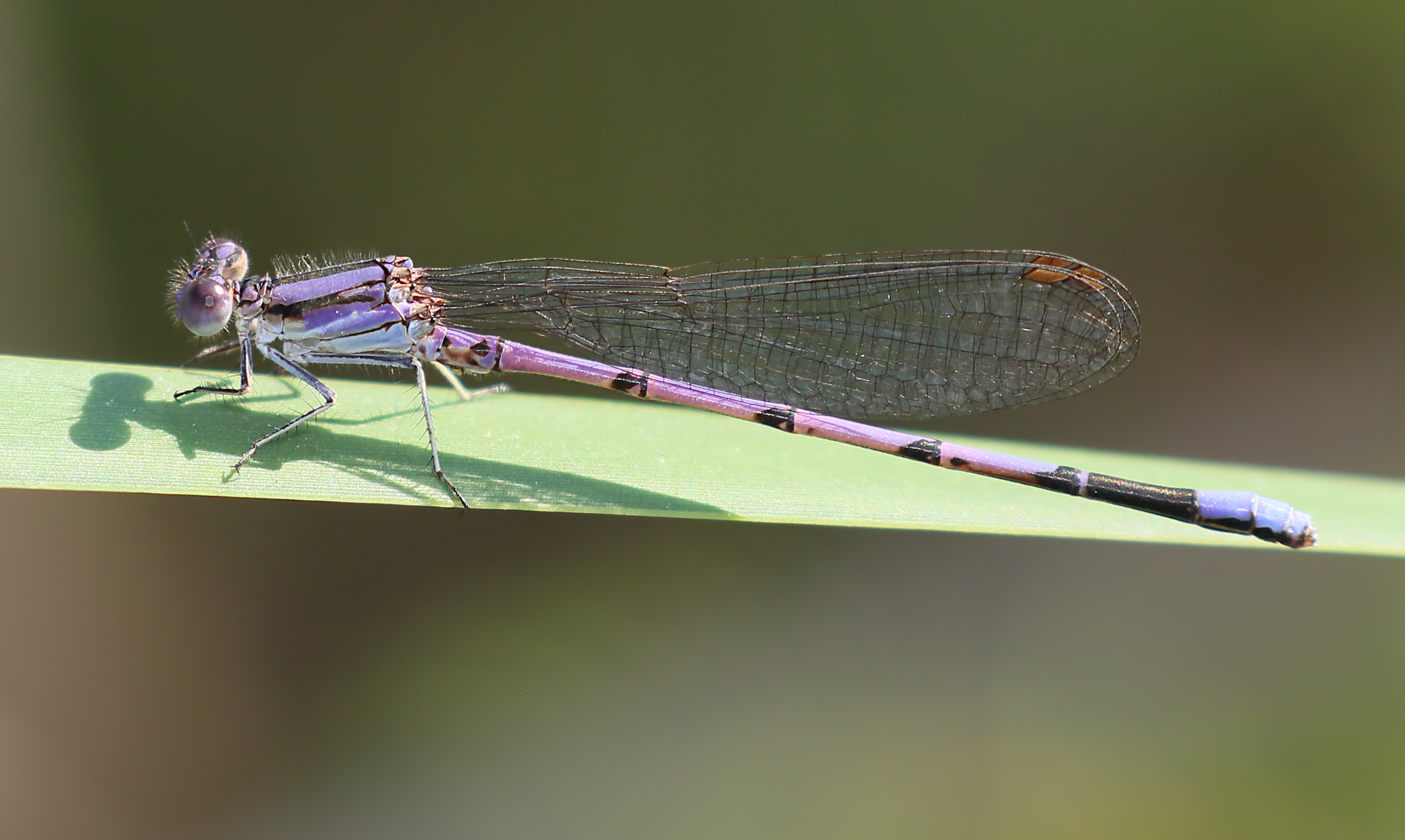 Next is a picture of a social gathering of ebony jewelwing damselflies (Calopteryx maculata). You can see several females busy laying eggs in the water, while the more deeply colored males are vying for mating opportunities. The picture itself is a bit of a fantasy, really, because it’s really a composite of several pictures, taken over several minutes at the same patch of river. I later stacked the pictures on top of each other, and then damselflies from the different pictures were “painted” into a single picture with the help of layer masks. The same trick may be done with birds gathering at a bird feeder. 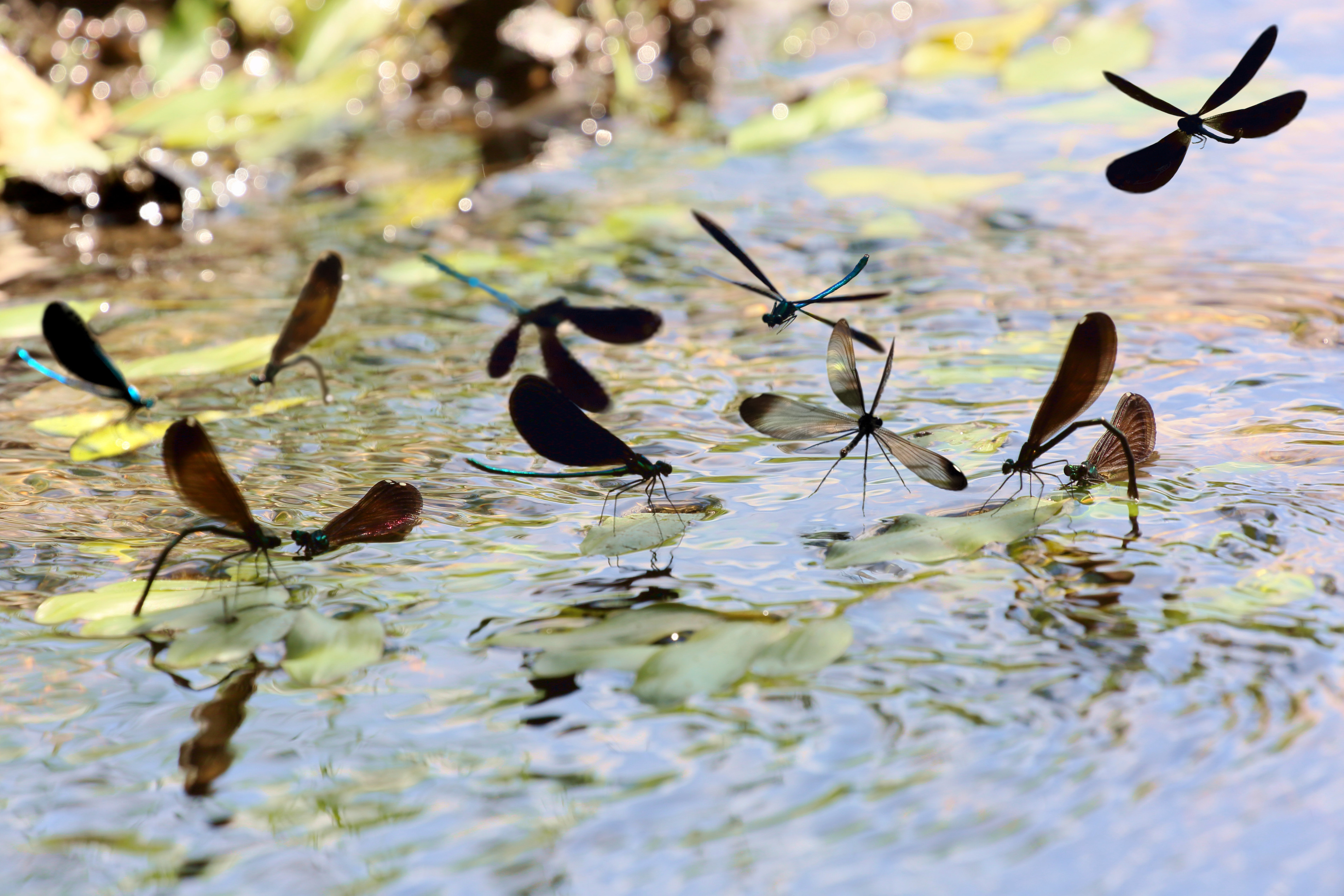 Our largest butterfly is the giant swallowtail (Papilio cresphontes), which is shown in the next picture taking up nutrients from damp sand. This behavior is called ‘puddling’, and is mainly done by males of many species of butterflies. It is known that they also transfer some of these nutrients to the eggs when mating, and I wonder if this is a sort of nuptial gift that is sought after by females. Notice the metallic green bee ‘photo bomb’. 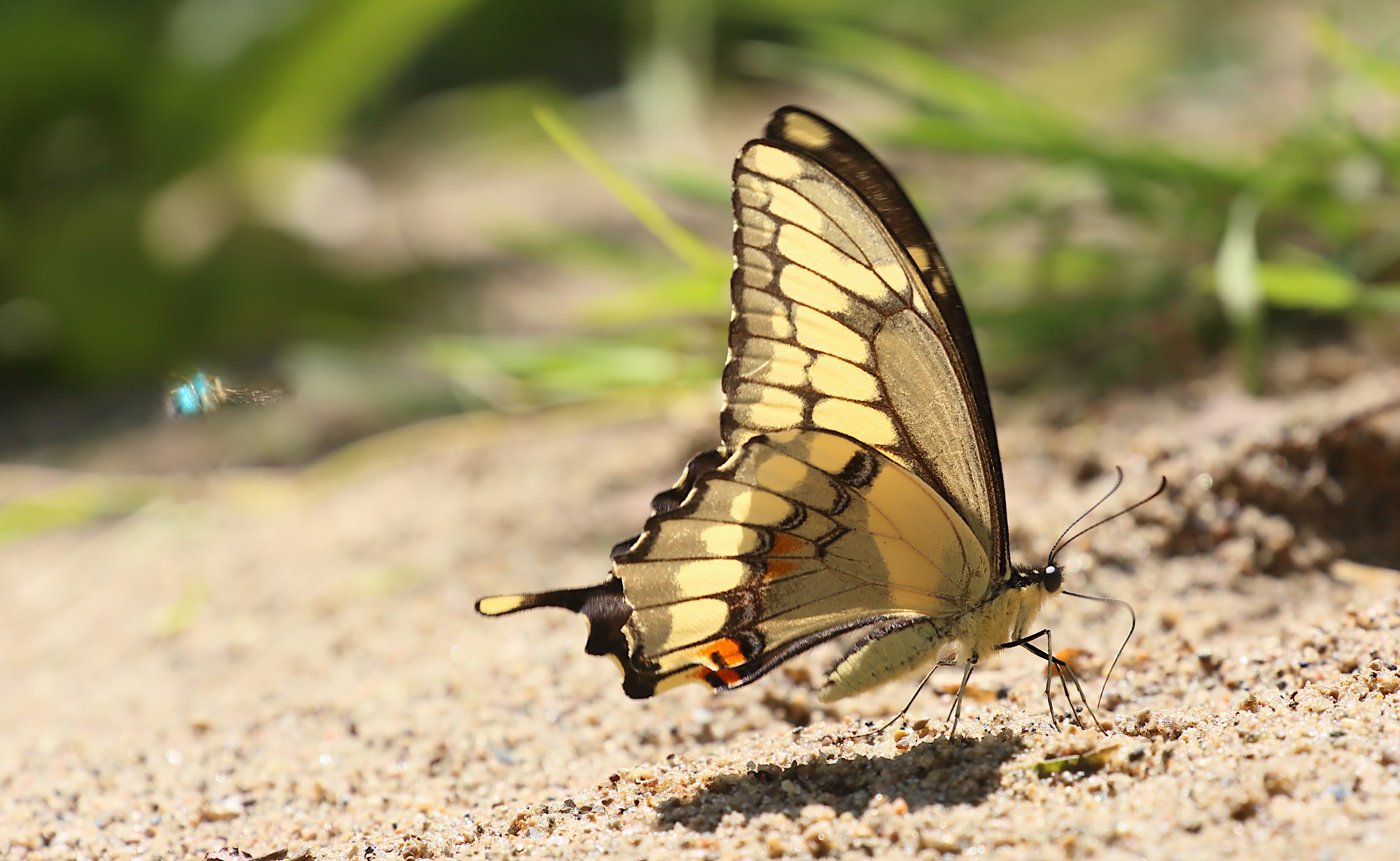 Next is a simple green lacewing (Chrysopa sp.). I had been intending to photograph one for a long time but never seemed to get around to it (it’s the same with honeybees for me). Anyway, the lacewing wasn’t interested in sitting for a staged shot as it kept flying to the window. So I photographed it there. I rather like the reflections. 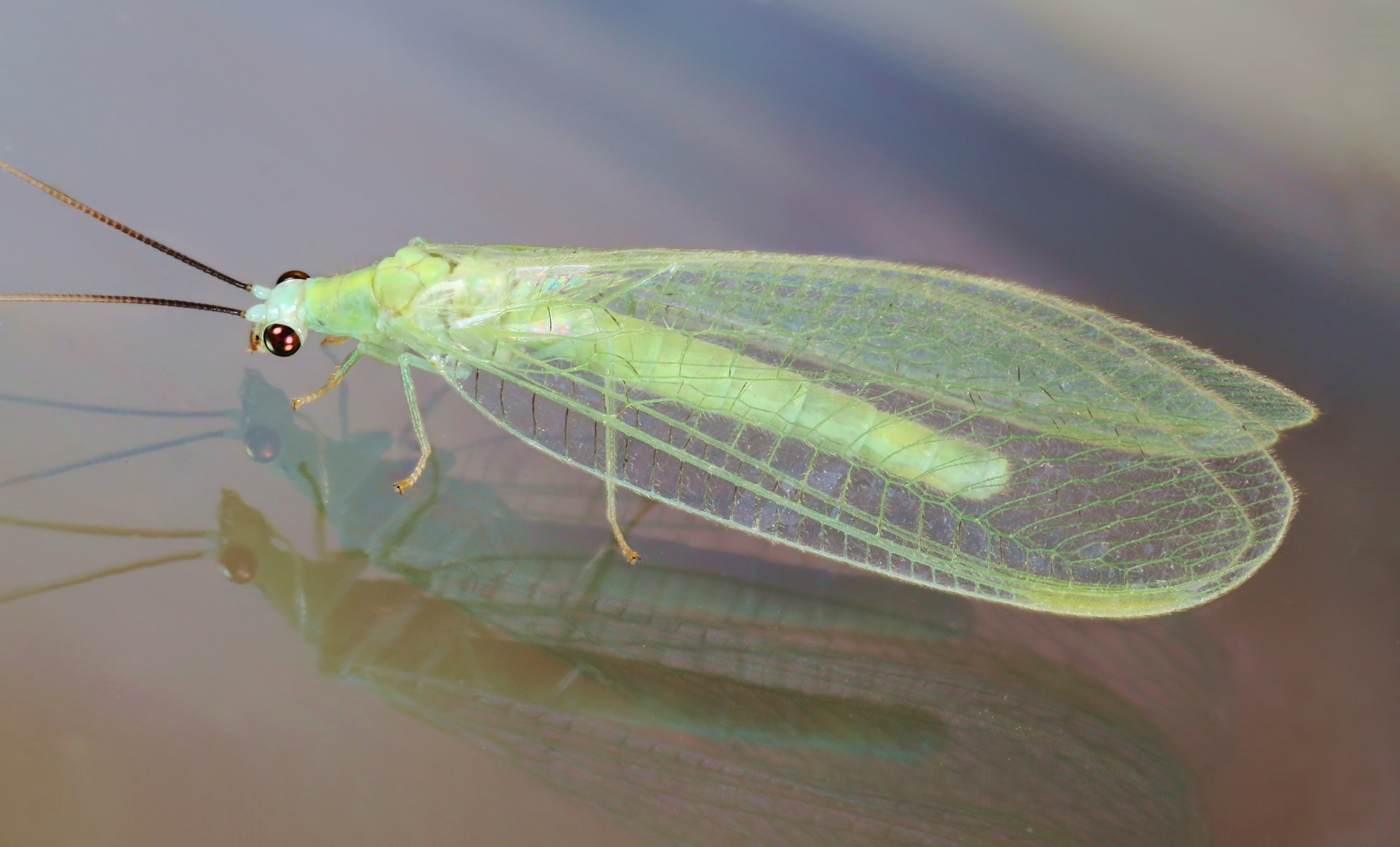 Like the last damselfly picture, the picture above represents an up-tick in my workflow for processing pictures. Here, various different adjustments were done with different copies of the same picture, and then the copies were blended together with layer masks.

Finally, the next series of pictures checks off something that has long been on my bucket list.  For me, one of the most coveted of all butterflies is the elusive mourning cloak butterfly (Nymphalis antiopa). They are no doubt very common, but these butterflies favor wooded habitats and they prefer to feed on sap flows from trees, which means they often forage well above eye-level. When I do see one it is usually flying somewhere in a great hurry. So mourning cloaks are among the most coveted of all butterflies.

Last summer I was delighted to find several mourning cloak caterpillars wandering in the backyard, looking for places to pupate. They probably had dispersed from the massive cottonwood tree that we have. So I collected them, and had a great time getting mourning cloaks off of my bucket list.

First up is a wandering caterpillar. 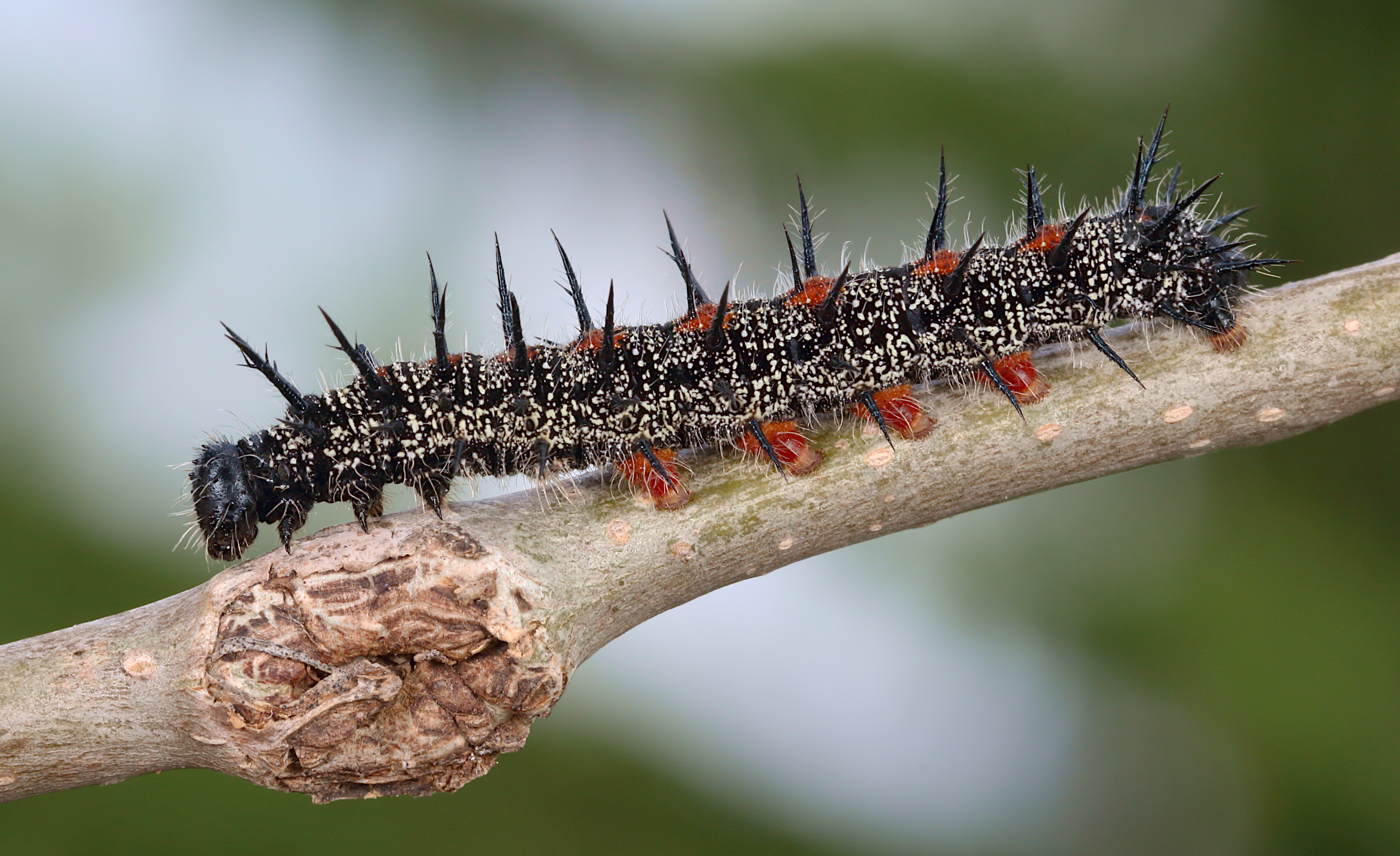 Next is a chrysalis. 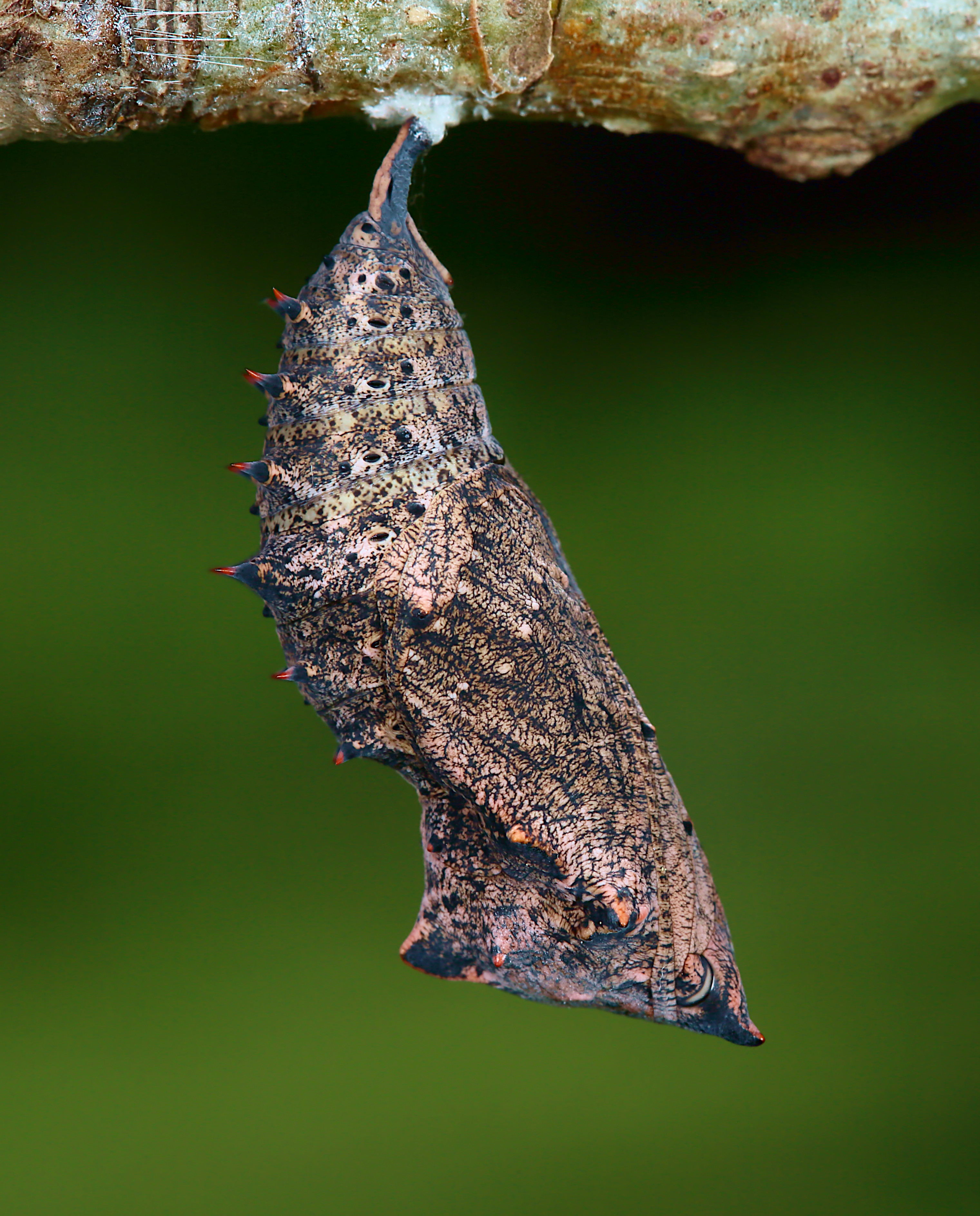 And finally, one of the recently emerged adults. After a butterfly or moth emerges and expands its wings, one can generally count on an hour or two where they are still not ready to fly, and their colors are at their brightest. It was pure joy taking these pictures. 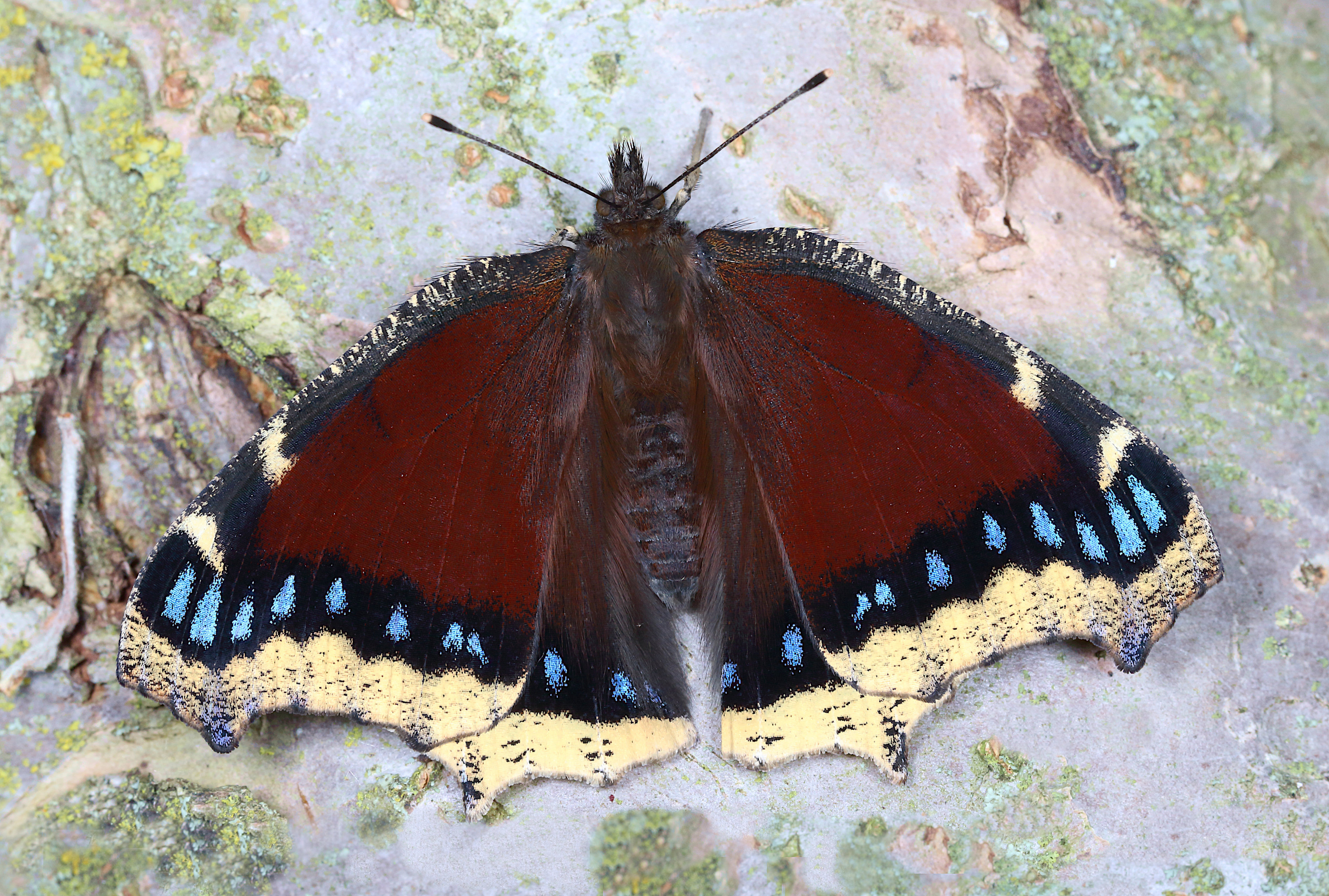 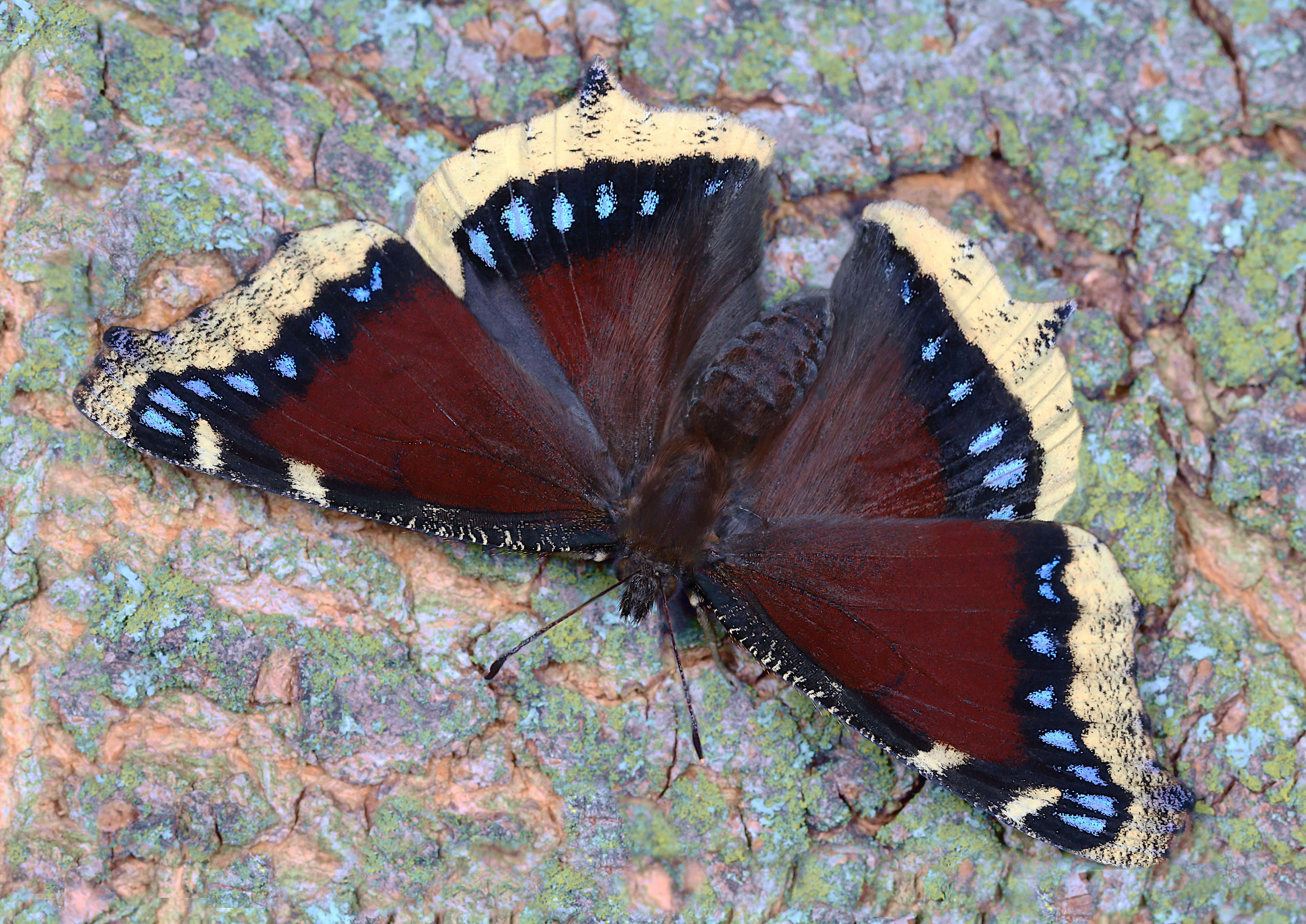 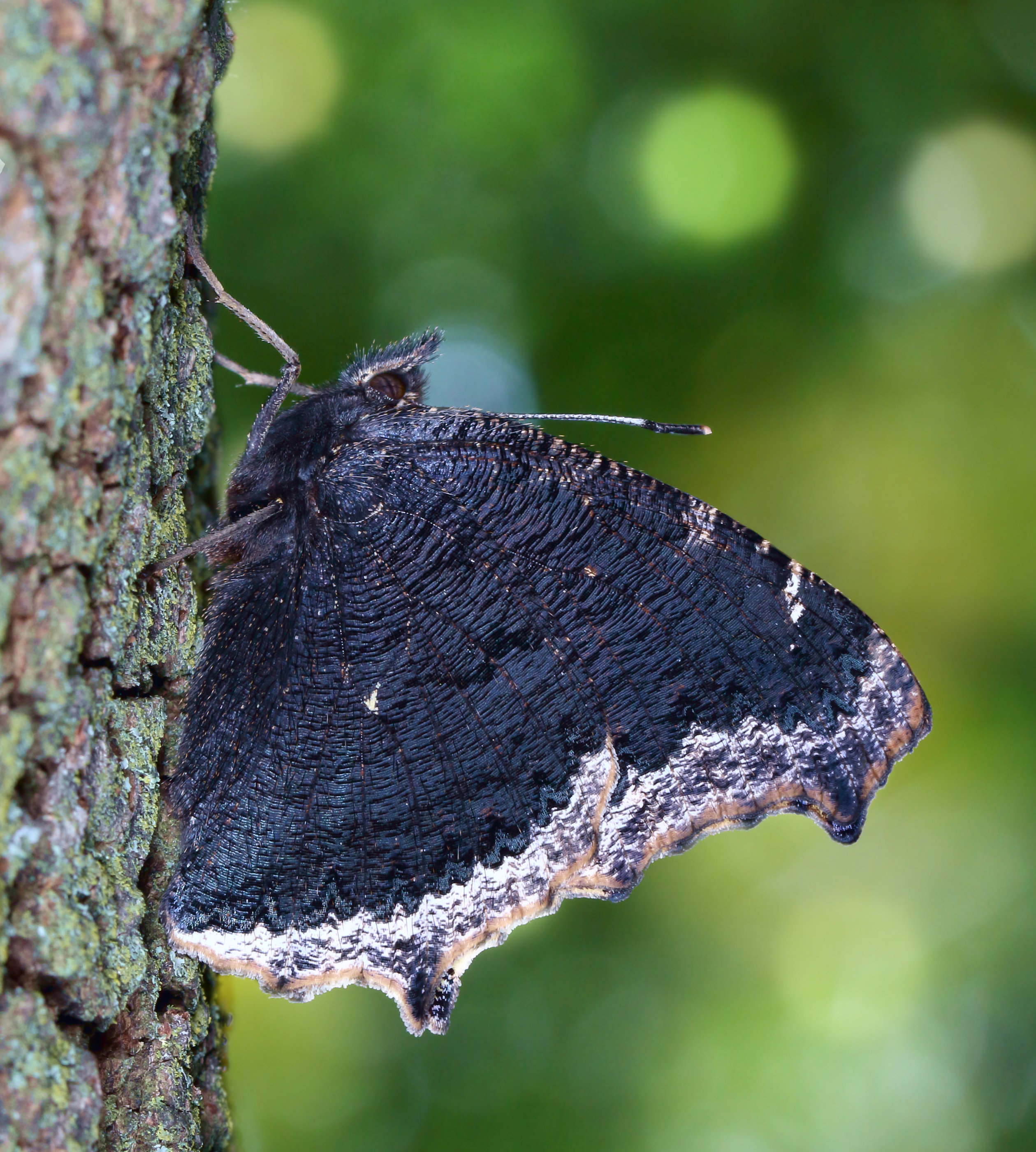 The last picture is bit of post-processing whimsy. I discovered that the program that I use (Gimp) has a ton of special effects filters, including a bokeh filter. So I put in a little bit of bokeh.