Do send in your photos, as the picture tank drains inexorably.

Today’s photos comprise a sequence of insect predation and parisitism taken by reader Mark Sturtevant. His notes, links, and IDs are indented.

The hobby of searching for and photographing insects can lead to discovering moments of drama that would otherwise go unnoticed. Here are pictures that document a moment of great injustice in an insect’s life.

During one outing in a place that I call the Magic Field, I noticed a small movement on the ground. It was a solitary wasp, and she was hard at work digging a burrow. No doubt she would later provision it with paralyzed prey for her larvae. This is Prionyx parkeri, one of the thread-waisted wasps. You can admire here the long spurs on her front legs, which were of great help as she diligently raked up and carried away sand from her burrow. 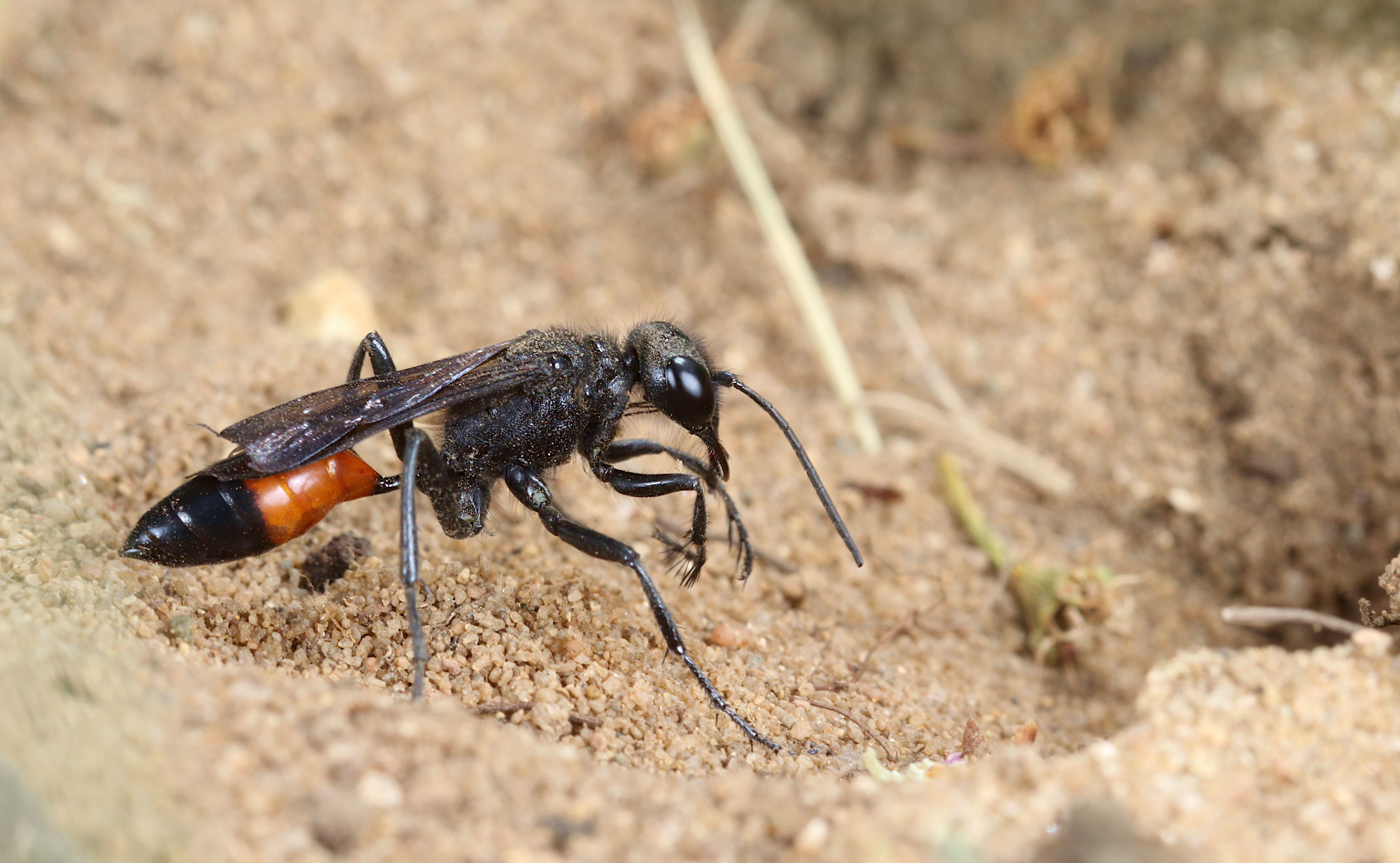 Burrowing wasps may have different enemies who would seek to take advantage of their industry, so they instinctively try to conceal their work. Here she is about to fly away with a load of sand from the burrow entrance. This is done to remove traces of freshly dug soil. 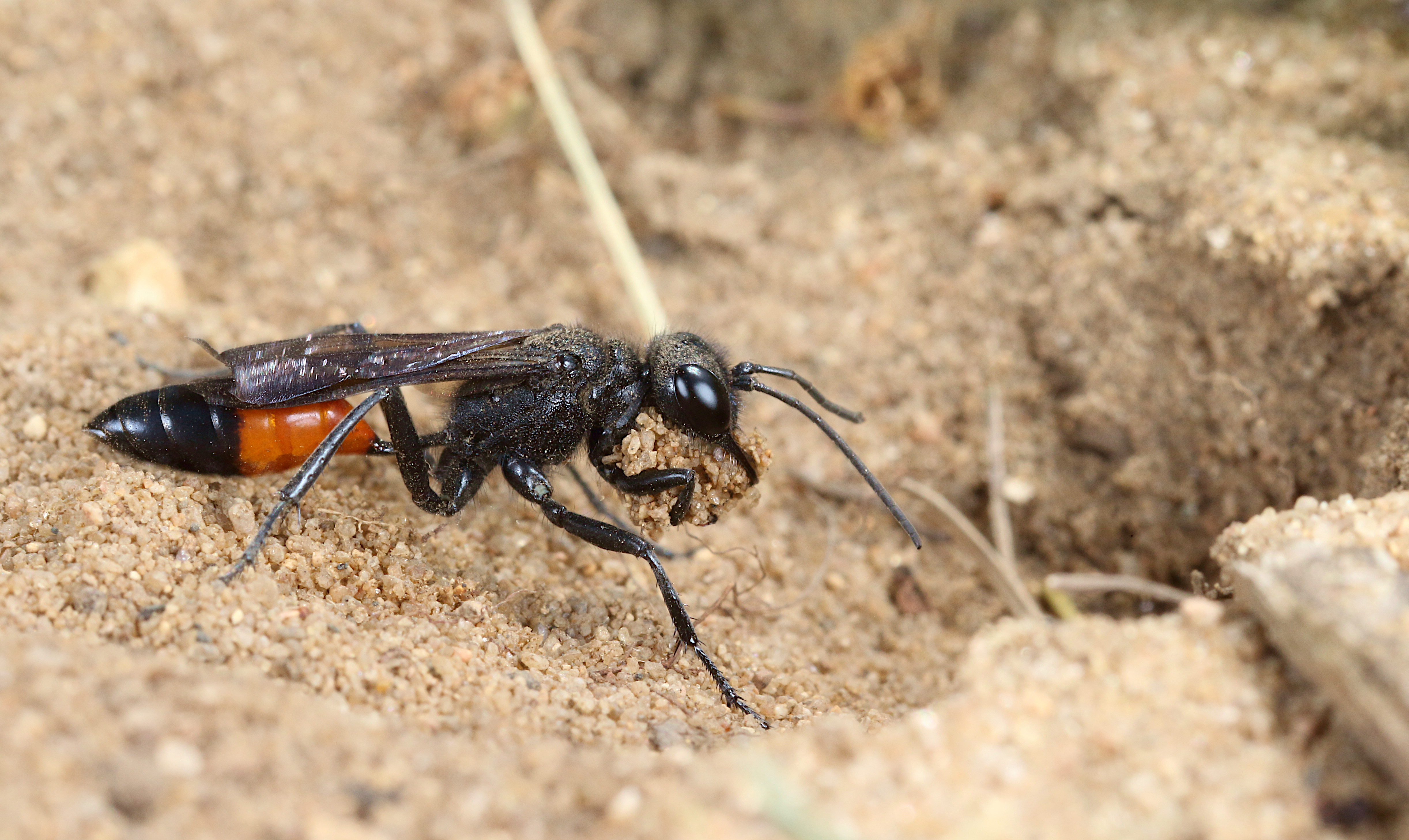 From this angle you can see that she has unusually elongated mandibles. This tells us that the prey she seeks will be paralyzed caterpillars, and that she will use those jaws to carry her prey much like how tongs would be used to carry a hot dog. But what is that fly doing there?? 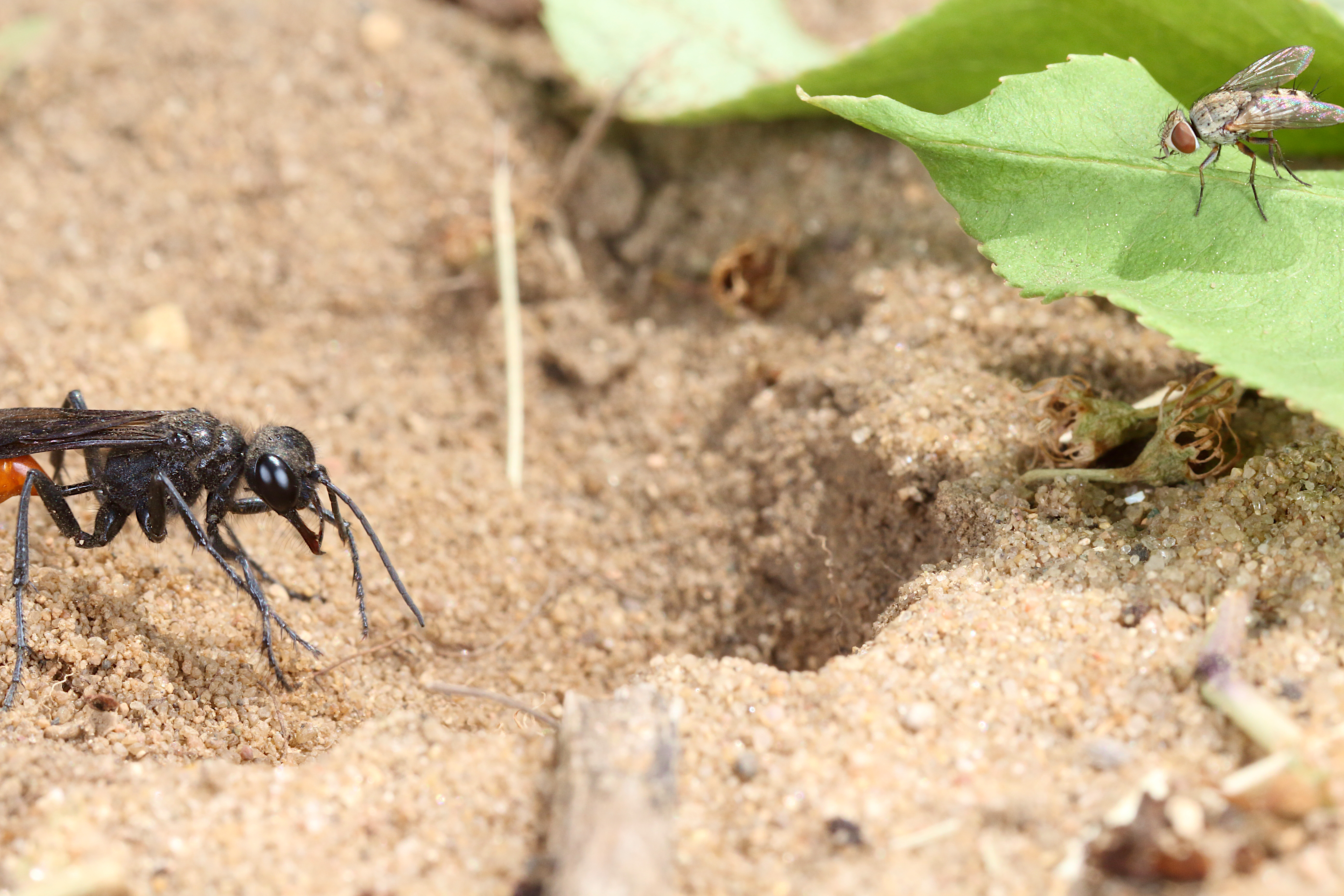 There were several of these flies. I counted four or five of them, all attentively watching her every move. 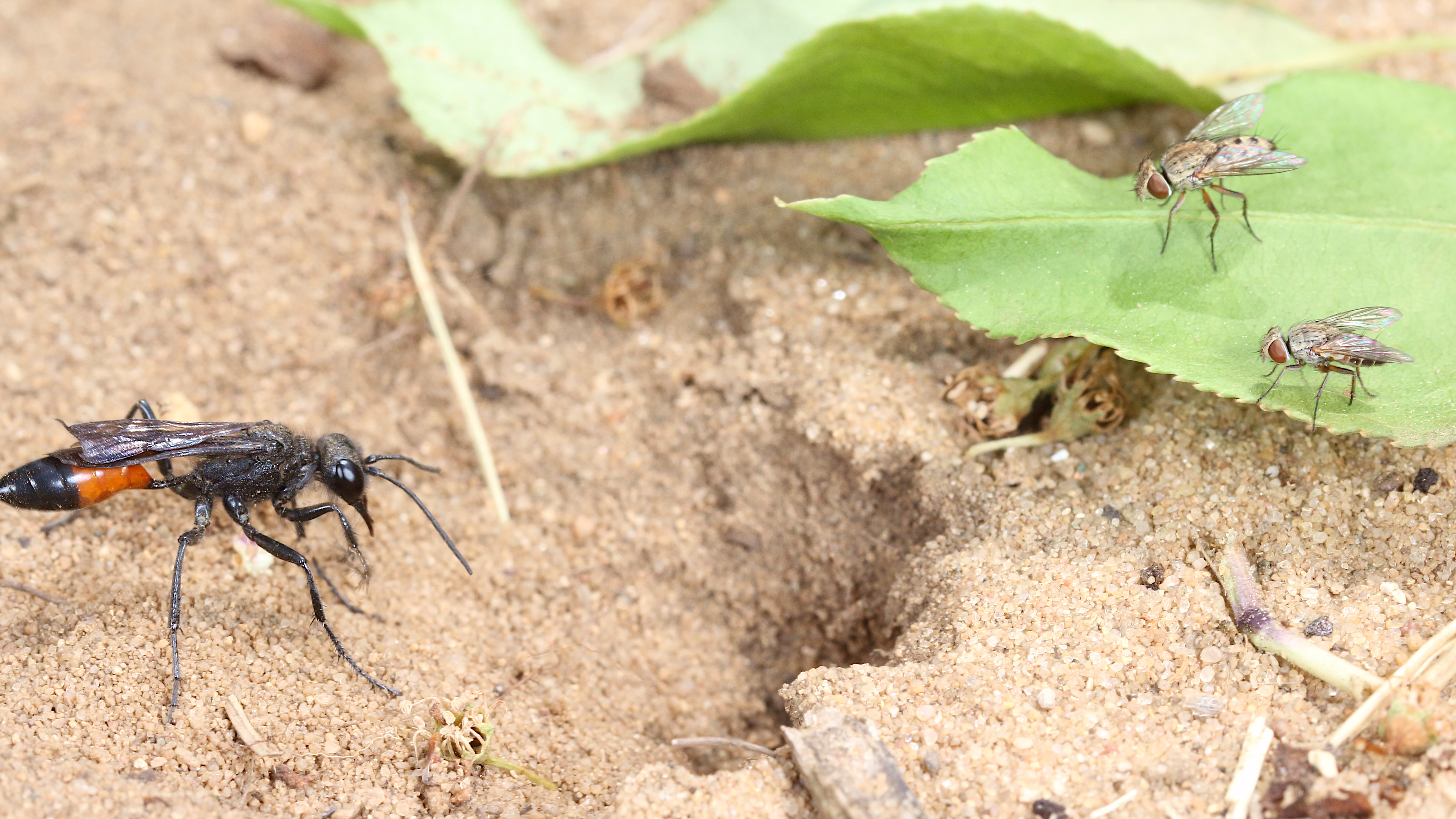 This is bad news! These are Tachinid flies, although I don’t know the species. Parasites. More specifically, they are kleptoparasites, meaning that they intend to lay eggs on her paralyzed prey. Her motherly labors are not finished and her young are not yet born, and yet they are doomed.

I watched in fascination. After she cleared out the entrance, she then left. I did not understand until now that her burrow was actually finished, and that she was simply unplugging it to stock the burrow with new prey that was hidden nearby. In about a minute I could see her making her way back with a paralyzed caterpillar. Every twig and tuft of grass was a barrier, and her tireless efforts seemed a Sisyphian task.

She set down her prize at the entrance, and disappeared inside for what I suppose were final preparations. I wish I had managed to take more pictures here, but I had to ration the battery charge on the flash 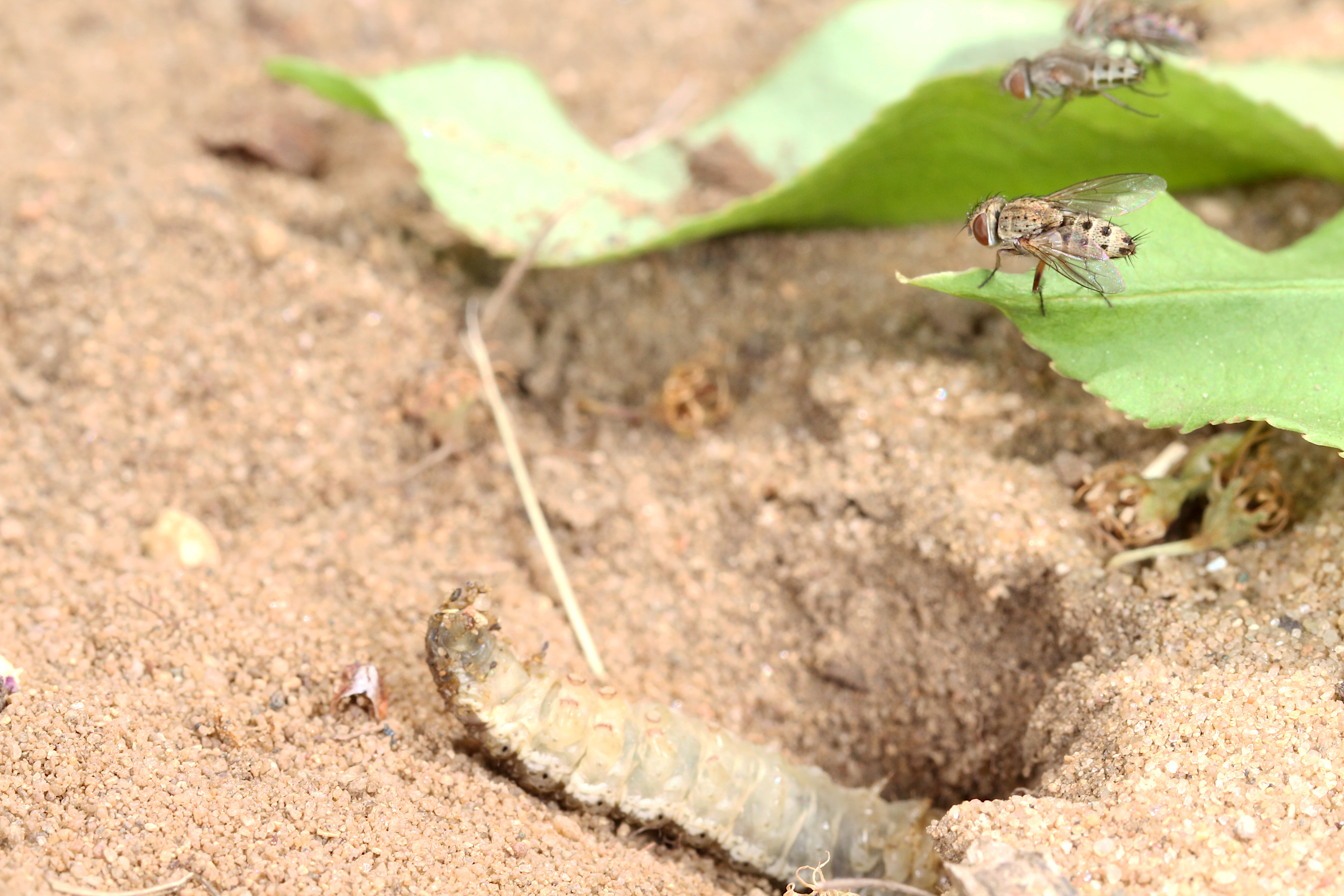 Immediately, one of the flies made its move. It landed on the caterpillar and inserted an egg onto it. You can see it if you look closely. 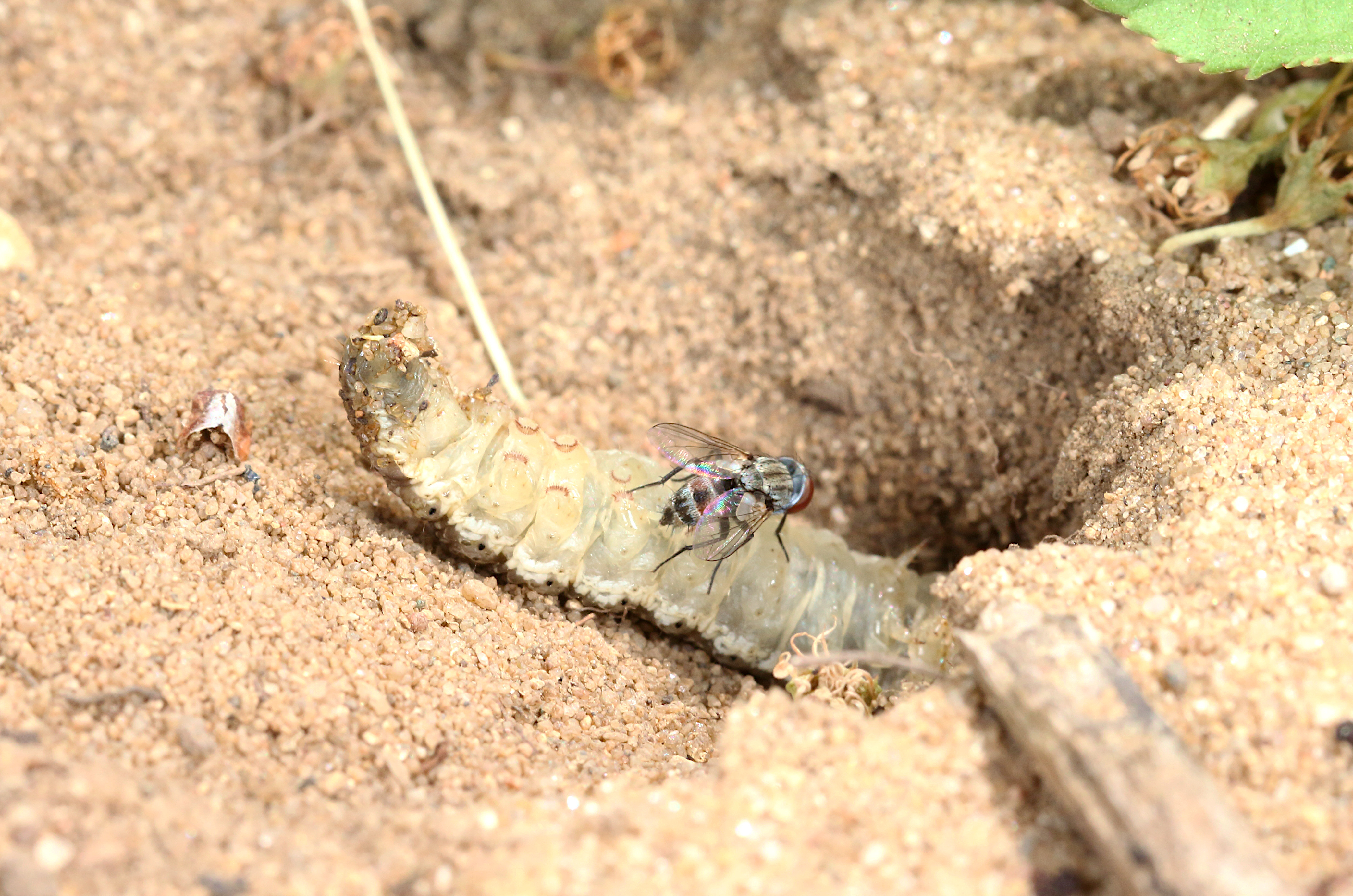 The flies immediately backed away when she emerged. She moved the caterpillar inside, and after a time re-emerged to then carefully conceal the entrance before leaving. The flies continued their watch. 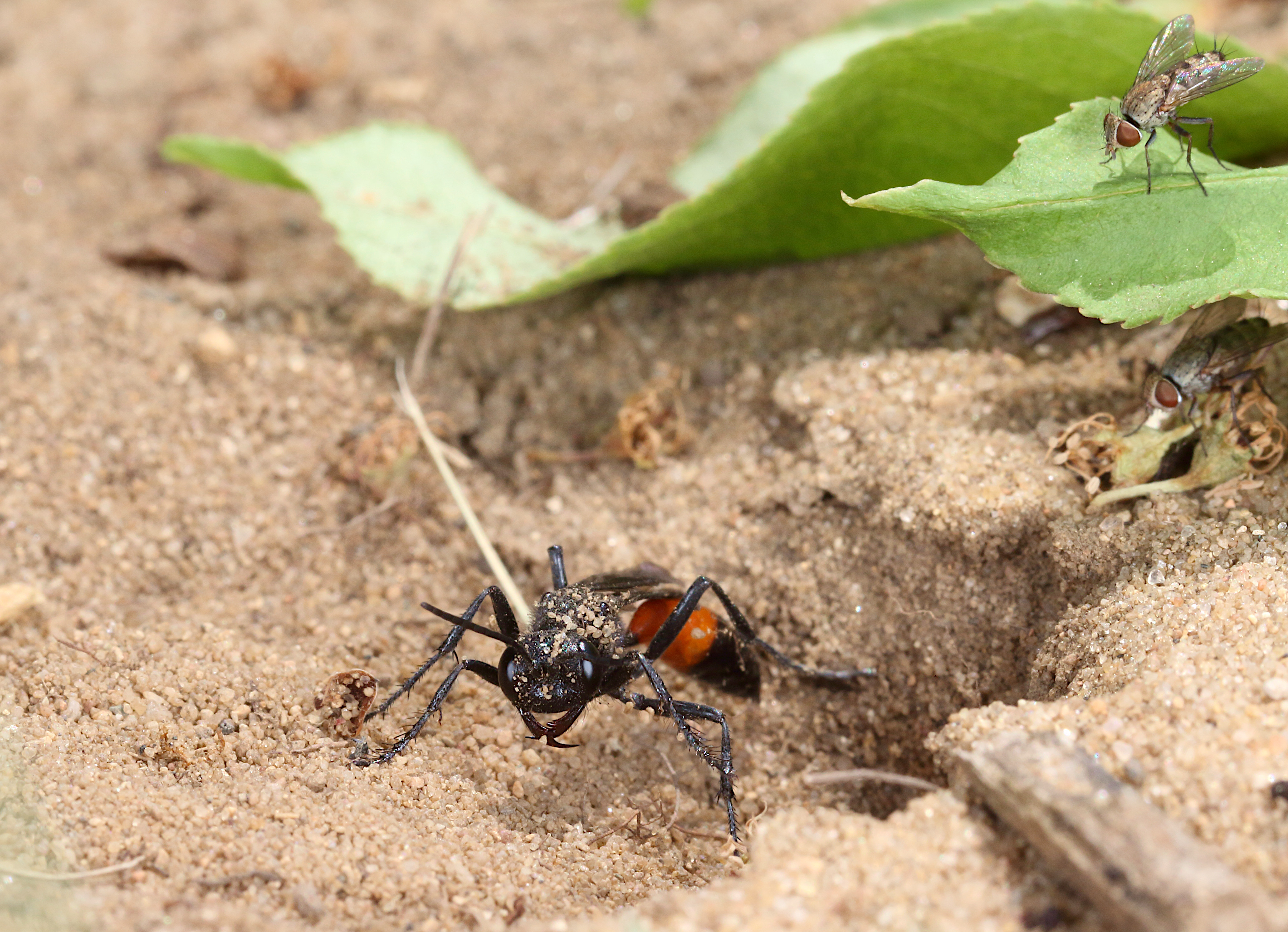 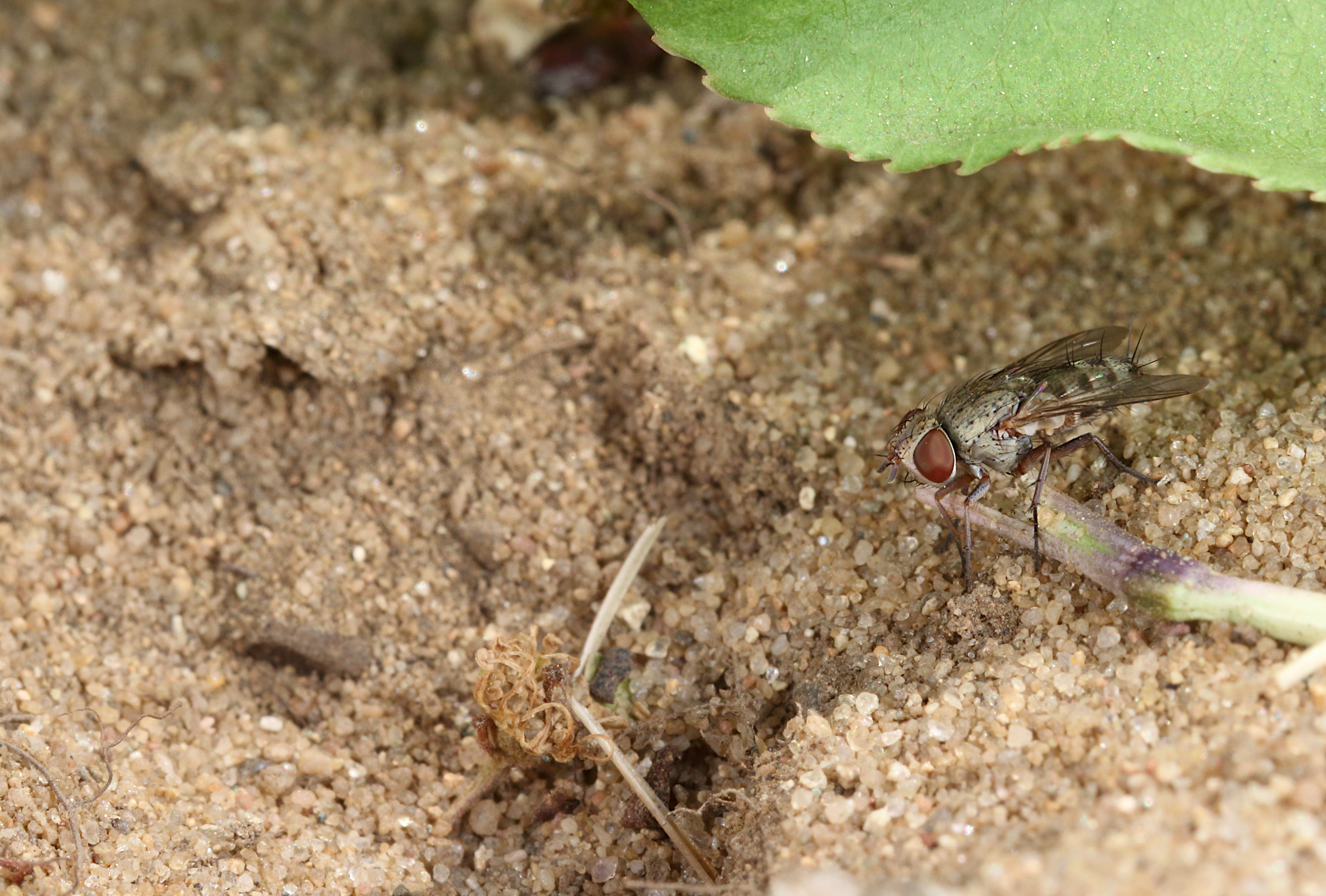 Solitary wasps of this sort will make a burrow, but branching from it will be several individual chambers, each with a prey item and one egg. The remaining flies likely have good reason to continue lurking around this burrow entrance because the wasp will likely return with new prey for them.

I do regret not recording this scene as a movie with the camera, as that would have ensured that more details were captured. But the microphone would have also recorded a rather continuous stream of profanities from a grown man, face down on the dirt, who was very upset at some of the drama that probably happens every day in the Magic Field.