The photo situation is DIRE. Send in your good photos. I am not crying wolf here.

Today, though, we have a photo sequence of a robber fly taken by Emilio d’Alise. Robber flies are in the dipteran family Asilidae, and are all predators, many of them vicious.  As Wikipedia notes, “they feed mainly or exclusively on other insects and, as a rule, they wait in ambush and catch their prey in flight.”

Emilio’s captions are indented, and you can enlarge his photos by clicking on them.

One fine 2014 July day, while squatting next to one of the lawn ornaments and snapping away at a flowering carnation plant, I head a sudden and loud noise — like a miniature outboard motor — right next to my face.

I’m not afraid of insects, really I’m not. I have an Official Bug Transport Vehicle (a.k.a. yellow Solo cup) I use to relocate various insects from inside my house to the great outdoors. Spiders, centipedes, multilegged, multi-eyed, small, large, it makes no difference to me; I capture them, and release them outside.

But I’d never seen one of these, and the first thing I thought was “GHOUL!”

Before I go onto the rest of the photos, please look at the photo below carefully . . . that white thing that looks like the bug’s face? Not the bug’s face, but another bug; one it had just caught. 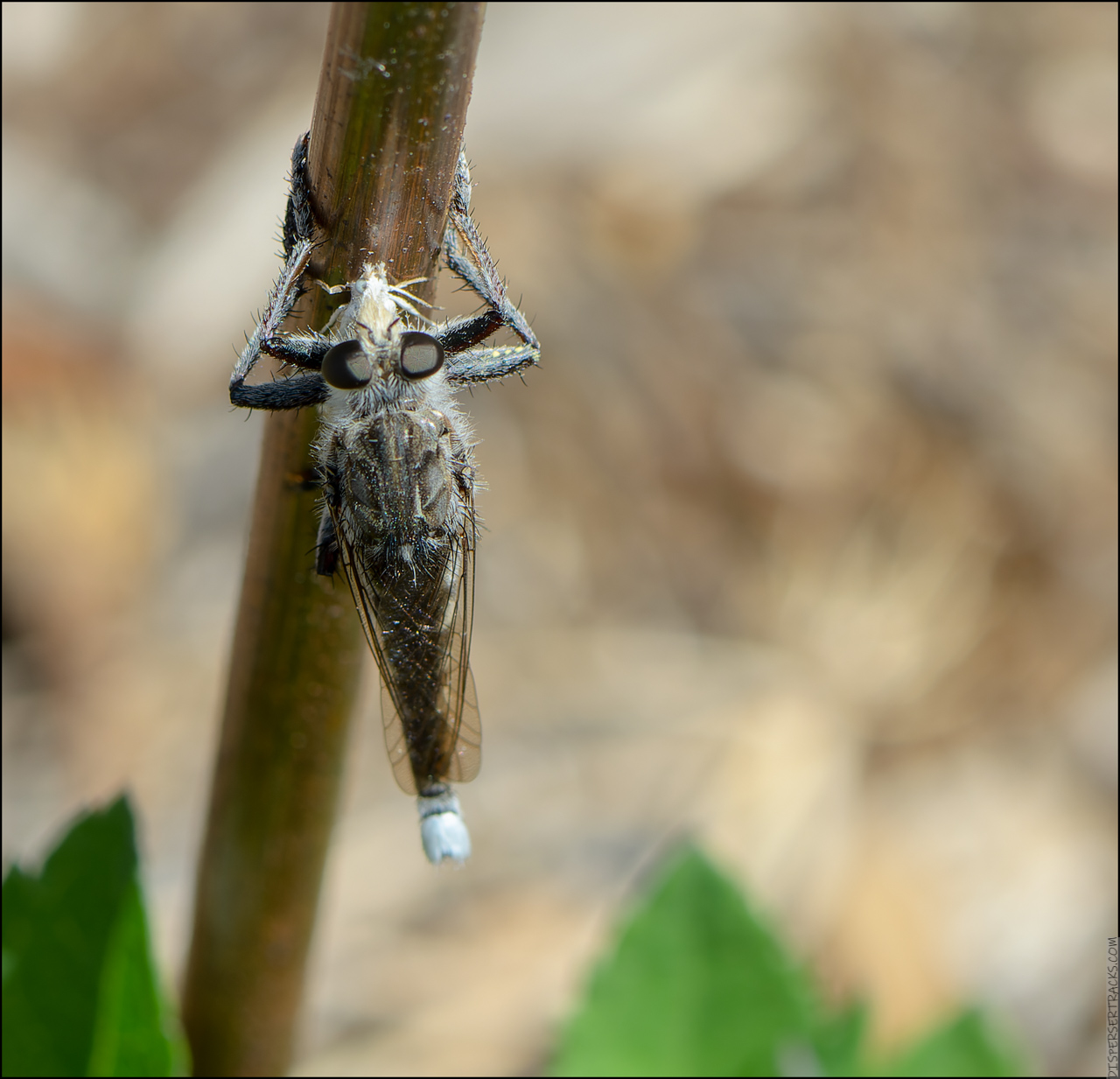 Now, as I was shooting this, I had not noticed the other bug. I thought it was all one bug. I didn’t even notice the other bug when the Ghoul did this (sorry for the blur, but this thing was fast!) . . . 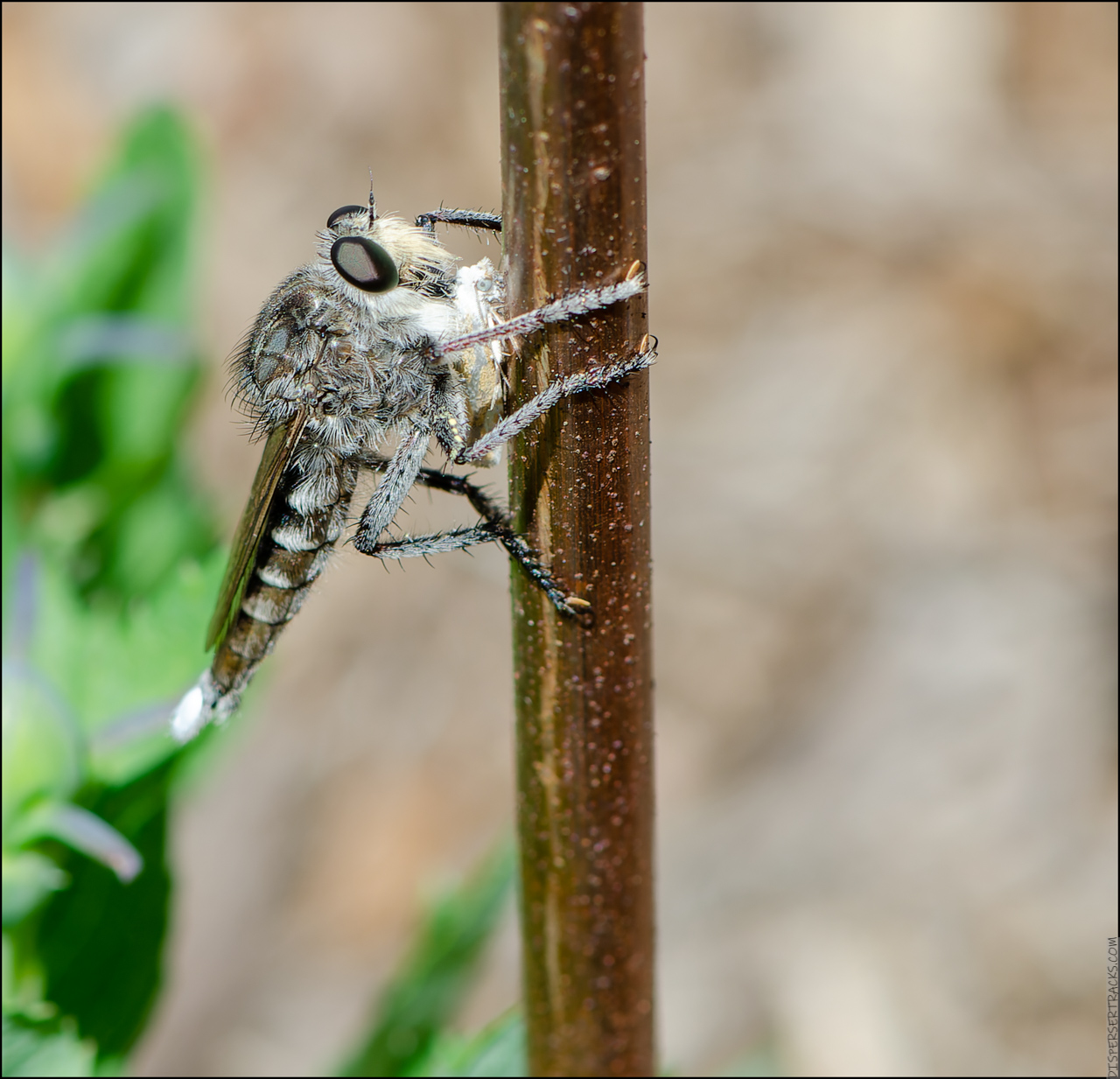 . . . and moved to the other side of the copper stem of the ornament. And let me tell you again; these things are FAST! 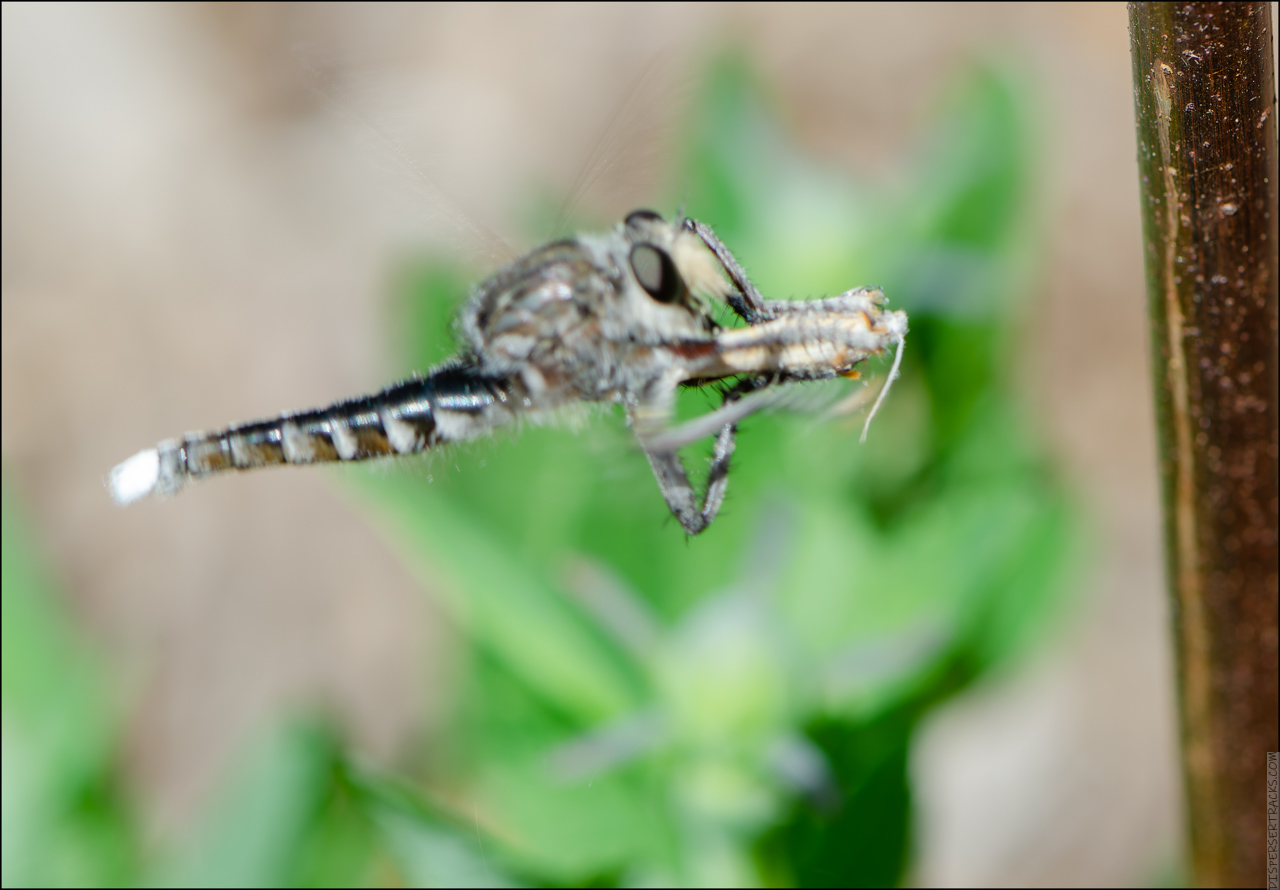 That’s when I noticed the captured bug, mostly because it was still alive and moving. The Ghoul had repositioned it so it could feast on the juicy parts of the unfortunate victim.

OK, so it’s not a ghoul (appearances aside) . . . it’s a Robber Fly. You can find more information about Robber Flies — a.k.a. the Assassin Bug — at this LINK.

I was worried it might fly off, but I risked repositioning to get a better shot (I had switched to shooting for speed, so I have a shallow depth of field).

I need not have worried; this thing was content to sit there and suck on its poor victim, which at this time was still moving . . . Let me tell you, I was glad this thing already had a meal as that’s one gruesome way to go. 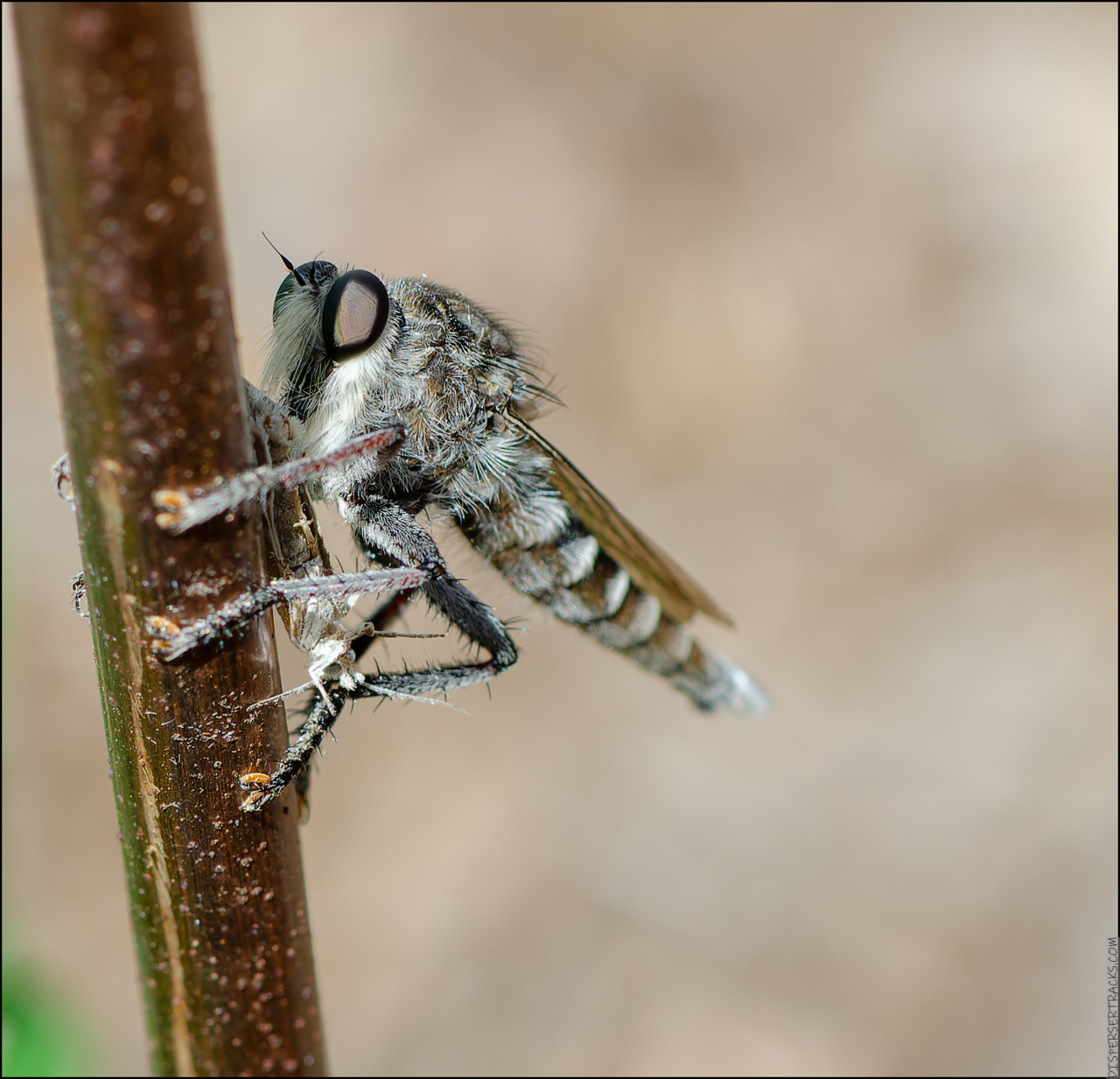 The write-up says that  the Robber Fly is a medium-to-large bug, up to 5 cm – that’s two inches, and I estimate this thing to have been all of that.

In a few of the photos you can clearly see the “short stout proboscis enclosing the sharp, sucking hypopharynx” (text from Wikipedia). 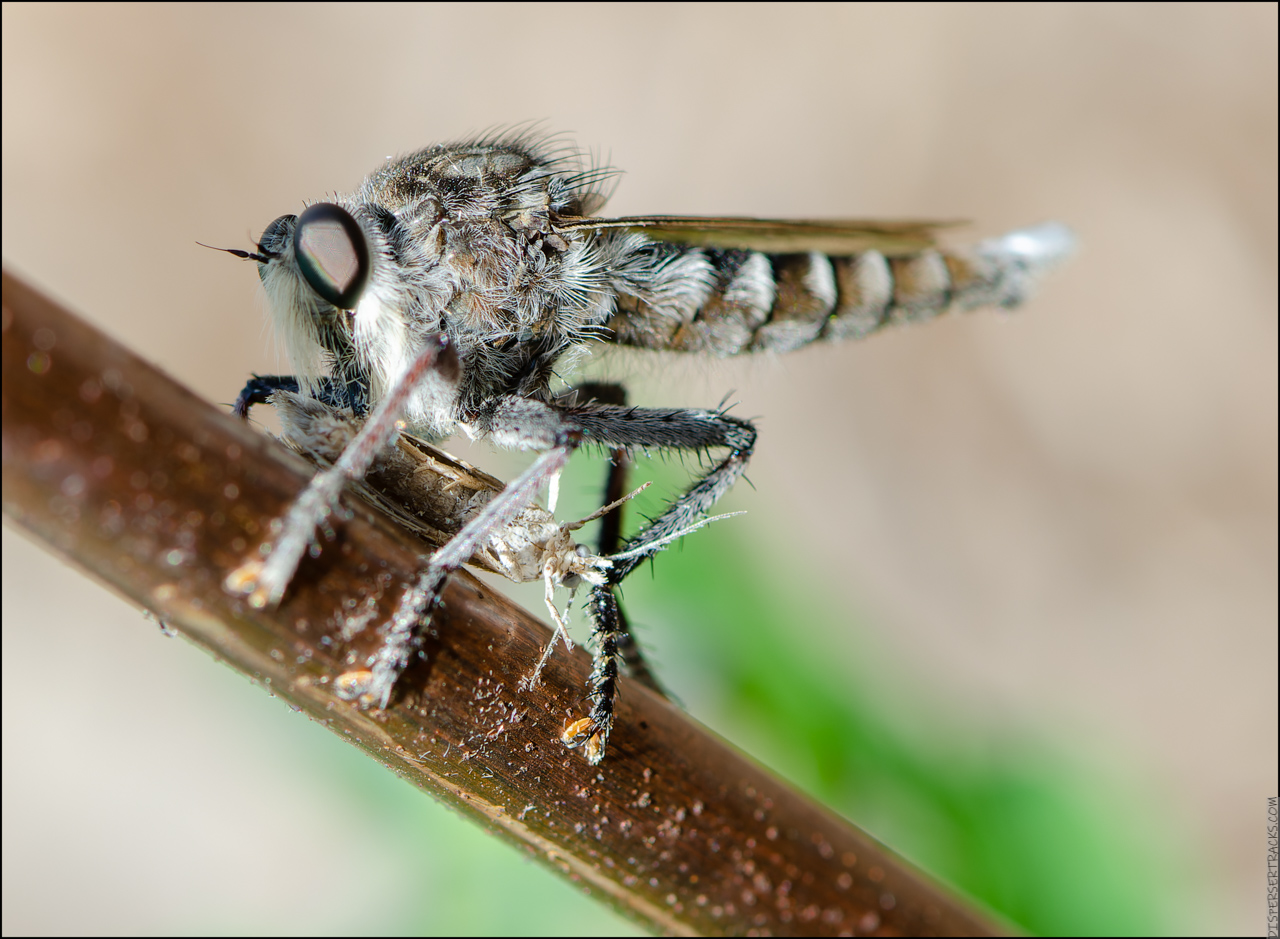 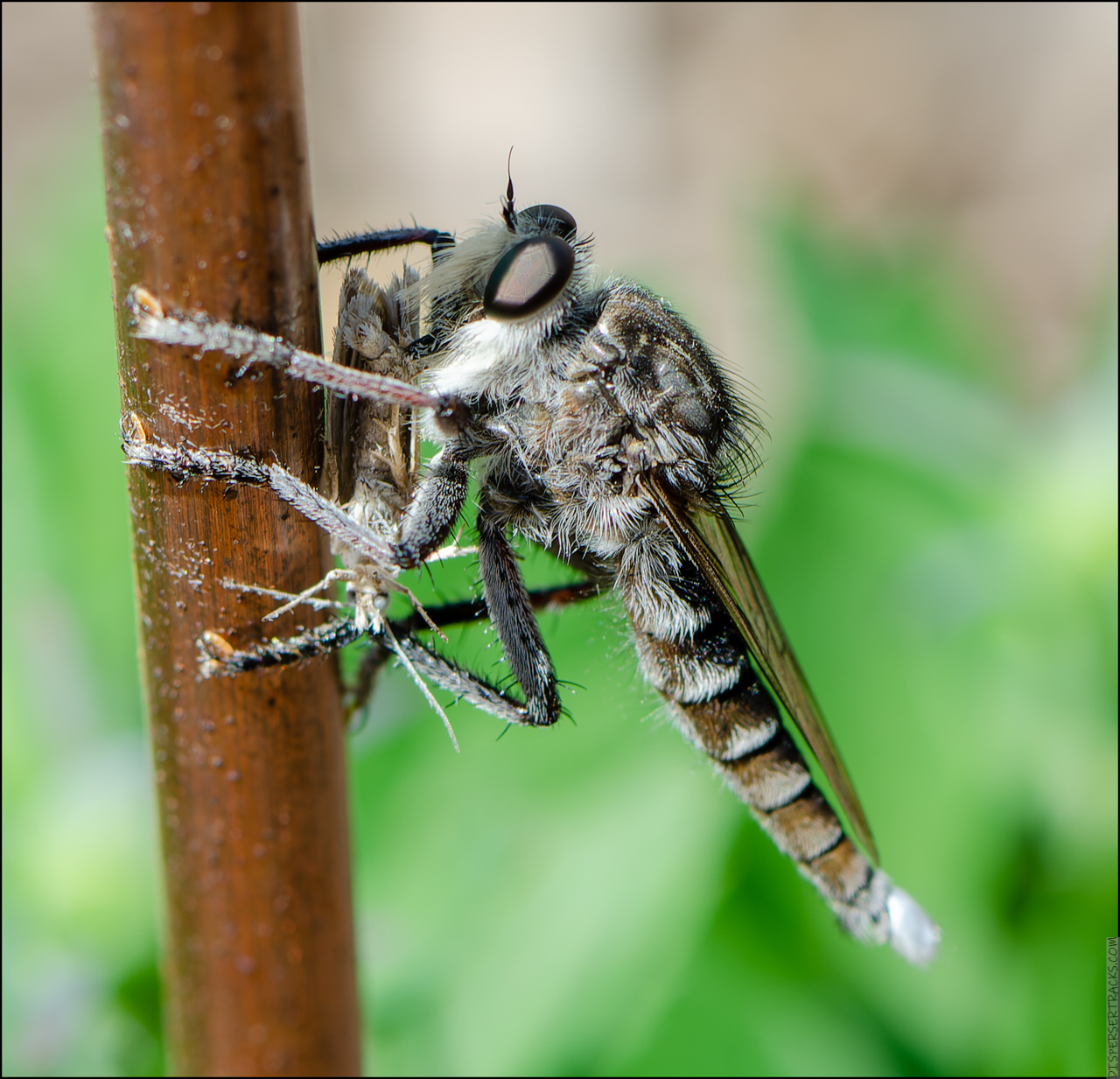 I risked getting closer, and in a blur and outboard-motor noise, it flew off. Did I mention these things are FAST? I mean, it makes sense since they are predators . . . but when I say fast, I mean it crossed my yard, the road, and was lost from sight in something like a second and a half, maybe two.

I had never seen (or heard) of a Robber Fly before that day, but once I was familiar with the sound of their wings, I saw more (but smaller) whenever I went weeding, when I cut the grass, and when I watered the plants. In all, four or five times during the next week or so, but without the opportunity to snap more photos . . . until I went out to get the mail one day, and there were two smaller (about an inch and a half) on the concrete drive.

I snapped a few quick photos with my phone but since they didn’t seem interested in moving, I went and got my DSLR.

This shot below shows the female of the pair.

How can you tell it’s a female? I seem to remember reading the males have a white tuft on their rear end (I can’t remember where I’ve read that or I’d link it). If I’m wrong, please correct in the comments. 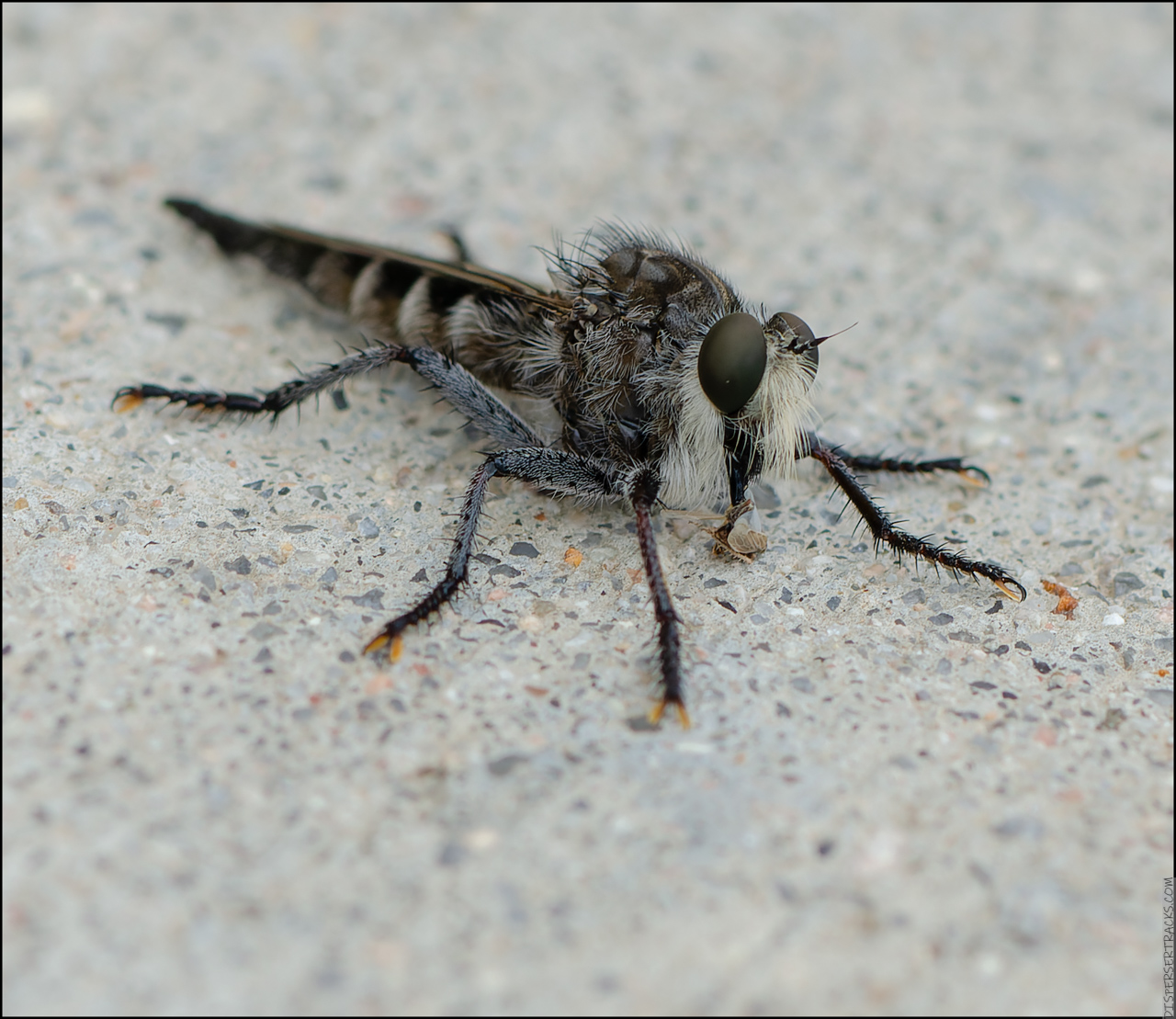 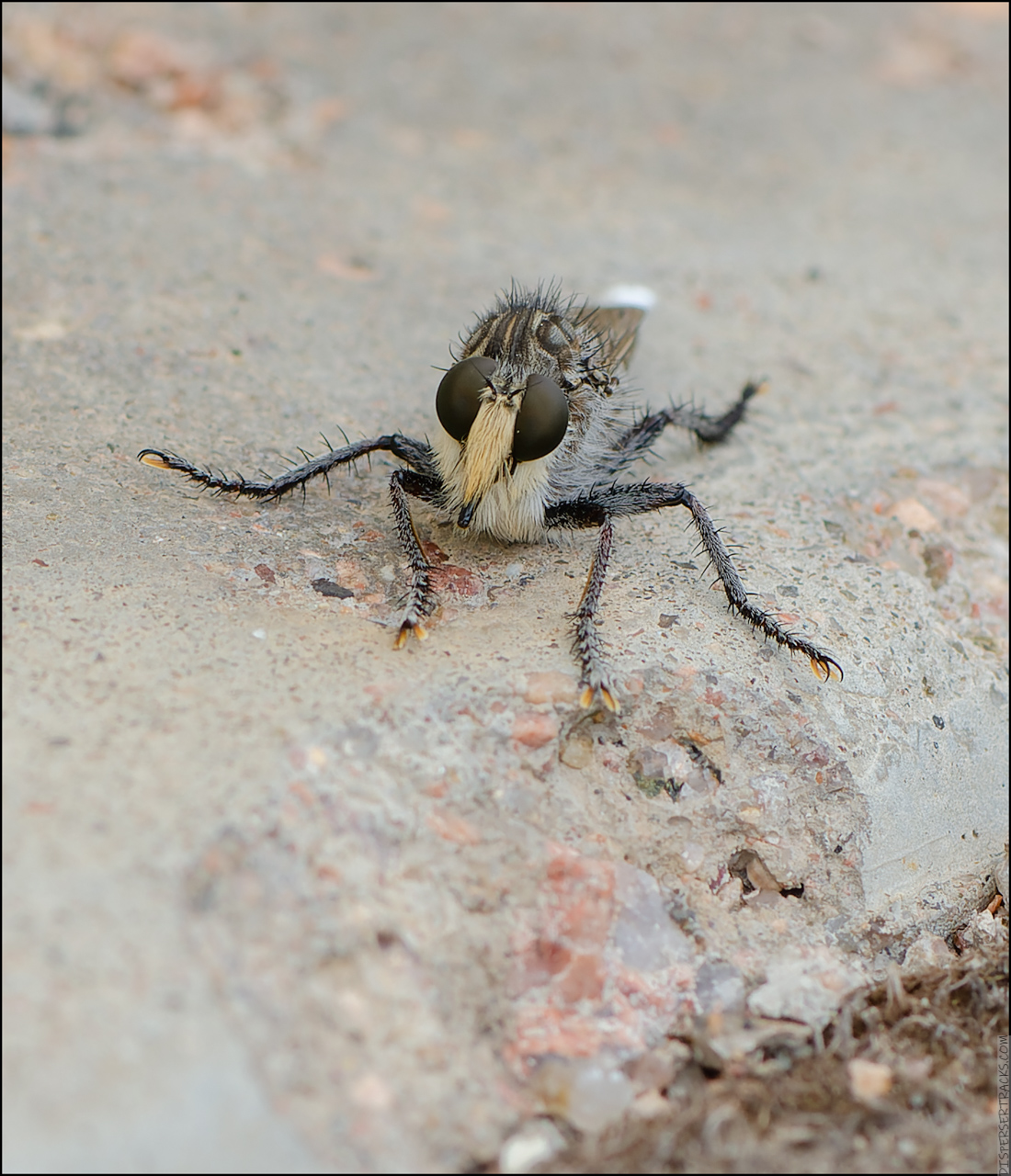 And, guess what? I had missed the fact the female was enjoying a meal . . . 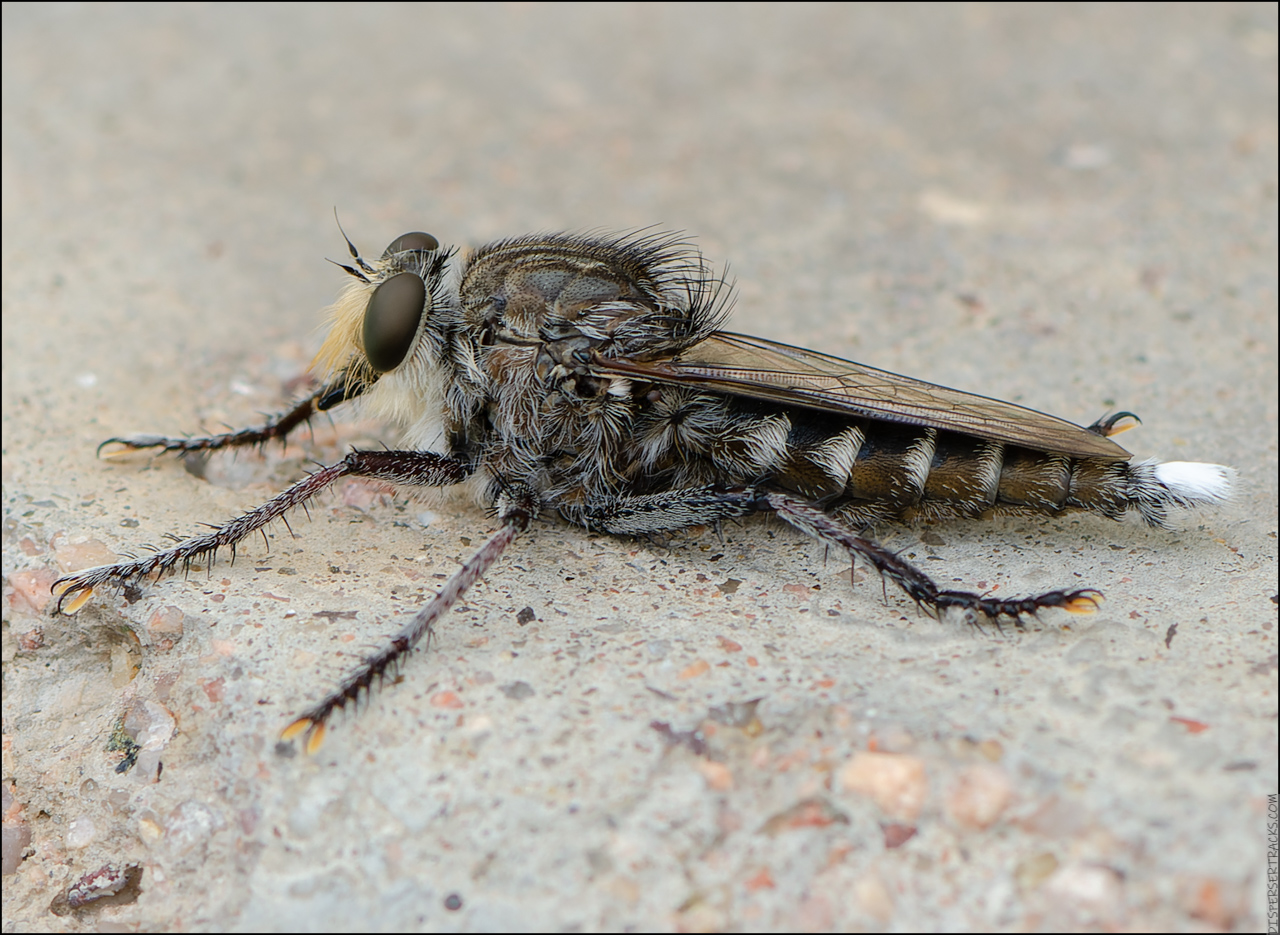 The photos were captured with the Nikon 105mm macro lens, and for these last shots I was on my stomach, on the ground . . . the neighbors probably just shook their heads and went back to tending to their dogs and kids.

These Assassins didn’t seem perturbed by me moving on the ground around them, and they were still there when I tired of taking photos and headed back in.

I’ve seen (and heard) Robber Flies since, but I’ve yet to have another chance to snap more photos.” 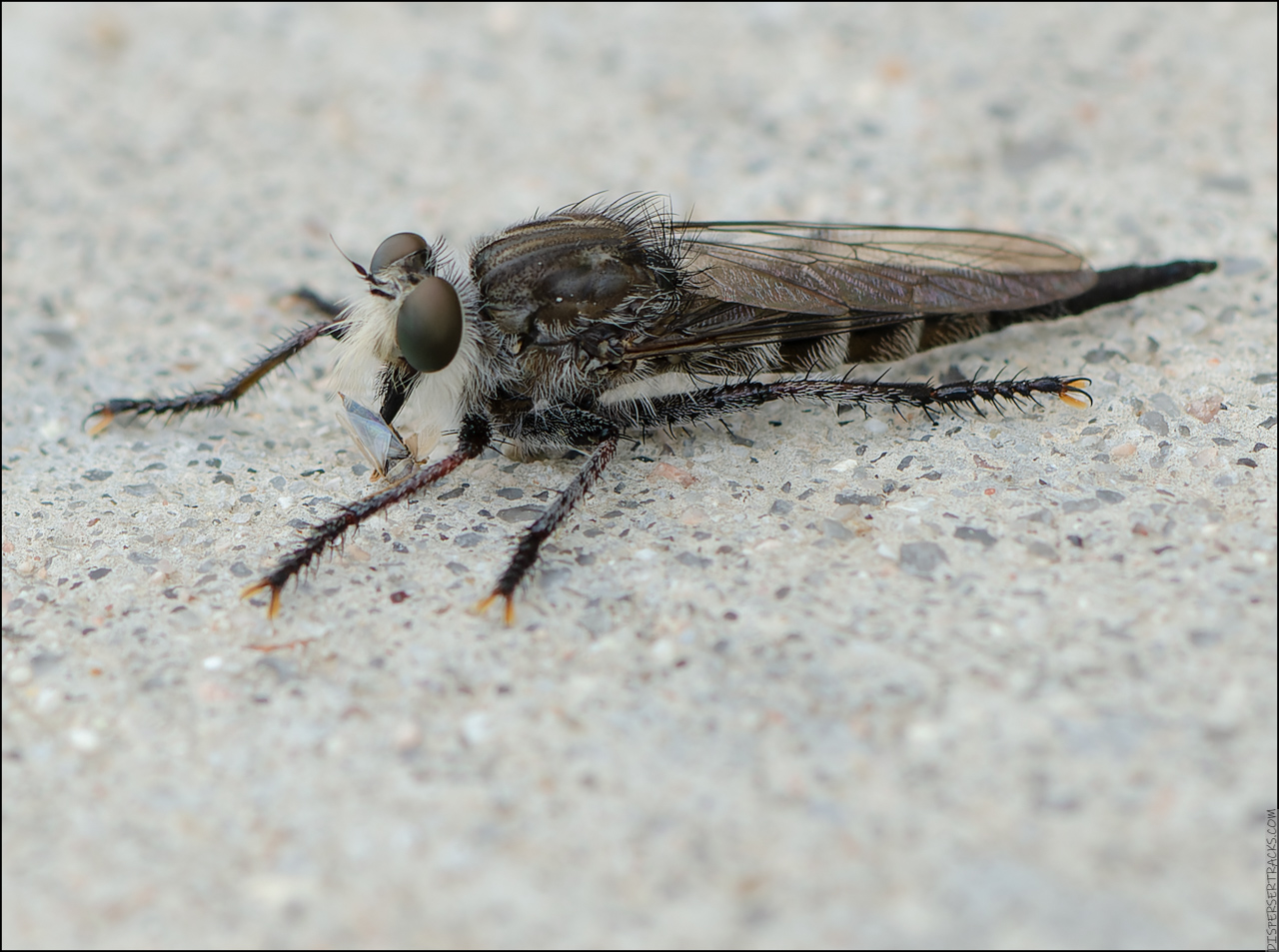