Send in your photos, please! Today’s batch comes from Rik Gern. His captions are indented, and you can enlarge the photos by clicking on them.

The last pictures I submitted for your Reader’s Wildlife Photos feature pretty much drained my tank of prepared photographs,  so I’ve gone thru the files to find some pictures that might be worth processing and sending your way.

These pictures revisit a Spineless Prickly Pear Cactus (Opuntia ellisiana), pictures of which I sent you about this time last year. Same plant, new pictures.

In the springtime it’s always the yellow flower that catches the eye, so we start with an overhead view of a fresh flower, pollen intact and unmolested by bees or wind. Going in close and then pulling back we focus first on the female part of the flower, the stigma, at the tip of the pistil. Taking a wider view we can see the anther and filament of the stamen, or male part. Surrounding all that are the petals, one of which has a little pointy spike. 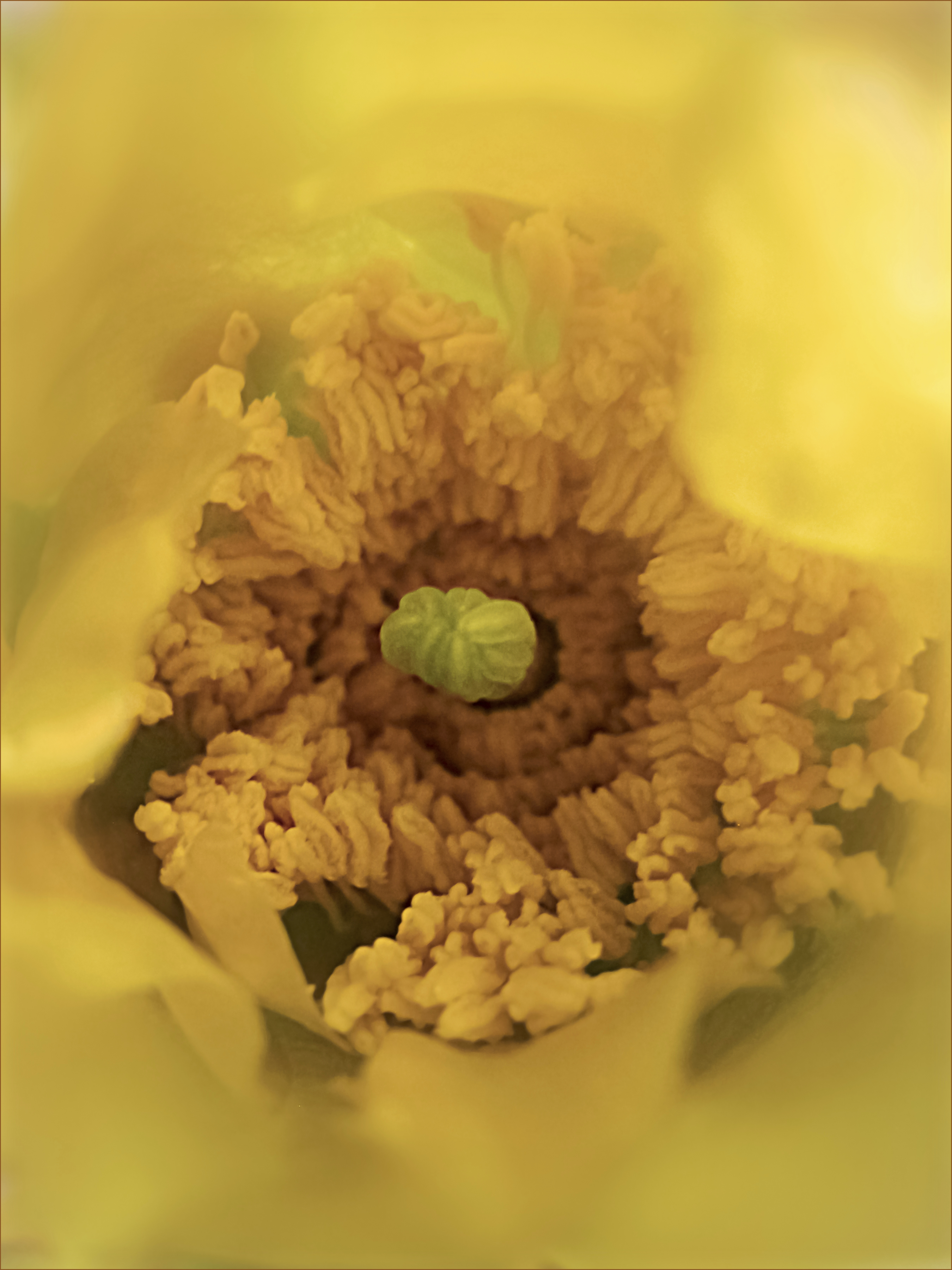 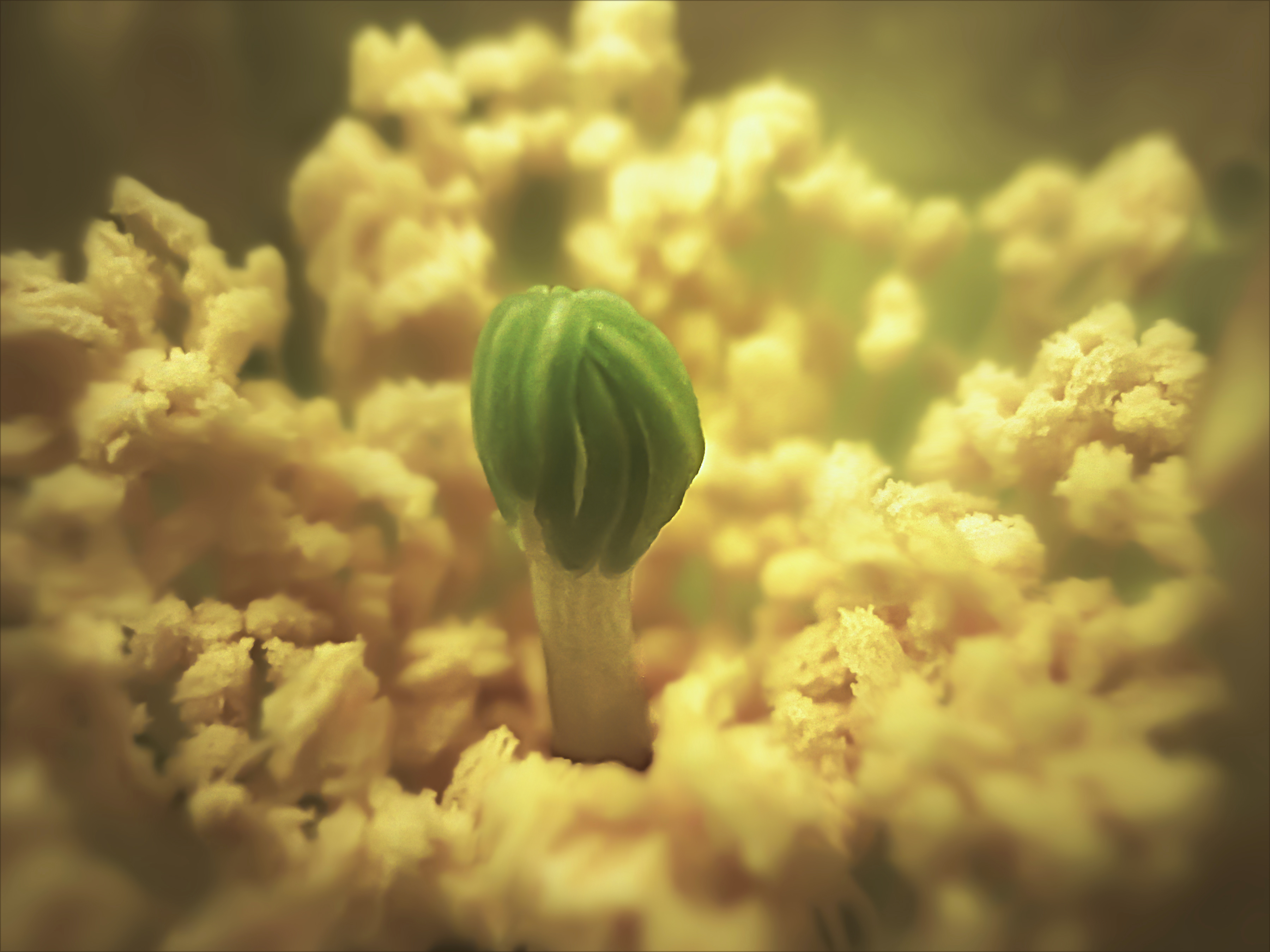 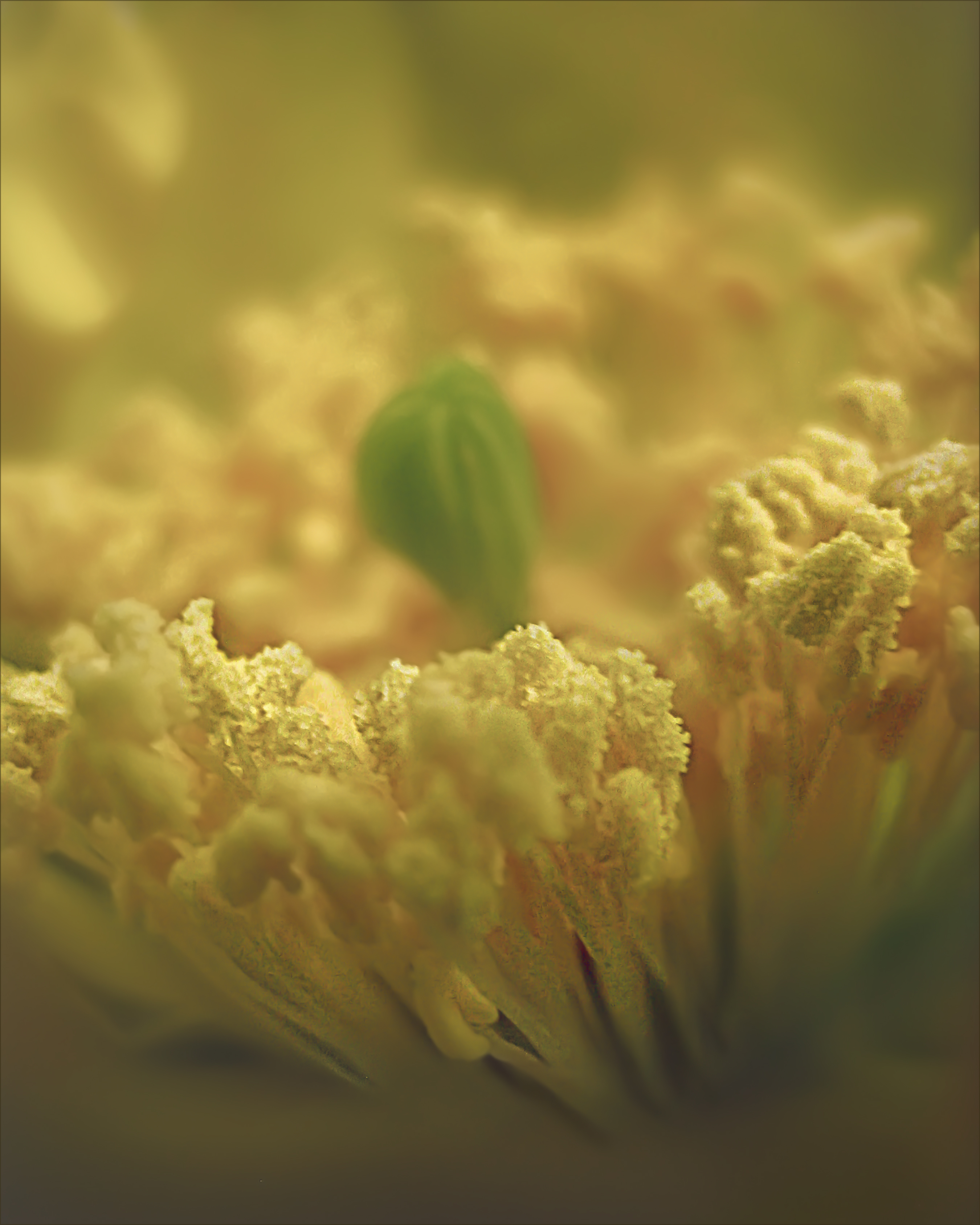 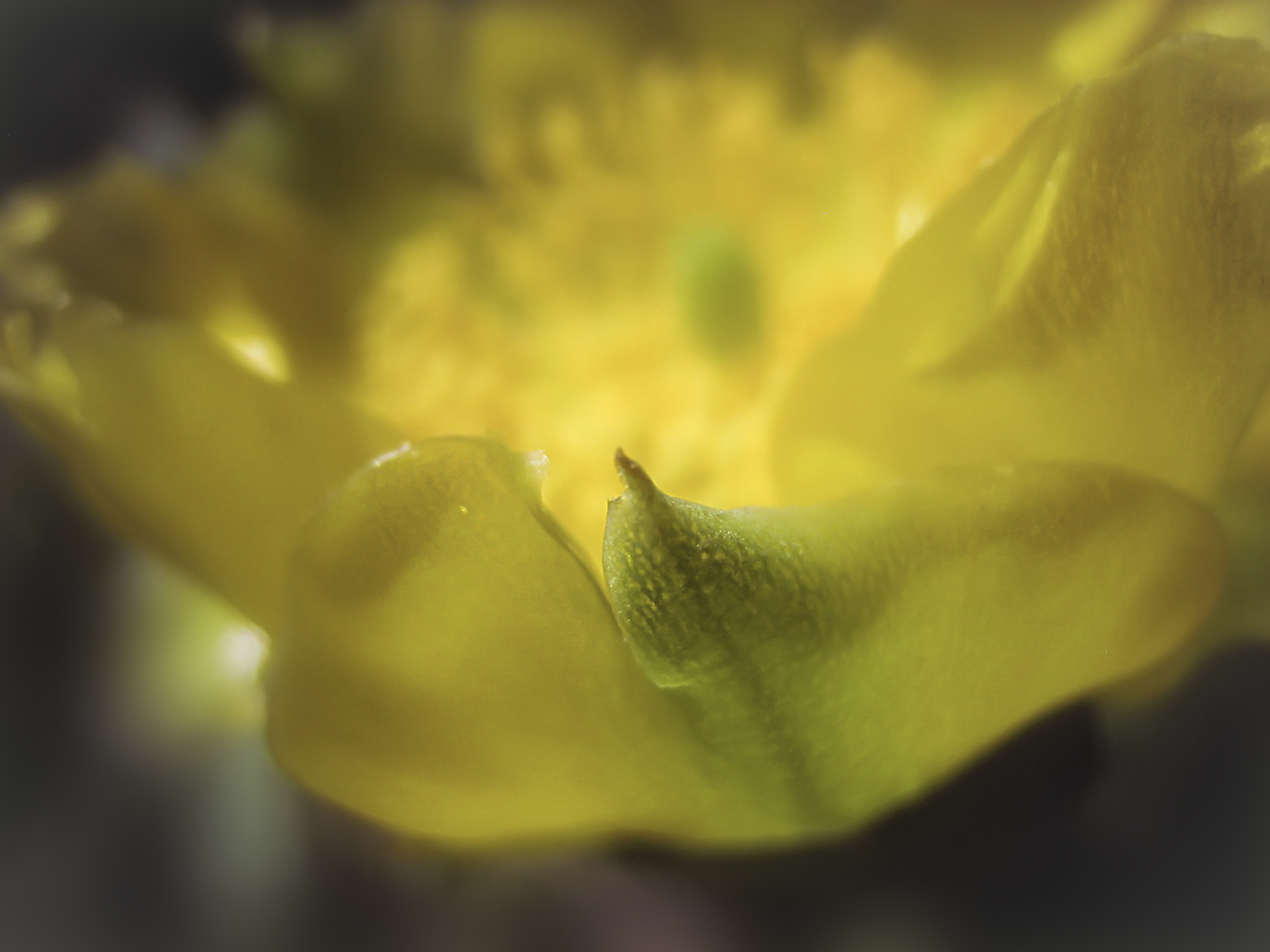 The cactus also sprouts fresh pads in the spring, and they’re briefly covered with funky little vestigial leaves that eventually fall off and leave glochids–clusters of prickly little pins.  This particular pad is growing on the underside of the cactus, from the stump of a pad that was lopped off to make room for pedestrian traffic on the sidewalk. Just below the base of the fresh pad you can see a small snail on the underside of the cactus plant. 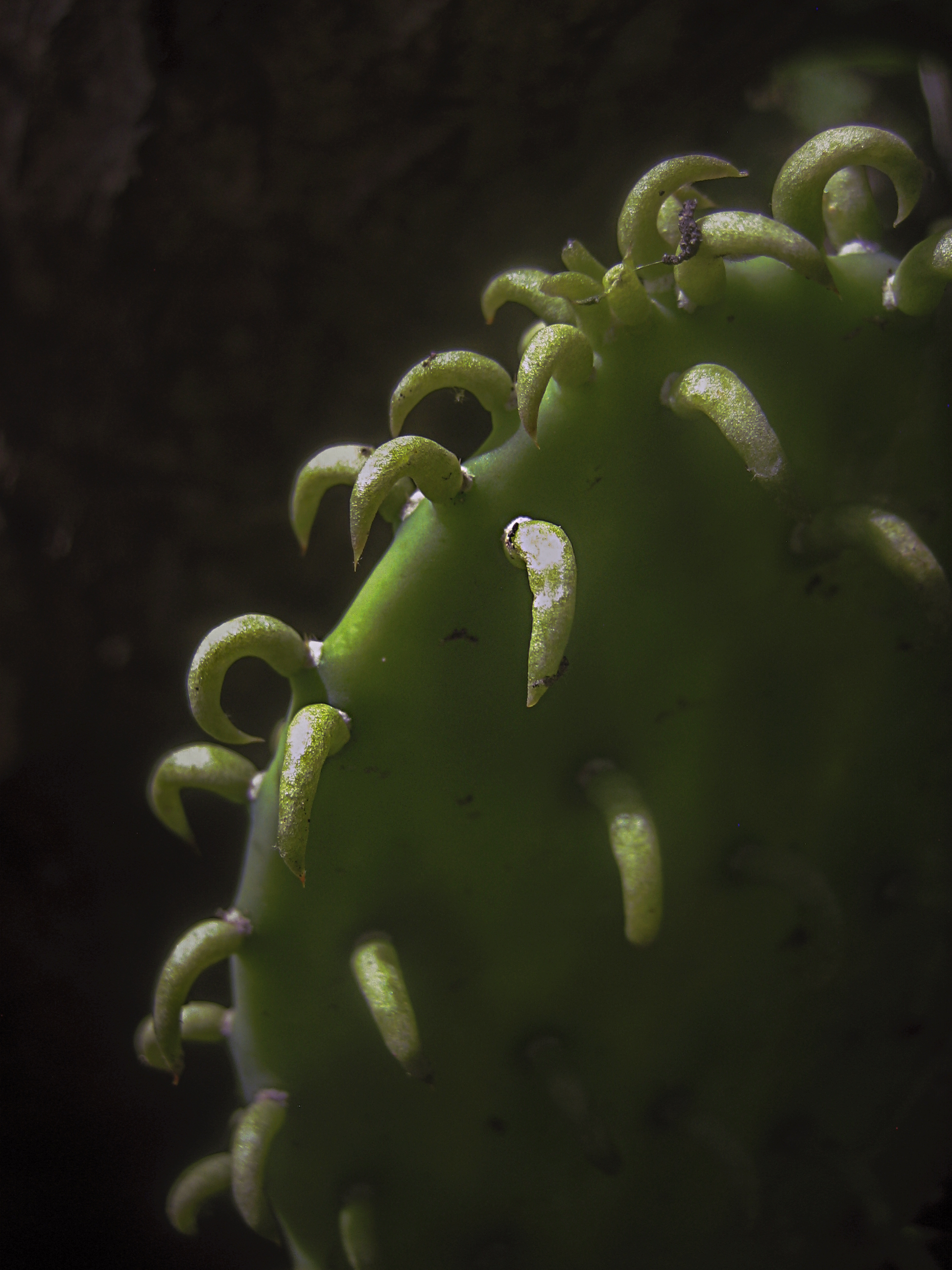 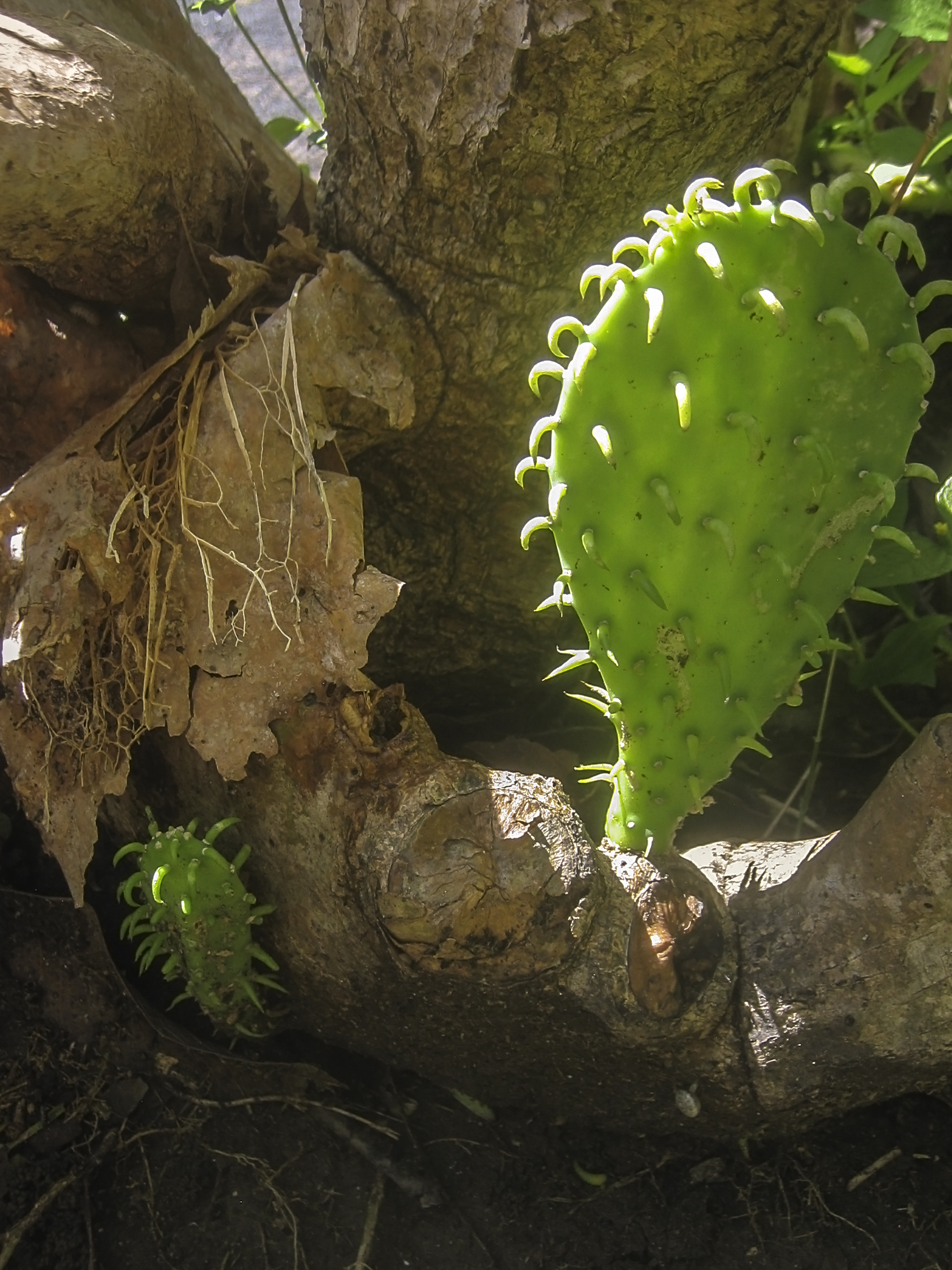 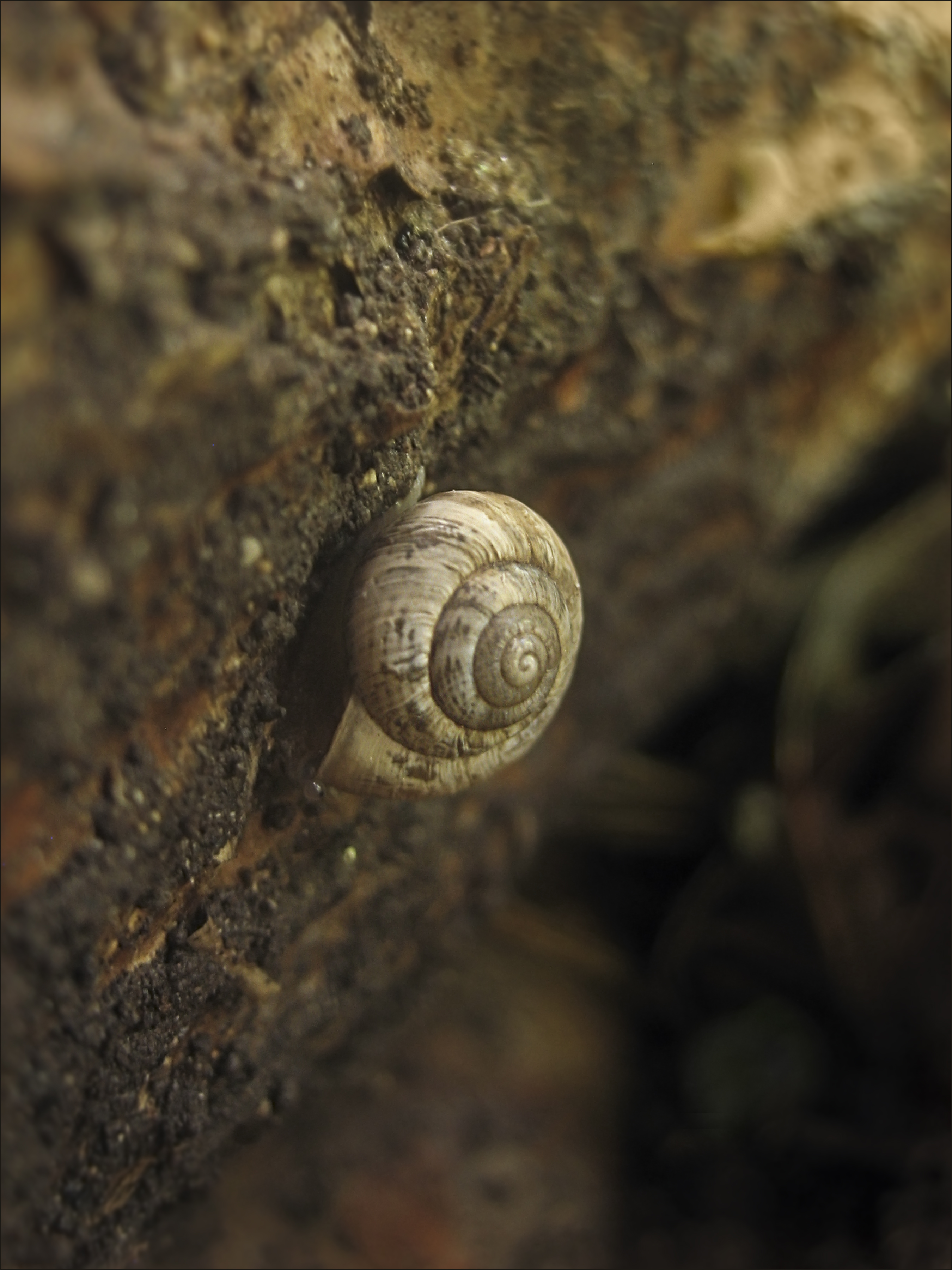 There were a number of them residing on this cactus; here’s another that was cruisin’ along the edge of a pad in the early sunlight. 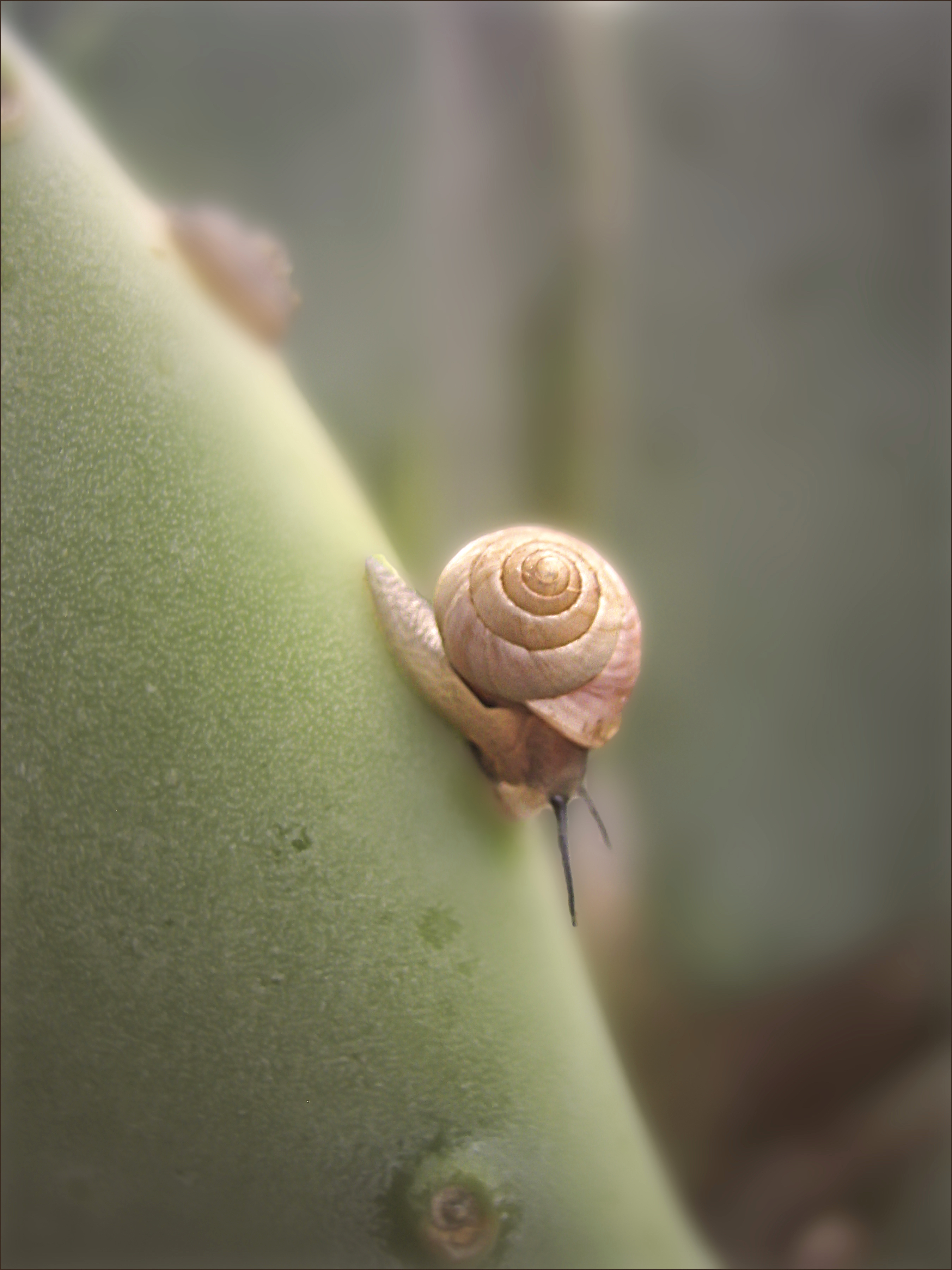 Besides picturesque snails and bees, the Spineless Prickly Pear is also home to the very buggy looking bug, Cactus Coreid (Chelinidea vittiger). They give me the willies when I see bunches of them on the sides of the pads, but viewed individually they’re very interesting. Here is one reaching the top of the cactus and finding a crater where the flower used to be. 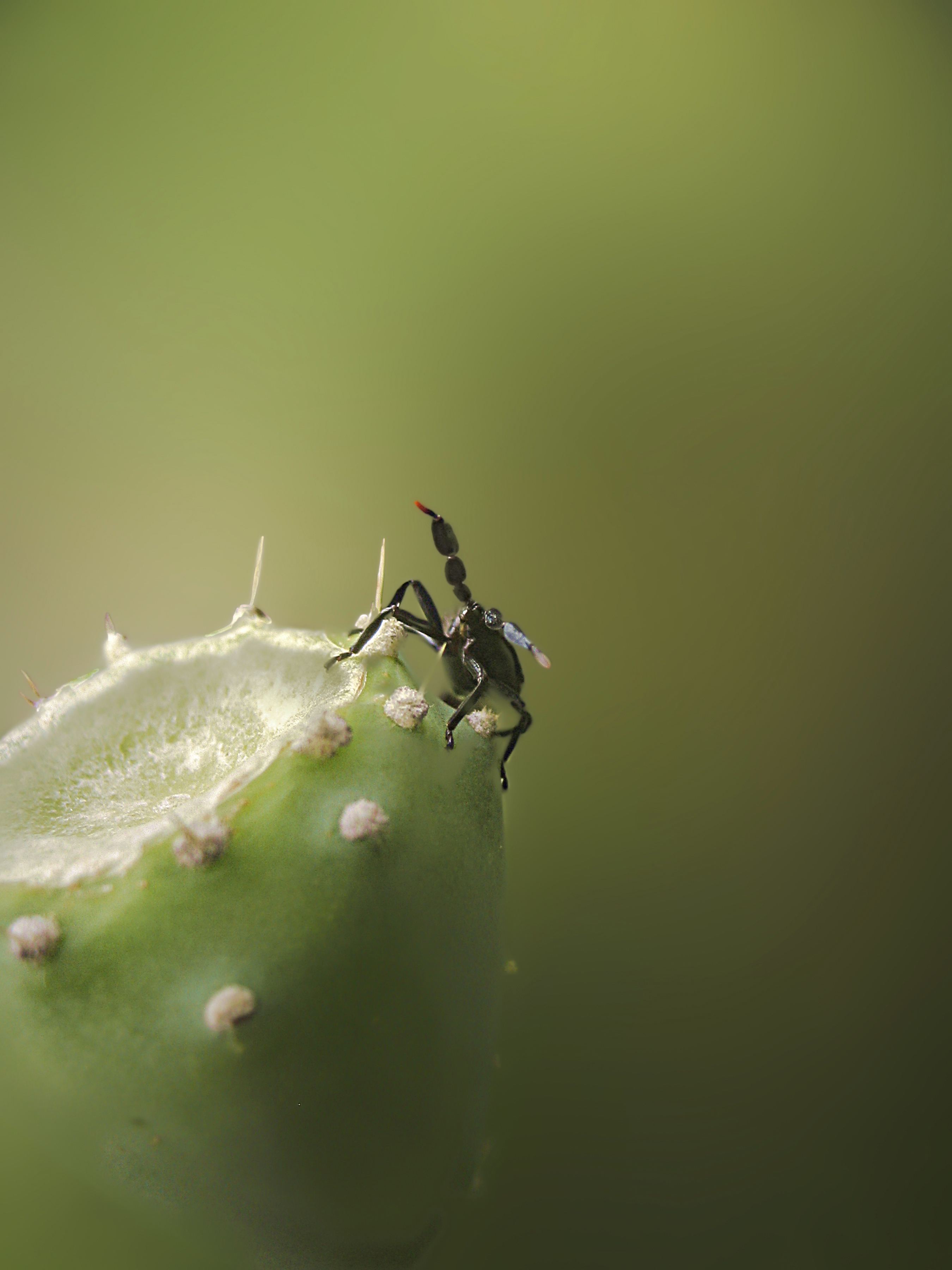 Where is the flower? I don’t know if it’s the same one, but here is a flower fallen from it’s perch and lying among the undergrowth, dethroned but still radiant. 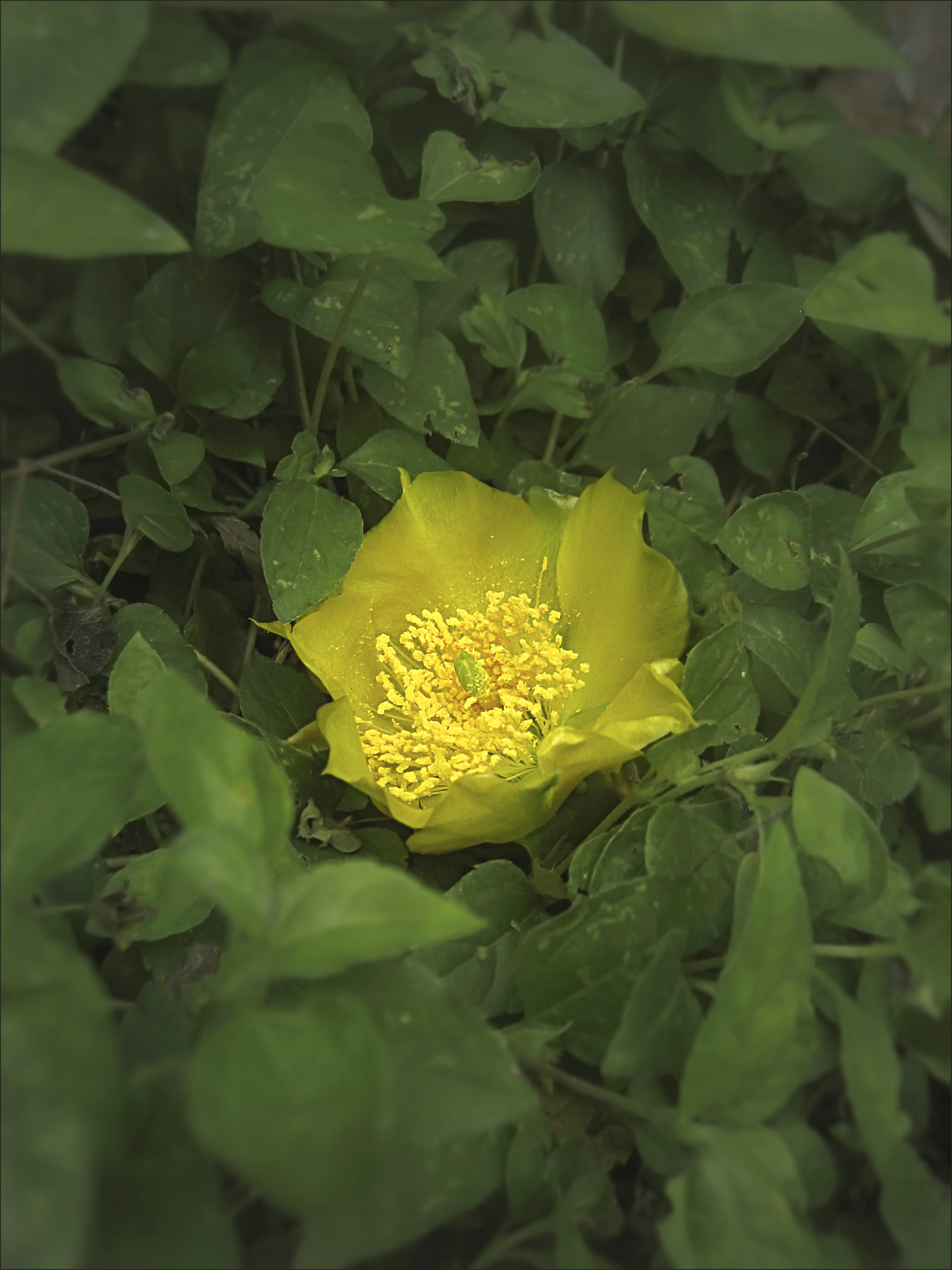 For those who might be interested, the pictures were taken with a Canon PowerShot SD400 and processed with Photoshop CS6.