I’m not sure what language to use in the title. I know that “slave” is now replaced by “enslaved person”, so I suppose I should have called Jefferson an “enslaver”. I’ll take my chances.  At any rate, Smithsonian Magazine has a long article on this issue from 2012 (11 pages printed out single spaced in 9-point type) on how Jefferson ran Monticello with a group of enslaved people (this is awkward to write; the article itself was written before “slave” went out of fashion).  Those held captive numbered around 100 and went as high as 140. Jefferson owned more than 600 slaves during his life.

Although the article is nine years old, it’s still worth reading, though it ignores the issue of Sally Hemings, one of the enslaved people who in fact produced children by Jefferson. The Monticello site takes up that issue quite frankly, and you can also read Jon Meacham’s highly praised 2012 biography of the man, Thomas Jefferson, The Art of Power. I read it about six years ago, and have little recollection of how it treated Jefferson as a slaveholder.

Click on the screenshot to read. And remember, this article was written well before Wokeness shrouded the land. 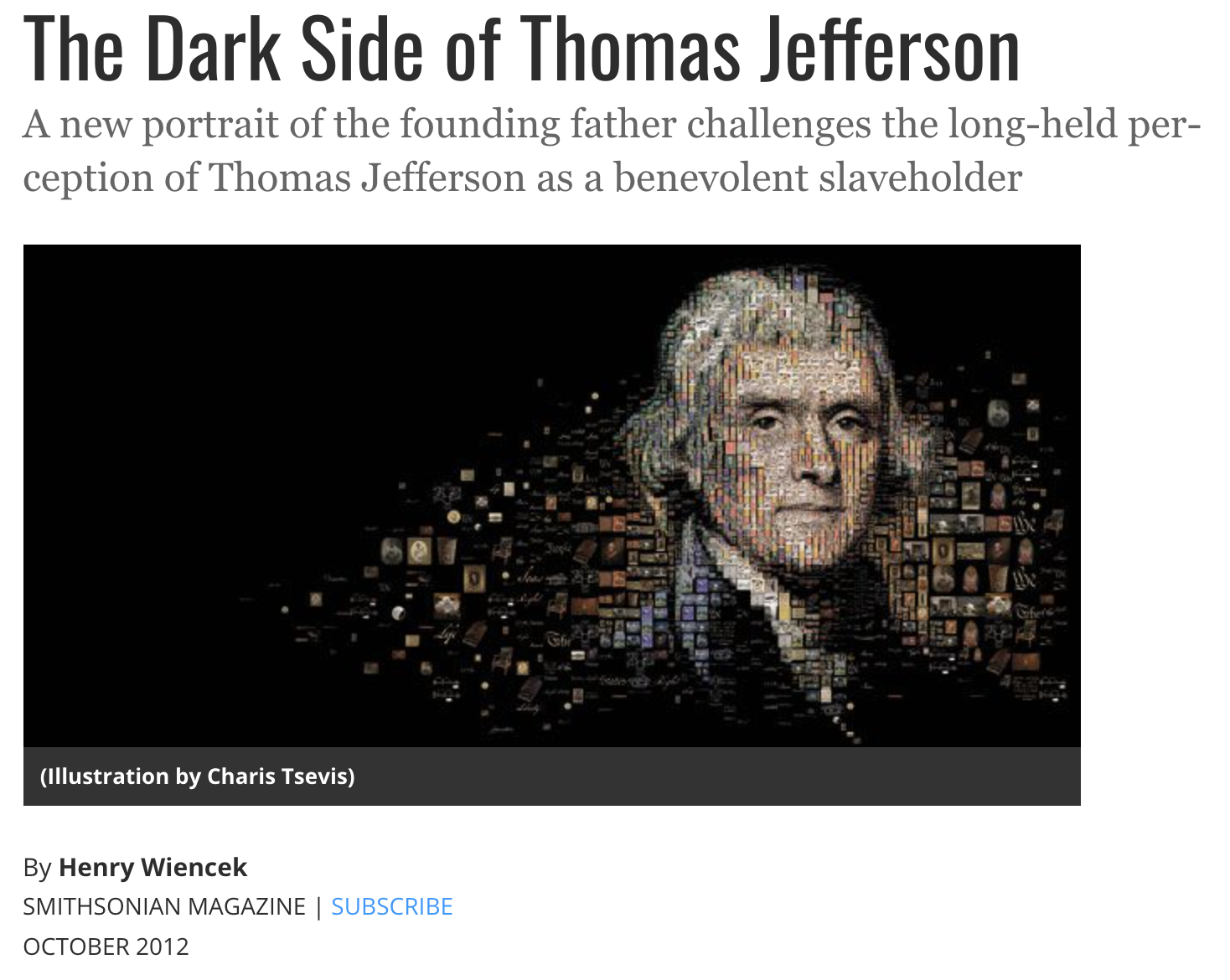 I won’t summarize such a long article, and the data may have been updated, but here are a few facts:

Most important, Jefferson lived in an era when it was NOT the Zeitgeist for everyone to think that slavery was okay. It was normal in Virginia, but remember that Jefferson wrote, in the first draft of the Declaration of Independence, a denunciaton of slavery, at least according to Wiencek:

In his original draft of the Declaration, in soaring, damning, fiery prose, Jefferson denounced the slave trade as an “execrable commerce …this assemblage of horrors,” a “cruel war against human nature itself, violating its most sacred rights of life & liberties.” As historian John Chester Miller put it, “The inclusion of Jefferson’s strictures on slavery and the slave trade would have committed the United States to the abolition of slavery.”

It is not as if the normal thing to do in America was to accept the existence of slavery.

There were plenty of people in Jefferson’s era, though perhaps not in his Southern environs, who saw slavery as a moral evil. Jefferson did not, though he clearly was conflicted. But in the end, he kept human chattel that he regarded as a bank account that gave interest.

What do we do with such a man? Should we put up statues to him, as they did at my alma mater, The College of William and Mary? (And of course there’s the Jefferson Memorial in Washington, D.C.) After all, the statues are there to honor his positive accomplishments, and one can make a case that Jefferson did more good than bad in his life (these are my criteria for honoring someone). But after reading this piece, and assuming that the facts are reported correctly, I have to think twice.

Please feel free to weigh in below.