For those of you whose photos haven’t yet appeared, do not fret: I do not usually post them in order of receipt, but as the topics strike my fancy. I try to inform every contributor when their photos appear. In the meantime, please keep sending them. I do appreciate the many readers who have kept this feature going for so many years.

Today’s contributor is Mark Sturtevant, who provides his usual lovely pictures of insects.  His captions are indented, and you can enlarge the photos by clicking on them (twice if you want them really big):

Here are more pictures from late last summer. But there are many more to show!

First up is a very handsome Northern paper wasp, Polistes fuscatus, which should be familiar to everyone through the U.S. This species commonly has brown markings, but they are variable and can even be essentially all black. This is a male, identified by the curly antenna. I have a close friend in the hobby who casually handles the males, but I can’t get myself to do it. This species is now less common because of competition from the invasive European paper wasp. 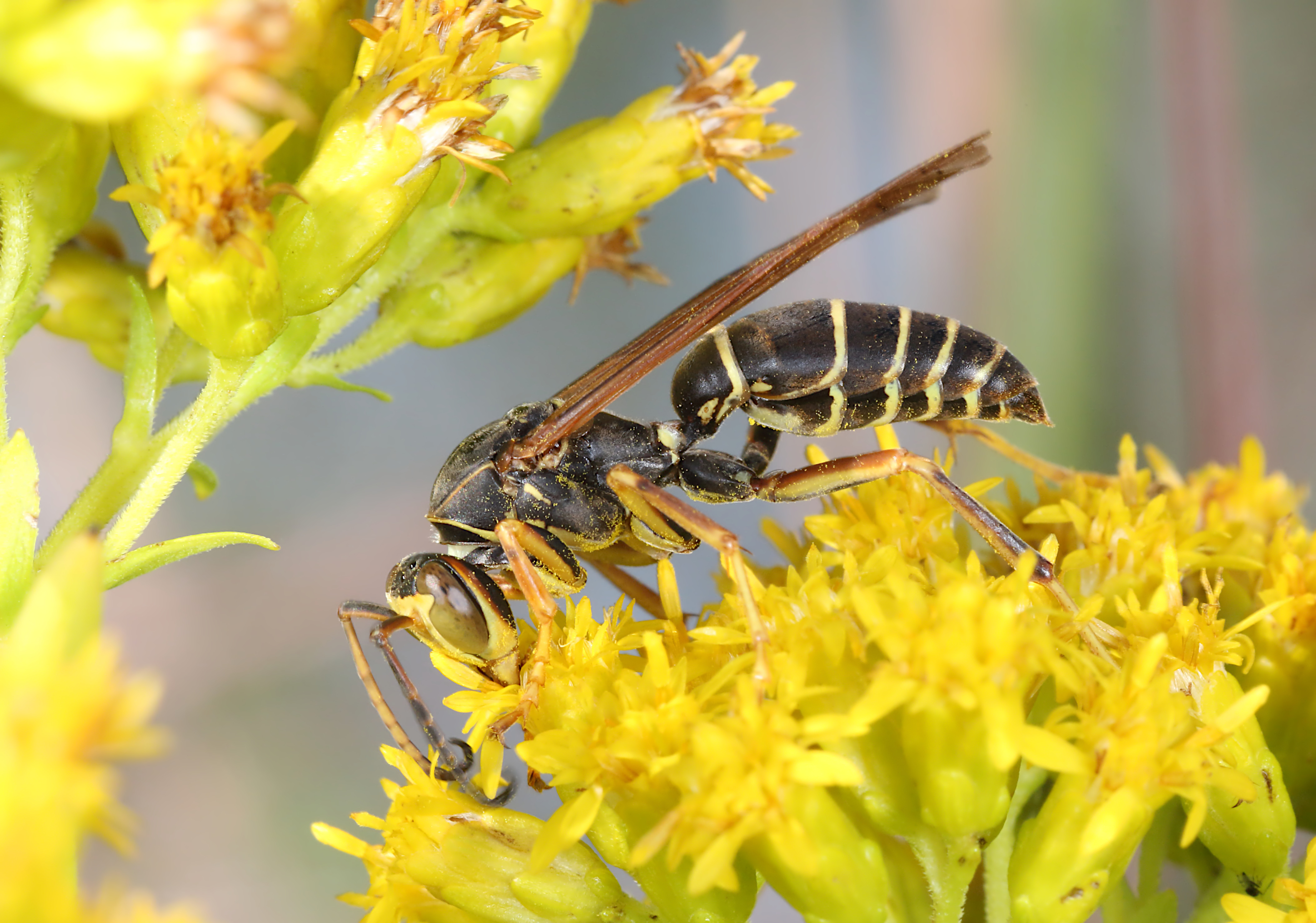 Late in the summer, one can pretty easily spot the beautiful locust borer longhorn beetles (Megacyllene robiniae) on goldenrod, where they usually hang out. Their larvae can damage locust trees, but the adults congregate and feed on yellow and white flowers and they are important pollinators. They are thought to mimic wasps, and one can appreciate that here. ‘ 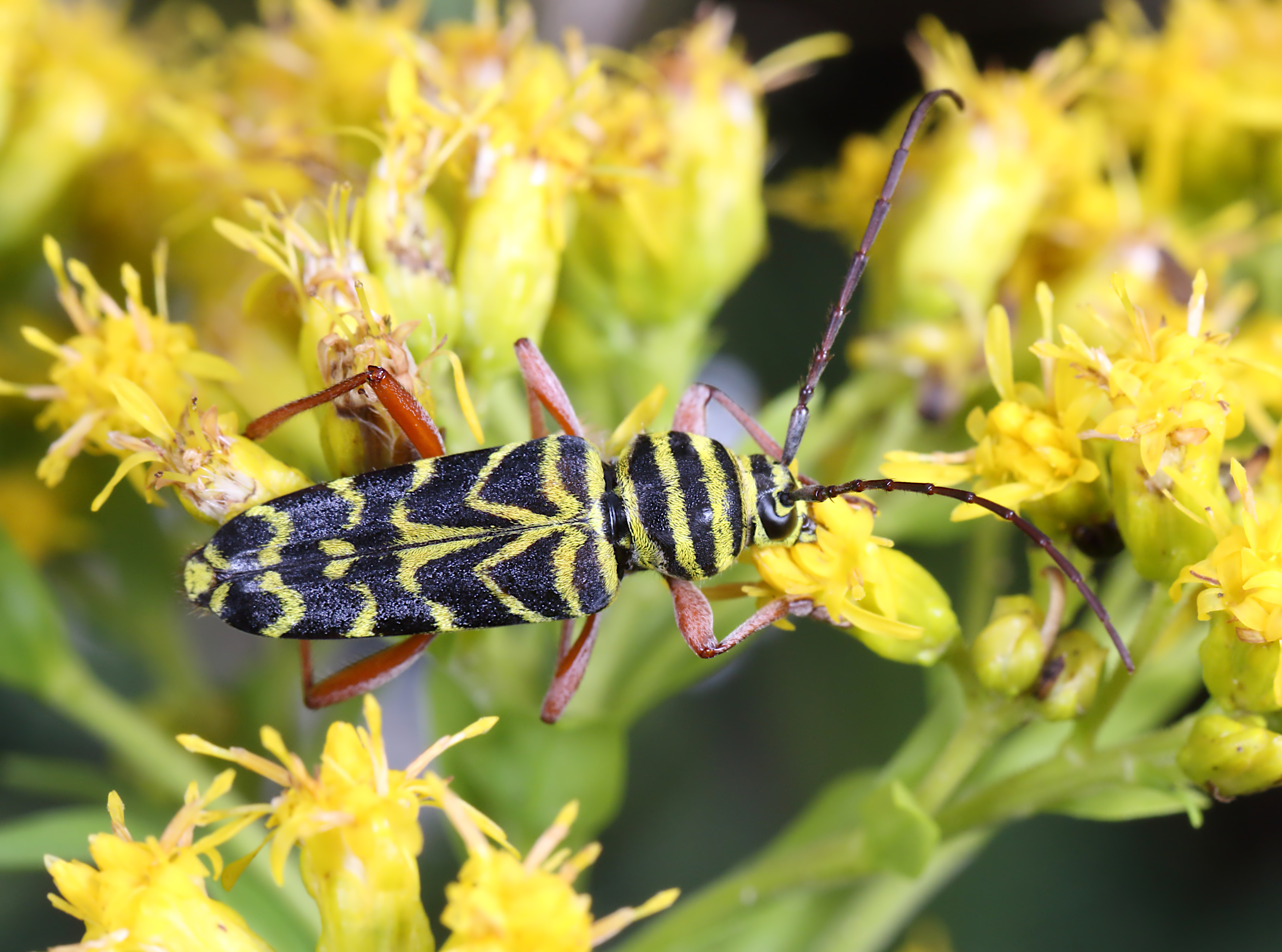 It’s caterpillar time. Here is a chonky caterpillar that I found on a tulip tree. This is the larva of the white-dotted prominent (Nadata gibbosa). 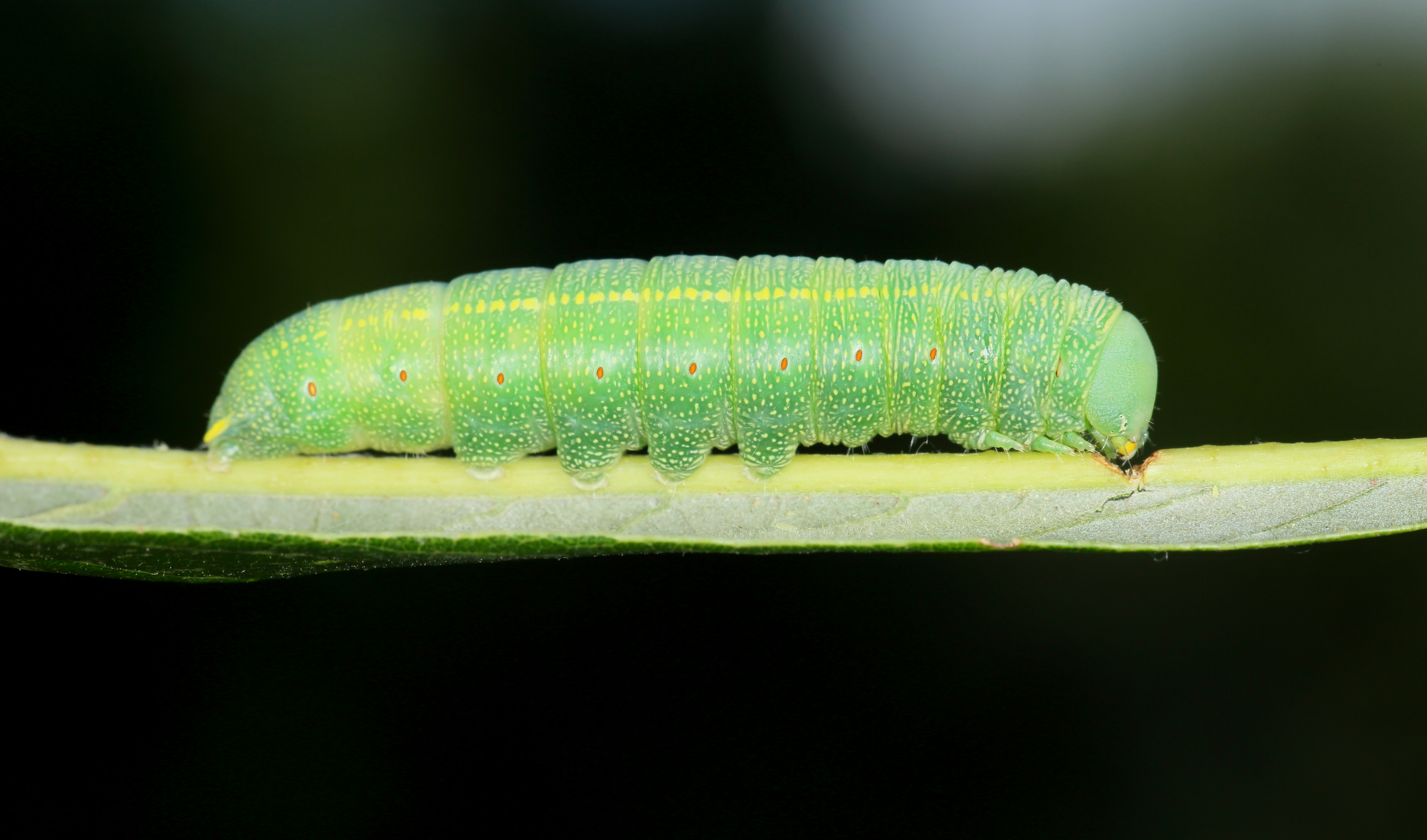 At one of my favored parks I came across a number of these crazy-looking cats on a redbud tree. This is the aptly named red-humped caterpillar, Schizura concinna. It too is a member of the Prominent moth family, which can be generally identified by the extended rear pro-legs. 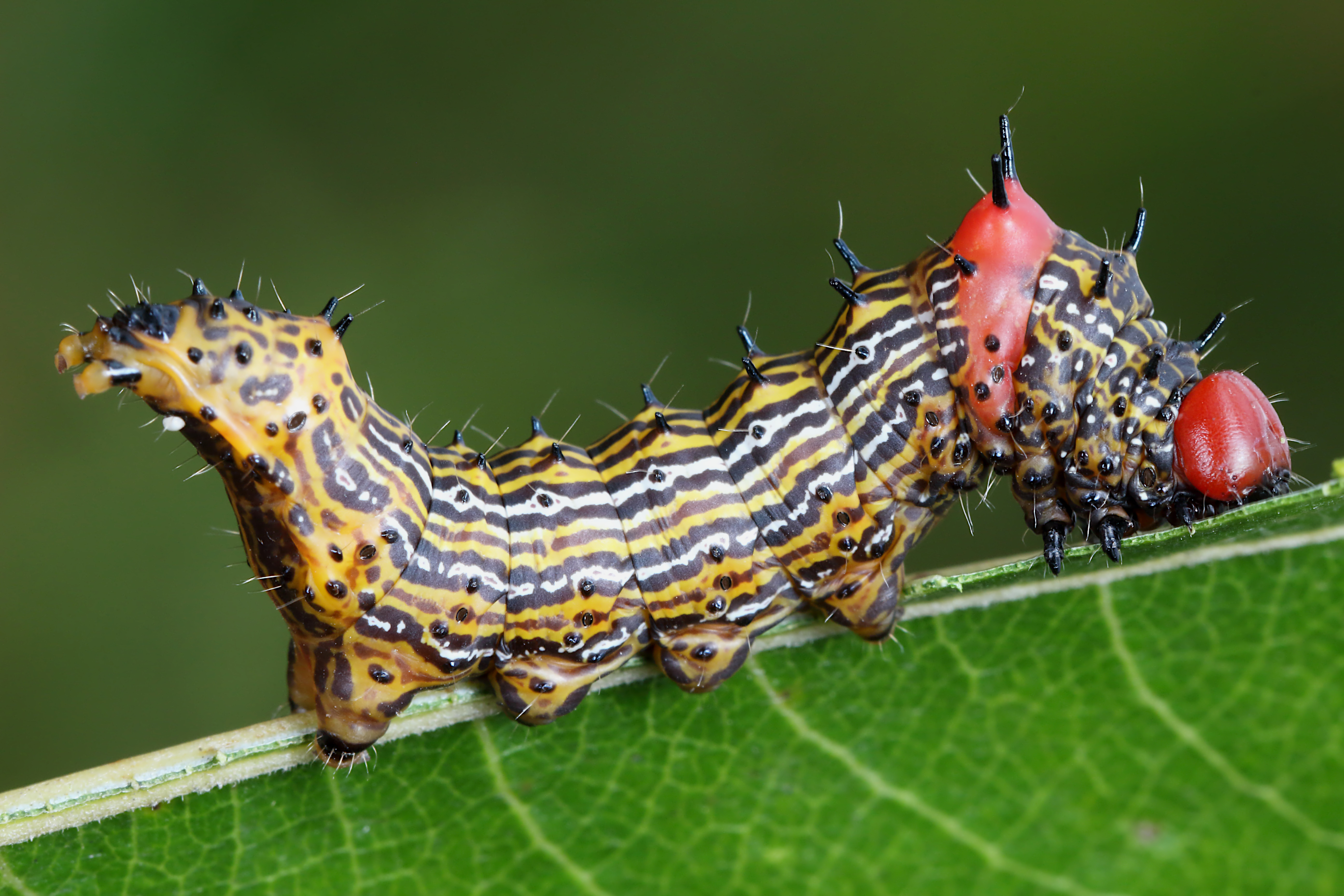 Next is the gaudily colorful hooded owlet caterpillar Cucullia convexipennis. I see quite a few of these late in the summer on the goldenrods Very easy to spot—for obvious reasons! 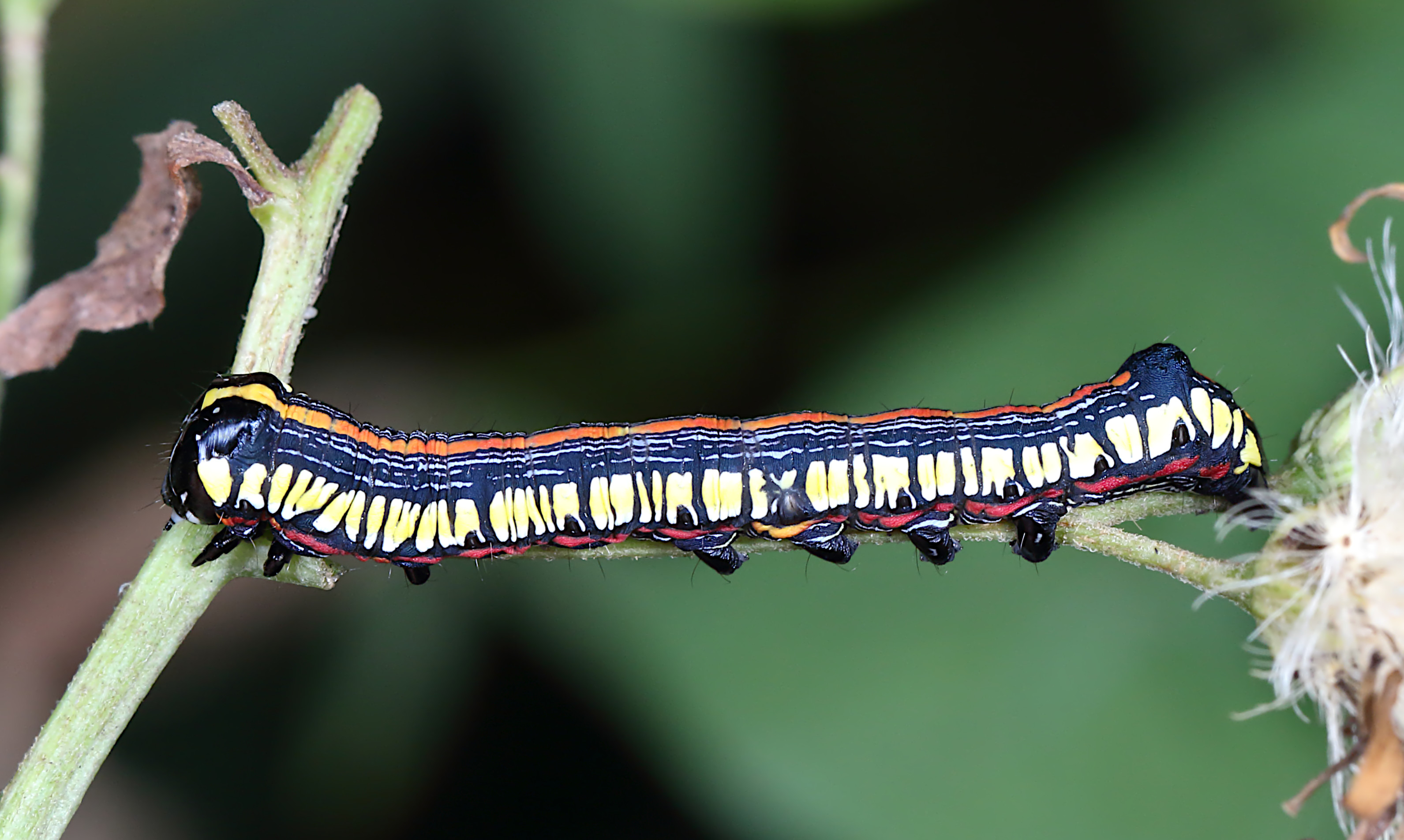 Hickory tussock caterpillars (Lophocampa caryae) feed on a variety of plants, and I don’t remember how I found this one. They are so common that I generally don’t bother. But they are variable in their hairiness and black / white patterning, and this one looked so classy that I could not resist. Common, but I have yet to see an adult moth even though they too are lovely as shown in the link. 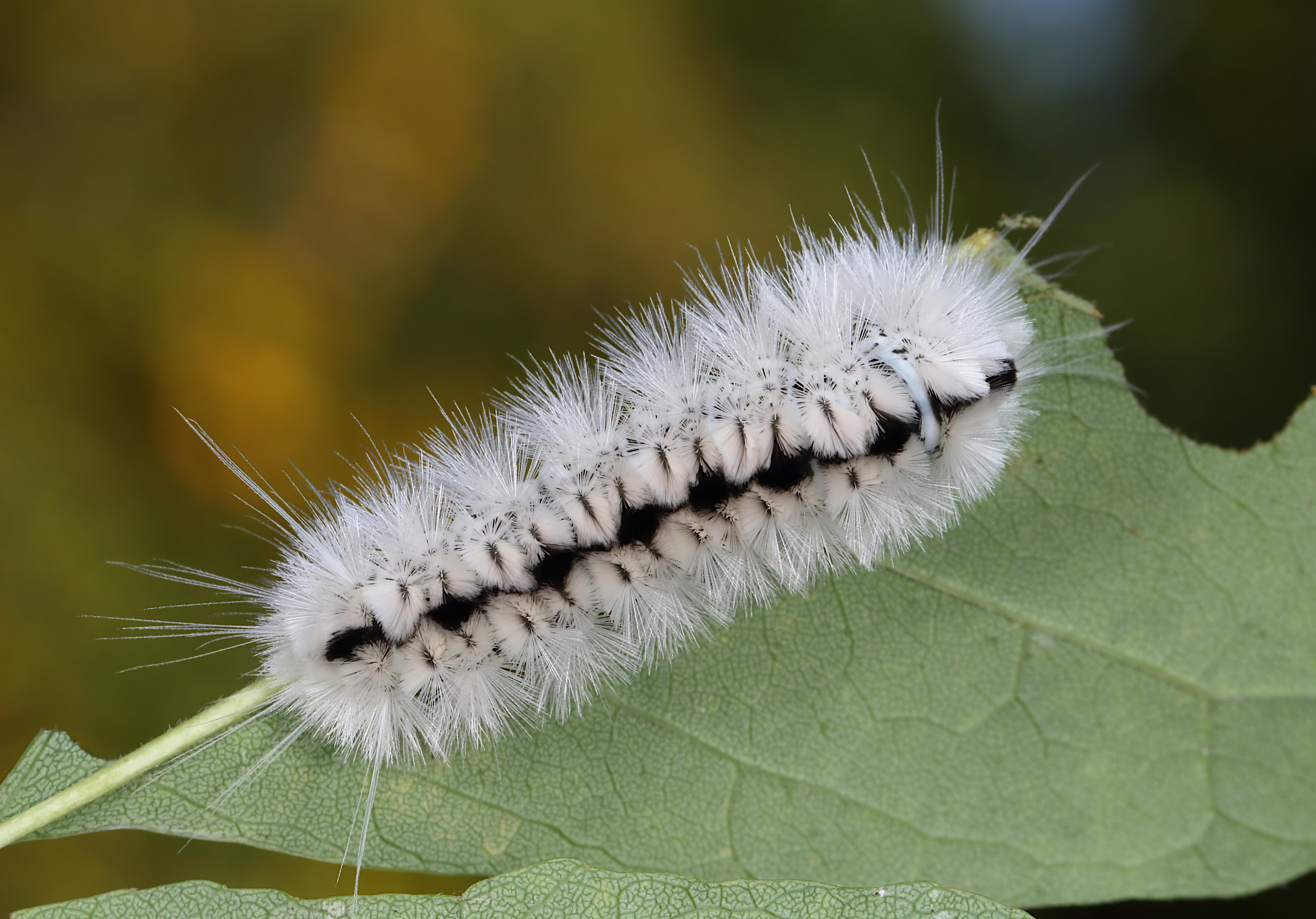 Late summer is mantis season. First up is a very gravid female European mantis, Mantis religiosa. She should be more careful! 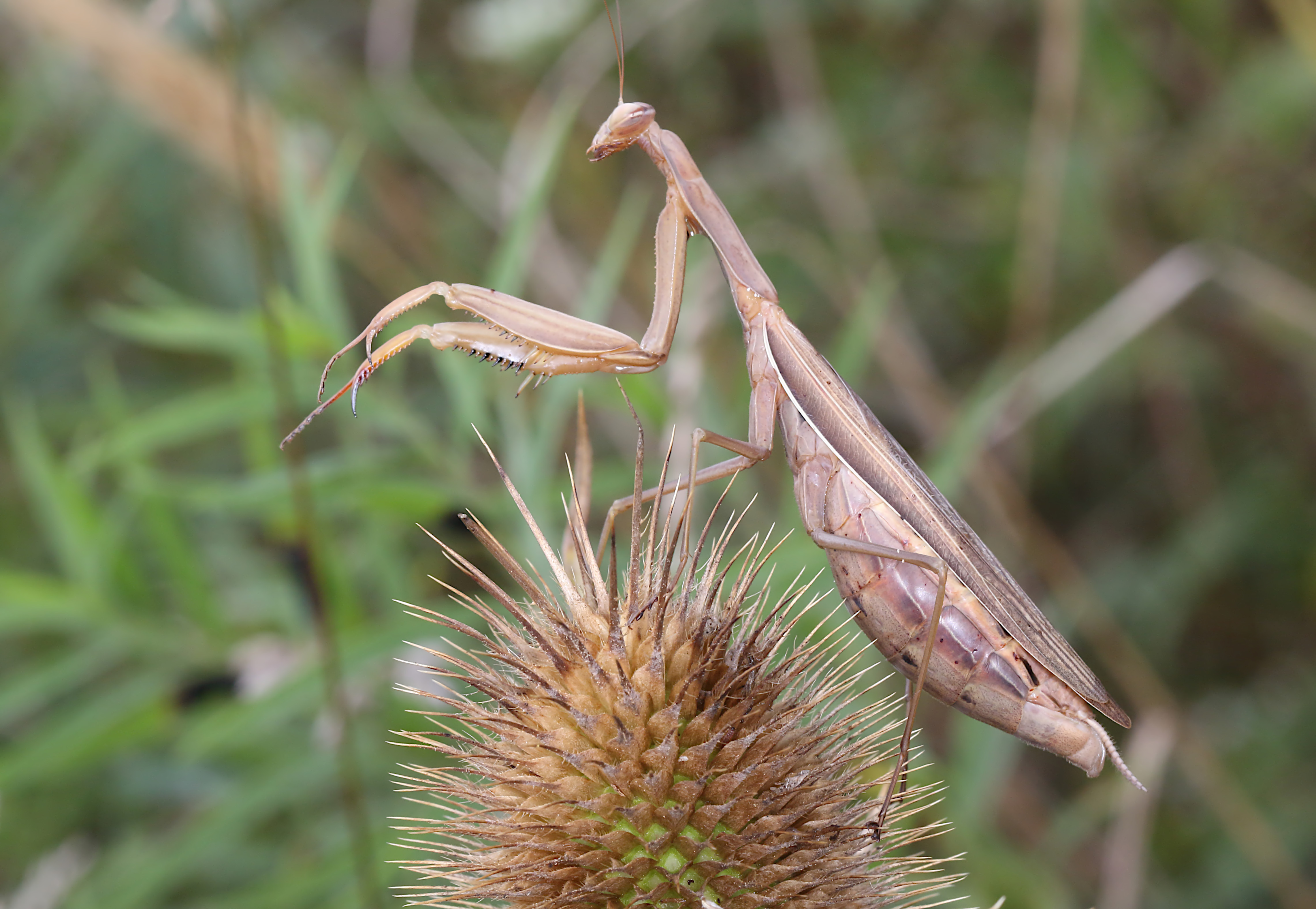 Next are Chinese mantids (Tenodera sinensis). The first is a male who was missing part of an arm. 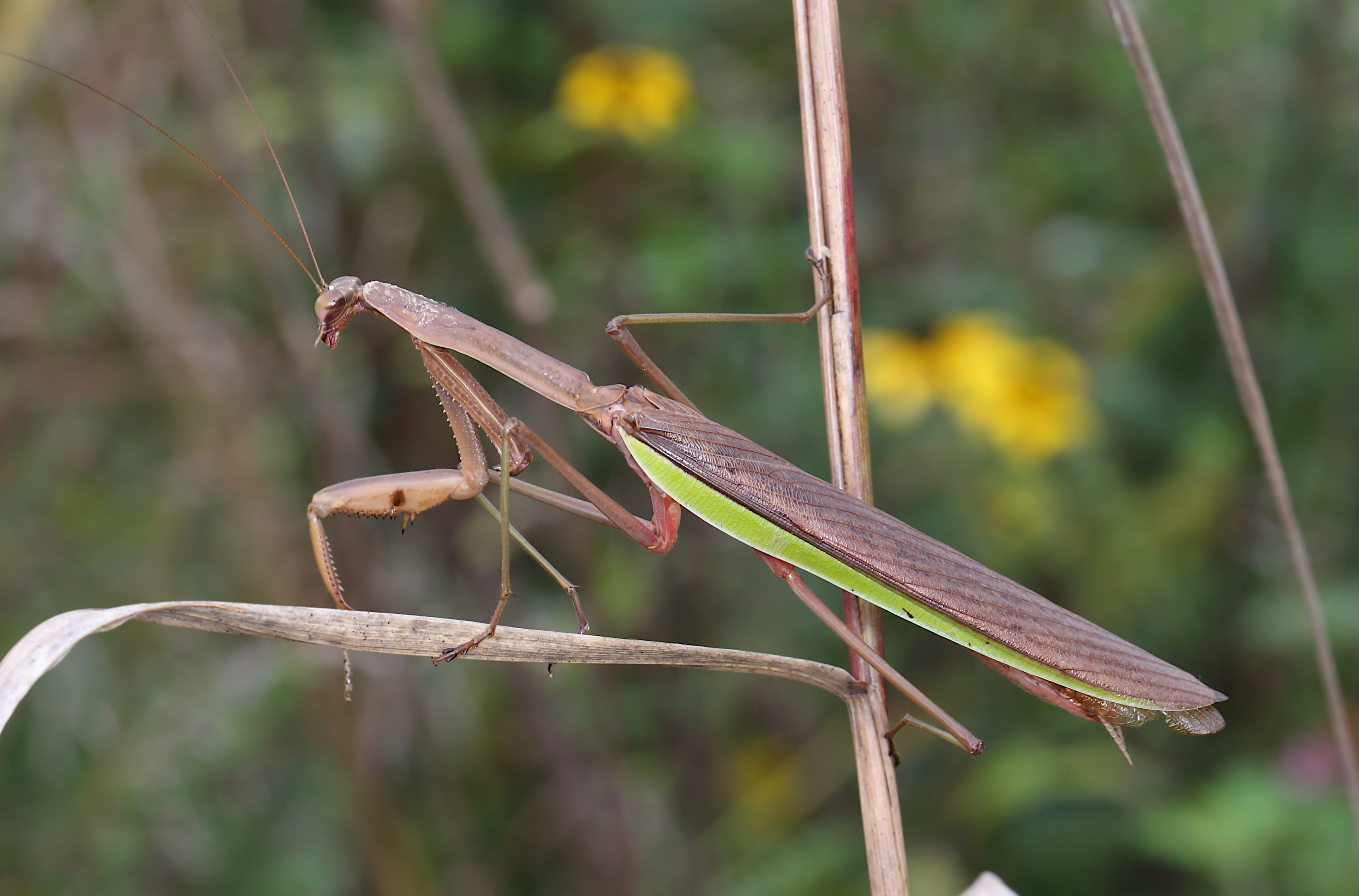 And finally, I spotted this big female Chinese mantis from quite a distance. 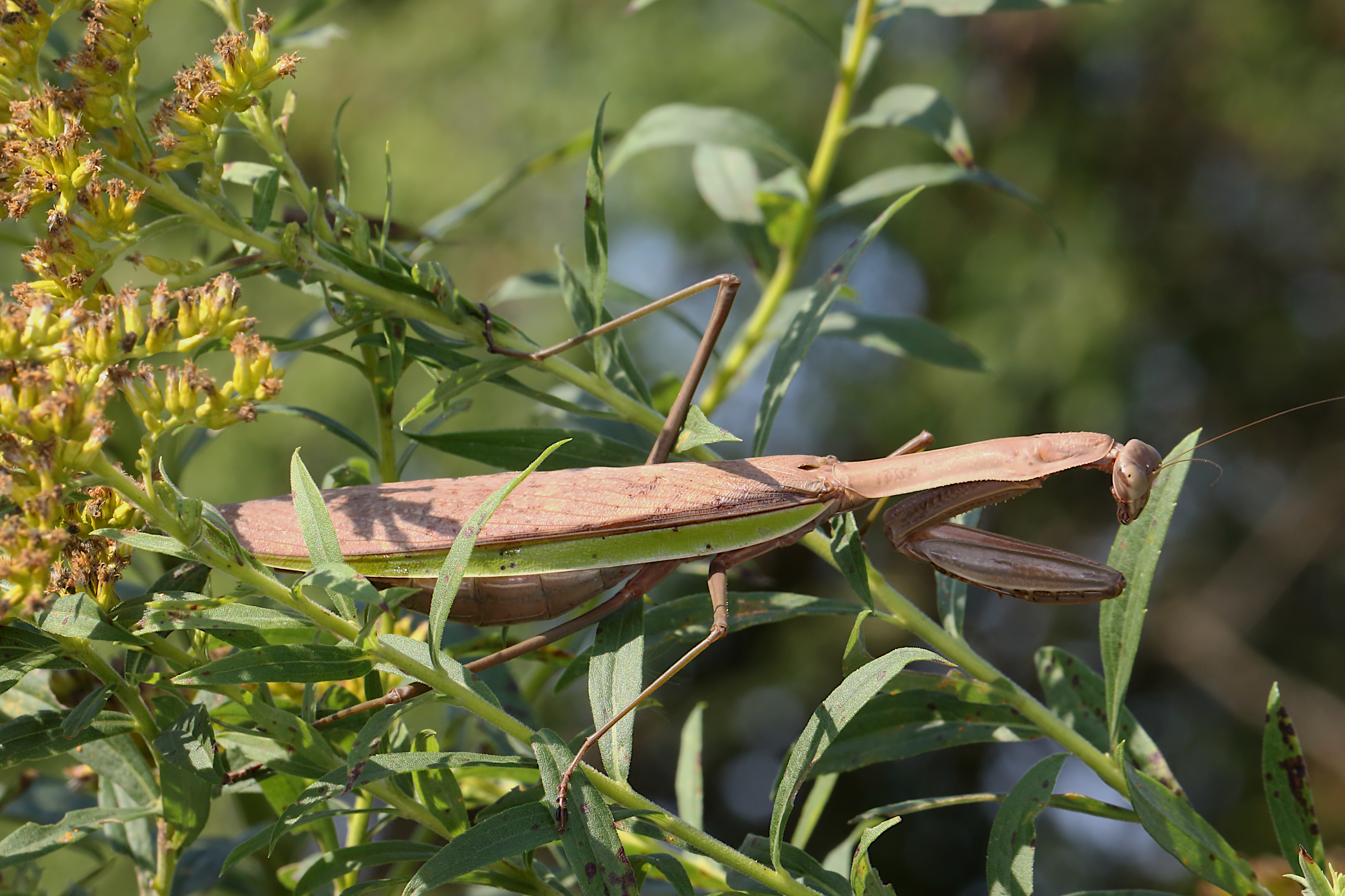 She came home for many more pictures, and I am looking forward to sharing those here in a later post. 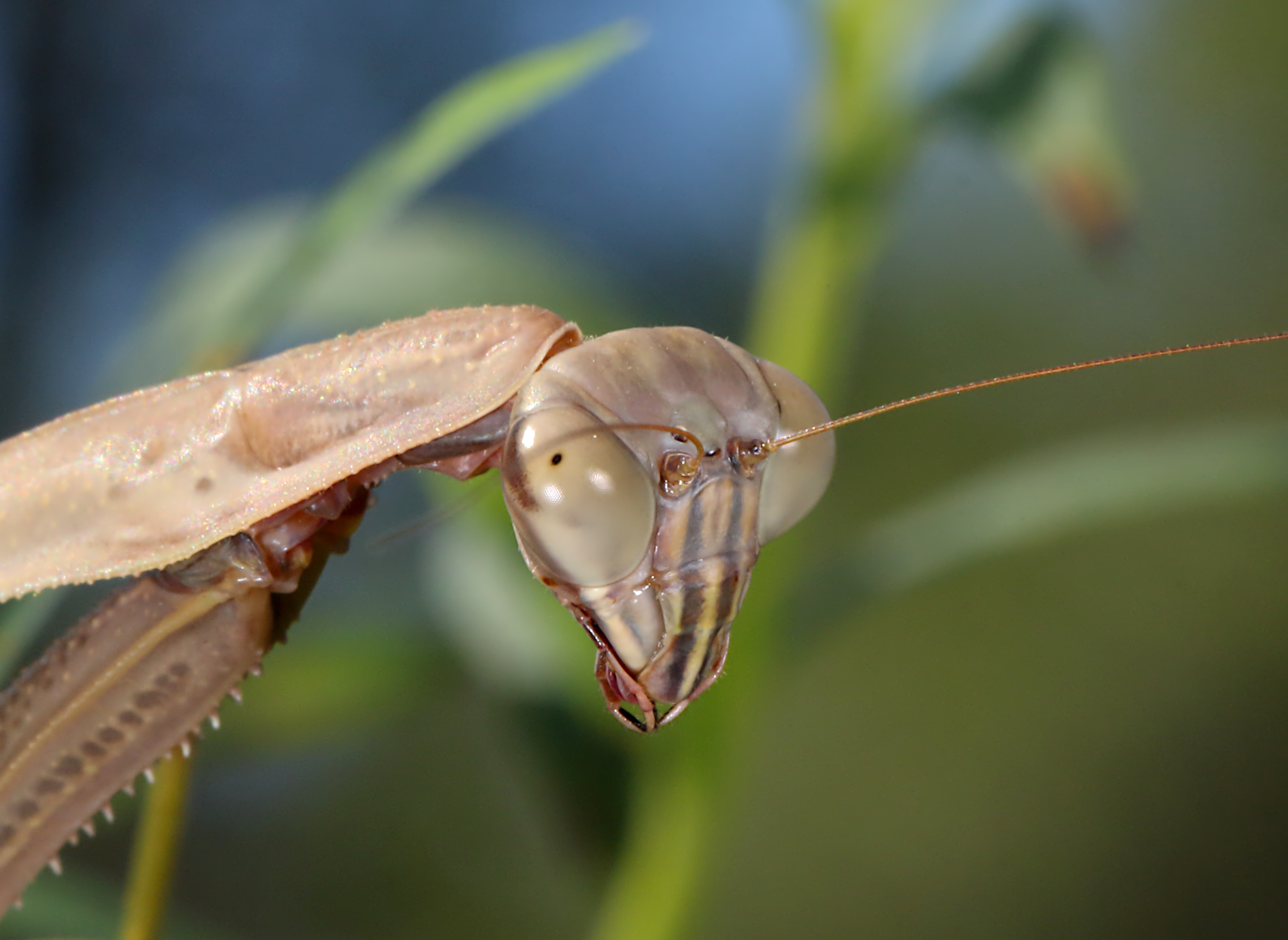