This article in Quillette caught my eye because it was about science—paleoanthropology—and its conflict with faith. The authors are a pair of anthropologists who have written a book about the topic, which is the perennial conflict between scientists on the one hand and Native Americans claiming ancient human remains that, they say, are their ancestors. 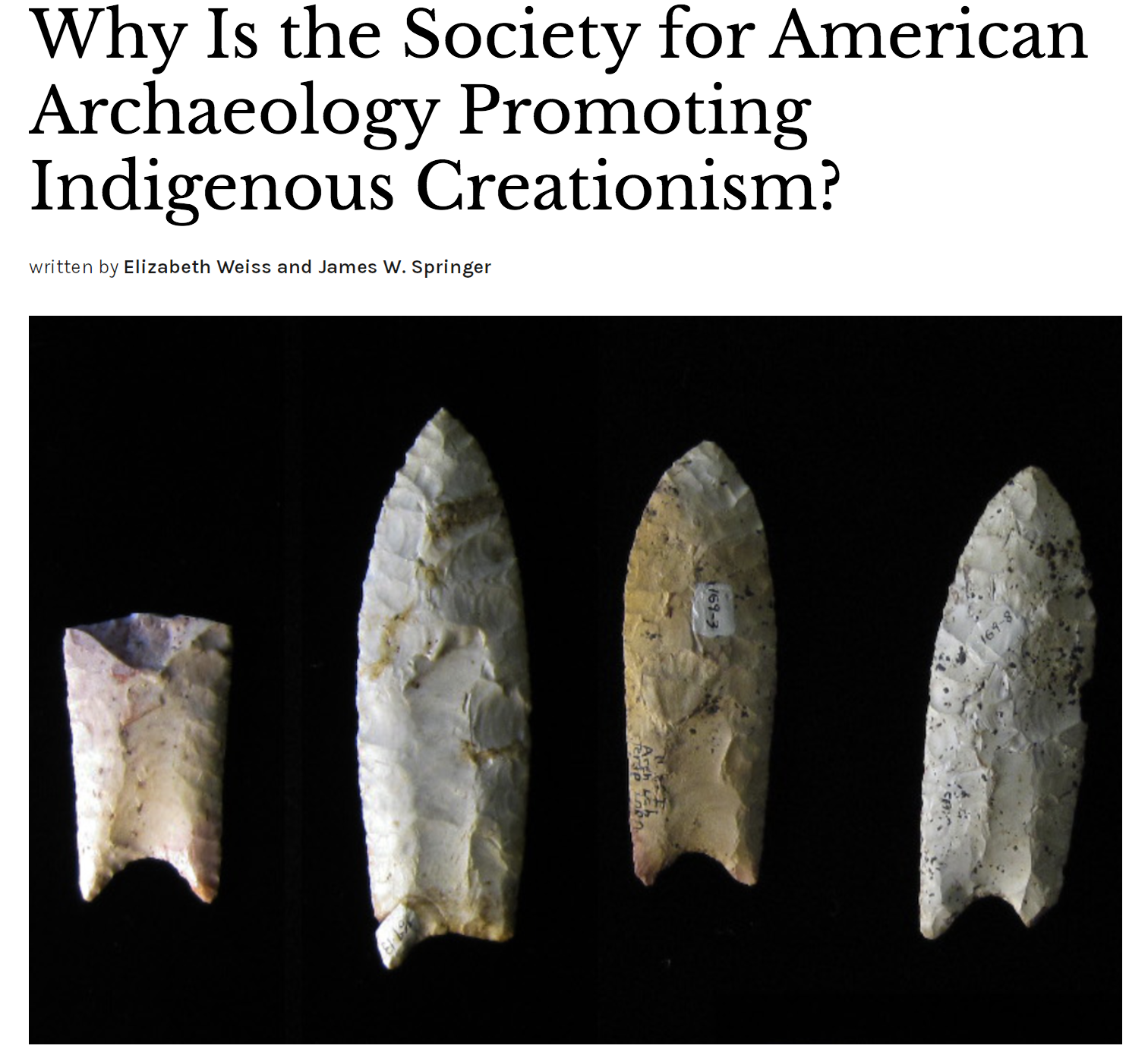 The title refers to a meeting of the SAA in April when Weiss gave a talk about the obstructionism of Native American creation myths as they affect paleoanthropology in North America. Although the talk is certainly germane, and provides food for thought (see below), it was in effect “erased” by the SAA, who refused to post it despite their pledge to do so. It was the only talk that wasn’t posted. The reason is clear: going up against the claims of Native Americans, even if those claims can’t be supported, is a no-win situation. As Weiss writes:

The new SAA president, Deborah Nichols, subsequently contacted me to let me know that the video of our live talk would not be posted by the SAA for others to view, due to reports of hurt feelings. (We had previously relied on the SAA’s emailed assurance to presenters that “sessions will be available for viewing on demand within 24–36 hours after their original broadcast, until July 17, 2021.”) Furthermore, we learned, the SAA would not even provide us with the video. (And so we re-recorded the talk, which you can find here.) Another SAA statement was then put out to inform readers that “the SAA board finds the presentation does not align with SAA’s values,” and mentioned that “the board categorically rejects the Weiss-Springer position.”

Here’s the 13-minute talk that Weiss re-recorded after the SAA refused to post it:

There was substantial other pushback on both professional and social media. Here’s an example of a reaction by an “indigenous archeologist” to Weiss’s abstract of the talk: archaeologist.”

Why was this abstract accepted @SAAorg? This is completely unacceptable and anti-Indigenous. This is why people are leaving your organization. Stop giving this type of work a platform. pic.twitter.com/L2zSXMjPyt

Well, we all know about these conflicts, and it’s conceivable that for some of them the Native Americans have a right to the bones and artifacts found by archaeologists, who of course lose the chance to study them.  But in most cases that “right” is dubious, for the genetic connection between those claiming the bones and the person whose bones are claimed is tenuous at best. Often it rests solely on creation myths: many Native Americans claim that despite scientific evidence that the Americas were populated by “modern” H. sapiens who crossed the Bering Strait from Asia about 15,000 years ago, their ancestors have lived in America forever. Further, to establish that the bones belong to a specific tribe is almost impossible, because bones from people of multiple “tribes” have been found in one locality, and there was considerable migration within North and South America.

Genetic analysis could conceivably settle the question, but without the bones you don’t have the DNA, and even so it’s hard to narrow down ancient DNA to a specific existing group of Native Americans, who are fairly closely related to each other. It’s even worse because the U.S. government passed laws saying that establishing ancestral (i.e., genetic) affinity isn’t necessary: “cultural evidence”, like oral traditions and creation myths, is sufficient. That immediately puts science at loggerheads with superstitions, superstitions that can be demonstrably incorrect.

As an example, Weiss and Springer discuss the famous Kennewick Man, 8,400- year-old remains of a man found in 1996 in Kennewick, Washington. It’s one of the most complete ancient North American skeletons ever found (see photos at bottom), and dates pretty close to the time when Asians began populating the Americas. But the remains were claimed by several tribes of Native Americans, although, according to the authors “the oldest known American tribe, the Hopi, reliably dates its history to only about 2,000 years ago.”

This started a decade-long court case between Native Americans, scientists, and the U.S. Army Corps of Engineers.  The case wasn’t resolved until 2004, and in favor of the scientists, though the remains have since been returned to a “coalition of Pacific Basin tribes” for reburial.

In the meantime, scientific studies of the skeleton, including use of DNA, showed that it was actually more closely related to “modern American Indian populations of Central and South America who are not ‘Native American'” by the U.S. government’s regulations. Using ancestry rather than creation myths, those other populations would have a stronger claim to the bones than would North American tribes.

In the meantime, scientists were able to find out a great deal of information from the skeleton. As the article states,

The greatly delayed scientific study was finally carried out, and the result was a magnificent peer-reviewed 2014 volume, edited by Jantz and Douglas Owsley of the Smithsonian Institution, titled: Kennewick Man: The Scientific Investigation of an Ancient American Skeleton. The studies revealed Kennewick Man’s age, sex, bone morphology, and bone chemistry, as well as modifications to the skeleton incurred during his life. This information, in turn, allowed inferences as to his food intake, food production, and other physical activities, and diseases and injuries he’d endured.

His affinities with other prehistoric and modern populations and individuals were also revealed by these studies. Kennewick Man’s dietary reconstruction from nitrogen isotopes (elements found in a variety of food sources that settle in bones and teeth, and which can be used to reconstruct eating and weaning patterns) revealed a diet composed mainly of marine foods. This differed from the previous view of Paleoindians as big game hunters. Kennewick Man also had bony growths in his ear canals called external auditory exostoses, which some have argued may have impacted his hearing and were related to chronic ear infections.

Kennewick Man had multiple injuries—including a projectile point (a spear head) in his pelvic bone. Chatters argued that this injury never healed properly and likely caused lifelong pain. Anthropologist Della Cook, on the other hand, suggested that the lack of reactive bone (which is evidence of bone healing from injury or infection) in the CT-scans suggests that Kennewick Man’s injury healed quickly. Interestingly, these two perspectives were both published in this 2014 book—an example of the open-minded manner in which science should be conducted and evaluated.

All of this information would have been lost had the repatriationists been successful. No other Paleoindian is as well studied as Kennewick Man, and many were reburied with just a simple osteological report. Such reports may include only the remains’ antiquity, sex, estimated age, and other basic information; and often are written up by undertrained students and marginal scholars who are not subject to peer review, and who do not report their findings in a way that contemporaries can validate. . .

Weiss and Springer describe other cases in which cultural tradition blocked scientific study, as well as scientific study that did succeed in finding out stuff about early Native Americans.

So what should the rule be? Of course, as a scientist who values scientific fact over creation myths or oral tradition, I’m biased in favor of empirical study. But if remains can be traced to a specific tribe or group of tribes, showing the bones to be more closely related to that group than to other tribes, one might consider tribal claims to be valid.  Even so, perhaps there should be an allowed period of scientific study, say two years, before the remains are returned to present-day tribes for reburial or various rites. After all, it’s not as if these bones belong to a present family of Native Americans, like the remains of someone’s son recovered and returned after a battle.

But I don’t think that claims based only on “oral tradition” or “creation myths,” should be honored at all. In such a case, the remains should then be available to scientists. After all, if we honor such superstitious claims, we are also tacitly honoring the creation myths of anybody, including Christians, Scientologists, and Muslims, each of which has its own creation story. That is government entanglement with religion.

And it’s a double entanglement: one with the myths of Native American groups, and the other with the religion of Wokeism, which makes the SAA into an organization that renders decisions based not on empirical considerations, but on ideology and identity politics.

Here’s the skeleton and skull of Kennewick Man: 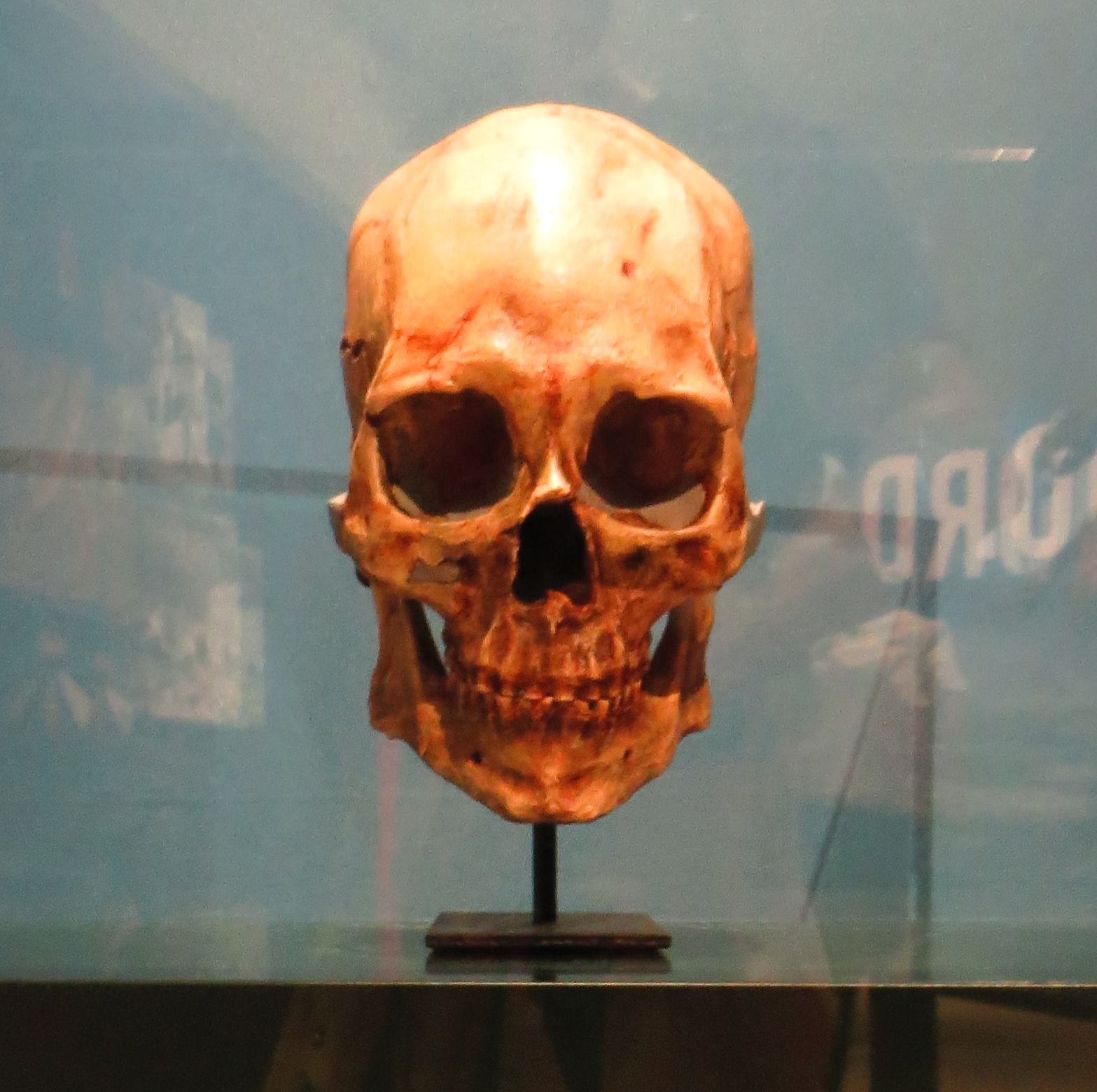 65 thoughts on “Faith versus fact: the problem of Native American creationism and paleoanthropology in North America”