In the latest “Long Read” of the Guardian (which, to be honest, could have been considerably shorter), Gary Younge defends this view: not just statues of historically nefarious people should come down, but that all statues should come down. No person should, he claims, be memorialized with an effigy, though events themselves might. But no statues of people, whoever they may have been.

Right off the bat Younge identifies himself as a “black leftwing Guardian columnist for more than two decades”. Such is how people establish their credibility these days, though, to be sure, Younge’s background shouldn’t really count one way or another. But when he argues against putting up statues of people like Rosa Parks, you can be sure that his remarks don’t stem from ideological bias. 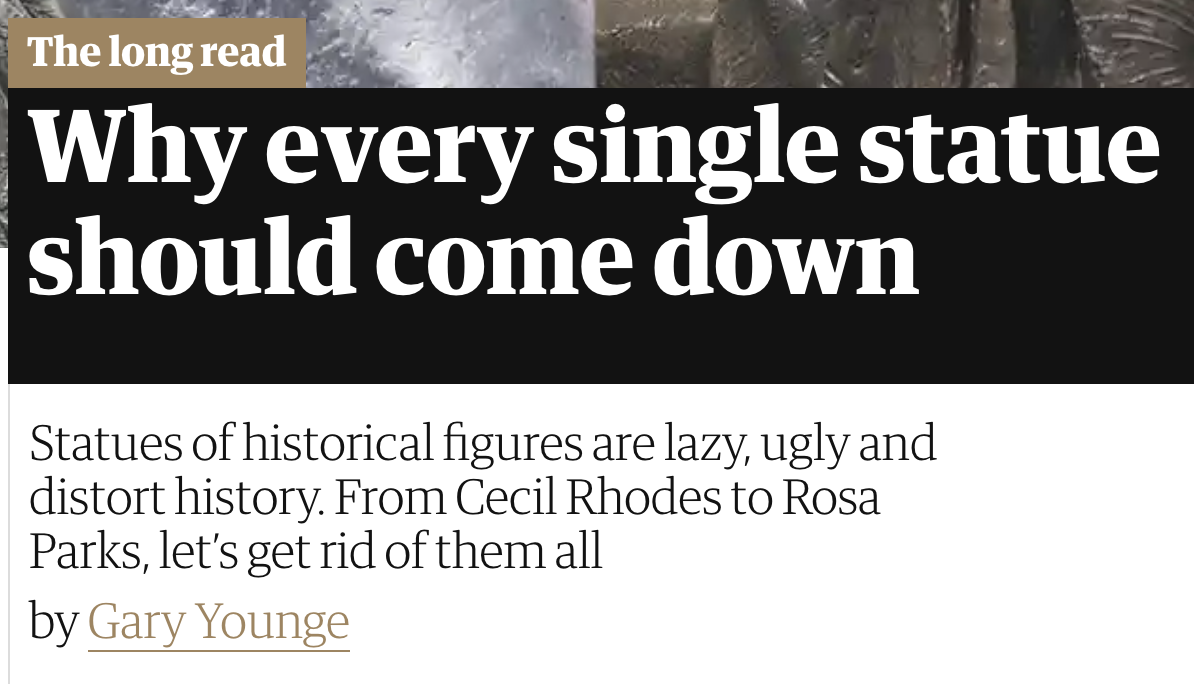 Here are the reasons why Younge wants every statue toppled. Quotes from the article are indented:

a.) Status are lazy and ugly, especially when they’re of people. I don’t really agree and can think of some notable exceptions, one being the statue of Lincoln in his eponymous Washington D.C. memorial. And what about the Statue of Liberty? (Well, that’s not a real person. . . ) Do religious statues count? And what about, for example, the great statue of Augustus Prima Porta in Vatican City? But Younge thinks they’re all “poor as works of public art”. Younge doesn’t, however, think this is true of other public memorials, mentioning the lovely Vietnam Veterans Memorial in Washington, D. C.

c.) Statues don’t erase history because they are not themselves history. They show an individual who may have helped make history, good or bad, but Younge doesn’t subscribe to the “Great Man” (and Women) theory of history as promoted by Thomas Carlyle and attacked by Tolstoy in books like War and Peace. A quote:

Statues are not history; they represent historical figures. They may have been set up to mark a person’s historical contribution, but they are not themselves history. If you take down Nelson Mandela’s bust on London’s South Bank, you do not erase the history of the anti-apartheid struggle. Statues are symbols of reverence; they are not symbols of history. They elevate an individual from a historical moment and celebrate them.

Nobody thinks that when Iraqis removed statues of Saddam Hussein from around the country they wanted him to be forgotten. Quite the opposite. They wanted him, and his crimes, to be remembered. They just didn’t want him to be revered. Indeed, if the people removing a statue are trying to erase history, then they are very bad at it. For if the erection of a statue is a fact of history, then removing it is no less so. It can also do far more to raise awareness of history. More people know about Colston and what he did as a result of his statue being taken down than ever did as a result of it being put up. Indeed, the very people campaigning to take down the symbols of colonialism and slavery are the same ones who want more to be taught about colonialism and slavery in schools. The ones who want to keep them up are generally the ones who would prefer we didn’t study what these people actually did.

. . . Statues always tell us more about the values of the period when they were put up than about the story of the person depicted. Two years before Martin Luther King’s death, a poll showed that the majority of Americans viewed him unfavourably. Four decades later, when Barack Obama unveiled a memorial to King in Washington DC, 91% of Americans approved. Rather than teaching us about the past, his statue distorts history.

But isn’t remembering “values of the past” a useful exercise as well?

d.) By memorializing specific individuals, statues “erase” or “marginalize” important people involved in the same or similar  historical events. For this Younge uses the case of Rosa Parks:

Consider the statue of Rosa Parks that stands in the US Capitol. Parks was a great woman, whose refusal to give up her seat for a white woman on a bus in Montgomery, Alabama challenged local segregation laws and sparked the civil rights movement. When Parks died in 2005, her funeral was attended by thousands, and her contribution to the civil rights struggle was eulogised around the world.

But the reality is more complex. Parks was not the first to plead not guilty after resisting Montgomery’s segregation laws on its buses. Before Parks, there was a 15-year-old girl named Claudette Colvin. Colvin was all set to be the icon of the civil rights movement until she fell pregnant. Because she was an unmarried teenager, she was dropped by the conservative elders of the local church, who were key leaders of the movement. When I interviewed Colvin 20 years ago, she was just getting by as a nurses’ aide and living in the Bronx, all but forgotten.

And while what Parks did was a catalyst for resistance, the event that forced the segregationists to climb down wasn’t the work of one individual in a single moment, but the year-longcollective efforts of African Americans in Montgomery who boycotted the buses – maids and gardeners who walked miles in sun and rain, despite intimidation, those who carpooled to get people where they needed to go, those who sacrificed their time and effort for the cause. The unknown soldiers of civil rights. These are the people who made it happen. Where is their statue? Where is their place in history? How easily and wilfully the main actors can be relegated to faceless extras.

Again, I’m not fully on board here. When I see a statue of Rosa Parks, I don’t think of her in particular, but of the Montgomery Bus Boycott in general, and of the cooperation of the black community that eventually brought the bus company to its knees and ended segregation on Montgomery buses. Where is the statue to the “unknown soldiers of civil rights”? Well, look no further than the National Civil Rights Museum in Memphis, the National Museum of African American History and Culture in Washington, D.C., and the new Legacy Museum in Montgomery.   There are several others as well.

I’ll ask other readers to agree or disagree with Younge’s thesis, and to name statues, if you like them, that you think should stay up. I’ll end her with Younge’s last two paragraphs:

Of course I want Parks to be remembered. Of course I want her to take her rightful place in history. All the less reason to diminish that memory by casting her in bronze and erecting her beyond memory.

So let us not burden future generations with the weight of our faulty memory and the lies of our partial mythology. Let us not put up the people we ostensibly cherish so that they can be forgotten and ignored. Let us elevate them, and others – in the curriculum, through scholarships and museums. Let us subject them to the critiques they deserve, which may convert them from inert models of their former selves to the complex, and often flawed, people that they were. Let us fight to embed the values of those we admire in our politics and our culture. Let’s cover their anniversaries in the media and set them in tests. But the last thing we should do is cover their likeness in concrete and set them in stone.

Here’s a statue of Rosa Parks erected in the U.S. Capitol n 2013 and dedicated by Barack Obama (you can see a video of his remarks here). 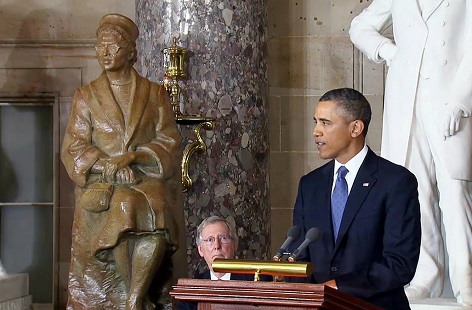 48 thoughts on “Guardian: All statues should come down, no matter whom they depict”