Today’s photos come from Doug Hayes of Richmond, Virginia, famed for his “The Breakfast Crew” series of bird photos. Today he has something different: a woodpecker named “Peanut Girl.” His captions are indented, and click on the photos to enlarge them.

Things have been a bit quiet around the yard as members of the Breakfast Crew retreated to the wooded areas around our Forest Hill (Richmond, VA) neighborhood to tend to their nests and raise a new crop of babies.  This week, the first of the little ones have appeared in the yard. Cuteness to follow as I get pictures. Meanwhile, here are some photos of one of the crew.

Peanut Girl is a member of the Breakfast Crew and one of several red-bellied woodpeckers (Melanerpes carolinus) who frequent the yard. Unlike the other woodpeckers who only eat suet, Peanut Girl goes to the seed feeders and digs around until she finds a peanut. Once located, she snags it and flies off to somewhere in the trees and eats it. A few minutes later, she returns and repeats the process. This goes on several times during the morning.  Peanut Girl will eat suet when I fill the feeders with red pepper flavored suet. She does not seem interested in the lard-based or even the peanut butter suet.

Peanut girl digging for peanuts and discarding everything else. She will study the feeder tube and peer into the openings to see if there are peanuts inside. She has learned that if she tosses away enough of the other seeds, she will get one of her favorites. 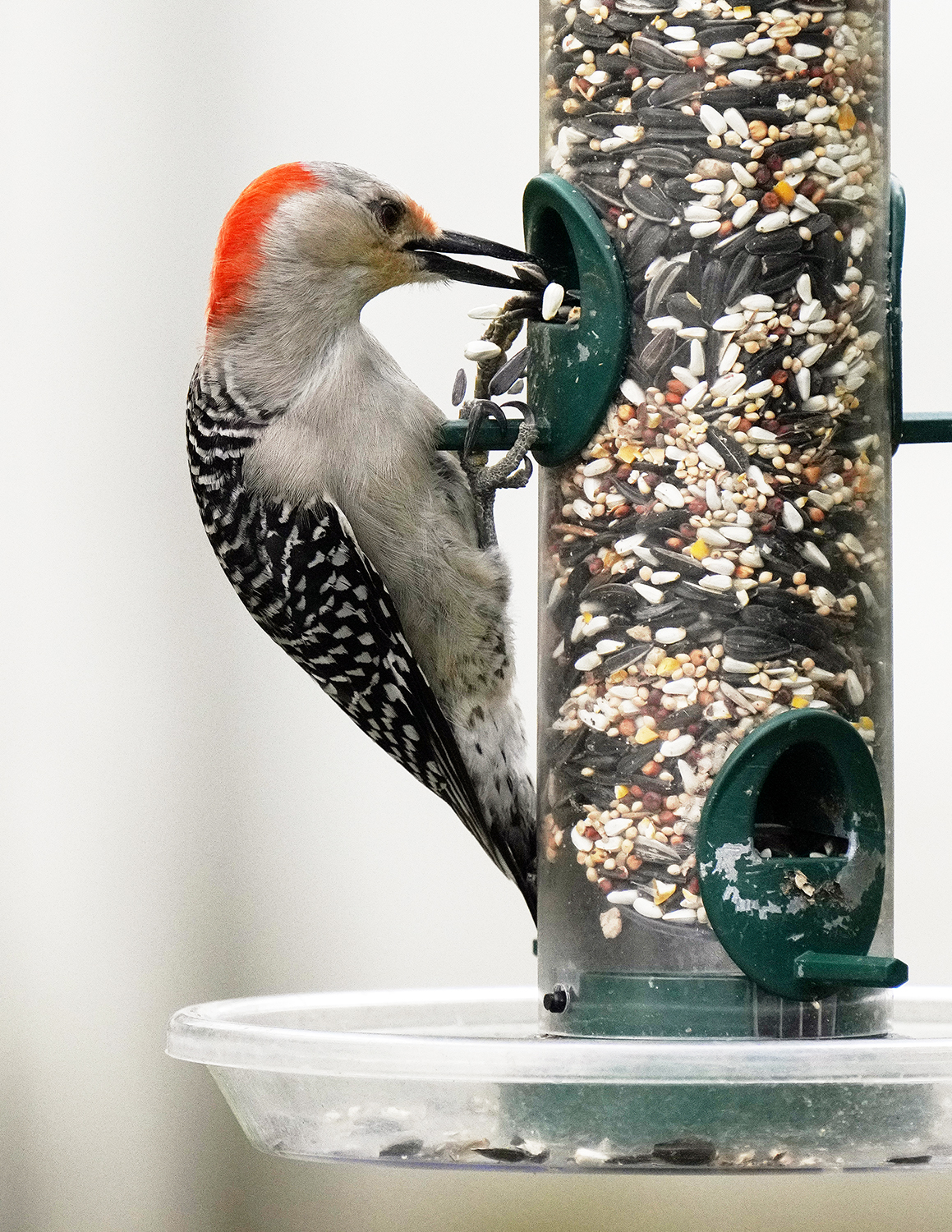 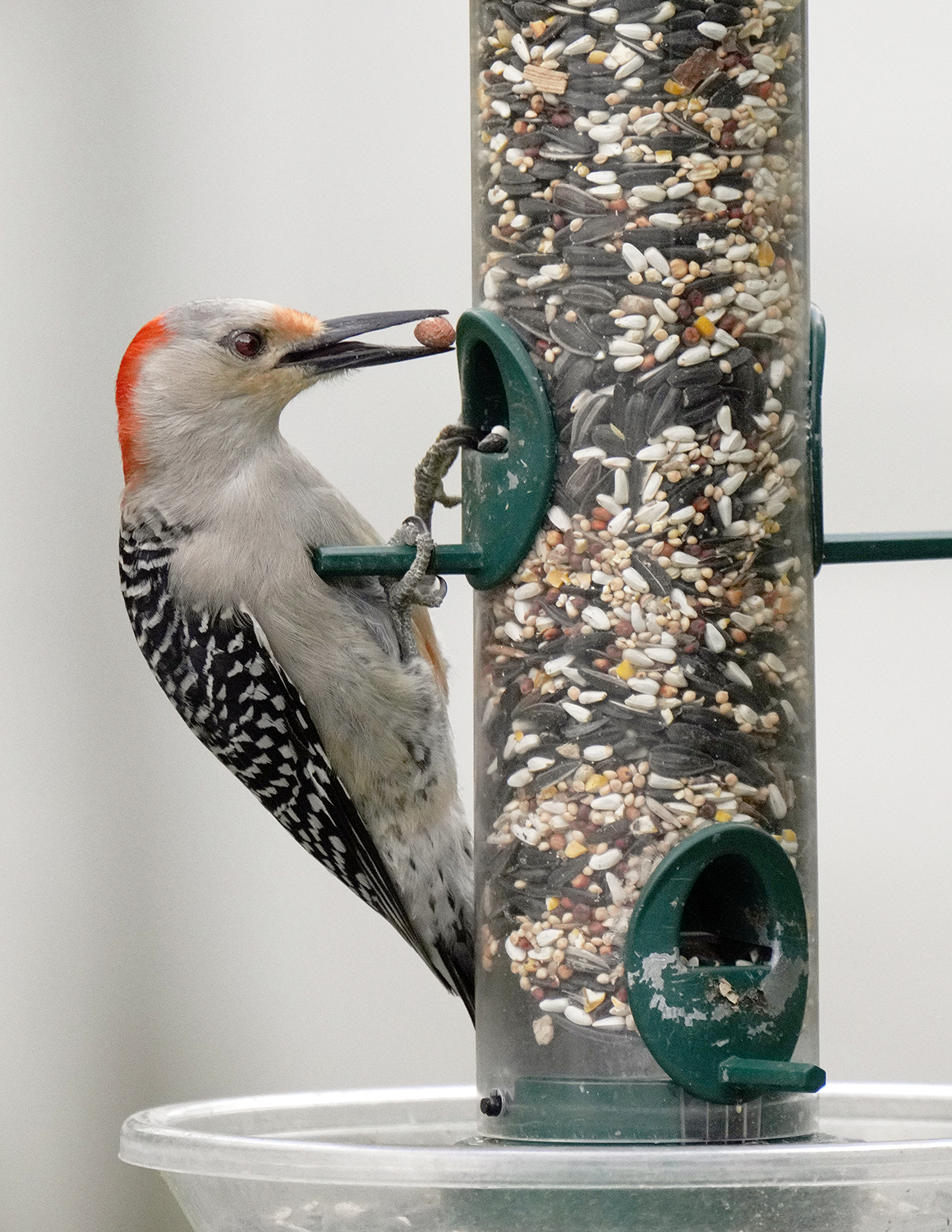 I call this her victory pose. She does this every time she finds a peanut. Seconds later, she heads off into the trees to eat. 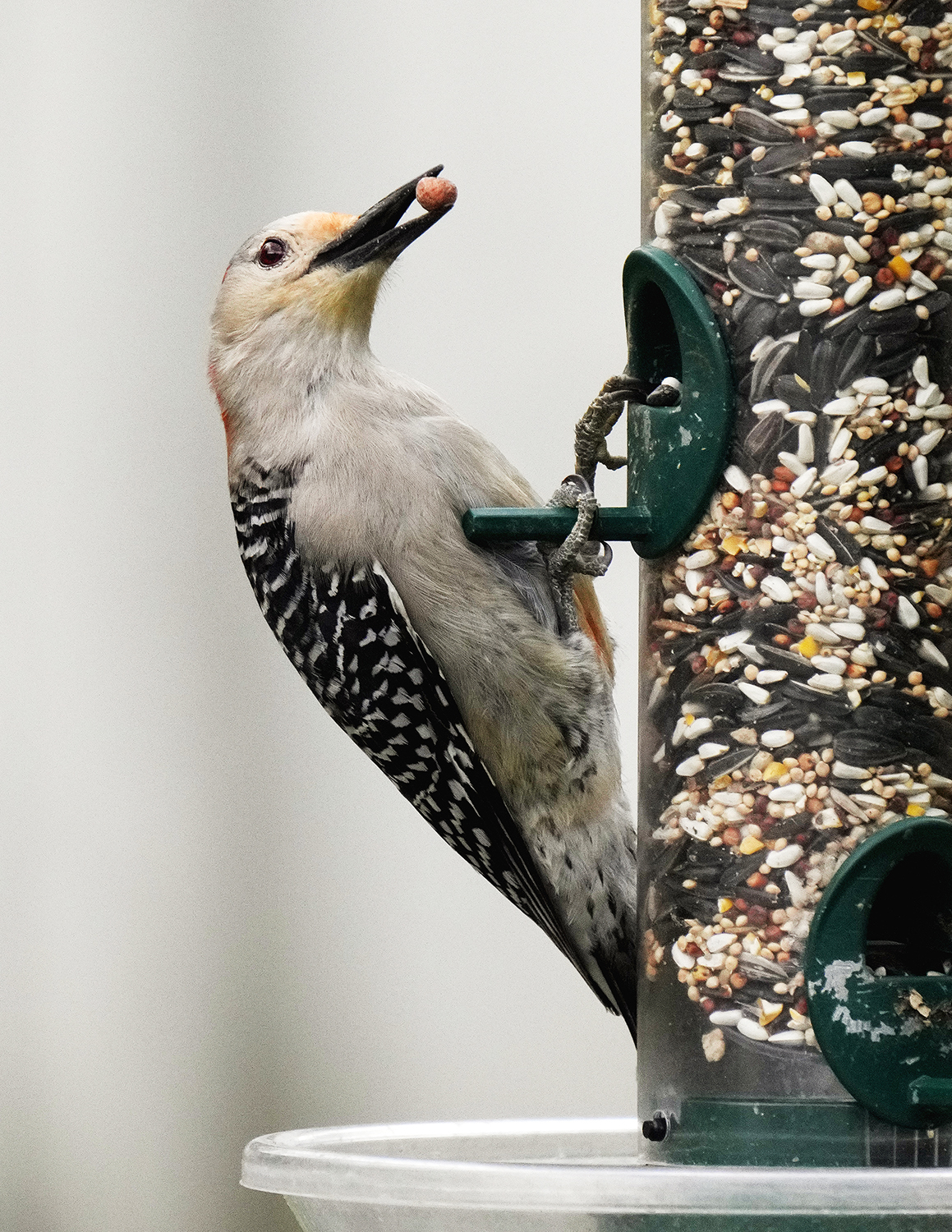 About 15 minutes later, Peanut Girl returned. Sometimes she will drive away other birds so that she can hunt for peanuts without distraction. This time she ignored the sparrow at the feeder. 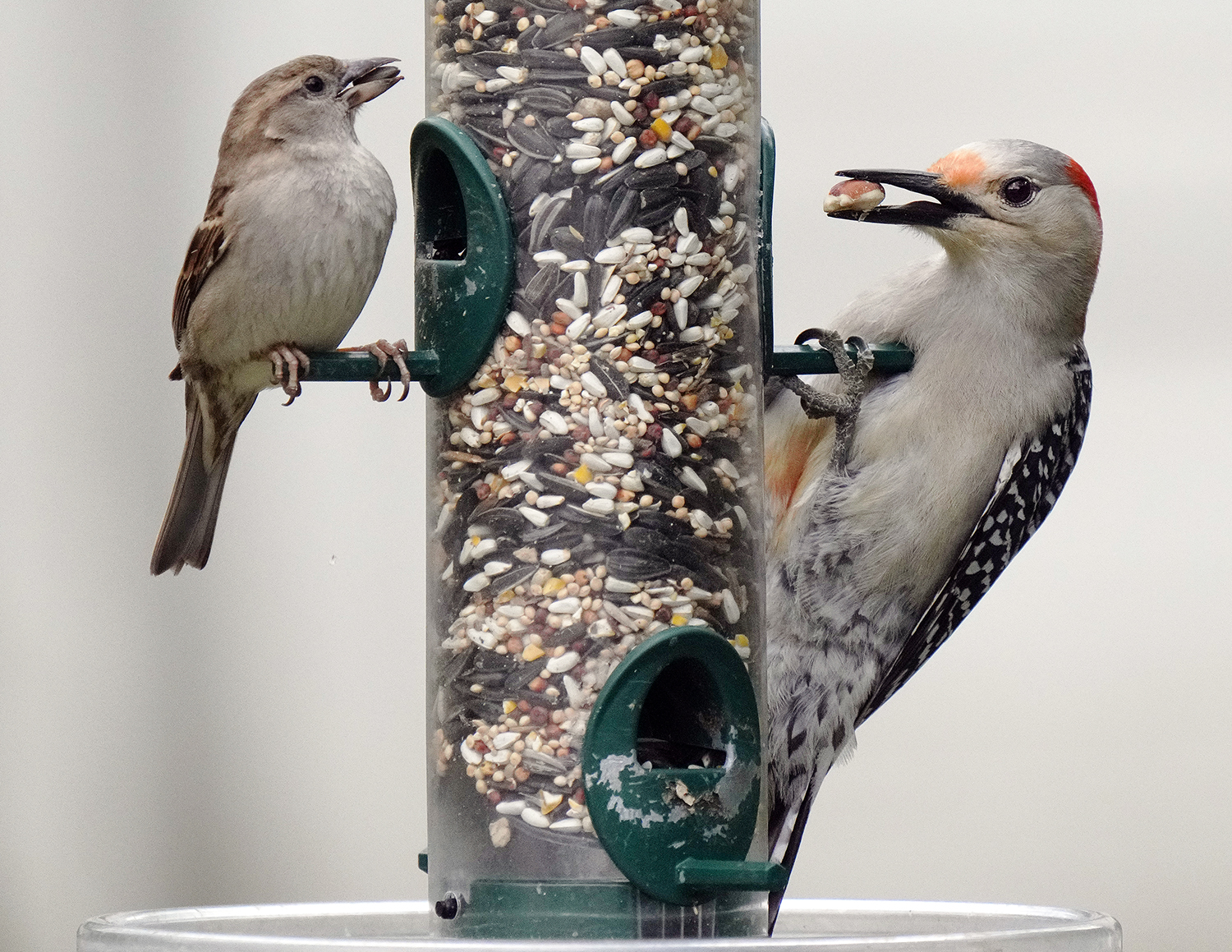 Another peanut! And she’s off to the trees to enjoy her treat. 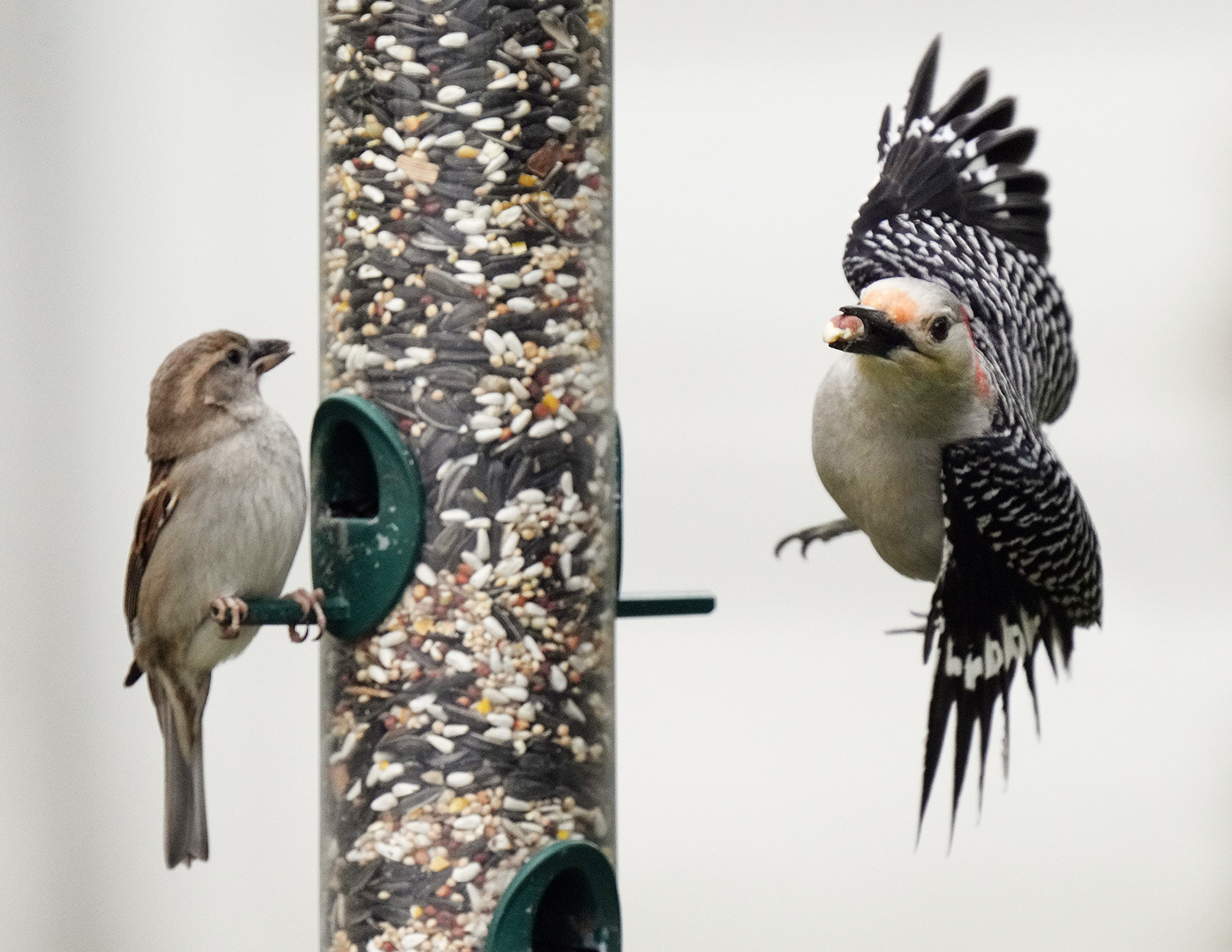 Peanut girl enjoying some red pepper suet. She will grab a big chunk and fly away with it. 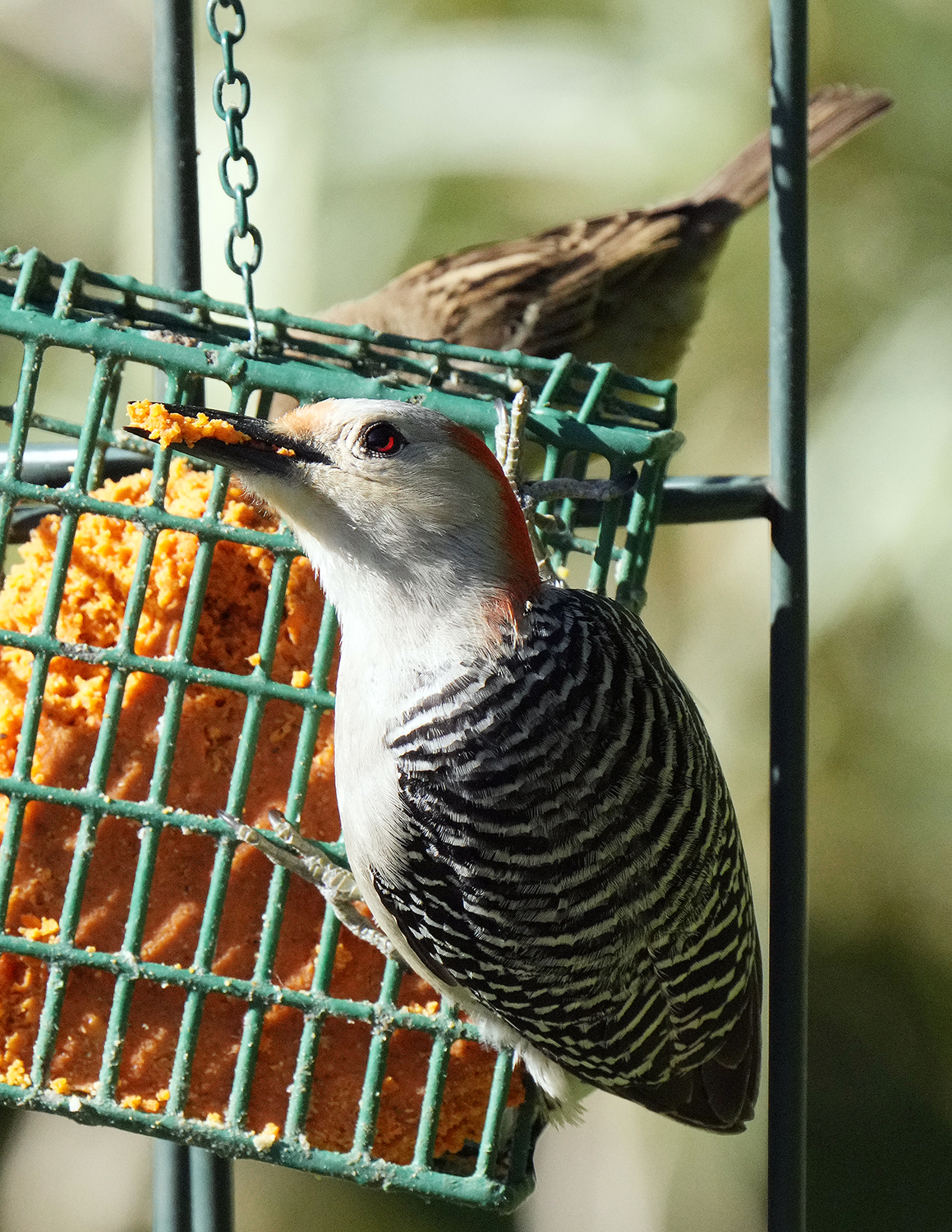 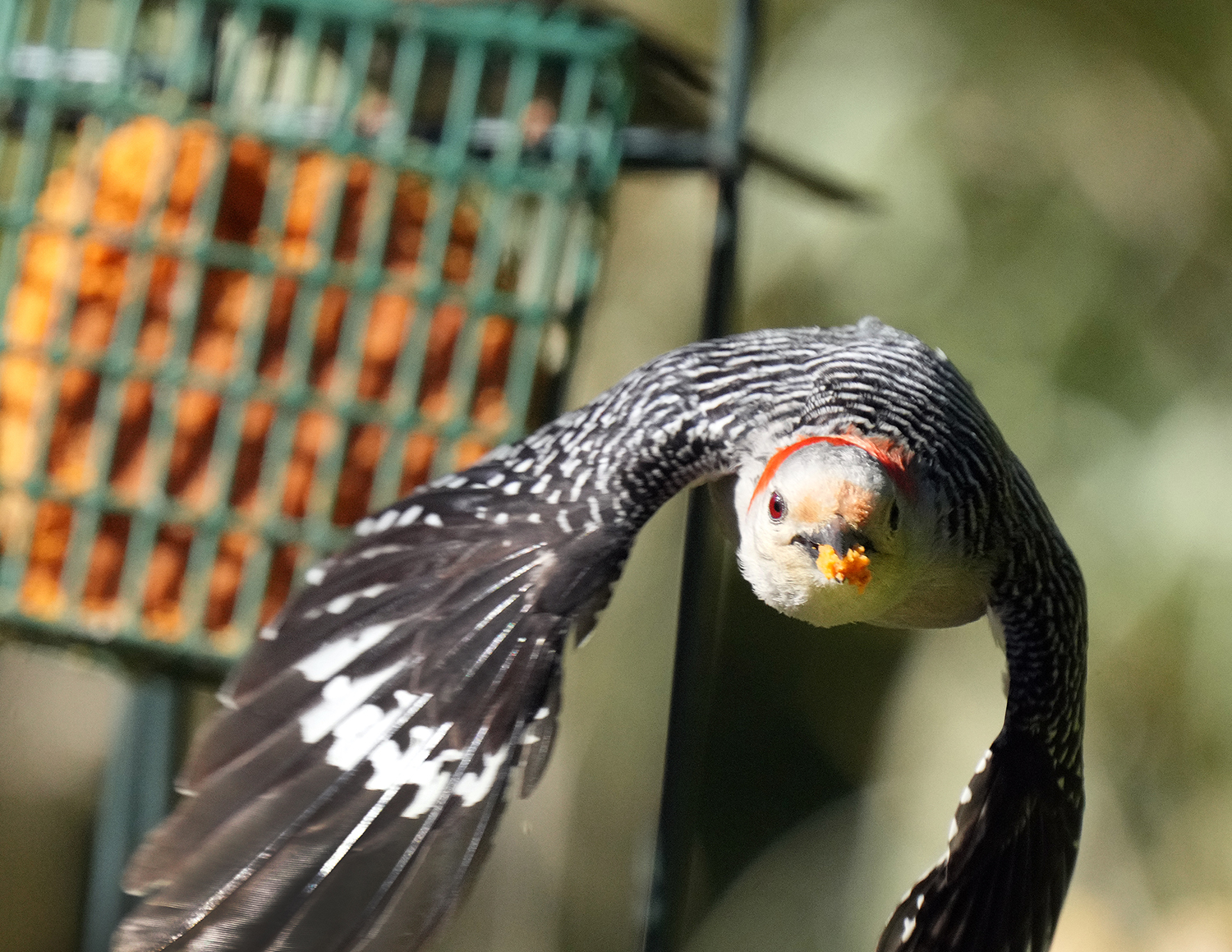 Camera information:  I recently moved up to the Sony Alpha 1 mirrorless camera body. This camera is Sony’s flagship model, optimized for sports and wildlife photography. One of the neat features is bird eye detection autofocus (the options are human, animal and bird eye autofocus). The camera is capable of recognizing and tracking the subject’s eyes and making 120 continuous autofocus adjustments per second (if the subject is too far away or the eyes are not visible, the camera switches to body shape recognition). Sony A1 body, Sony FE 200-600 zoom lens plus 1.4X teleconverter, f/10, 1/1600th, ISO 3200, camera supported on an iFootage Cobra 2 monopod and gimbal tripod head.