There is seemingly no academic field—not  even in the sciences—that’s immune from being forced to board the social-justice juggernaut. The latest is organic chemistry, and I found out about it from the letter below that just appeared in Science (click on screenshot). The letter is by Melissa McCartney, Assistant Professor in the Department of Biology and the STEM Transformation Institute at Florida International University. 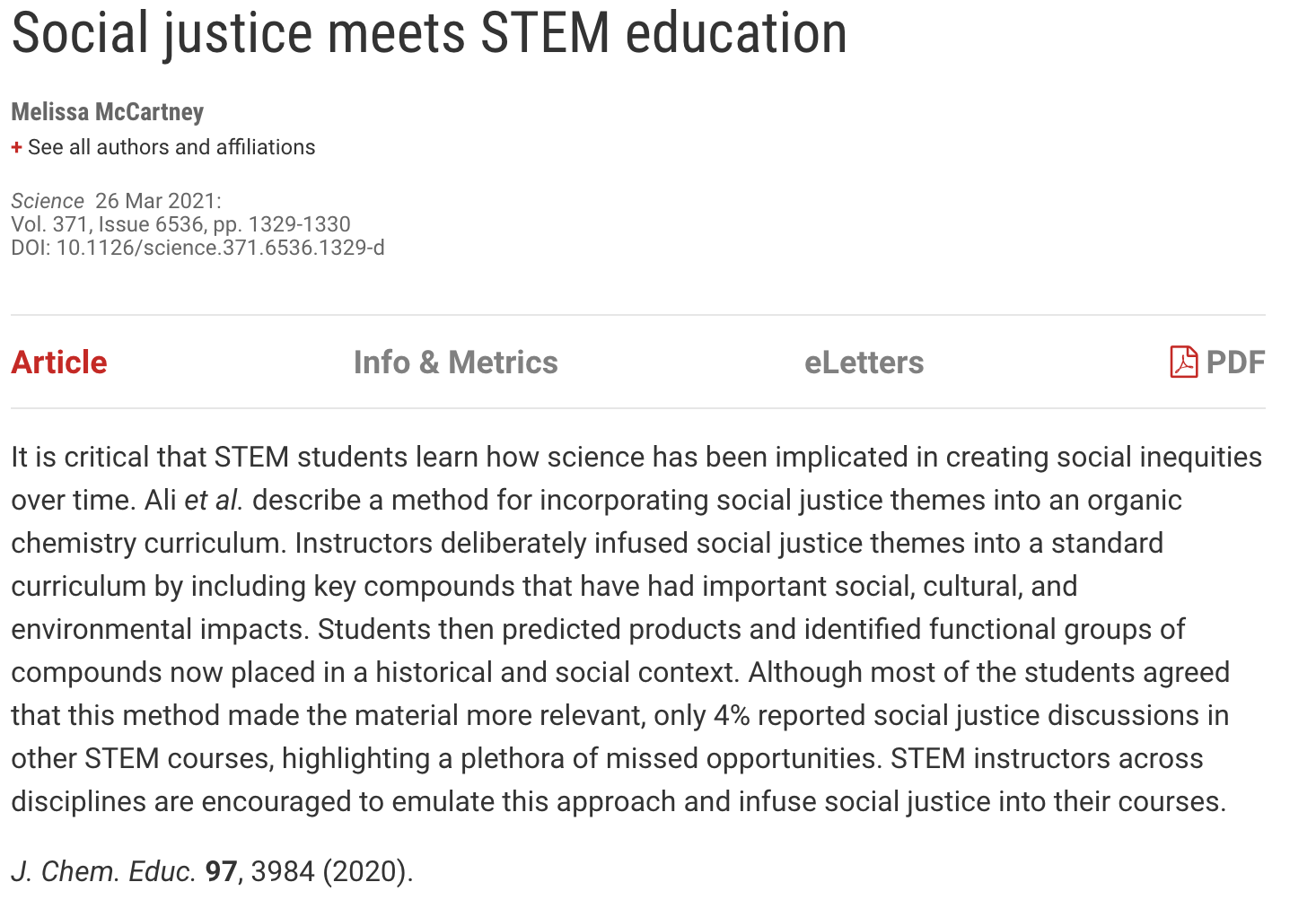 So of course I had to look up the original article in the Journal of Chemical Education, which is free online (click on screenshot, pdf here).  The authors teach organic chemistry at Reed College in Oregon, a private liberal arts school that is among the five or six wokest colleges in America (think The Evergreen State College format). Do be mindful of that when you read about the student approbation for infusing social justice into the second semester of the class.

There are several ways they infuse social justice into the class, one of which seems harmless. The others, however, hijack the class to teach the students not only the social history of organic compounds, but to clearly impart to them an ideology based on Critical Theory.  The introduction shows the social motivations for the class:

Without engagement with equity issues, the standard curriculum produces students who may lack civic mindedness in their approach to science. We believe that young scientists should be invited to contemplate their work with a “systems thinking approach” and consider chemistry’s potential impacts beyond intention. Unfortunately, progressive discourse regarding these shortcomings in chemistry curricula is often overlooked, perhaps due to the misperception that science is somehow intrinsically “good”.

There’s nothing wrong with mentioning the social impact of various chemical compounds, but there is something wrong with using the class to foster “progressive discourse”, which in this case means Critical Theory discourse.  Not only does that constitute a form of propaganda for the teachers’ political views, but it also takes time away from learning chemistry itself. It’s clear from the article that the “social justice” implications aren’t just mentioned tangentially, but occupy 5-10% of the course, and will occupy more in the future.

In contrast to the dogma that science is “good”, chemists have historically produced compounds that are harmful to both humans and the environment. Examples of these harms are widespread and disproportionately affect economically disadvantaged areas. For example, over 30 years ago, an accident at the Union Carbide plant in Bhopal, India, was responsible for releasing poisonous gases into the local environment and atmosphere.(4) Reports described the release as containing 30–40 tons of methyl isocyanate and other toxic chemicals. Nearly 4000 residents of the surrounding tenements were killed immediately. For the remaining residents, the full long-term health consequences of the chemical exposure, including premature death, are still unknown.(5) Assessing the true costs of accidents such as the Bhopal disaster requires a full systems thinking evaluation. What were the early and late effects of exposure? What are the impacts of indirect contact? How have the toxic materials migrated and persisted in the local environment? Have these reactive compounds been transformed into other chemical entities with a new set of impacts and effects?

Seriously? The people who devised the synthesis of these compounds, and even that of Zyklon B (hydrogen cyanide), coopted to to kill Jews in Nazi concentration camps, didn’t aim to create harm (it was created to be used as a pesticide, which began in California in the 1880s). Harm was either due to the acts of bad people, a byproduct of the chemical’s poor storage, as in Bhopal, or an unintended consequence of drugs (the side effects of birth-control pills). Teaching this way gives the impression to students that science is “bad”, a general attitude of both postmodernism and Critical Theory, which dislike science because of its ability to find real truths.

But science itself isn’t “bad”: it is people who decide to use it in a bad way, or, when there are unintended side effects, it’s simply bad luck. Should they teach about the construction of gas chambers in architecture class to show that architecture is not “good”? Almost every discipline could be demonized in this way. Genetics could show that that science is bad by discussing how it was misused by the Soviet agronomist and charlatan Lysenko to derail Russian agriculture, which led to the starvation of millions.

And below is the goal of the professors: enhancing “equity”, which is proportional representation, not equal opportunity:

We aimed to briefly highlight how organic chemicals can be an instrument for enhancing equity, simultaneously stimulating awareness of the injustices and injuries that can be promoted by the misuse of chemicals.

How do they infuse social justice into Reed’s organic chemistry class? They talk about molecules that have social import—usually having a bad effect on minorities. These include birth control pills (has led to “serious environmental contamination”), antiretroviral drugs, and THC, active ingredient of marijuana. But whenever you can insert social justice, even if it’s not relevant to learning organic chemistry itself, they do. Here are the lessons they impart:

In a recent study, 35% of the countries with available data reported having a majority of people (over 50%) with “discriminatory attitudes” toward those living with HIV. This prejudice persists despite the fact that current antiretroviral therapy is able to suppress viral loads to undetectable and below transmittable levels. The stigma and discrimination against people living with HIV leads to marginalization (social, economic, and legal), which in turn can cause poor social, emotional, and physical well-being. These negative impacts on general well-being are correlated with lack of treatment.

The dark side of the cannabanoids is that they have been used to systematically incarcerate African-Americans. During the “War on Drugs” in the 1980s, drug-related arrests rose 126%. African-Americans account for 35% of drug arrests, 55% of convictions, and 74% of people sent to prison for drug possession crimes. The incarceration rate is 13 times higher than that of other races, despite African-Americans only comprising 13% of regular drug users. Furthermore, there are collateral consequences to drug arrests. Many states will suspend the driver’s licenses of offenders for at least six months, irrespective of if a car was involved in the crime.

If this has anything at all to do with chemistry, it defies me. And I’m absolutely positive that Reed students have the chance to learn this kind of material in many other classes. What the professors are doing here is using chemistry as a convenient excuse to discuss oppression and marginalization.

Now the okay part of using these particular molecules is that they can be enlisted to demonstrate real principles in organic chemistry, but of course other molecules may do that, and do it even better. Here’s one innocuous quiz question that follows the social-justice indoctrination (they could hardly ask about social justice itself on chemistry tests). It’s about an antiretroviral drug used to treat AIDS:

Finally, surveys of students at the end of the course show that many or most of them think that it’s important to learn about the social justice impacts of chemical compounds, that so this material makes them “into more responsible scientists”, makes the material more relevant, and keeps the students engaged. Of course, using other molecules can create the same relevance (e.g., caffeine, penicillin, alcohol), but those molecules can’t be used to teach social justice.

And of course the Critical Theory material helps the students learn exactly what social justice is—at least, the conception that their professors hold:

Note that there is no “control” class in which socially important molecules like antibiotics or caffeine are used instead of ones that can be tied to oppression. More important, there is no assessment of whether students exposed to this kind of political material turn into better organic chemists or learn the course material better. All we have is the self-report of students who are mostly self-selected, by going to Reed, to be on the “progressive Left.”

But wait! The social-justice bit is going to expand:

In the future, we hope to address other timely issues such as the use of ethanol as biofuel, which was intended as an environmentally friendly alternative, but instead increased the risk of air pollution deaths relative to gasoline by 9% in Los Angeles. An entire class could be dedicated to addressing the impact of another supposedly sustainable biofuel, palm oil. While palm oil production has driven economic growth in Central and South America, “the methane produced by a typical palm oil lagoon has the same annual climate impact as driving 22,000 passenger cars.” We also would like to include a systems thinking approach to evaluating medications, as many of them can have harmful effects on animals and the environment upon excretion from the body.

Perhaps they might want to talk about the positive social effects of organic chemistry as well! Why is that left out? Because they want to show the students the bad effects of science, not the good ones. And few fields have had a more positive effect on human well being than organic chemistry.

While I have no objection in talking tangentially about molecules important to people in their everyday lives, this is not what’s going on here.  Rather, the lessons are used to impart the Critical Theory view of hierarchical oppression to students.  I have no doubt that almost any academic subject can be hijacked in this way. But is that how we should be teaching our students? Not only infusing everything with politics, but a particular view of politics?