Moses Brown School is a Quaker school in Providence, Rhode Island, serving students from pre-kindergarten through high school (12th grade). It’s my experience that Quakers are particularly susceptible to Wokeness, perhaps because they are eclectic and dedicated to service: traits that are normally great but can easily be bent toward the interests of Critical Social Justice.

At Moses Brown, this seems to be what has happened. Here’s a tweet from a former teacher who writes about education at Substack:

When a school separates students by race *during the school day* for a book discussion and a student who is half white and half Asian chooses the "white-identifying" group but is made to leave and go to the BIPOC group. 🤷🏻‍♀️

I don't think that is even legal.

I have no opinion about the legality of this, though lawyers might. If true, it’s invidious, but we have to take this with a grain of salt, for it’s hearsay. Sanzi says she’s been told of the incident above “by more than one parent”, though nobody dares to speak out.

What is not at issue, however, is that the school, in having the upper-school students read the antiracist young adult novel The Hate U Give, about a black teenager’s reaction to a police shooting of her boyfriend and her increasing activism, is promoting segregation in learning.

The novel is a popular read for entire schools, and that is fine, but what’s not fine is dividing up the school into two racially distinct groups to discuss the book. As the letter below from school officials shows, they divided up the discussion into two “affinity spaces [using] framing that is appropriate for the BIPOC or White-identifying experience.” (Note one of the signers has the title of “Facilitator of Conversations about White Privilege and Allyship, already a signal of Critical Race Theory at Work.) 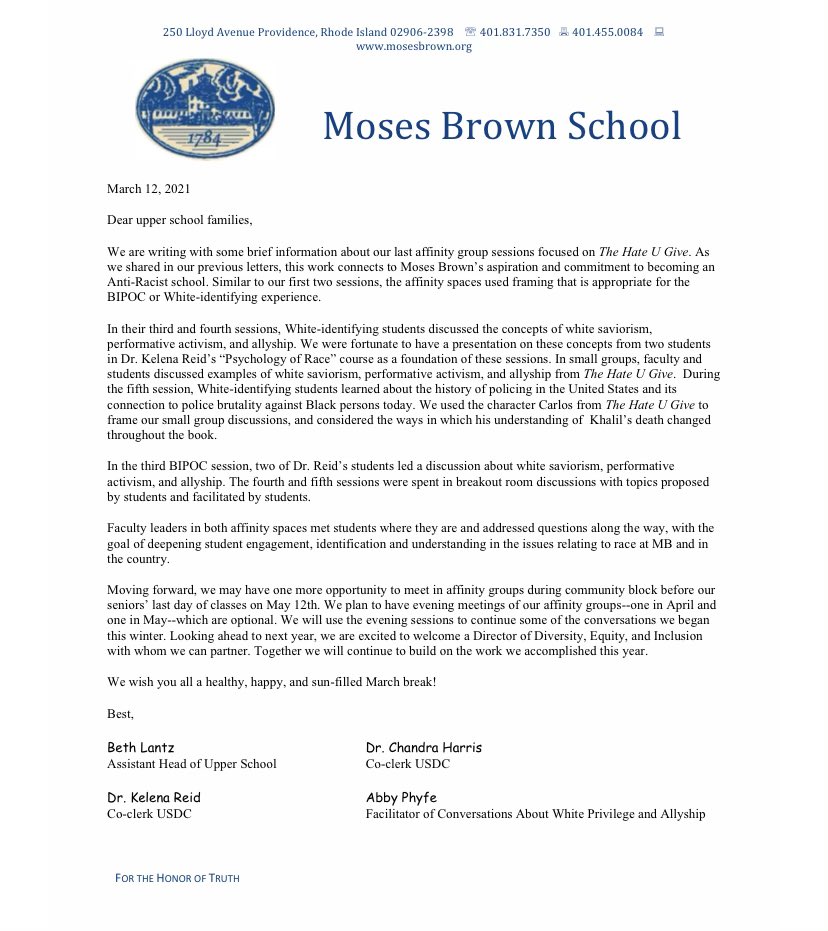 In the next three sessions, white kids discuss the novel from the point of view of “white saviorism, performative activism, and allyship” as well as “learning about the history of policing in the United States and its connection to police brutality against Black students today.”

BIPOC (Black, Indigenous, and People of Color) students, on the other hand, also learn about white saviorism, performative activism and allyship in one session, but then devote the other two sessions to breakout room discussions about topic proposed and facilitated by students.

In other words, although there are certain themes in common to the two “affinity groups”, they are handling the book differently, with no communication between the groups. Worst of all, there seems to be no plan to have white, blacks, and other minorities discuss the book together.

This is not a good way to educate students: forcing them to join others with similar pigmentation (except for the poor half Asian student) and then having race-specific discussions. When do black and white kids get to talk to each other? They don’t! Each “race” has five sessions with members of their group alone (white and BIPOC). And what this does is to simply divide up the school, and the students’ views, by race. It does not foster mutuality, fellow feeling, or the highly-touted but always neglected idea of “inclusion.” The worst way to overcome racism is to keep the races apart and allow each one to develop their ideas in isolation from the others. But of course we must realize that this bizarre form of separation is not intended to end racism. It is, ironically, “performative activism.”

What are euphemistically called “affinity spaces”, a term reeking of inclusion, are what used to be called “segregated spaces.”  Such is the madness that is afflicting our schools.