As I’ve written here before, the University of Chicago has several “foundational principles”. These include the famous Chicago Principles of Free Expression, promoting complete freedom of speech, which have been adopted by over sixty universities. They also include the Kalven Report, which prohibits the University, with a few rare exceptions, of taking official political, moral, or ideological stands. Both of these principles are designed to foster the widest possible discussion of issues and to avoid “chilling speech”, that is, to avoid creating a climate in which people feel intimidated from speaking their minds. The latter point is especially salient in these times of ideological conformity, especially in colleges (and that means, in general, conformity to the Progressive Left).

I recently found the following statement on the University webpage of the Master of Arts Program in Humanities, described as “a rigorous, one-year graduate program that allows students to focus within a specific academic discipline—such as Art History or English—or to explore their interdisciplinary interests.” 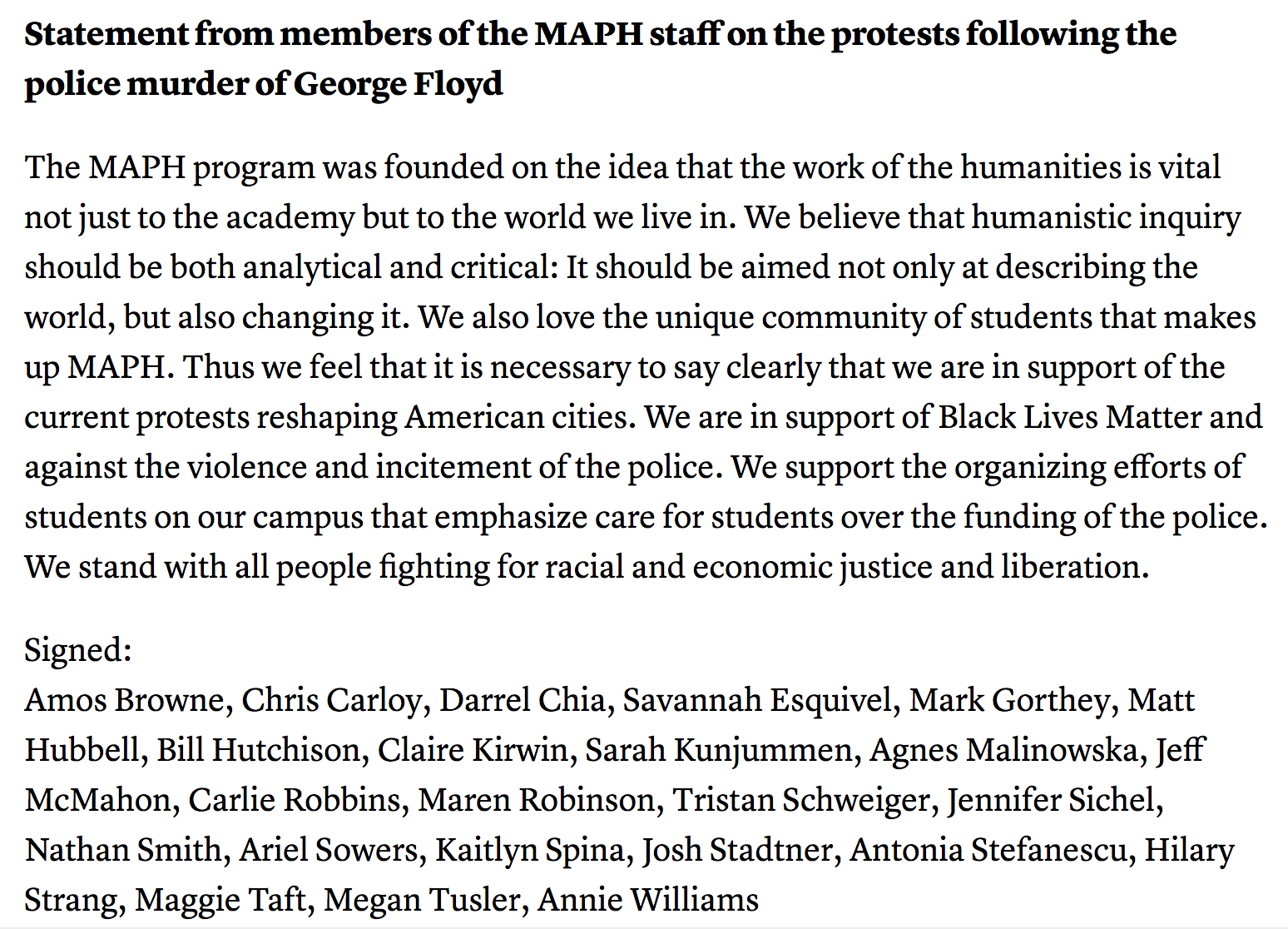 Although it is signed by some faculty, as opposed to the numerous other unsigned statements that appear as official blanket endorsements of ideologies on department or program webpages (e.g., here), it still appears as an official statement by an organization, and is therefore liable to chill speech. I see this as an egregious violation of the Kalven Report.

Note that it not only describes the death of George Floyd as a “police murder”, which is surely a debatable issue rather than a settled matter (can we please wait for the trial and verdict?), but, more important, pushes adherence to a certain point of view as well as calling for action (following the program of Black Lives Matter, defunding the campus police, and supporting current protests). This is a political and ideological statement from an organized unit of the University. It therefore does not belong on an official University webpage. Although I adhere to parts of the statement, even if I adhered to all of it I would still consider it a violation of the University of Chicago’s principles.

As the Kalven Report notes, and I agree, the faculty are welcome to write whatever they want as individuals or groups, but not when appearing to speak for the University or one of its units:

The principles of the Kalven Report apply not only to the University as a whole, but to the departments, schools, centers, and divisions as well, and for exactly the same reasons, i.e., these essential components of the University should not take institutional positions on public issues that are not directly related to the core functioning of the University.  Of course, faculty, students, and staff, either individually or in groups, are free to take positions as individuals or as collections of individuals, but this expression must be distinct from expression advanced by official units of the University. This distinction must be maintained, because the process of assessing complex issues must always allow for the broadest diversity of views to be heard and held, and the diversity of views that lies at the heart of a great university must never be chilled by formal institutional positions on such issues.

Some departments, faculty, and students apparently don’t realize that by pushing their political points of view as statements of departments, committees, and other official units of the University, they are chilling the speech of those who might disagree with them. By all means, write on your own time; write a letter to the Chicago Maroon newspaper; write an op-ed for the Chronicle of Higher Education giving your personal take on politics. But don’t try to make your views into official University statements, thereby inhibiting free discussion.