The other day, depressed with the number of people I saw expressing sheer joy at the death of Rush Limbaugh, I put up a Facebook post:

In response, people proceeded to inform me, as if I didn’t know, what Limbaugh’s odious political and personal opinions really were, with some adding me that it was really okay to celebrate. (Nobody unfriended me.) After all, his existence was a net minus for the world’s welfare—something I’m prepared to believe—so why not gambol with glee when he died? (Let me note that he died of lung cancer, and it was probably a pretty horrible way to go.)

And, as Frank Bruni notes in his New York Times op-ed below (expressing a view similar to  mine), the celebrations were not only widespread, but pretty mean-spirited:

“BIGOT, MISOGYNIST, HOMOPHOBE, CRANK: RUSH LIMBAUGH DEAD.” Those were the words, capitalized and adrenalized, that HuffPost splashed across its home page. Several other left-leaning sites took the same tack and tone.

Of course, they were positively restrained in comparison with Twitter, which is basically talk radio’s less windy bastard child. “Rest in piss” had currency there. The F word, followed immediately by Limbaugh’s name, was taken out for a spin. There was speculation that Limbaugh had gone to a very hot place reputed to have nine circles and a red, horned ruler. There was wishing that he would rot there. One tweet said that Limbaugh “brought a lot of people a lot of joy by dying.” It was liked by more than 35,000 of the morbidly contented. I don’t begrudge them their relief that he’s no longer ranting. But is that really what they want to lavish a cute little heart symbol on?

Not for me.  While I don’t mourn the absence of Limbaugh from the scene, celebrating it just didn’t feel right. I couldn’t join the chorus of glee, and yet I didn’t understand why. I didn’t feel that I was superior to those who were celebrating (yes, it was mean-spirited, but I can be, too), but something in me baulked at expressing the verbal equivalent of heart symbols.

Part of it was that Limbaugh’s wife was on the news, clearly distraught, and she loved him, as other members of his family must have. So some people are more heartbroken than we are gleeful. And I’m a conscientious objector, which I think has made me wary of celebrating anybody’s death, even an enemy’s.

But most of all, I suppose, I realize how much every human values their own lives. Evolution has instilled strong instincts for self-preservation in us, and few can face a terminal diagnosis with equanimity. Limbaugh himself must have gone through unspeakable mental and physical torments after his diagnosis and before his death. I wouldn’t wish that on anybody, and it’s hard for me to look at that and laugh.

And yet, like Bruni, I think it erodes one’s character to engage in that kind of hate, and I think it’s eroded both Democrats and Republicans over the past four years to engage in the kind of demonization that led to the celebration of Limbaugh’s death. What doesn’t erode one’s character is a measured yet highly negative take on Limbaugh’s legacy, which both Bruni and Andrew Sullivan (below; click on screenshot) offer. 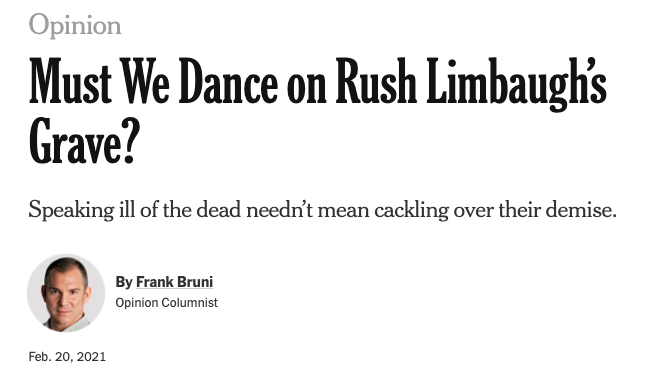 Bruni extols the New York Times‘s own obituary of Limbaugh as the way it should be done:

He earned it. If you’re going to fling your opinions at the world, you must be braced for the world to fling its reaction back at you. Those are the terms of the contract.

And it would be journalistic malpractice and morally wrong to publish obituaries about Limbaugh that merely noted his role in the rise of talk radio and his adoration by millions of listeners. Those appraisals were obliged, for the sake of history and accuracy, to note and be reasonably blunt about how he used his format, what listeners were thrilling to and what impact it had on the country’s political culture.

The Times’s obituary did precisely that. I don’t always agree with the approach and decisions of the news organization that employs me and have never felt any pressure to play cheerleader for it, but I think it handled Limbaugh’s death expertly.

The headline: “Rush Limbaugh Dies at 70; Turned Talk Radio Into a Right-Wing Attack Machine.” That nails his significance and signals his destructiveness without hurling slurs. Below those words, in a subhead, came these: “With a following of 15 million and a divisive style of mockery, grievance and denigrating language, he was a force in reshaping American conservatism.” Again, no sugarcoating Limbaugh’s behavior, no hedging about his tactics, but also no taunting, no seething, no celebrating. The paragraphs that followed that subhead also followed suit.

And I suppose Bruni helped me get a handle on my own feelings when he said this:

They certainly didn’t pay homage to him. But the nastier stuff that I saw elsewhere did, in its way — by accidentally reifying his aspersions against liberals as merciless jurists and by inadvertently validating his own style. If imitation is the sincerest form of flattery, Limbaugh was just flattered to a fare thee well. He got posthumous company in the gutter, and I’m hard pressed to identify anyone who benefits from that.

I’m not saying that if we all just talked prettier, we’d find common ground, or that ugly language about bigots is nearly the problem that their bigotry is. I’m not saying that we owe Limbaugh and his listeners a gentle touch and, without it, are doing them some unwarranted disservice.

But our roughness certainly isn’t going to lead anyone to the light, and it may well encourage its targets to hunker down in their resentment, double down on their rage and stray less frequently onto terrain where they might mingle with people who hold at least slightly divergent views.

Our crudeness only perpetuates a kind of discourse that tracks too closely with Twitter: all spleen, no soul. Paired with an information ecosystem in which people on different places of the political spectrum often curate — and ascribe to — wholly different facts, it doesn’t leave us the room for reasoned and reasonable debate on which a healthy democracy thrives.

Bruni concludes, as do I, that one shouldn’t concentrate on only the good stuff done by the deceased, or neglect their perfidy. Not at all! But there’s no need to shout with joy, either. The best way, in my view, is a measured analysis of someone’s life.

Joyfulness accomplishes absolutely nothing that I can see.  Many of us admire Barack Obama and his measured take on issues, regardless of what you think of his acts as President. Can you imagine a news person asking Obama, “Well, what’s your reaction to the death of Rush Limbaugh?” Can you even conceive of Obama rubbing his hands together and saying, “It was great! I’m glad the nasty bastard’s dead!”

In the end, I see celebration of a death as uncivil. Even if the most vicious criminal, a serial killer, was executed by lethal injection, I can’t imagine why one would want to celebrate that. After all, the alternative is life in prison, perhaps a worse form of existence. And you can’t argue that Rush Limbaugh ever killed anyone.

So that’s my take, and many will disagree, as they did on Facebook. But please don’t lecture me in the comments about what an s.o.b. Limbaugh was. I already know that! This post is, and I hope the comments will be, about the propriety or impropriety of celebrating someone’s death. (By the way, I did reread Hitchens’s obituary on the death of Jerry Falwell, and saw that with the exception of one sentence, there was no celebration. Rather, there was an acrid critique of Falwell’s views and of how religion turns the odious into the admired. The celebratory sentence: “It’s a shame that there is no hell for Falwell to go to, and it’s extraordinary that not even such a scandalous career is enough to shake our dumb addiction to the “faith-based.”)

I thought Andrew Sulivan’s take on Limbaugh and his legacy, a small part of his latest Friday post, was pretty good, and I present it in full below (click on screenshot if you have a subscription):

I don’t drive, so I only listened to Rush Limbaugh very sporadically over the last thirty years. But every time, I was struck by his sheer performative genius. To broadcast live for three hours every day is one thing; to come to almost every show with sharp, detailed research, a near-encyclopedic grasp of current events, and a battery of jokes, is quite another. As with Roger Ailes, it’s stupid to deny Limbaugh’s media genius. He created an entire world for his ditto heads to live and breathe in; he mastered an often hilarious gift for self-mockery disguised as self-flattery; and he had an unerring ability to expose and prick the self-righteous humbug of pious lefties. I will confess to laughing out loud many times at his blasphemy.

And in the context of the once-smothering liberal monopoly of mass media of the 1980s, this insurrection was ballsy and overdue. But like the Gingrich phase of conservatism in the 1990s, which also broke a long-held liberal monopoly on the House of Representatives, it curdled over time. The tribal mockery was funny when allied with a coherent and counter-intuitive defense of conservative ideas and arguments. But as the years went by, and as conservatism remained calcified in a Reaganite zombie phase, the mockery began to replace the ideas completely, faute de mieux. What was originally an argument became merely an attitude, like the grin that slowly became all that was left of the Cheshire Cat. And with the emergence of a figure like Trump, who was a walking assault on conservative ideas and sensibility, the attitude became detached from any principle but tribalism, and based itself in exactly the kind of personal cultism Limbaugh innovated for himself.

He was as personally kind and generous, we are told, as he was publicly shameless. And it’s important to see the man as a complicated whole. But what he did to conservatism was ultimately to facilitate its demise as a functional governing philosophy; and what he did to the country was intensify its cynicism and tribalism. Few did so much to popularize conservative values; and few did more, in the end, to discredit them.