I’ve posted before on the conundrum that Woke Ideology gets into when a group is considered “of color” because of either its pigmentation or historical oppression, but then must face the palpable fact that some “groups of color” can be remarkably successful. Nigerian immigrants, East Asians, and Indians, for example, are high achievers in the U.S., at least if you judge by the American Standards of Success—income and academic achievement.

Here’s a plot from six years ago showing income data provided by the U.S. Census. I’ve put an arrow by the oppressor group, whites, yet every group above it is considered to comprise “people of color”, with Indian-Americans making about 1.7 times as much per household than white Americans. 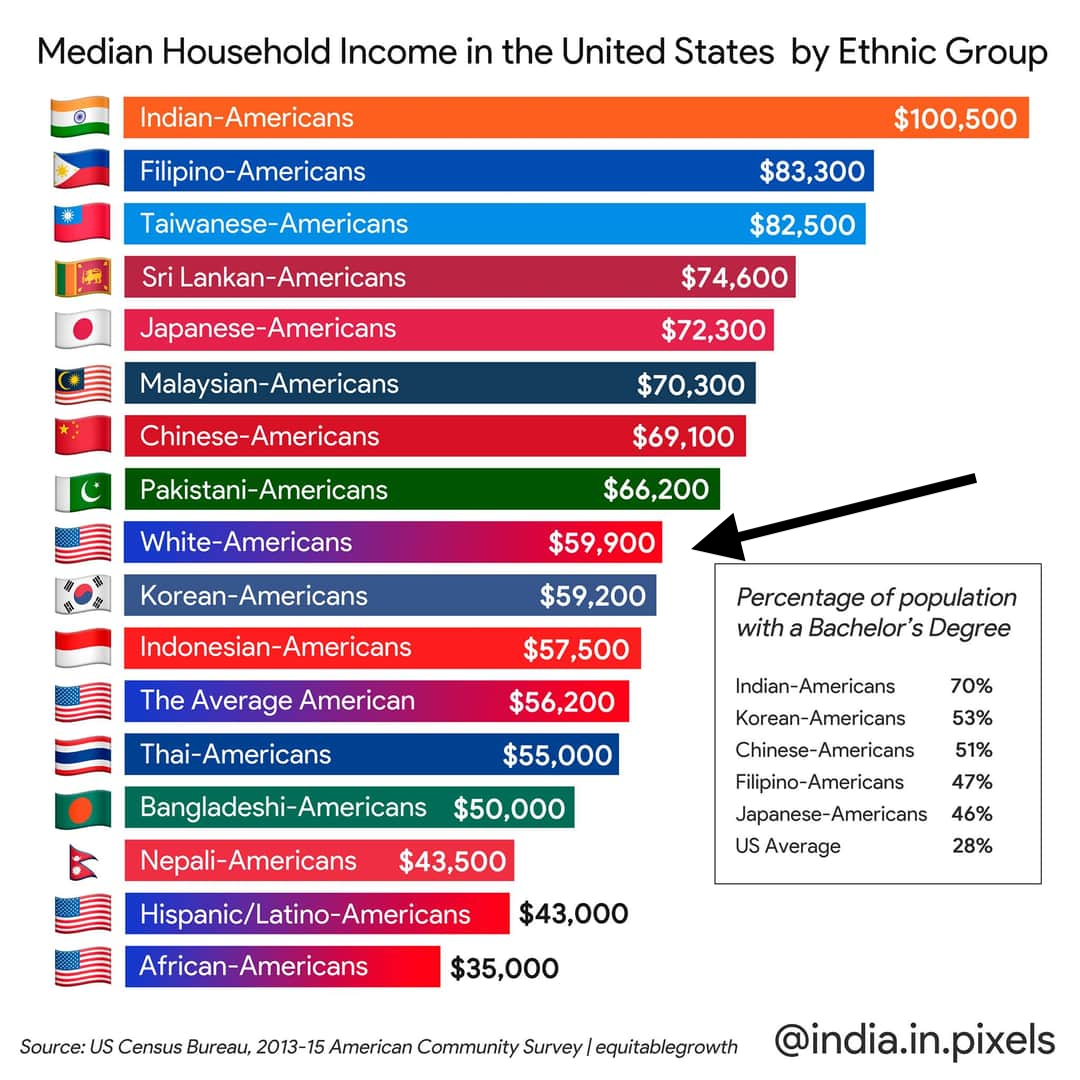 The same holds for other measures of achievement, including standardized test scores and academic degrees. Here’s Wikipedia‘s chart from its article on “Racial Achievement Gap in the United States“. Once again, Asians are on top by a substantial margin, which is why colleges like Harvard have to lower the rankings of Asian applicants to keep them from numerically dominating the student population.

In light of these differences, whose causes are complex, it’s no surprise that the Woke get confused when it comes to Asians. While they’re generally seen as “people of color” because of a past history of oppression (and occasional bigotry now, like Asians getting denigrated for the “Kung Flu”), whatever oppression occurred in the past or is occurring now hasn’t materially affected the academic or pecuniary success of Asians. In every respect you can think of, they are “privileged.”

The dilemma was highlighted last November when, according to the libertarian site Reason.com (and verified elsewhere), a school district in Washington State decided to lump whites with Asians when judging academic achievement, implicitly counting Asians as “whites” by opposing their achievements with those of “students of color.” The report, which you can see by checking the links, includes this (all emphases mine):

In their latest equity report, administrators at North Thurston Public Schools—which oversees some 16,000 students—lumped Asians in with whites and measured their academic achievements against “students of color,” a category that includes “Black, Latinx, Native American, Pacific Islander, and Multi-Racial Students” who have experienced “persistent opportunity gaps.”

Most indicators in the report show that the achievement gap between white/Asian students and “students of color” is fairly narrow and improving over time. It would probably be even narrower if Asian students were categorized as “students of color.” In fact, some indicators might have even shown white students lagging behind that catch-all minority group. Perhaps Asians were included with whites in order to avoid such an outcome. (The superintendent did not respond to a request for comment.)

What the equity report really highlights is the absurdities that result from overreliance on semi-arbitrary race-based categories. The report also measured “students of poverty”—those who qualify for free or reduced-cost lunches—against non-poverty students, and unsurprisingly found a much more significant achievement gap. Students of poverty perform 28 percent worse on math tests, for instance. That socioeconomic category captures something real and meaningful in a way that the gerrymandered race category does not.

I can see no reason for lumping Asian-Americans with whites as “whites” except to increase the difference between the “white” and the “people of color” groups. Why they would want to do that, though? I will leave to your imagination.

But now, if you go to the first link—to the school district’s “equity report”—you won’t find the previously lumped data. Instead, you see the self-flagellation below, for when the school considered Asians as “titular whites,” they got into big trouble. I’m not sure who raised the alarum about this, but it resulted in this fulsome apology from the school district:

One of our district’s Strategic Plan goals is Continuous Growth – All Students, All Subjects. One of the outcomes we are working towards in this goal is to have an “increased growth rate of underperforming groups eliminating achievement and opportunity gaps.”

For this reason, in one of our previous online documents from 2019, titled “Monitoring Student Growth,” we evaluated the achievement data by “Students of Color” and “Students of Poverty.” In the document we grouped White and Asian students together and Students of Color in another category. While our intent was never to ignore Asian students as “students of color” or ignore any systemic disadvantages they too have faced, we realize our category choices caused pain and had racist implications.

After the report resurfaced in social media, we received an overwhelming public response. We appreciated the thoughtful and honest feedback we received from students, parents and community members, and commit to change how we look at achievement data in the future. We apologize for the negative impact and hurt our actions caused and have since removed the dated monitoring report from our website. The document from 2019 is the only place where we grouped White and Asian students together. All of our Policy Governance reports to the School Board, including student achievement and growth data, can be seen here.

Note the claim that there was “negative impact” and “hurt” associated with the report. Who would complain about harm? I’m not sure that Asians would consider themselves hurt by this action, except for those who insist on seeing themselves as victims. I suspect, then, that those who complained were non-Asian people of color, who want Asians to be grouped with them as the object of white oppression. But I’m only guessing.

The solution to this issue seems to rest on an honest categorization of the variables most associated with achievement. While “race” is one of them, it appears that class (“poverty”) is more important, at least at Thurston. I’m starting to think that my colleague Brian Leiter is right in arguing that, in these matters, race is way overemphasized to the neglect of class. They are correlated, of course, but there are the notable exceptions mentioned above.

What such a conclusion points to is that to achieve true equality, we have to level the playing field with respect to class more than race. That, of course, will still result in disproportionate help given to people of color, but so what? We just want every American to have the same opportunities.  (Of course, given the system of inherited wealth, that will be a tough row to hoe.). All I know is that to solve the problem of unequal opportunity, we first need to find out what causes it. And it can’t solely be systemic racism against “people of color.” If that’s your indictment, you must then to do what the Thurston school district did: count Asians as “whites”.

70 thoughts on “School district gets in trouble: decides to count Asians as “whites” to highlight a bigger academic deficit between whites and people of color”