Yesterday I wrote the first part of my analysis of the following “op-ed” that was published in Cell. The point of the paper is clear from its title. Click on the screenshot to read it. 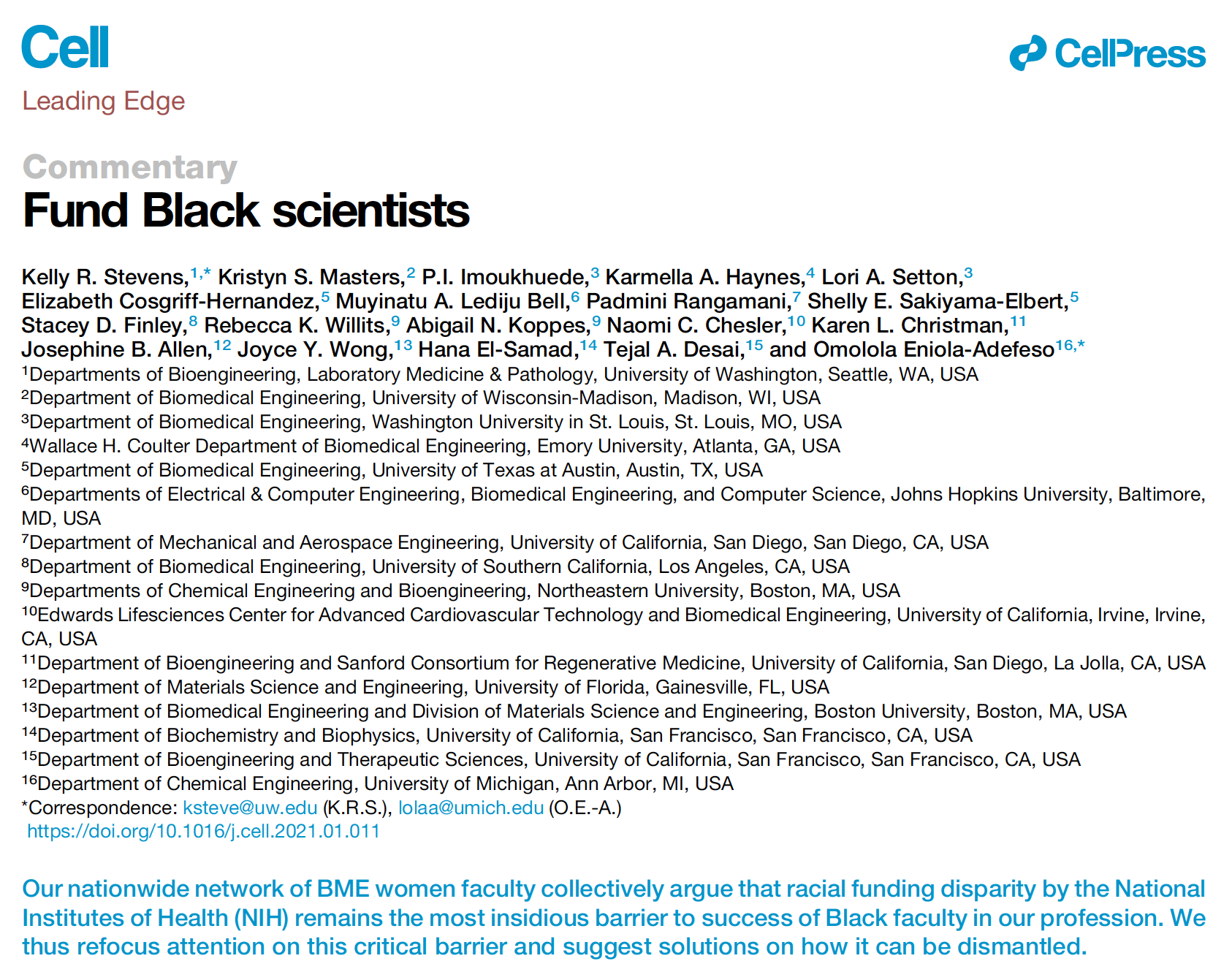 Yesterday I addressed the disparity in funding rates between black and white investigators submitting grants to the National Institutes of Health (NIH)—a disparity that is quite substantial (black “principal investigators”, or “PIs”, are funded at only 55% of the rate of white ones). The article above both implicitly and explicitly attributes this disparity to racism: structural racism in science as a whole, racism in the National Institutes of Health, and racism of those people who review and score the grants and decide which ones deserve funding.

Yet the only relevant study addressing the issue of grant evaluation shows no disparity between black and white investigators (or male and female investigators) in ratings given grants. The authors of the study above ignored that finding, though they surely knew about it.  They also ignored a study showing a likely reason for the disparity that has nothing to do with racism: black investigators tend to submit proposals in areas of research that are generally not well funded. (That’s often applied research.) A large part of the disparity is thus due to a disparity of research interests, not to racism.

Further, an even larger amount of the disparity is due to the past record of investigators: papers published, quality of work, types of funding, and so on. While background differences may reflect past racism, this is not an issue of discrimination by the NIH, but a “pipeline problem”: a lack of opportunity for minorities early in life, depriving their members of the ability to build good curricula vitae later in life.

As I also noted, my view has always been to favor affirmative action in hiring, both of students and professors, as well as in other professions. But I think that form of preference has to stop at some point in one’s career, and to me a logical place for scientists is when they begin their first academic job. At that point they’ve been found to be qualified to enter the “science club”, and from then on I think that fairness demands that one see the playing field as level and that preferential treatment should stop.  That does not mean that minority faculty don’t deserve mentorship or consideration of special problems they may have, only that they should be given the respect of being treated identically to everyone else, regardless of ethnicity, gender, or race.

Stevens et al., however, disagree. They argue that the palpable racism of the NIH and its reviewers—a racism for which there’s no evidence—mandate profound changes in how the grants of African-Americans are reviewed. (They don’t mention other groups like Hispanics in their piece.) These grants, they argue, should be given preferential treatment. And if they’re not, the authors claim that this is itself racism.

Here’s an example of one of their recommendations and their response to how it’s addressed. The authors are requesting that the numerical scores given to NIH grants by reviewers, which are the overwhelming criterion for whether a grant is funded, take into account the racial diversity of the group of investigators applying. (Nearly all my own grants, by the way, had only myself as the researchers, with unnamed graduate and undergraduate students put into the budget since they hadn’t been hired.)

We ask: why is “diversity of the investigator team” not a scorable criterion in NIH grant review and priority for funding?
Be careful with responding, because one answer is racist and the other is not.

No, the “wrong” answer isn’t automatically racist because you can argue that diversity of researchers is not a good criterion for grant quality. It is also arguable whether the mission of the NIH should include social engineering as well as promoting good science, and whether equity should have already been engineered before people apply for grants.

Here are some of the changes Stevens et al. wish to make in the NIH system of awarding grants:

This seems unfair to me, though of course all forms of affirmative action can seem “unfair” to those who are passed over in favor of minorities. What I mean is that preferential treatment of investigators should stop when they are hired as faculty in the first place. Grants should be evaluated completely race-free. (One way to do this, which I mention below, is to eliminate all clues to ethnicity from grant proposals, which in principle should ensure fairness. I favor attempts to do this.)

You can argue that my point of view is wrong, but it’s the one I take when judging fairness. Giving extra attention to grants from African-Americans, including mandatory discussion of there’s a black PI but not a white one, is unfair. Likewise with the “mandatory reevaluation” of grants of black PIs but not white ones. Anonymity of proposals would also make that completely superfluous—unless you don’t want a “I don’t see color” system but an “I do see color and want to favor it” system. Stevens et al. seem to favor the latter option.

I do agree that we need more minority reviewers and panelists to ensure that the credibility of our commitment to equality of opportunity be maintained, although my experience is that race and gender are not very useful ways of bringing different views of “quality” to the table. Rather, minority reviewers show our commitment to equal opportunity without promulgating unfairness, and also help ensure that if any racism creeps into the discussions (I have to admit I haven’t seen any in my many years of NIH funding), it will be more easily called out.

In the end, Stevens et al. provide a list of things that all scientists involved in the reviewing system should do:

The last two deserve consideration, though in my entire scientific career I have never heard anything remotely close to a racist or sexist statement uttered on a grant review or in a panel. The panel administrators, who are scientists, are chosen for their fairness and competence, and would shut down anything like that in a second. And remember, I entered the system in the early 1980s.

Including minority faulty in collaborations (#6) is fine, as it’s a form of affirmative action that doesn’t seem unfair, since you get to choose your collaborator and can collaborate with whomever you want. But I would say “Consider including black faculty. . .” as it should not be mandatory. In fact, there are no black evolutionary biologists who work on speciation in Drosophila, so this was never an option for me.

The first three actions represent preferential treatment of grants based on race, and may be illegal. In fact, “score grants of Black faculty well” is invidious because it means “give good scores to proposals from all Black investigators, regardless of the proposal’s quality” rather than “treat these proposals fairly”. At any rate, I think grants should be treated equally, and even reviewed with the names taken off of them if that is possible (sometimes it’s easy to guess whose grant you’re reviewing). If grants were reviewed blindly at both ends, any accusations of racism would be moot.

As for learning what racism is, and reading about “systemic racism and antiracism” (#4), yes, I’ve done that, and surely all academics now should understand these terms. But I suspect Stevens et al, based on the rest of their op-ed, have a specific definition of these terms, and one that corresponds to their meaning in Critical Race Theory. And to that I object, for that’s a form of indoctrination into an ideology. All we need to know about racism and grant reviewing is this:  investigators should be judged by the content of their proposals, not by the color of their skin.