As I’ve mentioned in passing, I’ve had two coronavirus shots; these used the Pfizer vaccine. The university hospital has been vaccinating a gazillion people, starting with healthcare workers on the front line, hospital employees, local oldsters (like me) and then residents of the South Side, mostly black, as well as healthcare workers who aren’t affiliated with the hospital but work on the South Side. It was heartening to go to the Covid clinic, an efficient and dedicated facility in the hospital, and wait in line with a cross-section of Chicago, including healthcare workers in their scrubs, all of us “in it together.” I have nothing but praise for that organization and its efficiency, and everyone was uber-friendly. I even got a “congratulations” after my second shot.

And as I stood in line, I realized what a fantastic thing these vaccines are, and, indeed, what all vaccines are.  If our immune system had no memory, if scientists hadn’t figured out that you could stave off disease by tweaking that memory, and if they hadn’t figured out how to do it without causing the disease, humanity would have been driven down over and over again.

The Pfizer vaccine is even more marvelous: a vaccine made by injecting into your arm a liquid solution of RNA “code” for the virus’s spike protein, with that code encapsulated in little fat bubbles. Once in your arm, the specially designed code makes its way to your cells, which then use the code to make many copies of the virus’s spike protein. Those free-floating copies are themselves harmless, but are the parts of the virus that adhere to cells when you get Covid-19. The immune system then recognizes the spike proteins as foreign, goes to work destroying them, and then the memory of those proteins is stored in our immune system (this is the way that all vaccines work). When you get a second shot, the immune system recognizes the spike proteins that it’s seen before, and mounts a huge defense against them, creating not only greater memory but often producing some side effects for the second jab. When you’ve mounted two defenses, your immune system is ready to go when it sees the spike protein on a virus that infects you.

In late December I wrote a post about how scientists had tweaked the spike protein’s RNA code to get it into our cells intact and make it produce many copies of the protein. That tweaking itself rested on years of molecular-genetic work done without the goal of making a vaccine. It’s a testament to the power of pure research and human curiosity.

All in all, I consider the mRNA vaccines, like the Pfizer and Moderna ones, as “miracles”—except I don’t like the word because it smacks of religion. But they do show what our evolved neurons are capable of doing when faced with a medical problem. I don’t know a secular word for “miracle”, but if there is one then it should be used with these vaccines. And remember, jabs went into arms less than a year after the virus first began its depredations in China. Further, the vaccine was designed within just a few days after the genome of the virus was decoded, which itself took less than a week.

But people want to know what the shots were like.  The first one was a piece of cake: it was a simple jab (they manage to get six doses out of a vial at the hospital, increasing the number of jabs by 20%), and I didn’t even have a sore arm. The only side effect was a very slight soreness at the injection site, but a soreness that could be detected only by pressing on the site.

It was 18 days between jab 1 and jab 2, though the usual period is 21 days. I took the shorter period because it was within CDC and Pfizer recommendations, and I was eager to become immune. I’m not sure how they know that 13-21 days is the right interval, and I don’t think they really did a lot of tests about that.

The second jab went into my arm on Monday. I was informed in great detail, and given an instruction sheet, that this jab was likely to cause more side effects, including chills, fever, muscle aches, and even vomiting. I was prepared for that: it’s better to suffer for a day or so than to get infected! I felt fine throughout Monday, but my arm was a little bit more sore than after the first jab. On Tuesday morning I also felt pretty good, and, because they said symptoms may begin within 12-24 hours, I thought I was home free.

That was not to be. At about noon yesterday (28 hours after my second jab), I begin feeling muscle aches, overall tiredness, and a general malaise, as if I were getting the flu. I recognized this as side effects and went home, dosing myself with Tylenol. My temperature, which is normally low (about 97.3° F, went up a bit, to 99.5°F). I did not lose either my appetite or sense of taste or smell, and I had a decent dinner but abjured the vino. I went to bed still feeling out of it.

But I woke up this morning feeling right as rain. As the instructions said, the side effects pass within 48 hours.  One has to wait two weeks, I understand, to acquire the vaunted 95% immunity that comes with this vaccine. From this my advice would be “when you get your injection, schedule it for late in the afternoon, go home, and then be prepared to not go to work the next day.” A Friday afternoon would be ideal for that second shot.

I asked the nurse who gave me the second jab if there was any correlation between the severity of one’s side effects and the effectiveness of the immunization. One would think that a vigorous immune response to the second dose, indicating that your immune response was quite active against the protein, would mean that you’d be better protected against the real virus. In other words, the worse the side effects, the better off you are. She said there was no correlation, as did the instruction sheet I got. I still am a bit dubious, but if there is a correlation, that I’m good to go against the virus.

Of course I urge everyone to get their jab. I asked a staff member on campus with whom I’m friends if she got the jab. I was surprised when she said “no.” When I asked why, she said because “people had died from the vaccine.” She was afraid of it, which I think is a fairly common feeling. But I looked up the deaths associated with the Pfizer vaccine, and, as we know, it’s not risky. There were six deaths during the phase 3 trials, but four of those were in the control group. Two died in the vaccine (experimental) group, one from arteriosclerosis and the other from a heart attack. Those deaths were probably the results not of the vaccine, but of underlying conditions. Of course some people will die after being vaccinated: as the control group shows, that will happen in any large group of people! On balance, though, all the experts say it’s better for your own welfare to get vaccinated than to risk Covid-19. And it’s better for society as well, since the more people who get vaccinated, the quicker we’ll attain herd immunity.

I went back to my friend and told her the statistics, but she was unmoved, and clearly didn’t want to discuss the point. Although I was concerned with her health, I realized that there was no point in arguing, as vaccination avoidance is almost a form of religion, and certainly a type of faith. I won’t bring up the subject again.

I’m sure all readers here are eager to get their shots, and it’s frustrating to watch while others get them but you can’t get an appointment. Biden and his administration are working hard on the issue. But we should be cognizant of the vaccine shortages in other countries, which are far more severe than in America or Europe. The news last night reported that America will have five times the number of doses necessary to vaccinate the entire population, and Canada six times. Couldn’t the excess be used in places like Latin America, where the Covid rate is high but vaccines rare?  I know that Bill Gates and others are donating lots of dosh to buy vaccines for poor countries, but we will need about 18 billion dollars to do that job. This is not a U.S. or European issue, but a world issue, and with the vaccine we should be far more concerned about other countries than we usually are. Even from a selfish point of view, if you don’t go after Covid everywhere, the whole world remains in danger.

I didn’t take a “vaccine selfie”; here’s the best I can do: 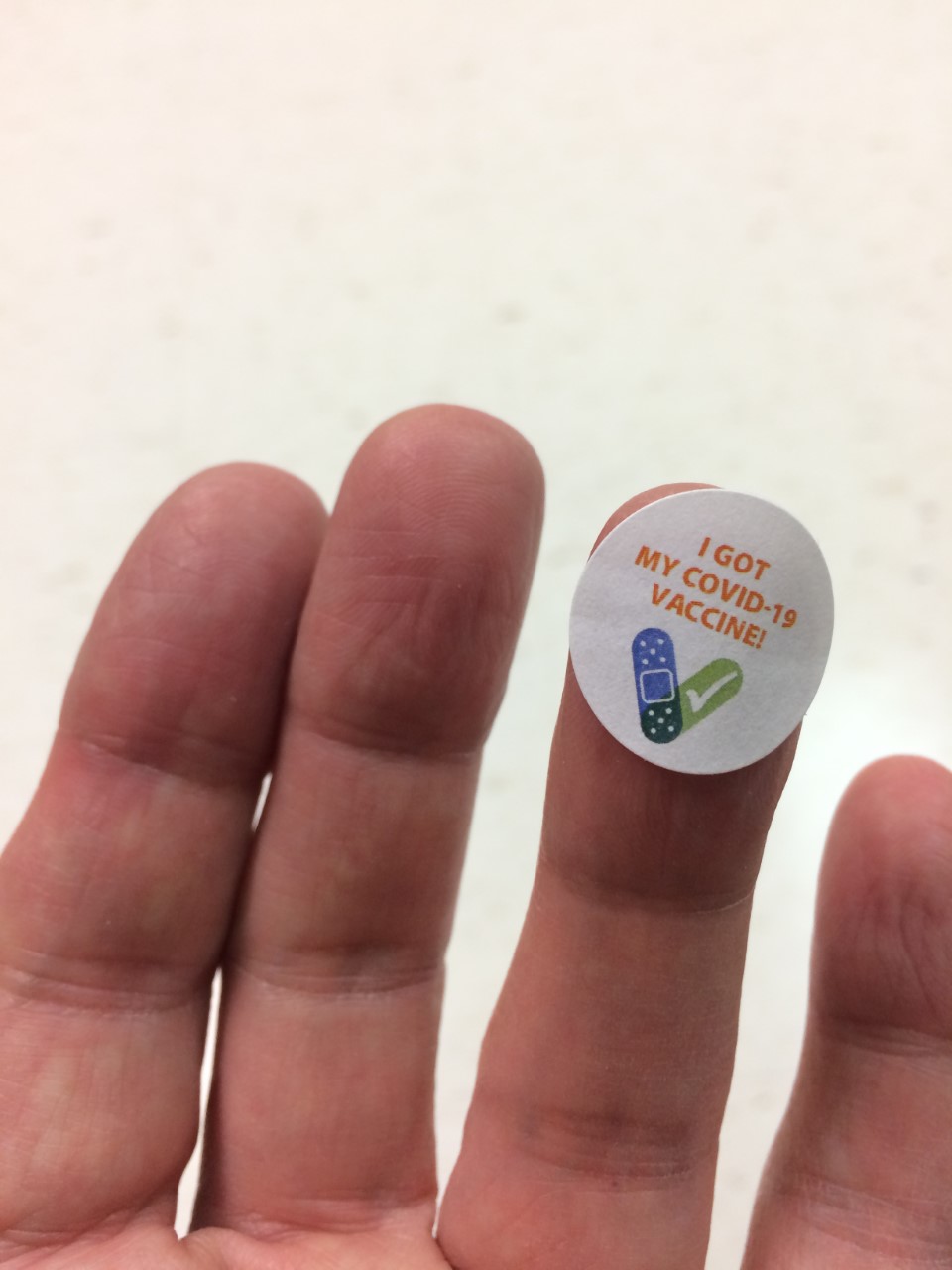