It’s often assumed that medical students take the Hippocratic Oath when they graduate or during the “white coat ceremony“—when they get their Official Doctor Coats at orientation. In fact, there’s a report from the Association of American Medical Colleges (AAMC) that most medical students never take that famous oath, and many classes write their own. Although there are still some “standard” oaths, the AAMC notes this:

. . . it was only around 20 years ago that schools began to allow students to craft their own promises.

Nancy Angoff, MD, remembers the decision to discard Yale’s long-standing oath back in 2000. “Some students and I didn’t care for the language,” says Angoff, associate dean for student affairs. “It seemed very impersonal, cold, and too pat.” At first, they considered reverting to the Hippocratic Oath.

“We debated it,” recalls Angoff. “The students didn’t want to promise things they couldn’t deliver on” that the ancient oath included, so they opted to write their own pledge.

Now Yale is among the 17% of surveyed schools that have an annual process for writing, revising, or selecting an oath. At Yale, the oath is written during a pregraduation course, explains Angoff. Each year, she says, “the students end up with a really personal and beautiful oath.”

You can see why they’ve ditched the original Hippocratic Oath if you read it here. There are parts that are really outmoded, such as this bit, which rules out assisted suicide and abortion:

Now I’m not sure why the students write oaths rather than the faculty, for the faculty surely have a better idea of what good physicianship is all about. And of course the students, who are quite young, can go hog wild, as they apparently did at Pitt. And you know already what they did—and what’s probably happening all over the U.S. They pledged themselves as doctors to engage in social-justice activism.

From PittWire, a publication of the University of Pittsburgh, we have a report of one new oath  (click on screenshot to read): 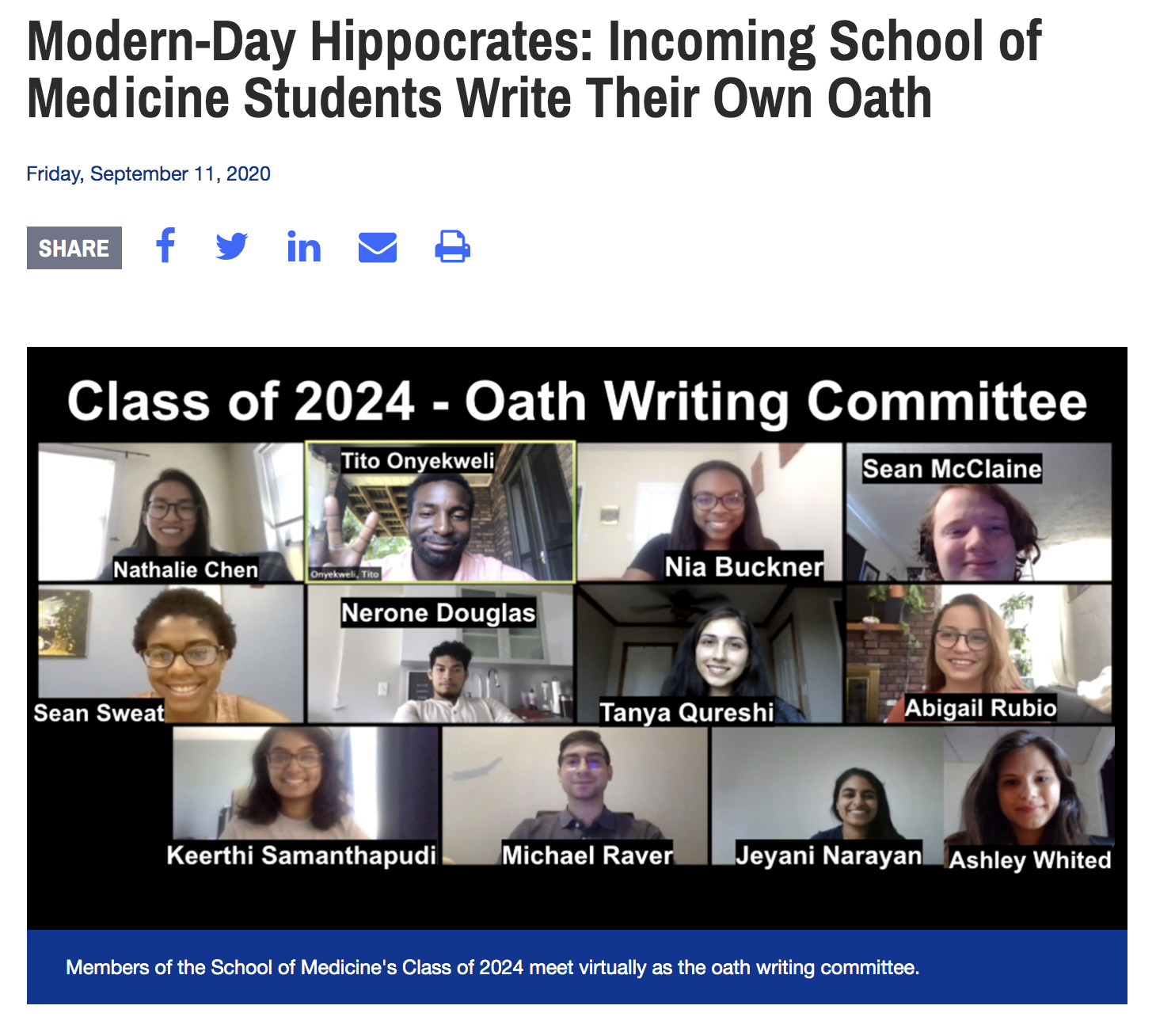 There was a committee to write an oath (always a bad idea), and they produced an oath that was sent to me by reader Ginger K., who commented, “Some of this is quite reasonable, such as the commitment to research and mentoring, collegiality, and personal health. But the woke vocabulary dilutes the good stuff.” Indeed.  The titer of real physicianship is quite low here.

Read the oath for yourself. Right off the bat I was distressed by the ubiquitous ritual invocation of George Floyd, who has nothing to do with medical school or prospective doctors (The Floyd Invocation also initiates “antiracism” statements on some of the University of Chicago’s departmental websites that violate our University principles): 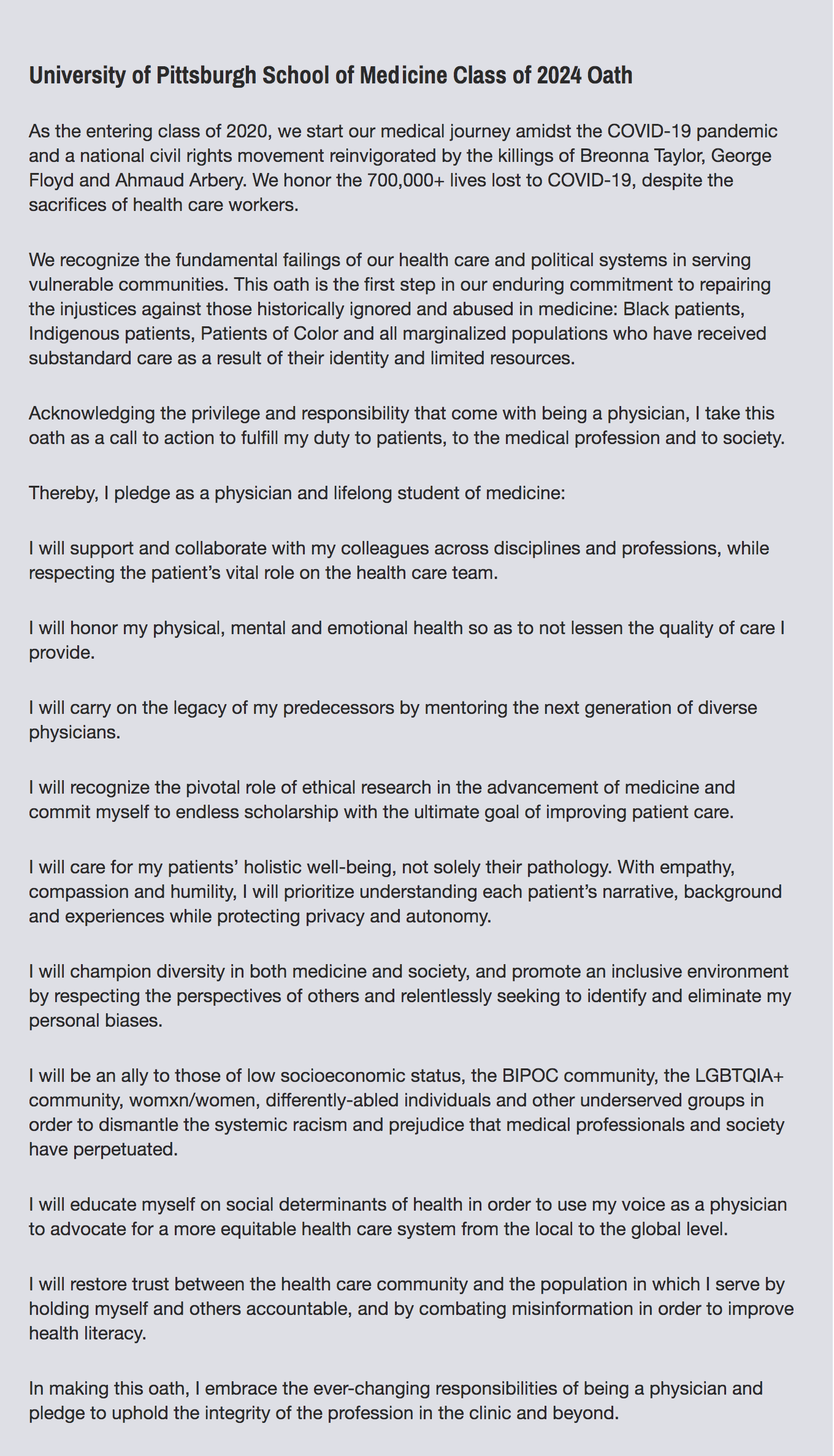 One gets the impression from this statement that medicine is more a social justice mission—fixing racial inequities, fostering allyship and so on—than a mission to bring health and save lives. There’s more about social justice here, including the au courant “self care”, than there is about caring for patients per se, or practicing ethical behavior towards all patients. (And where is the confidentiality clause that was in the Hippocratic oath?)

I’m not going to make too much of this, as students probably enjoy producing their own oaths. But in the end this seems to be an act of virtue signaling, for most of the physicians will be engaged in the quotidian duties of simply helping the afflicted rather than fixing racial inequality.

I do admire those who sacrifice a comfortable existence to help the oppressed and poor, but this is an individual choice, not something to be decreed with a pledge recited by everyone.  For surely not all students agree with this oath—just like not all professors at the University of Chicago agree with their departments’ “anti-racism” statements.

Take this as a sign of the times, and of the racialization of everything. For some students it may be a genuine pledge, but for many of the others it’s performative wokeness, something to be forgotten as soon as they pass their boards.

17 thoughts on “A woke Hippocratic Oath”