Lauren Boebert is a political newcomer, an incoming Congresswoman representing the geographically large and conservative Third District of Colorado. She ran on what was largely a pro-gun platform, and she owned a pro-gun restaurant called “Shooters” in, of all places, Rifle, Colorado, where she encouraged her customers to “open carry.” (For you non-Yanks, that means you can tote your gun or rifle out in plain sight.) The waitresses all open carry as well.

Boebert is a hyper-conservative who herself has open-carried for eight years. She’s also sympathetic to QAnon. As a New York Times article reported:

Appearing on a radio program last month, she said of QAnon: “I hope that this is real because it only means America is getting stronger and better, and people are returning to conservative values, and that’s what I am for.”

“If this is real,” she added, “then it could be really great for our country.”

If you know what QAnon is, you’ll realize what a loon she is.

So far she looks to be amusing, though possibly dangerous. She’s insisted that, for protection, she’s going to carry her Glock into the Capitol and into the House chamber. That’s apparently legal for concealed carry, as the news report below notes. Twenty-one Congressional Democrats have asked Pelosi to get guns banned from the Capitol, but even more of Boebert’s fellow Republicans have defended her “right” to carry guns. Such is America.

All in all, Boebert looks to be a cross between Wayne LaPierre and Sarah Palin.  It’s going to be an amusing two years—and let’s hope that’s her total tenure—with Boebert in the House. But perhaps it will be distressing as well, for several venues, including the Independent and Alternet (click on screenshots) have repeated accusations that Boebert was not only was in favor of the storming of the Capitol last week (she was one of the House Republicans asking for an “audit” of the election results), but was also tweeting out information where Nancy Pelosi was during the siege, ostensibly to help protestors locate the Speaker. 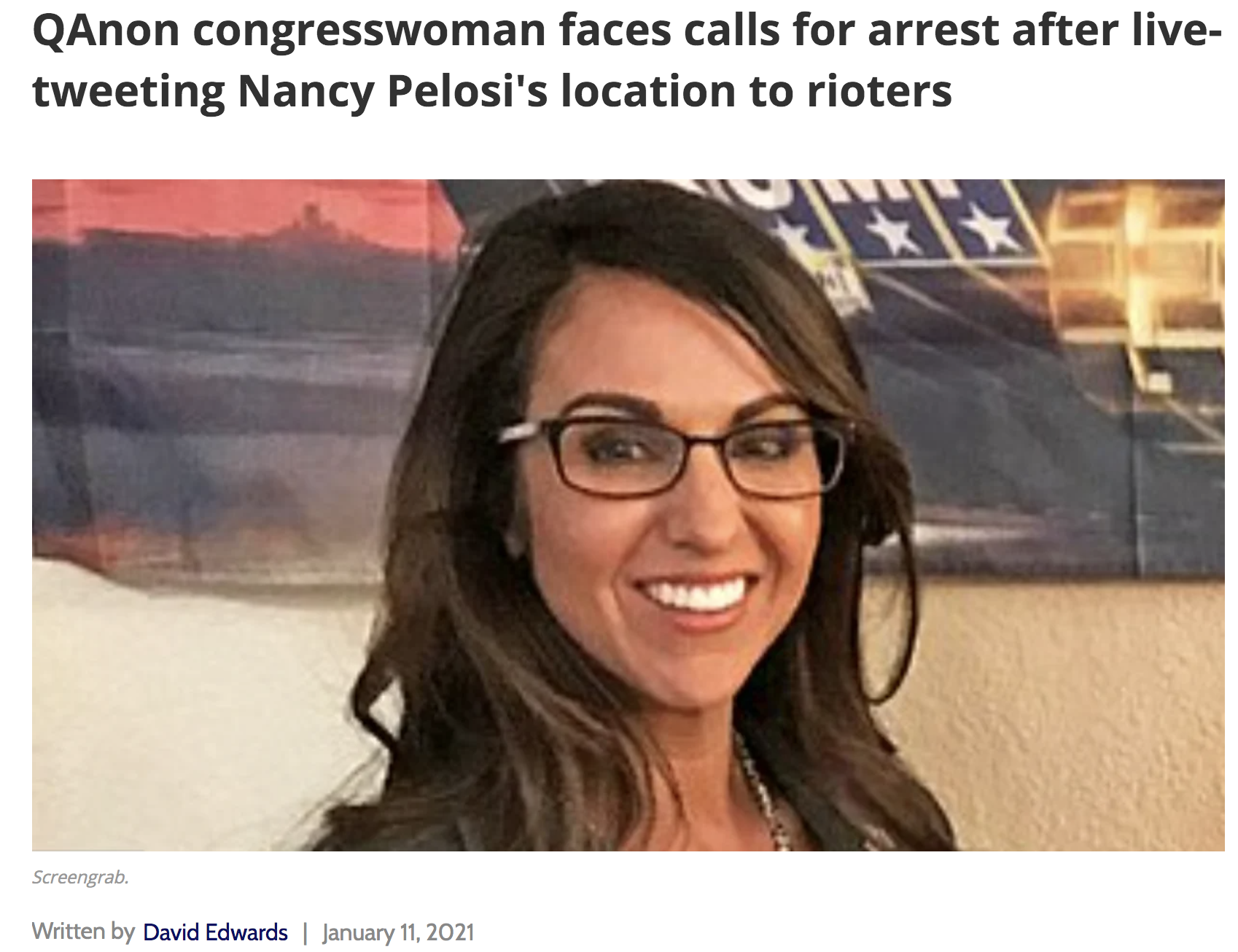 As for the accusations that Boebert was egging on, or at least sympathetic to, the demonstrators, we have this (from the Independent):

Just before the attack, Ms Boebert gave an impassioned speech in which she claimed some of her constituents were among the mob fighting the police on the Capitol steps at the time.

“Madame Speaker, I have constituents outside this building right now and I promised to be their voice,” Ms Boebert said while challenging the results of the election in Arizona. “It is my separate but equal obligation to weigh in on this election and object.”

Ms Boebert is no stranger to far-right extremist groups.

ABC News reported that her former campaign manager, Sherronna Bishop, had praised the Proud Boys, an SPLC-designated hate group that travels the country starting fights at protests and espouses a neo-fascist ideology.

The Proud Boys were among those who attacked the US Capitol.

. . . and a tweet that Boebert issued the morning of the siege.

Now what on earth did she mean by that? 1776 was the American Revolution, and did she simply think that the protest itself outside the Capitol was “1776”? That doesn’t make a lot of sense. Was she complicit in incitement? You be the judge.

As for the claim that she was helping the protestors locate Pelosi, I don’t see much evidence. What’s adduced is this pair of tweets:

The Speaker has been removed from the chambers.

Which gave rise to these accusations:

After announcing the morning of the insurrection that she is part of the revolution, she literally tweets the potential location of the Speaker as the terrorists break into the Capitol. Please investigate @FBI @FBIWFO @CBI_Colorado pic.twitter.com/SKpTLyPjTu

@FBIWFO please arrest @laurenboabert for aiding and abetting those who were hunting down @SpeakerPelosi on Jan, 6th by tweeting the Speaker's whereabouts.

She's 5ft tall, 100 pounds and carries a Glock (and won't stop telling everyone).

I can’t force myself to conclude that Boebert was using these tweets to help the insurrectionists find the Speaker. She could simply have been reporting what was going on with her group of fellow Representatives. But she really should have kept her fingers off the keyboard. You don’t tweet when a crazed mob is bent on breaking into your chambers. Clearly, like Trump, she’s going to use Twitter as a political weapon.

But this isn’t the last we’ll hear of Lauren Boebert. Trump may be on the way out, but we still have an unhinged government official with a love of tweeting running loose in the Capitol. And, unlike Trump, she has a Glock. I smell trouble.

UPDATE: Boebert issued a statement in response to calls for her resignation, which you can read here. Note that she quotes Johnny Depp and Madonna as real instigators of violence.

Lauren Boebert has had numerous brushes with the law herself (pdf) for petty offenses including disorderly conduct, fleeing law enforcement, speeding and careless driving, driving with expired plates, failures to appear in court, and other offenses.

Check out the rap sheet. Read about her husband, too, as there’s one funny quip about her future husband exposing himself in a bar (before they were married):

Two females described the incident to Garfield County Sheriff officers and signed witness statements leading to Jayson’s arrest. Jayson told the officers that he had “displayed his thumb pretending it was his genitals in a gesture of fun,” according to the report, but one of the victims wrote in her statement, “I know that wasn’t his thumb, because thumbs aren’t 6 inches long.”

45 thoughts on “Lauren Boebert, Congressional loon, now faces calls for resignation and pushback on her need to carry a gun in the Capitol”