Readers have responded generously with my appeal for photos, but remember—I can always use new ones.

Today’s photos come from regular Mark Sturtevant in Michigan, who has supplied us with pictures of arthropods. His notes and IDs are indented. Click photos to enlarge.

The first two pictures show a rather sinister looking assassin bug known as the masked hunter (Reduvius personatus). Nymphs of this species lurk on soil, and they conceal themselves with soil or sand particles as shown in the linked picture. 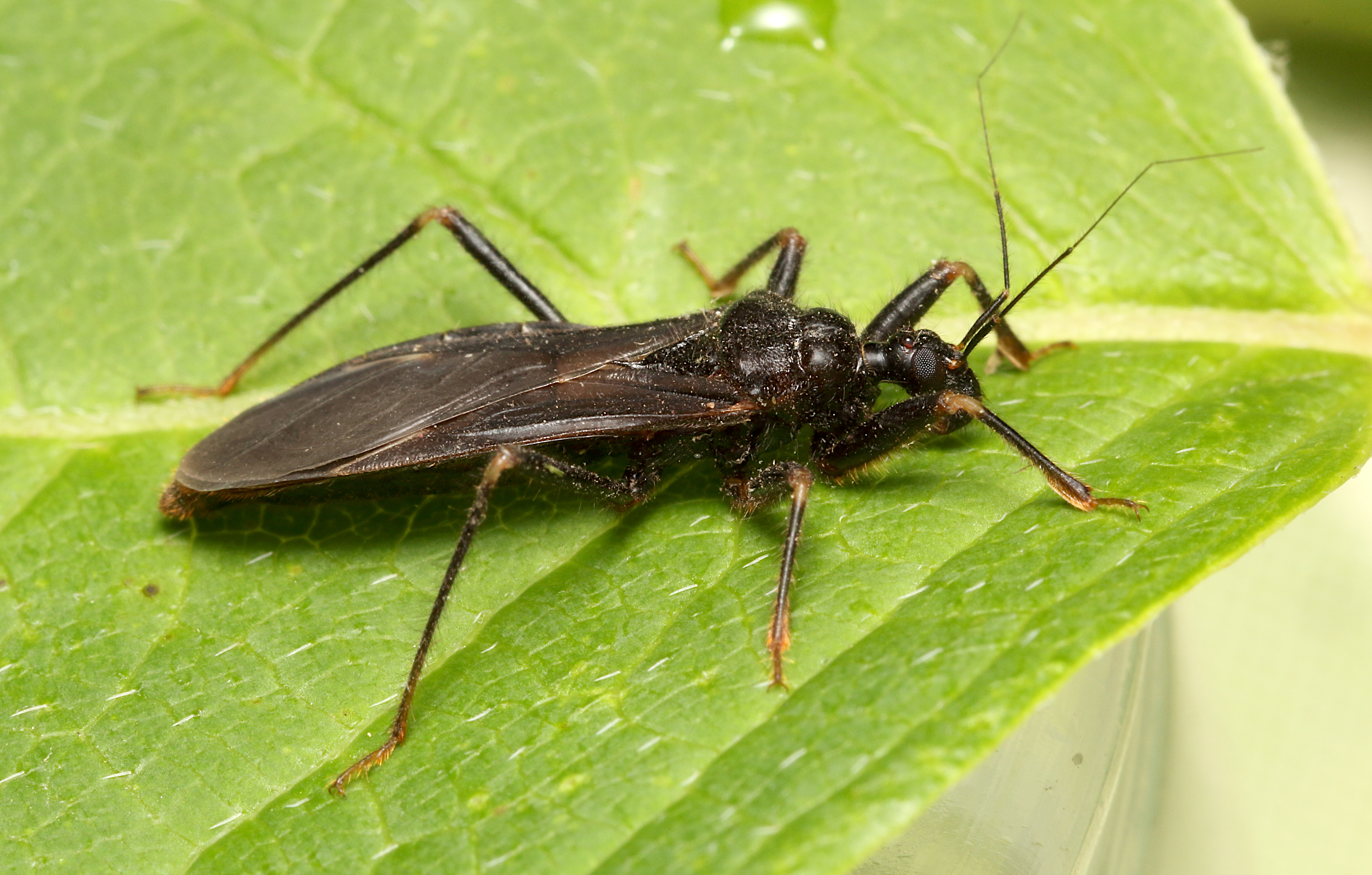 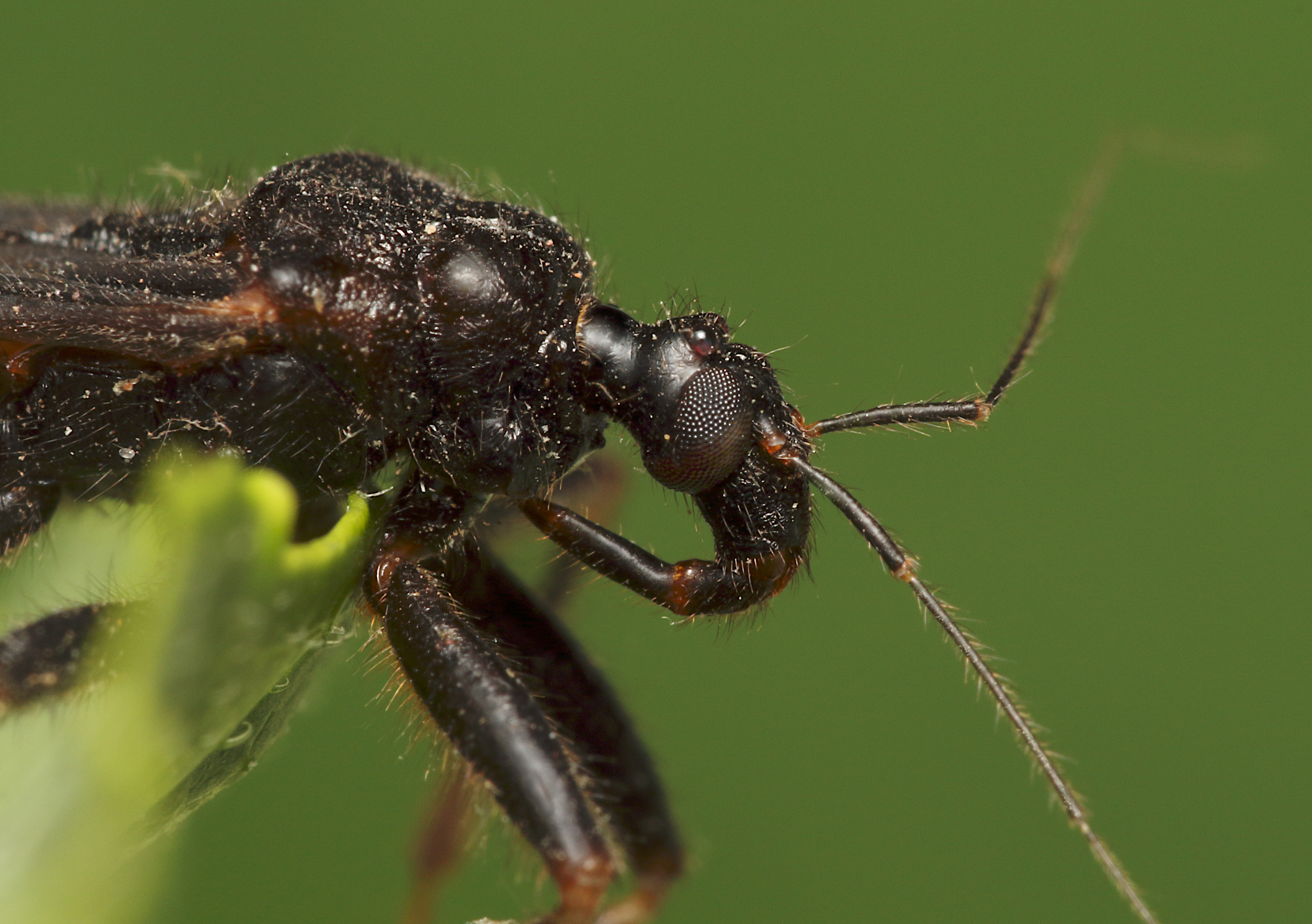 Next is a small Crabronid wasp, genus Cerceris. There are several similar-looking species, so that is as far as I can go with this one. These wasps provision their burrows with paralyzed insects, and most species prey on beetles. 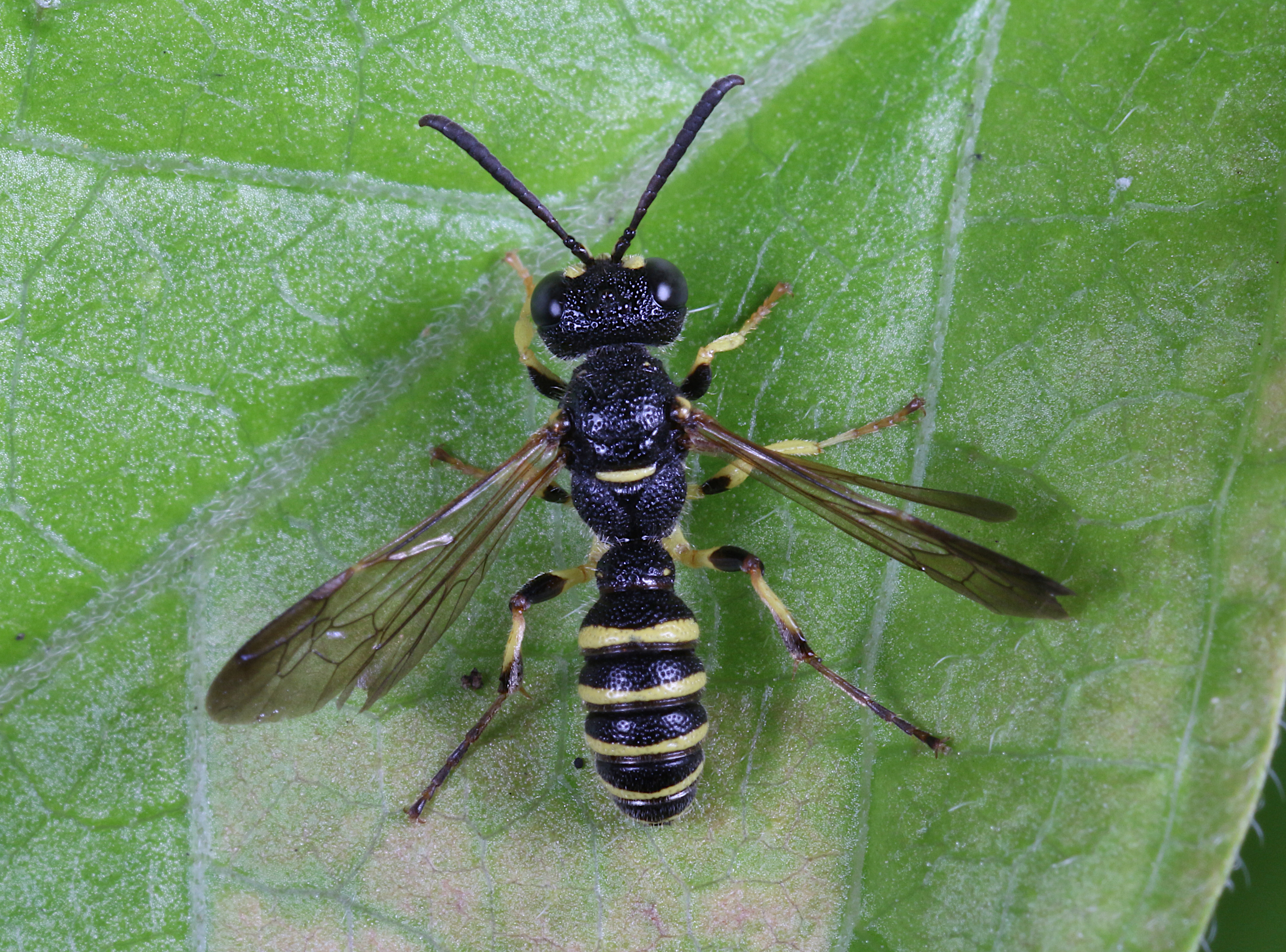 The wasp shown in the following picture is another Crabronid (Tachysphex pompiliformis), and she has paralyzed a grasshopper and is dragging it to her burrow where she will lay an egg on it. Every tuft of grass posed a Herculean task for this little wasp, and her burrow was many yards away. I often see them with grasshoppers in what I call the Magic Field, which is where this one was, but for once there were no “kleptoparasitic” flies closely following. When those much-cursed flies are present, the labor of the wasp will be more Sisyphean than Herculean since the flies will lay eggs on the grasshopper, and her efforts will be for nothing. 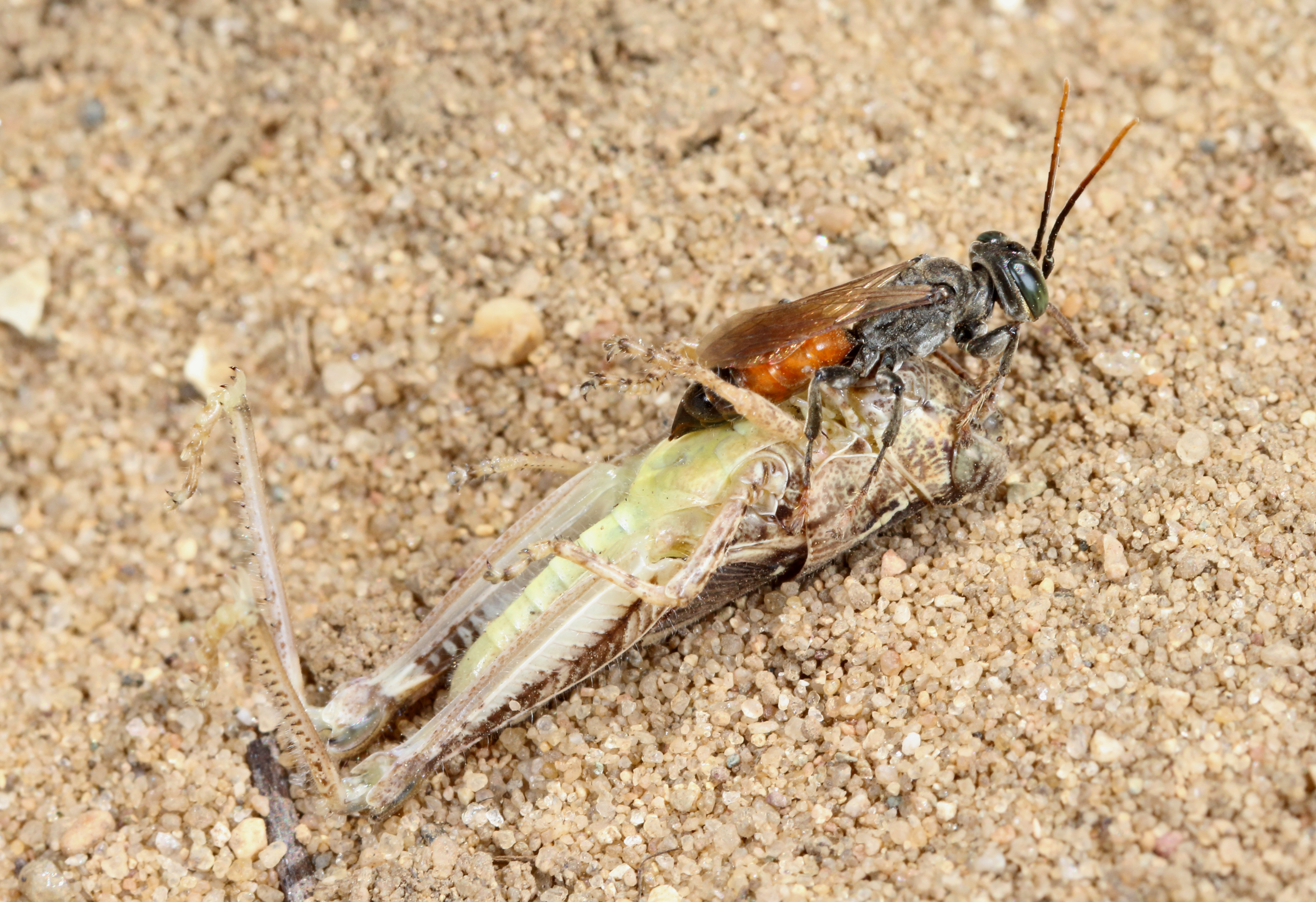 This is temporarily becoming a post about wasps. Another common sight in the Magic Field are the larger thread-waisted wasps known as Ammophila procera, as shown in the next pictures. These wasps feed their larvae  paralyzed caterpillars, and unlike the small Tachysphex, the larger Ammophila are perfectly capable of flying in with her prey. 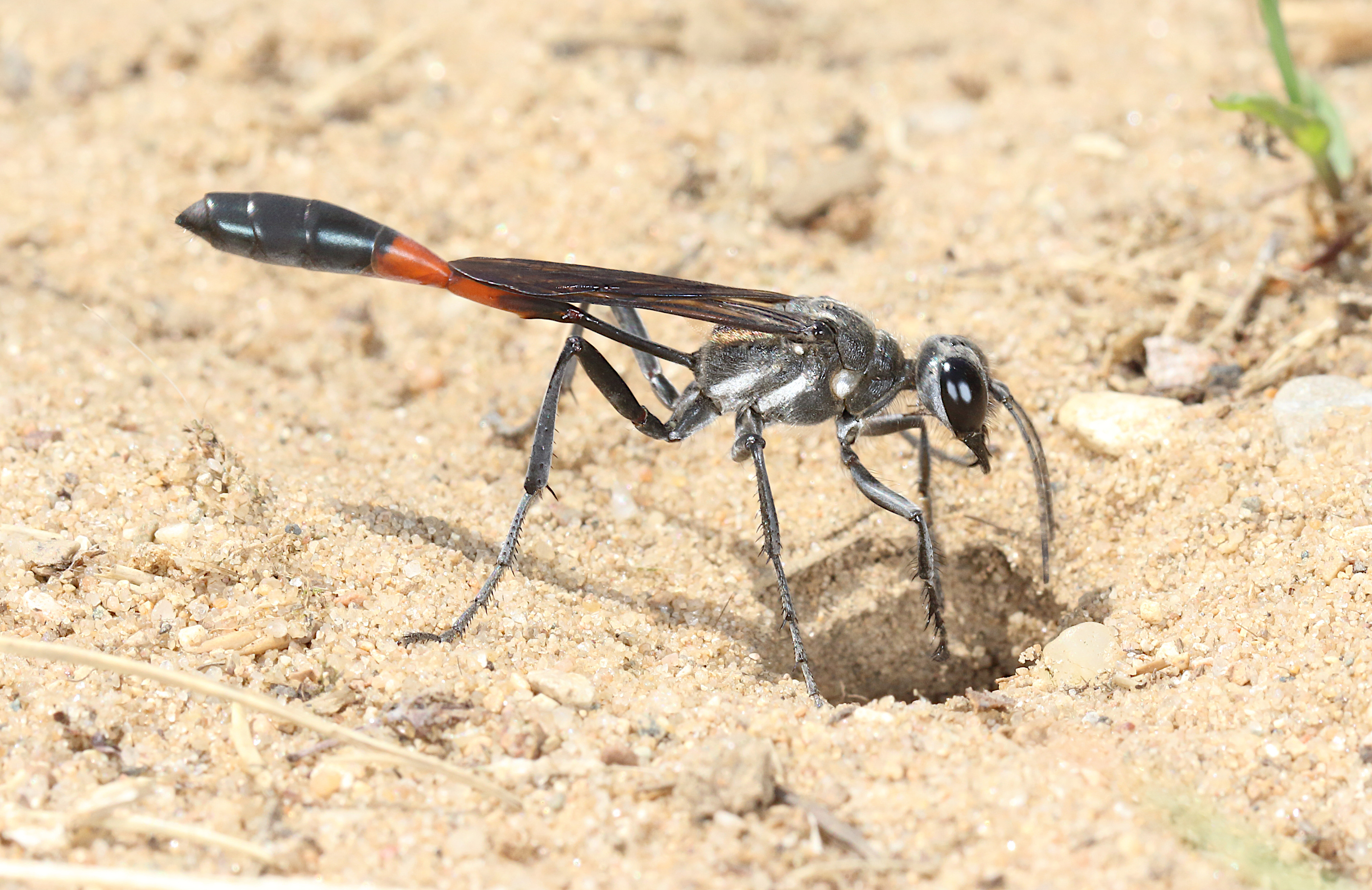 Ammophila are a little startling when they turn to the camera. Their oversized mandibles are used like hot-dog tongs to carry caterpillars. 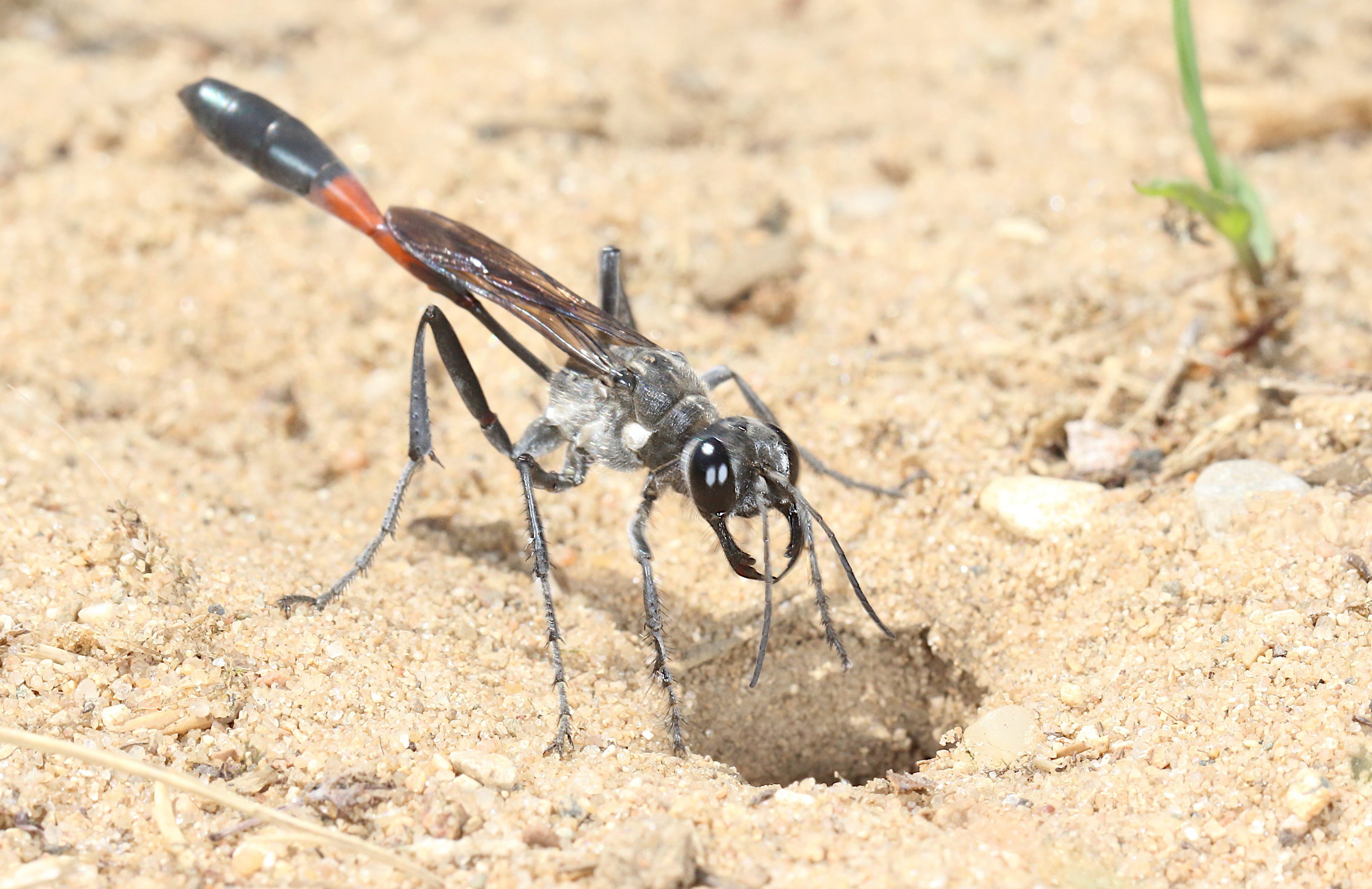 I have recorded how they handle the caterpillars (to show later), but for now here is a short documentary about this subject by a young David Attenborough:

I became interested in watching thread-waisted wasps excavate their burrows, and so the last pictures show our wasp doing this. Note that she carries away the tell-tale dirt by cradling it in her jaws and front legs. This action is blurred here because I really don’t do well with action shots. 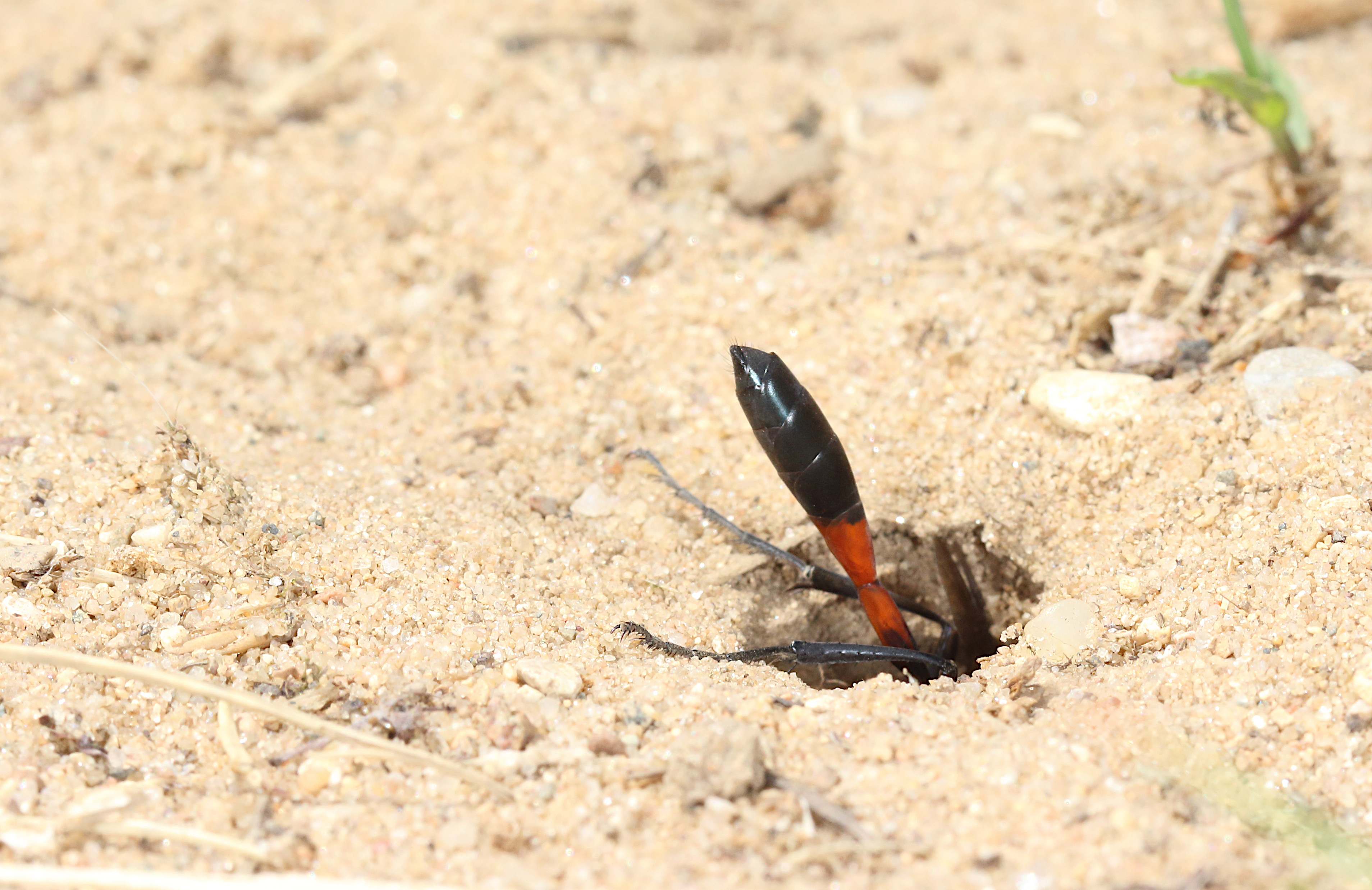 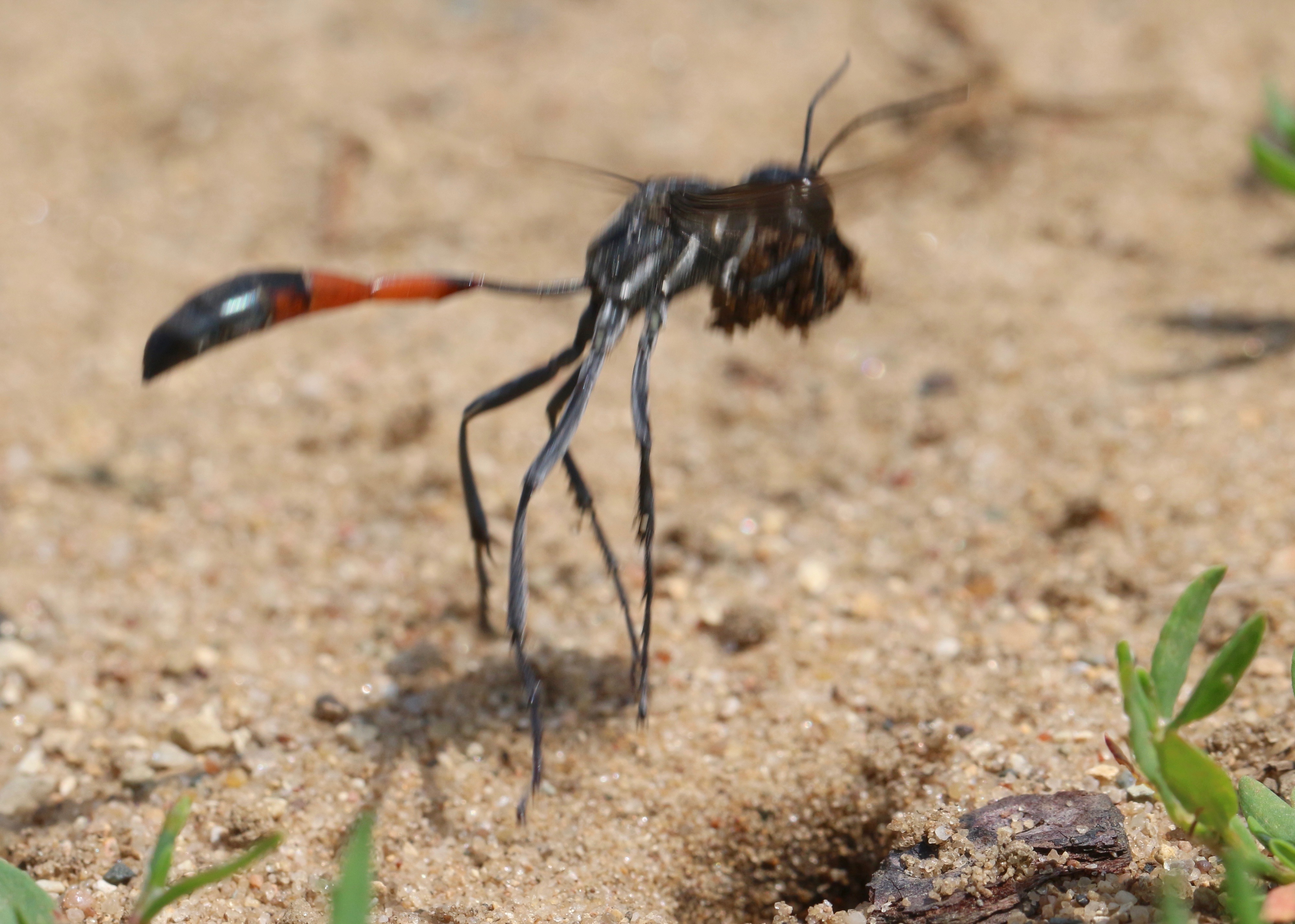 The butterfly shown next is the silver spotted skipper (Epargyreus clarus), which is our largest skipper. It is getting nutrients from bird poo, as is a leaf-footed bug nymph (maybe Acanthocephala terminalis). There are actually 3 insect orders in this picture, all in plain view. Perhaps a reader can identify the third one. 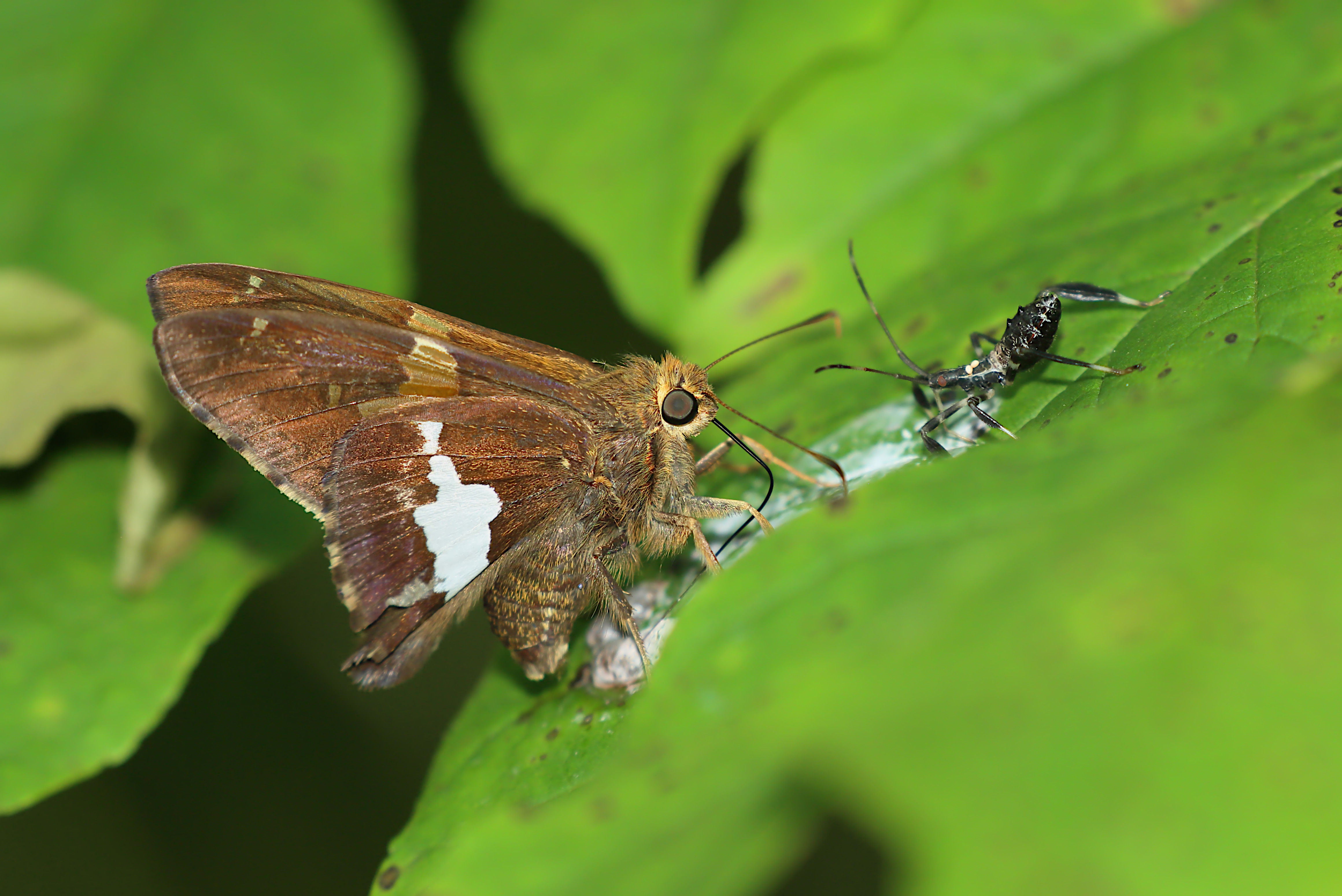 The final picture is a viceroy butterfly (Limenitis archippus), in a composition that is evocative of summers’ simpler priorities, now long gone. 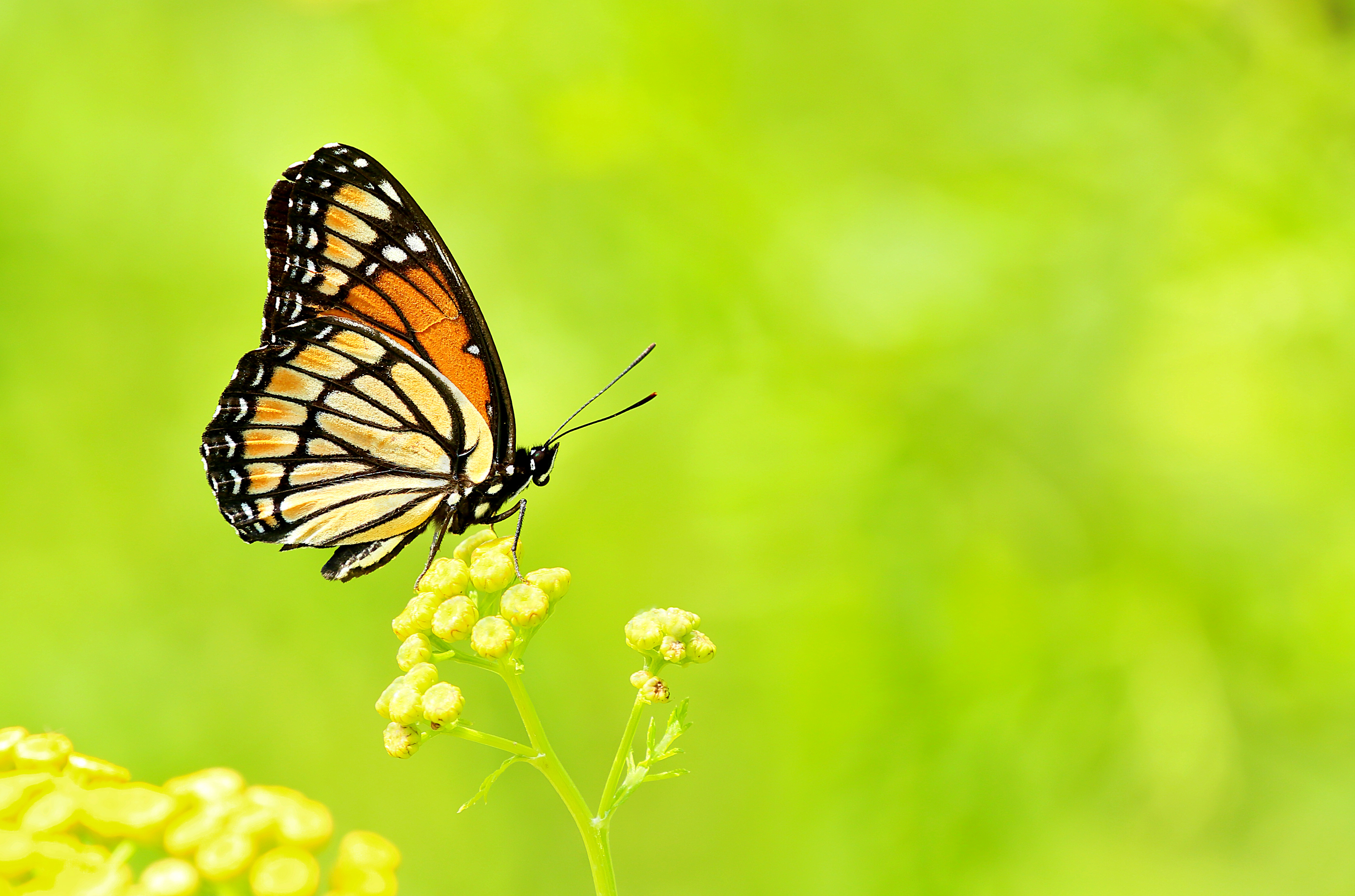