Thanks to the many readers who have been sending me photos. Keep ’em coming, please!

Today’s set of insect photos come from regular Mark Sturtevant, and I’ve indented his comments and IDs. I find the prey-locating and the drilling abilities of ichneumon wasps (below) almost beyond comprehension.

This is a set of pictures of insects that were taken over a short period of time over a year ago. By chance, they focus on a small number of species.

First up is a young widow skimmer dragonfly (Libellula luctuosa). In many of our local fields they are among the most common dragonflies, emerging in steady waves over most of the summer. As this young male matures, it will become accented with a white waxy bloom on its body and wings. 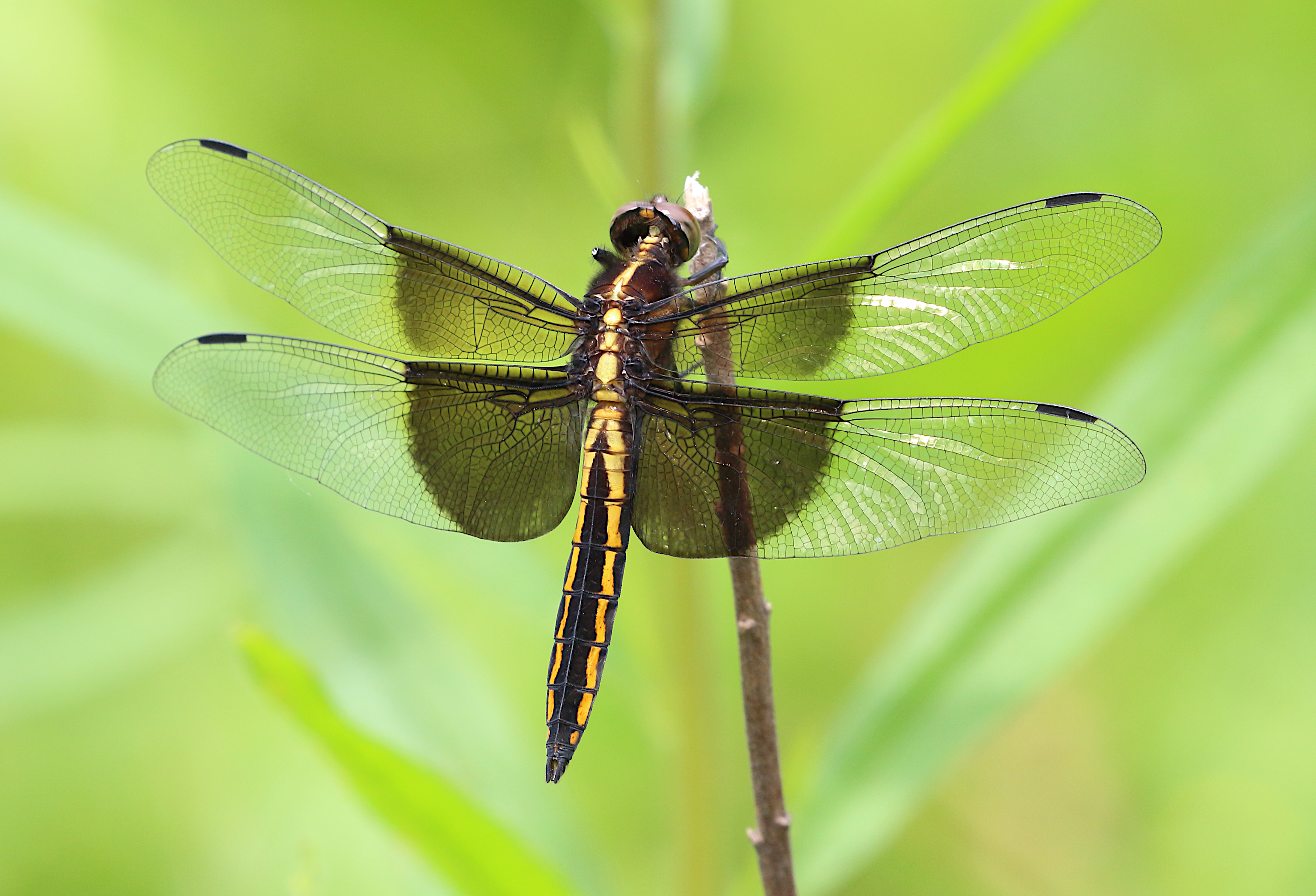 Next is a picture of one of our largest dragonflies, the spatterdock darner (Rhionaeschna mutata). I can well remember my trepidation when first seeing these swift and powerful fliers, since darner dragonflies can be especially difficult to photograph because many of them just . don’t . land (shakes fist at green darners especially). But spatterdocks can be kind to photographers because they will land after a time, and are even surprisingly tolerant of being approached. This stunning specimen is a mature male. 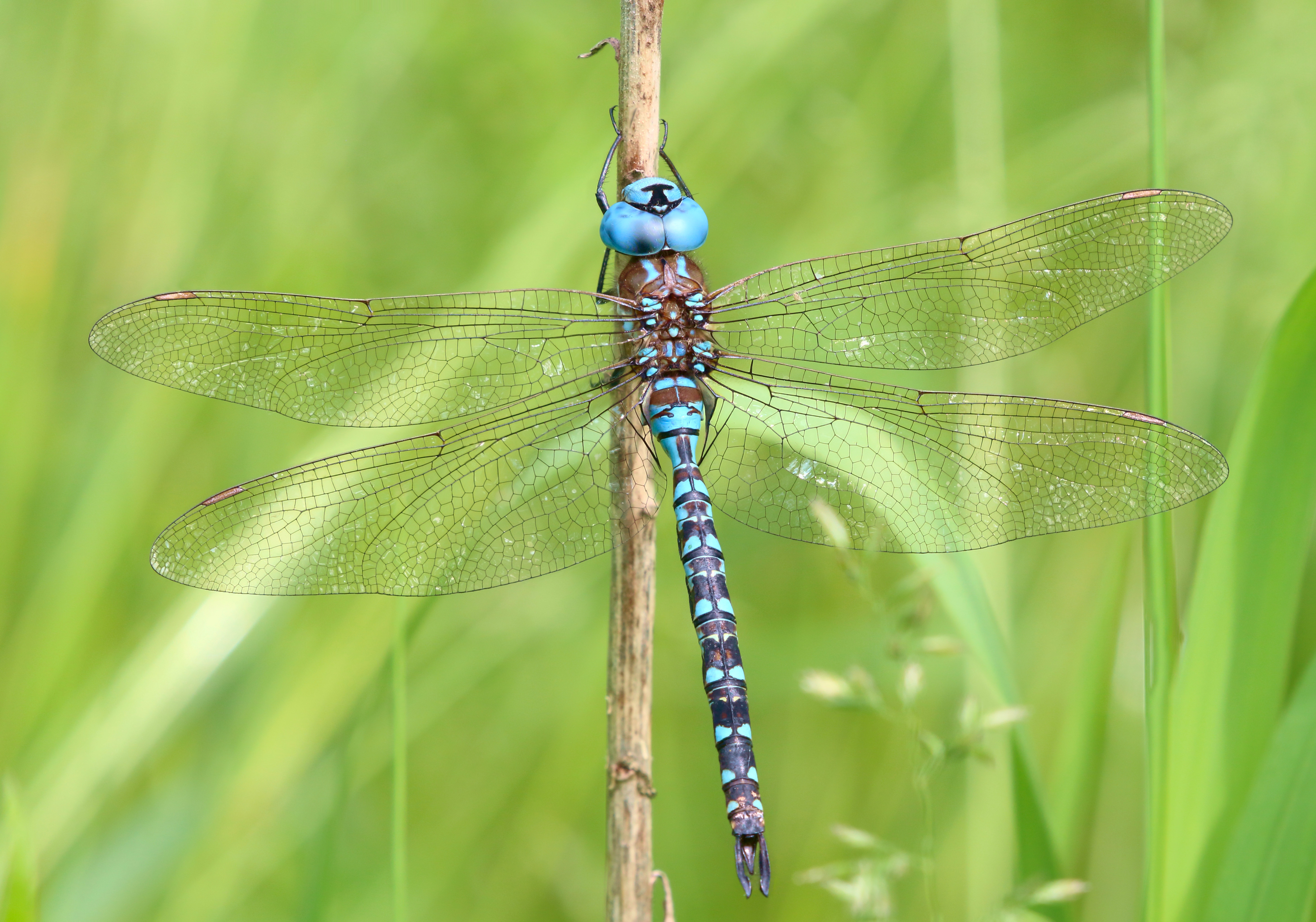 The next pictures are of another male spatterdock. I was just loading my gear into the car after a long day outdoors, when this one landed nearby while carrying … something. So out came the camera again. One can see that the spatterdock had taken another dragonfly (probably a blue dasher), and it was steadily stuffing the meal down its gaping maw. I was able to get in very close as he was finishing up. What a glutton! 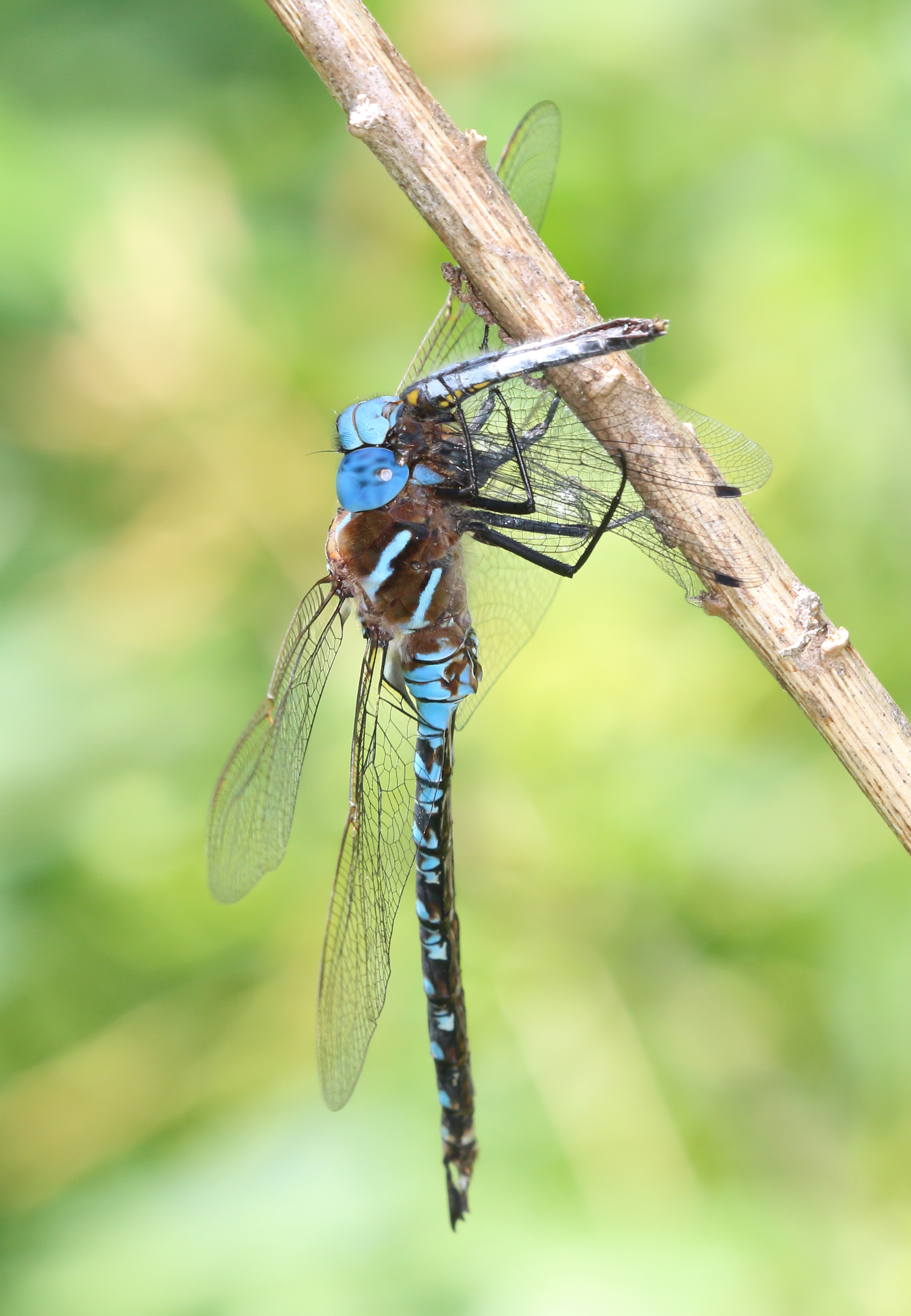 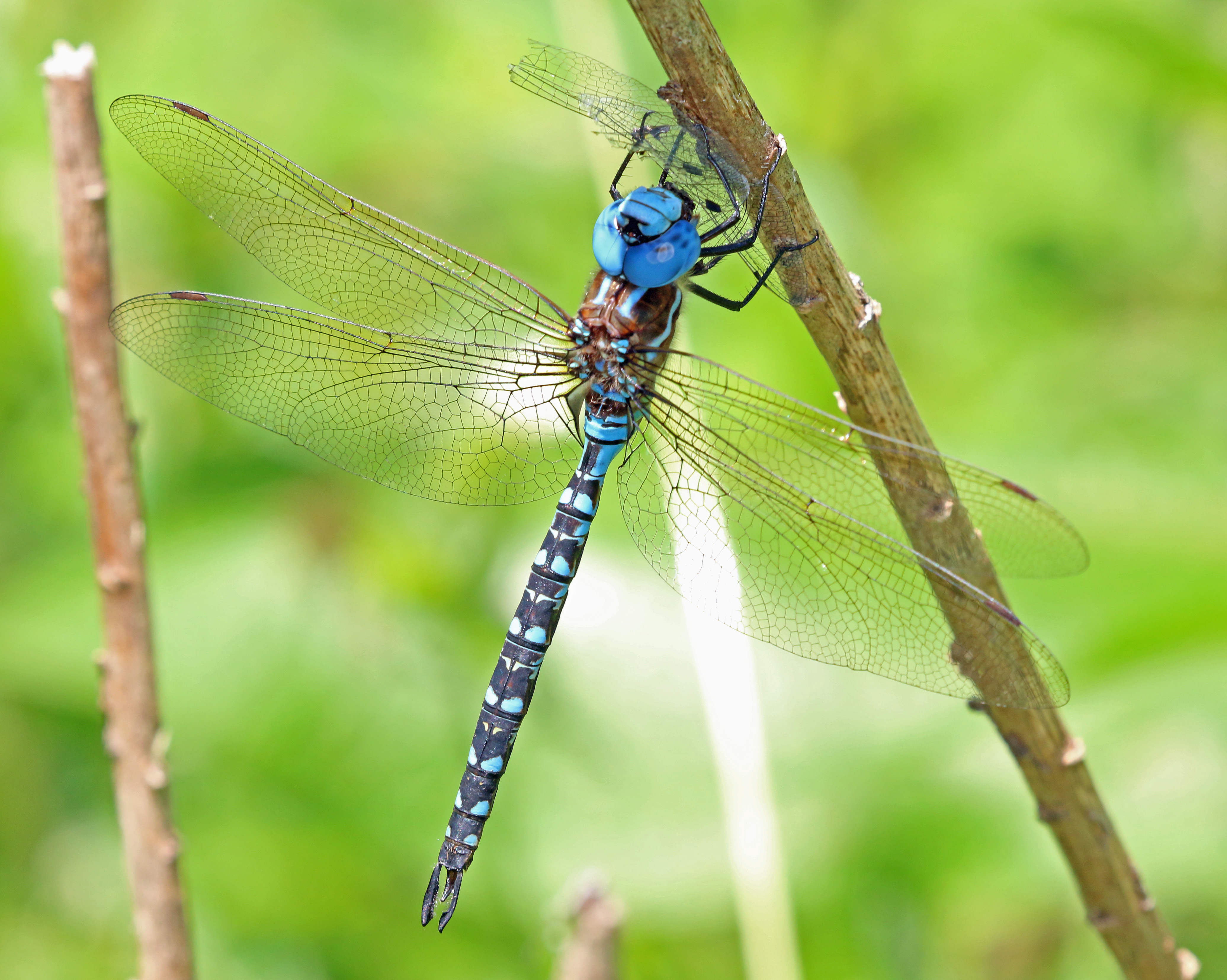 Early last summer I was visiting a new park that was near my work. It was beautiful, featuring a sunny pond that was swarming with dragonflies, a lush meadow filled with wildflowers, and even a wetland area dotted with several dead trees. The dead trees were of timely interest since according to my calendar (one must of course note important insect activities in their calendar), giant ichneumon wasps from the genus Megarhyssa were supposed to be around. So I invested considerable time inspecting the dead trees, since that would be where these insects would be laying eggs. There are two species of these large parasitic wasps around here, but I had not seen one except in passing for several years.

A fellow nature lover saw me with my cameras, and came over to chat. After he had learned that I photograph insects, his next words were “Oh, did you see the giant ichneumons?” I must have looked fairly gob-smacked, but he pointed out the tree, and yes indeed there were giant ichneumons! At least a dozen of the large insects on a single tree. Incredible! The following pictures shows a few of them doing their thing.

Giant ichneumons are parasitic wasps, and females use their extraordinarily long ovipositor to drill into dead wood where they target the larva of another wasp known as the horntail. The first two pictures show one of the species, Megarhyssa macrurus. The raised ovipositor is already drilled a couple inches into the wood. At an early stage of this process, the base of the drill becomes partly wrapped with intersegmental membrane, as shown in the 2nd picture. Amazingly, over a period of several minutes the entire ovipositor will be worked into solid wood. She is able to somehow pinpoint a horntail larva and then thread an egg down her ovipositor to the prey deep in the tree. The link includes a film that shows the drilling process. 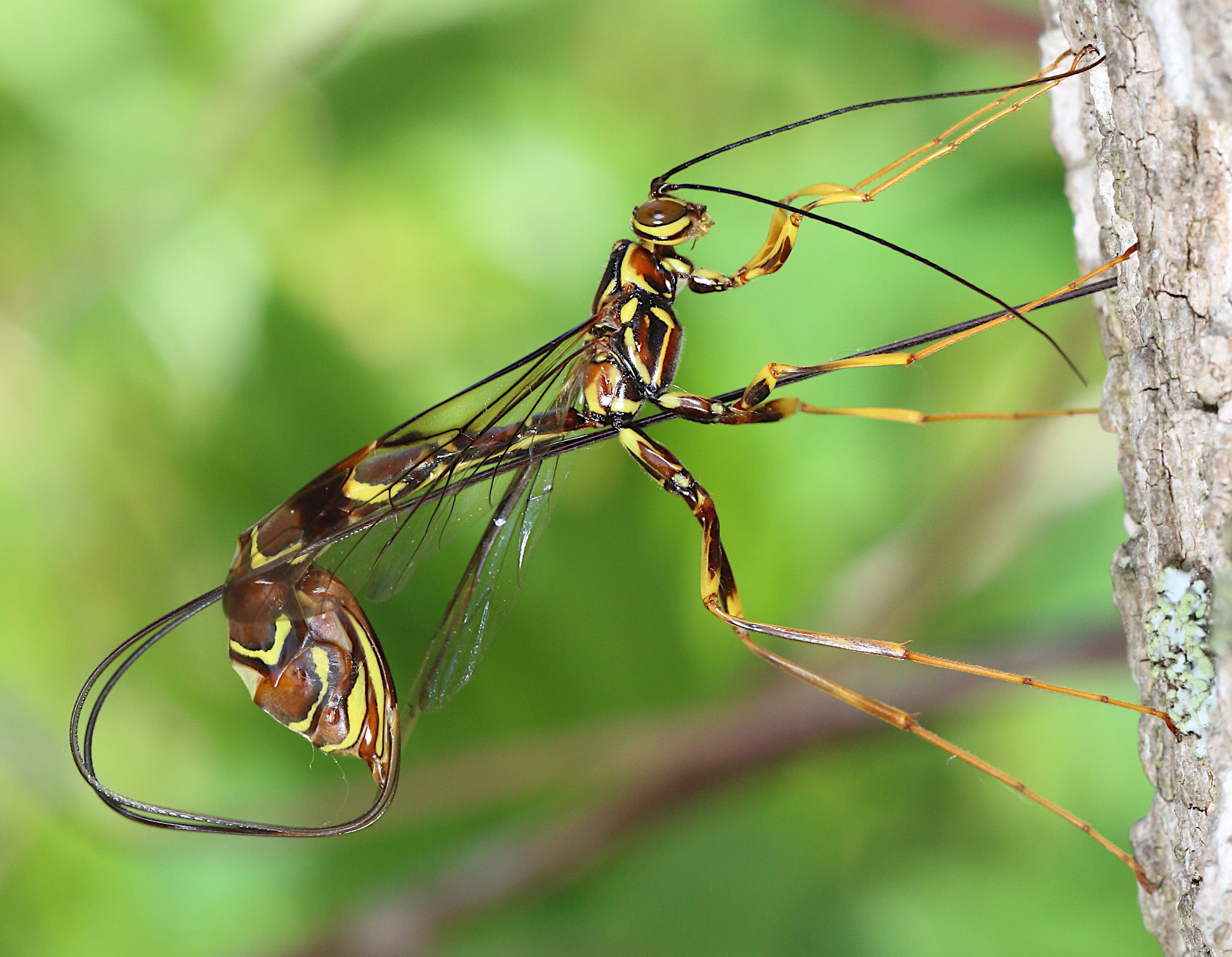 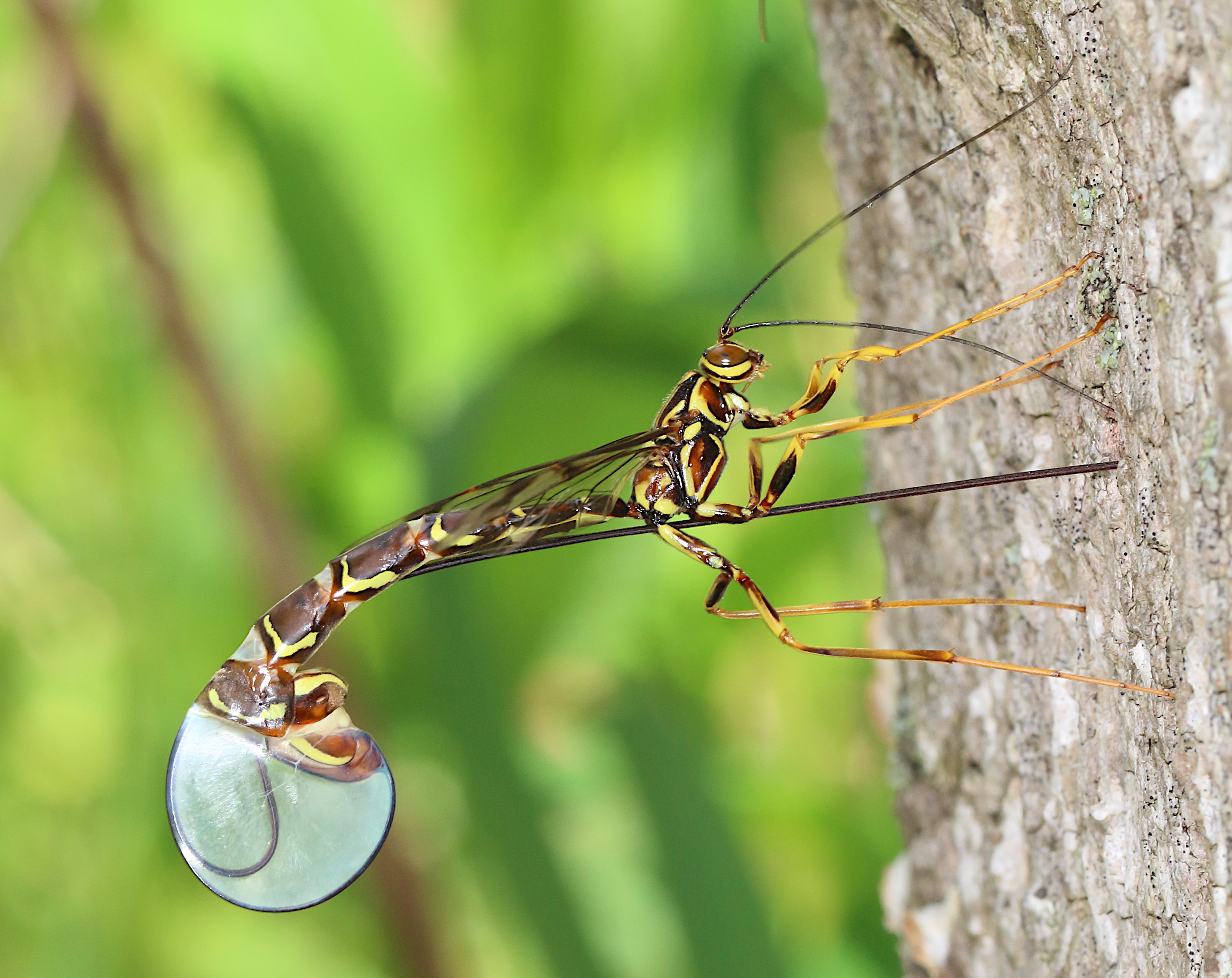 Among the many giant ichneumons on the tree were several examples of both species. The other local species, M. atrata, is shown next. This one has drilled almost all the way into the wood. The long coils that are looping out are not the ovipositor, but are a pair of supporting sheaths that are bent aside as she drills. 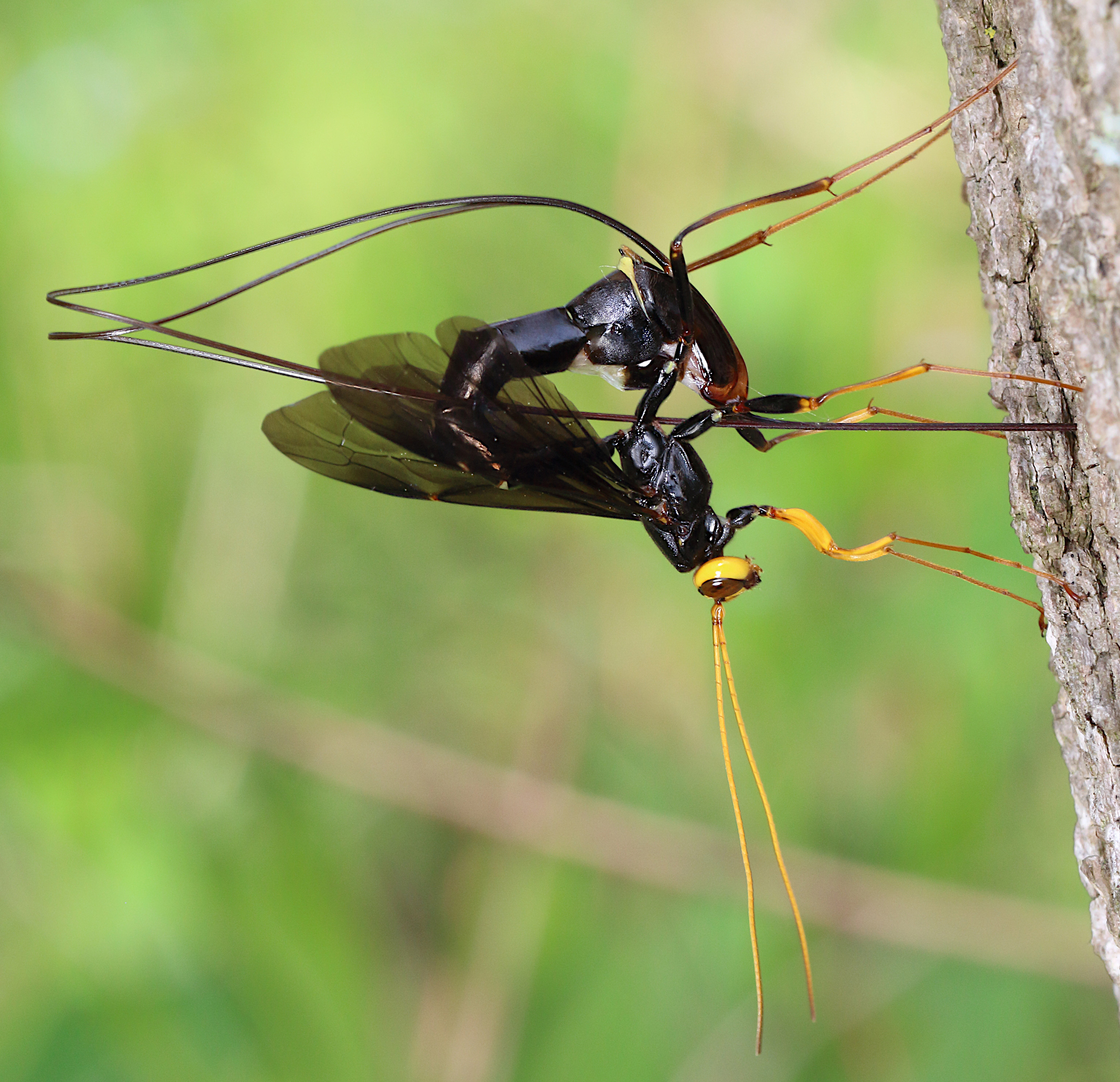 Next is one of several males that were restlessly wandering up and down the tree, checking out each female. These were presumably hoping for a mating opportunity. Males of the two species look quite similar, but I think this one is M. macrurus. 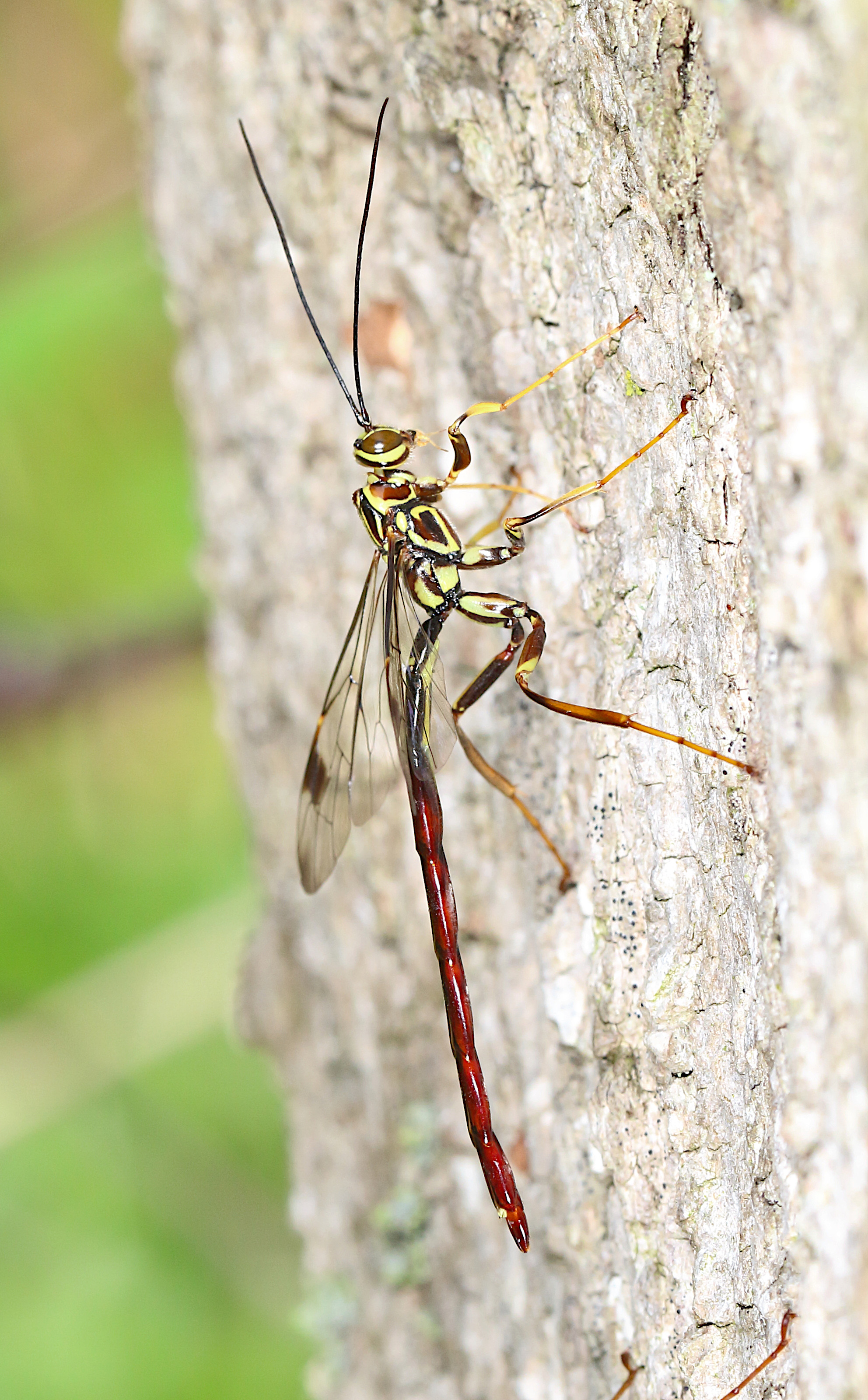 Over an extended time, various females came, raised their ovipositers, and drilled in. After a time they would slowly retract the ovipositor and move on to a different spot in the tree.

At one point a female atrata actually straddled a macrurus who was already drilling, and the interloper began drilling into the same hole! You can see this in the final picture if you look closely. This “claim jumping “ is probably common among these competing species. 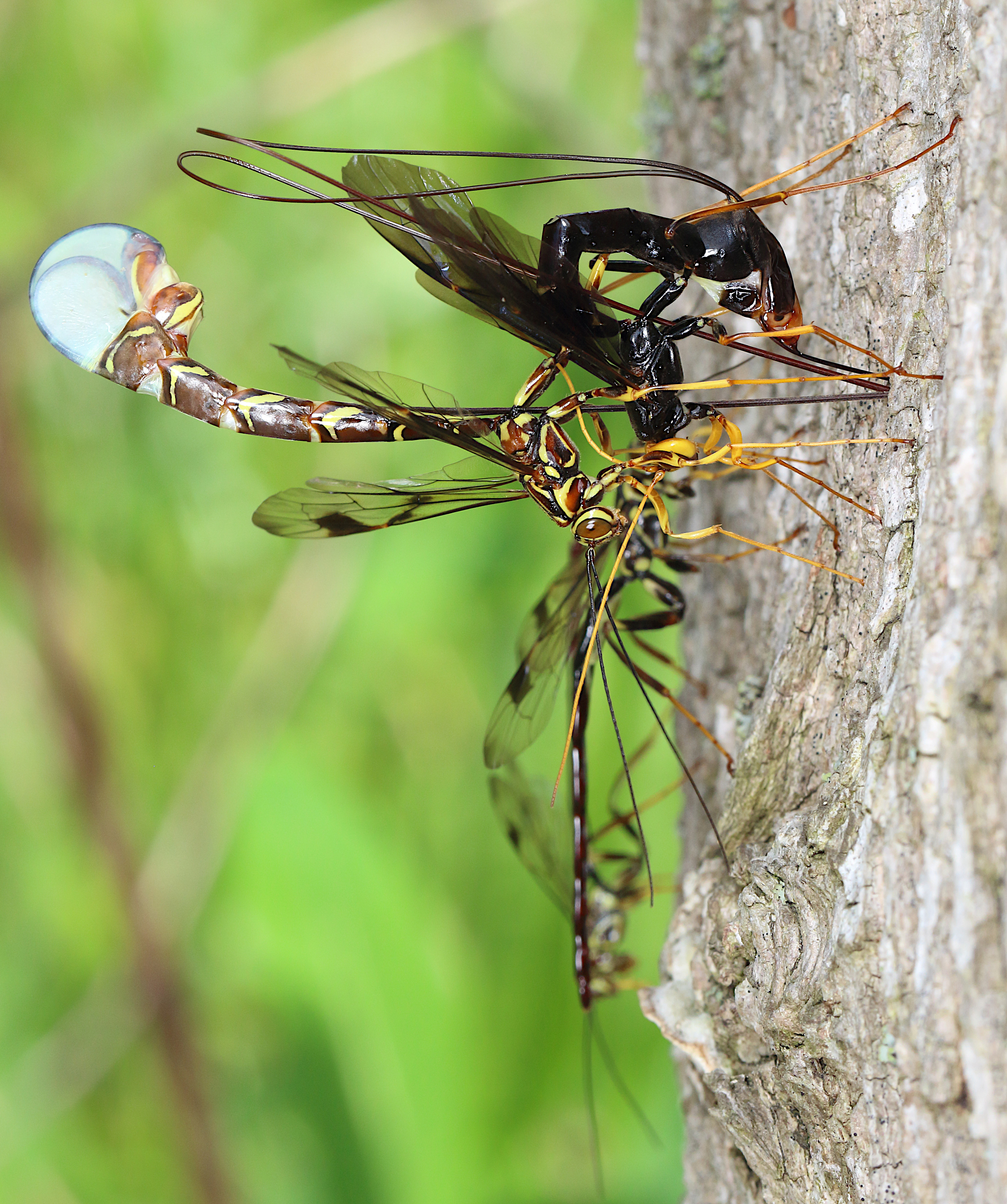