As Britain races towards secularism faster than the U.S., the faithful are making their last stands. One such stand is this Mobius strip of a memorial slated to be started next spring in Coleshill, near Birmingham. As this article in The Times explains, it’s to be called “The Eternal Wall of Answered Prayer”, and it’s huge. (Of course, an Eternal Wall of Unanswered Prayer would be much, much larger!)

Click to read; it may be paywalled, but judicious inquiry will yield you the document: 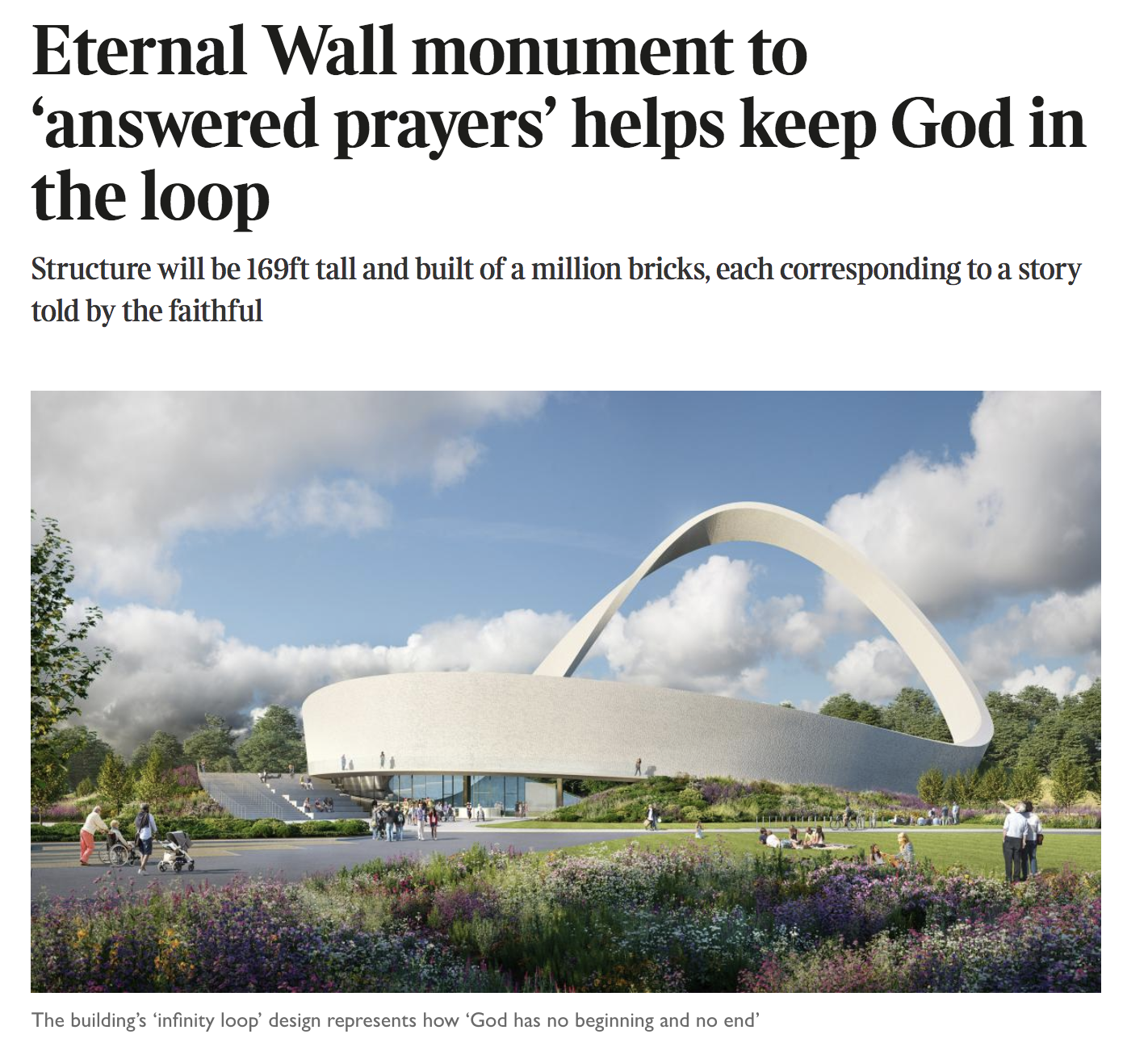 Here’s how big it is:

At 169ft tall, the monument will be just a few inches shorter than Nelson’s Column in London but almost three times the height of the Angel of the North, Anthony Gormley’s 66ft-high steel structure in Gateshead, Tyne and Wear. 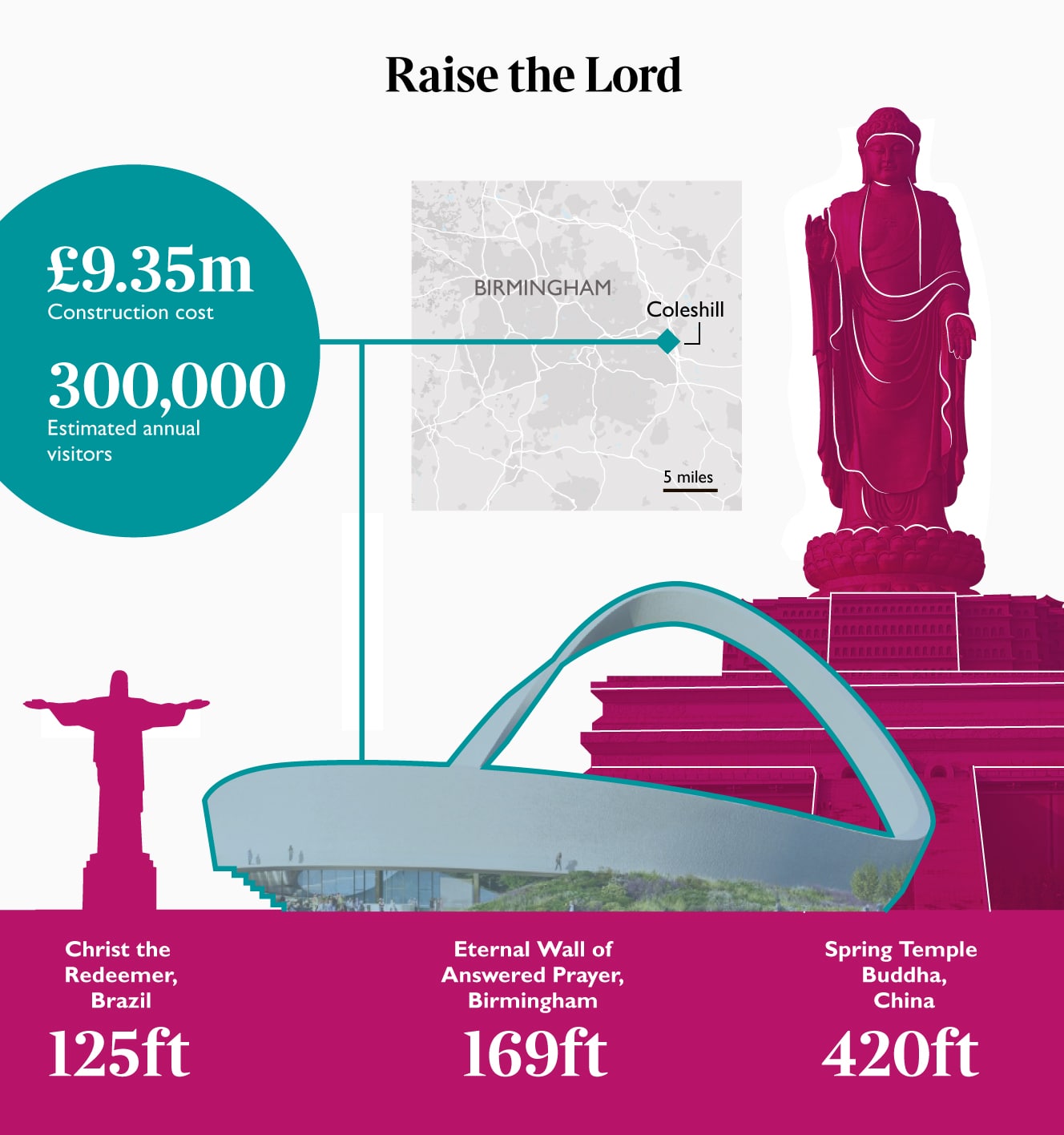 It’s a big ‘un!  It was envisioned by Richard Gamble, former chaplain of the Leicester City football club, who had a revelation to build it.  He began a crowdfunding campaign had an international competition to design it, and then crowdfunded the construction. It’ll contain a gazillion answered prayers (actually, about a million).

Each brick in the wall will be associated with a Christian prayer and feature a unique code that can be read with a smartphone app. Visitors can use their phones to learn about the prayers individuals feel were answered, as well as the personal stories behind them. For bricks out of reach, the app can zoom in on a map of the monument.

Gamble, 51, and a team of volunteers have been collecting people’s testimonies online since 2018, noticing a surge in messages during the pandemic.

“Until this year it had been a small trickle,” he said. “But then it started accelerating. During lockdown it went mad.”

They need £9.35 million to finish it off, but, you know, God will provide; all you have to do is pray. So far God has prompted the faithful to ante up nearly £6 million. And you can submit answered prayers here.

It’s curious that God decided to answer more prayers during the lockdown (were more people were praying?), but the one prayer he didn’t answer was “God, please make this pandemic disappear.” But of course He works in mysterious ways, and one of those ways is killing off lots of innocent people.

The article gives examples of some of the prayers that will appear on the bricks:

The apparent miracles people have shared range from the dramatic to the mundane.

One person wrote about how their baby daughter had been rushed to hospital with a brain haemorrhage but survived and is now a healthy five-year-old. A doctor told a story about how, after 20 minutes kneeling in prayer, he and his team were sent a delivery of personal protective equipment that had been cancelled. Others also talked about mending difficult relationships and overcoming serious illnesses.

At the other end of the spectrum, one person explained how they had managed to have an “impossible meeting” with a dentist while suffering a swollen gum during lockdown.

“God is sooooooooooo good! He listens to our hearts’ cry,” they wrote.

But God is also sooooooo bad! He’s killed a million people in this pandemic, and he could have stopped it. At any rate, there’s been some discussion about “inclusivity”—not racial inclusivity but religious inclusivity. Not all religions are Christian, so they’ll be an exhibit inside about how adherents to other faiths pray.

I still think the humanists should build an Eternal Wall of Unanswered Prayers nearby, but to make its point it would have to be larger than this one, and that would cost too much.