A big group of researchers from around the world—science is truly international in this case—just published a paper in Proceedings of the National Academy of Sciences that involved sequencing the complete genome of 18 species of penguins as well as an outgroup, the southern giant petrel.  (Researchers differ on the number of extant penguin species, ranging from 17 to 20, as some populations are geographically isolated, making it hard to discern species status.)

The DNA information was combined with fossil data to yield a family tree of the living species, and also to reconstruct their evolutionary history, which suggested that the ancestor of all living and fossil penguins probably lived not in Antarctica, but on the coasts of Australia and/or New Zealand. Finally, the researchers were able to narrow in on a group of genes that may have undergone natural selection in the group, suggesting which adaptations were crucial for making a well-functioning penguin.

You can access the paper by clicking on the screenshot below, or see the pdf here. The full reference is at the bottom, and there’s a popular summary article at CNN.

I’ll try to be brief here. First, I’ve put below the family tree of living penguins deduced from the DNA information, with the divergence times that come from both DNA and fossil data. The radiation started around the beginning of the Miocene, roughly 22 million years ago.

As you can see, the largest species—the emperor and king penguins, form their own “outgroup” to the rest of the penguins, splitting off from the rest early in the group’s radiation but splitting from each other only about two million years ago. (Despite the radiation being old, most modern species split from their closest relatives only within the last few million years.)

The average temperature of the southern ocean is given by the graph in white and the scale on the left, with the dotted red line showing the beginning of the “strengthening” of the Antarctic Circumpolar Current (ACC), a strong ocean current that sweeps clockwise around Antarctica as seen from the South Pole, isolating the continent from warmer ocean temperatures to the north and allowing the ice sheet to persist.  A lot of the radiation followed the advent of this current’s new strength, which also coincided with the opening of the Drake Passage, creating a water gap between the previously connected land masses of Antarctica and South America.  It also produced a lot of sub-Antarctic islands that were also sites for colonization. And geographic isolation, possibly enforced by temperature, is an impetus for the formation of new species.

It was this stronger current and geographic separation that, the authors say, prompted new speciation events in penguins (most biologists assume that new species usually arise after populations become geographically separated). They did, however, detect some gene flow between penguin species, though it wasn’t extensive enough to wipe out the differences that produced this tree: 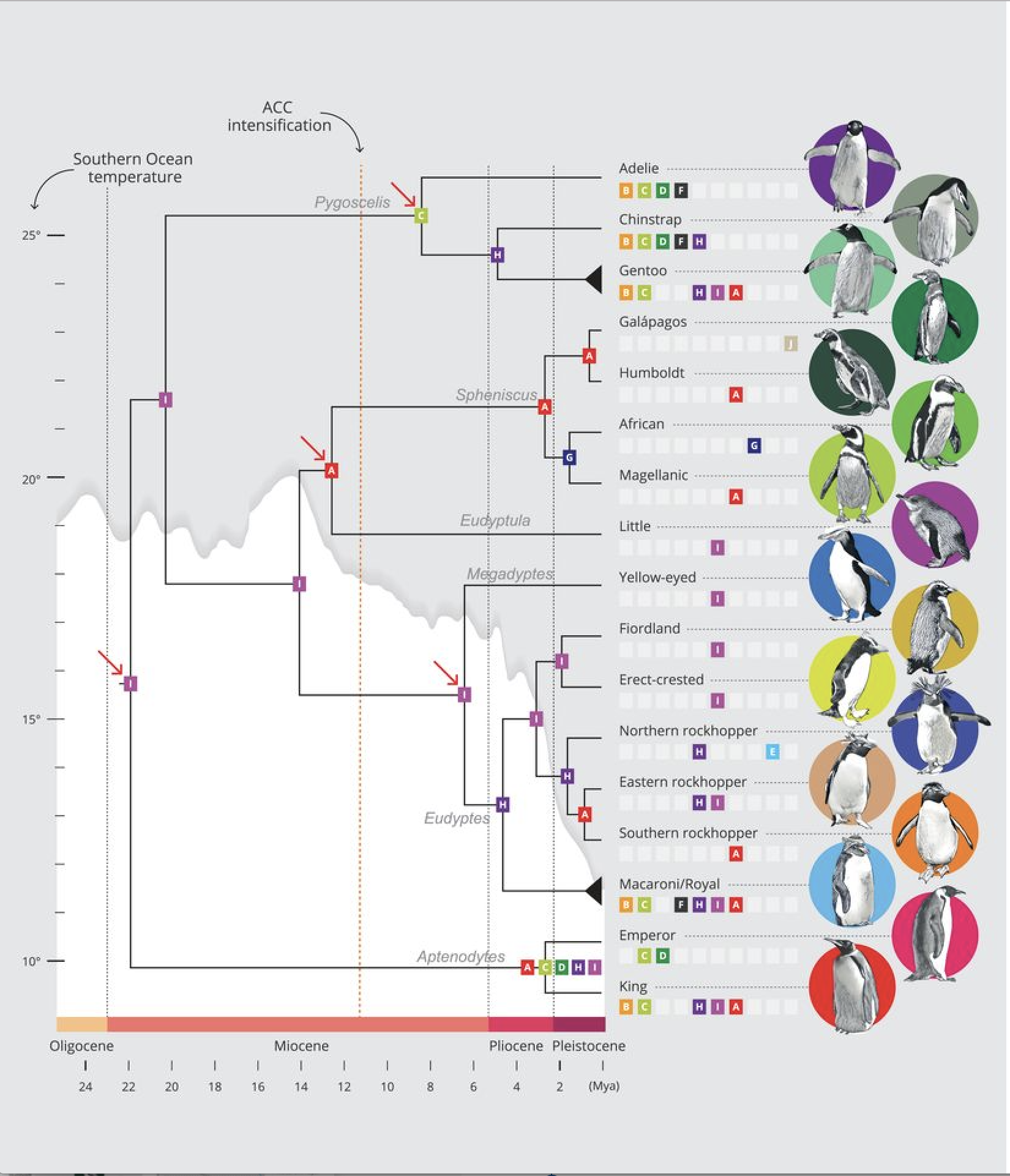 Using some assumptions and a complicated program, the authors could use the phylogeny to estimate the geographic range of the ancestral species as well as the ranges of ancestors within the phylogeny. Those are indicated with the letters A through I in the figure above.

The procedure is complicated, but it’s done the way evolutionists estimate ancestral traits of species—assuming that ancestors pass traits down to their descendants. In this case “geographic range” is considered a trait of a species. For example, if two closely related but distinct species occupy geographic areas that are close together, one can assume that their joint ancestor lived in that general area as well. The figure below shows the geographic areas that correspond the the letters of existing penguins (under their names) as well as the ancestors of groups (letters at the branch points).

The range of the ancestral node is letter I, and you can see that corresponds to the coastal areas of Australia and New Zealand, which, the authors assume, is where the ancestral species that gave rise to all modern penguins lived. This is a big conclusion of the paper, but since there are numerous assumptions that go into the biogeographic model, and not a lot of fossil data, I would take that conclusion as very tentative. If it’s true, that means that penguins evolved in areas where the water temperature at the time was abut 9ºC (48° F), and then some descendants (e.g. kings and adelies) colonized colder waters, while others (e.g.. Galápagos and African penguins) colonized warmer waters.

The ancestor of king and emperor penguins presumably lived on the coast of South America or Antarctica (letters A and C); kings currently breed on subantarctic islands and emperors only in Antarctica. 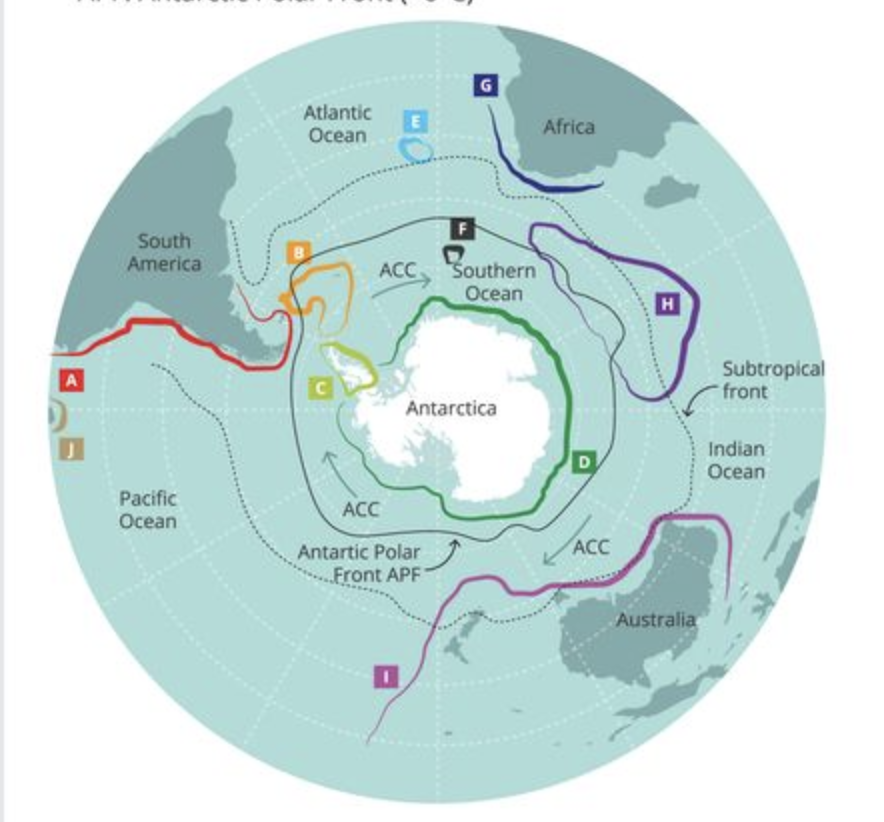 It’s possible, looking at the amount of genetic variation within whole genomes, to discern something about the demographic history (i.e., population sizes) of penguin species (again, there are some big assumptions here). You see below the plot of the “effective population size” (a figure that’s usually somewhat lower than the actual census size) for six species of penguins. Most show a strong drop in population size between about 70,000 and 40,000 years ago, which corresponds to the last glacial maximum (LGM, indicated by the vertical line). The authors say that the extreme cold during the LGM may have reduced the productivity of marine waters, and hence the abundance of fish and krill, the main diet of penguins.  That, in turn, is said to have reduced the population size of many penguin species: 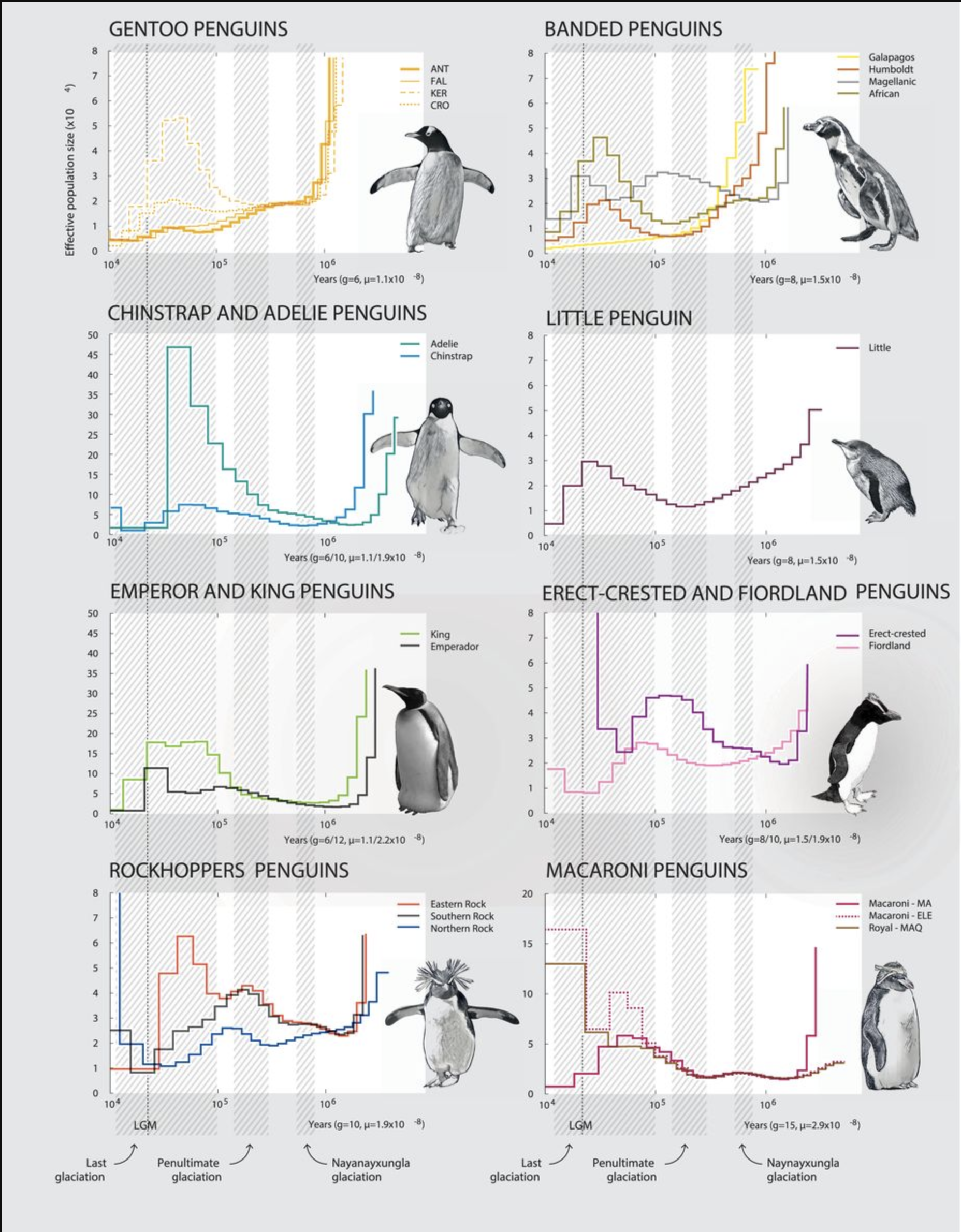 Finally, there are ways to detect genes in a lineage that may have been subject to natural selection. This is done by finding genes in which there is an elevated rate of amino acid substitutions, which change the structure of a protein, over the rate of presumed “neutral” changes in DNA, which don’t change protein structure.  The assumption here, which is a good one, is that a relatively faster rate of protein evolution was promoted by natural selection.

Here’s a diagram of some of the genes, and classes of genes, that, says the analysis, underwent (positive) natural selection, presumably conferring adaptation on individuals in the various species. The genes that apparently evolved adaptively are in pathways influencing thermoregulation, osmoregulation via renal function (fluid and salt balance), blood pressure regulation (helps conserve oxygen and maintain core body temperatures), and oxygenation (important in deep diving). Some of the genes are named in the diagram below. Again, these genes are identified as candidates for adaptation only from their pattern of DNA substitution in the tree, and we don’t know for sure whether the changes really were adaptive, much less how they affected the animal. 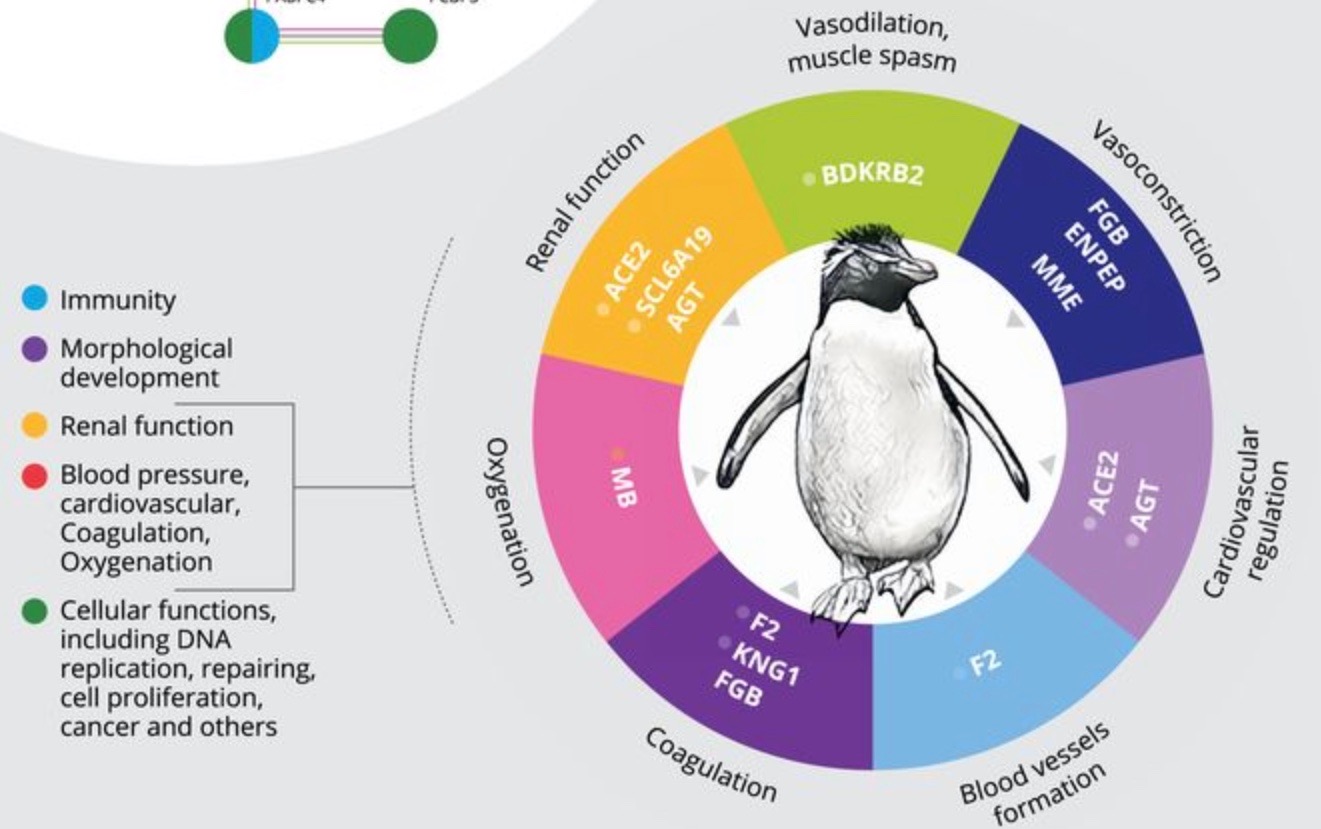 The authors conclude on a sad note, saying that it took penguins millions of years to adapt to new temperatures (including colonizing the relatively warm waters around the Galápagos Islands), and thus would likely be unable to adapt to the relatively fast temperature increases accompanying global warming. While one would think that a history of slow adaptation doesn’t say anything about how fast adaptation could proceed under more rapid environmental change, we already know that global warming is seriously damaging some populations of penguins. The CNN report quotes the first author of the paper and describes some heartbreaking changes:

“Right now, changes in the climate and environment are going too fast for some species to respond to the climate change,” said Juliana Vianna, associate professor at the Pontifical Catholic University of Chile, in the UC Berkeley statement.

Some penguin colonies in the Antarctic have declined by more than 75% over the past 50 years, largely as a result of climate change.

In the Galapagos, penguin populations are declining as warm El Nino events — a weather phenomenon that sees warming of the eastern Pacific Ocean — happen more frequently and with greater severity. In Africa, warming waters off the southern coast have also caused penguin populations to drop drastically.

I’m lucky to have seen five species of penguins, including kings, on my trip to Antarctica last winter. It would break my heart if we humans, through our depredation of the environment, drove these magnificent products of evolution to extinction. They were here long before we were!