Like many scientific journals and societies, the journal Nature is getting woker, larding its pages with letters and articles that often indict science or STEM for “systemic racism”. One letter, which appeared in Nature three days ago, is of that ilk.

While it would be foolish to deny that there are bigots and racists working in science, as there are in all areas, it’s a different matter to indict the discipline itself (including my own field of evolutionary biology) for “systemic racism,” at least in present days. That implies, depending on whose definition of the term “systemic racism” you use, that the field either has formal or informal structures in place to impede the advancement of ethnic minorities. This used to be the case, of course, and, as we know, science (i.e., “received scientific wisdom”) once gave its imprimatur to unsubstantiated and racist areas like eugenics, racial hierarchies, and so on. Even Darwin, an abolitionist, made statements about non-white groups that would be rejected as racist today.

But things have changed in a big way as society has advanced morally, and now science departments and fields are desperately seeking to redress the balance by looking for graduate students and faculty from minority groups. There are scholarships and grants directed at those groups, and I can truthfully say that in my entire career in science, I’ve encountered only one individual with attitudes I’d consider racist (that person will remain unnamed). Yes, there’s a dearth of minorities in science compared to the general population, but I strongly doubt that you can ascribe that to racism at the level of colleges, graduate schools, or faculty. Part of that may be a matter of preferences, but I suspect the main issue is that the pipeline to science is, for minorities, constricted beginning at the elementary-school level. We simply don’t have many minority applicants for graduate-school or faculty positions, and those we have are usually “Hispanic,” a broad term that can even include privileged individuals from Spain who are “white” by any account.  If there’s any discipline that is trying hard to achieve equity, it’s science.

Thus I bridle when I hear science in general accused of “systemic racism”, either built into science or as a general attitude within science. Yes, there’s individual racism, and that can manifest itself as biased treatment, but letters like the one below seem a bit extreme (you can see the letter in situ by clicking on the screenshot): 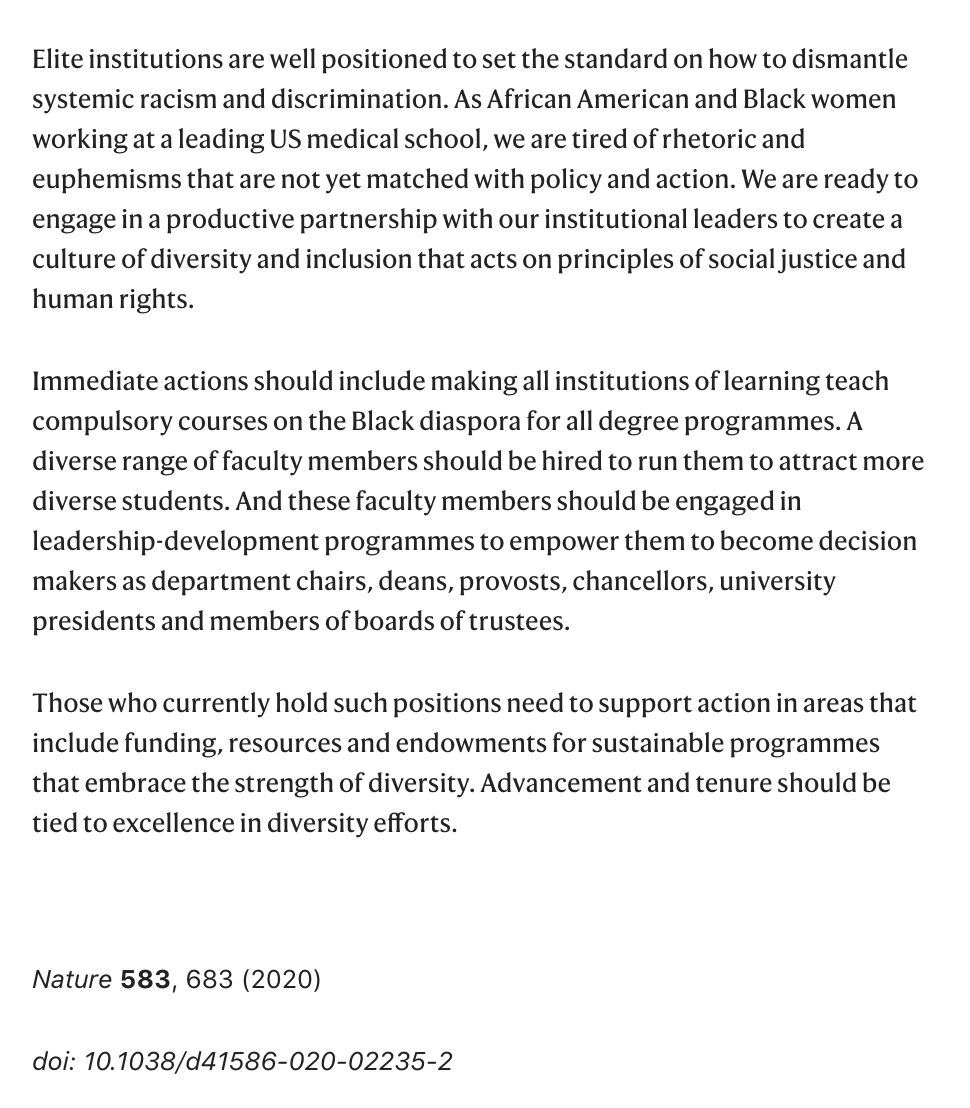 As I said, hiring and acceptance policies are already in place, as are scholarships and special grants and initiatives to promote ethnic diversity (see here and here for examples). But that is not enough for Gore-Felton et al.  They want not just equal opportunity, nor even equal outcome, but requiring “compulsory courses on the Black disapora” for every department in every elite institution of learning. This is a form of compulsory indoctrination. Further, the authors argue that no longer should advancement and tenure be based on merit (which of course always includes departmental and university service), but must be based on “excellence in diversity efforts.” This implies that if you’re not engaged in such efforts, you’re not going to get promotion and tenure.

This goes too far, and is a form of authoritarianism to which I objected this morning. Forced courses on the Black diaspora—and we know what these will be like—as well as denial of promotion or tenure if you don’t achieve excellence in fostering diversity (they of course mean racial diversity rather than any other kind of diversity) are ways of employing science for social engineering. Now scientists should participate ensuring that all groups, be they based on ethnicity or sex, have equal opportunity for entry and are treated like everyone else in graduate school and as faculty, but this is not what these initiatives are doing. They are insisting that scientists engage in political activities that have nothing to do with science, and then get marinated in ideologies that have nothing to do with science.

The piece above is a letter, not an official statement by Nature, but believe me, official statements resembling the one above are not only already in place in some science departments, but more are on the way. And it’s a sign of the times that Nature took these bizarre suggestions seriously enough to publish them.