Honey’s brood is largely gone: the other day we were down to her (she’s molting and can’t fly), one offspring, and two itinerant hens. But lately, ducks have been returning, and judging by their behavior (grouping together and following Honey), up to five or six of them might be her offspring. We also harbor between 2 and 5 itinerant mallard hens, who don’t get along with Honey’s brood, so there’s a lot of chasing and non-hurtful aggression. I feed everyone as I can’t single out just Honey for food (she won’t eat much now, anyway.)

On the Dorothy front, her six babies are growing, with feathers coming in fast. They’re now in the awkward teenage stage, but are still adorable. Dorothy has proved to be a good mom in the end, protecting her brood, rescuing any stray ducklings who start peeping for mom, and chasing away all other ducks save Honey (who’s still the alpha female). Everyone is happy and well fed.

Today we’ll show the last videos of Honey’s full brood and some photos of Dorothy’s brood as they enter duck puberty.

The first video is from June 18, when Honey’s brood was about six weeks old. They were going to fly within a week, but only short hops at first. Here they are foraging.

What a big group she raised! (Remember, half of them were originally Dorothy’s brood.)

My beloved hen Honey, whom I’d like to band with a gold engagement band. . . Note that she’s lost her flight feathers; this photo was taken on July 8 when all of her offspring were able to fly. Mother mallards molt after their babies fly: it’s a good time to change feathers since there’s less need to protect your babies. All mallards molt once a year because their feathers wear out from flying. 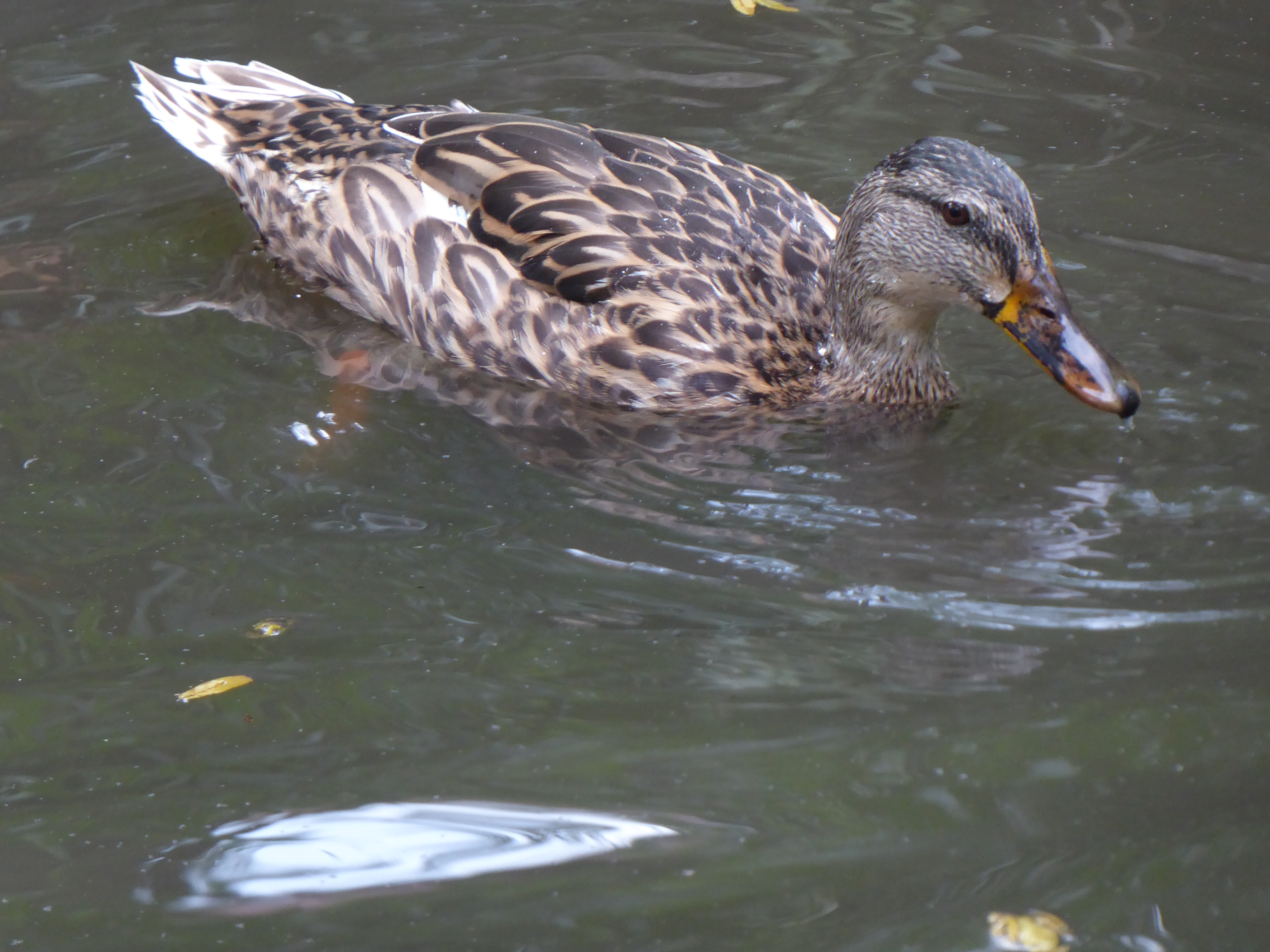 By June 18, Honey’s mixed brood were beginning to exercise their wings quite often. When walking around on the sidewalk, they’d gain extra propulsion by flapping. At the end of this short video a hearty baby does a Big Flap.

By July 13, just a week ago, about half of Honey’s brood had flown away, and the remaining ones practiced flying in the afternoons. They seem to get very frisky after meals.

Onto Dorothy’s brood, the object of most visitors’ interest in the pond. Her babies were not only cute (as are all ducklings), but people are intrigued and saddened at the story of how Honey purloined Dorothy’s babies, but then gladdened when they hear that Dorothy re-nested and had her own “starter family” of seven (now six). I’m so glad that Honey tolerated them, giving Dorothy had the experience of bringing up her own brood.

Here are two typical poses, with Dorothy and her brood resting on the bank. She watches them like a hawk (see below), chasing off any stray adults who come near. The ducklings like to stay together in a pile. 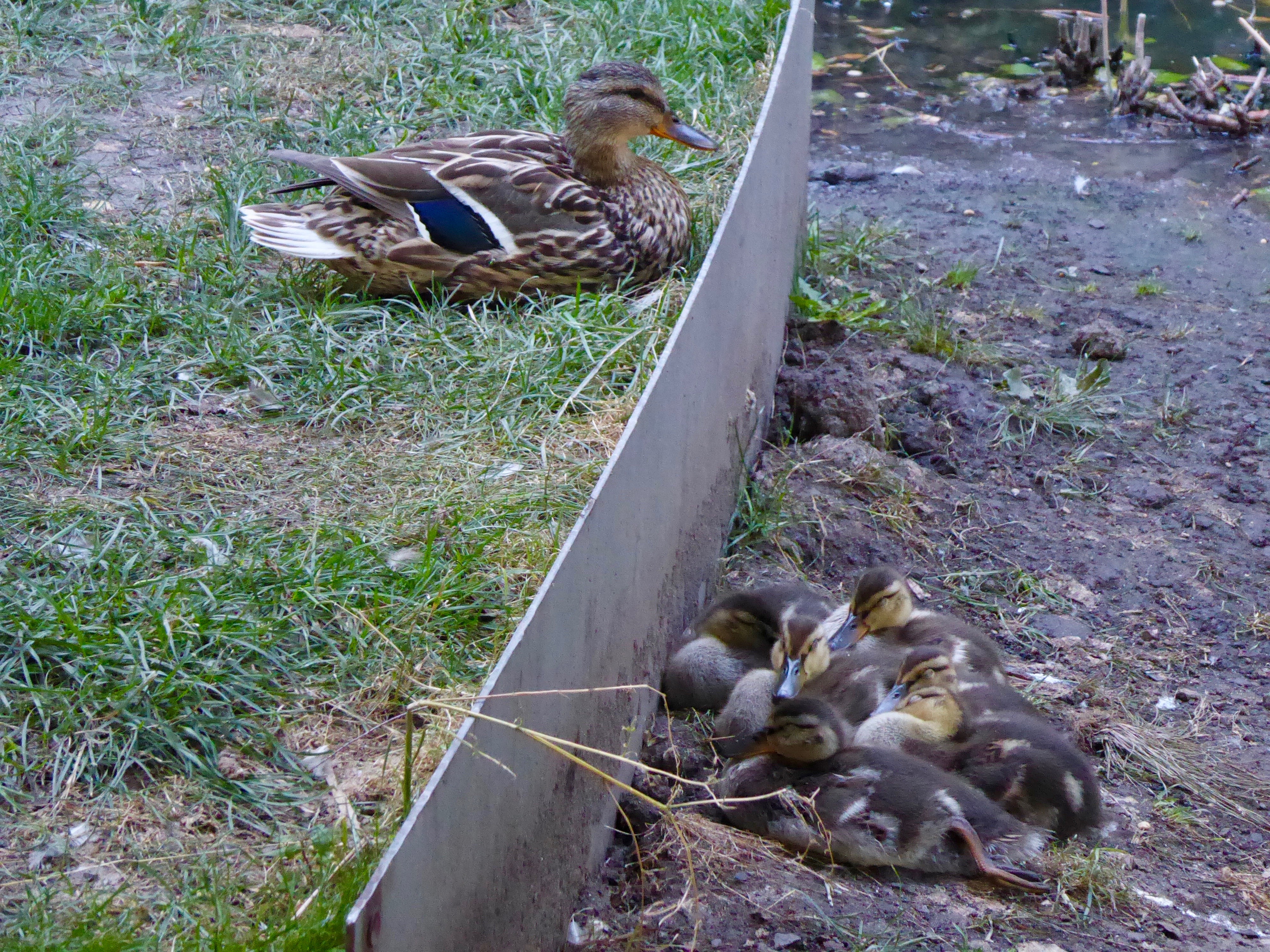 This picture was taken about three days ago; note that the ducklings have developed rather extensive feathers on their shoulders, wings and tail. Within a week they should be fully feathered. 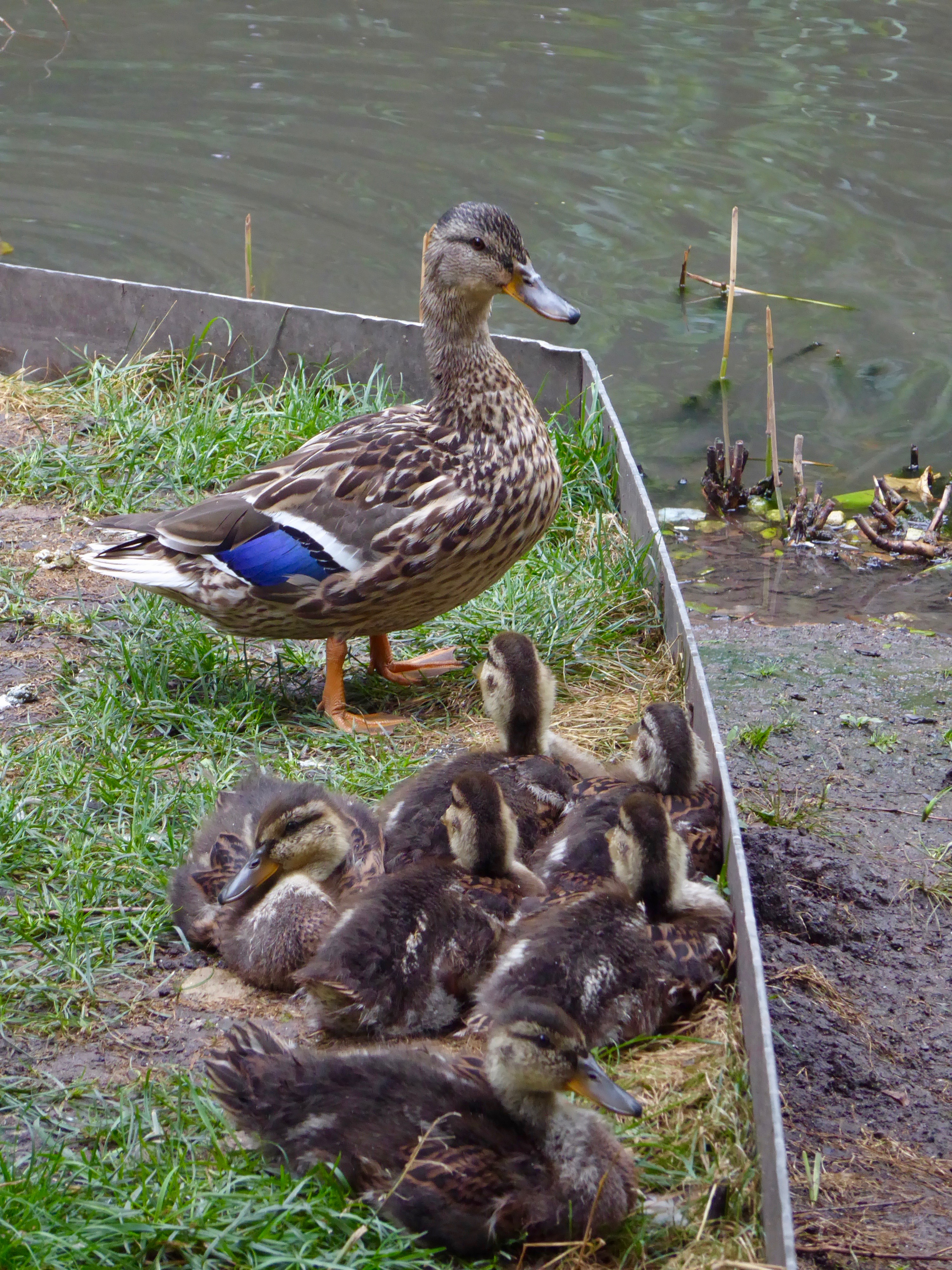 We’re always wary of the family of Cooper’s Hawks (Accipiter cooperii) that lives nearby. There are five of them: two parents and three babies. But they seem to ignore the ducks, even though sometimes the hawks fly right overhead (or even roost by the pond), emitting unearthly shrieks.  Occasionally this freaks out the ducks, which utter an alarm quack and then all freeze in place.  I believe the hawks realize that they can’t take the ducklings. At least I hope not!

Here are two views of what I think is one of the parent hawks; this was taken yesterday. 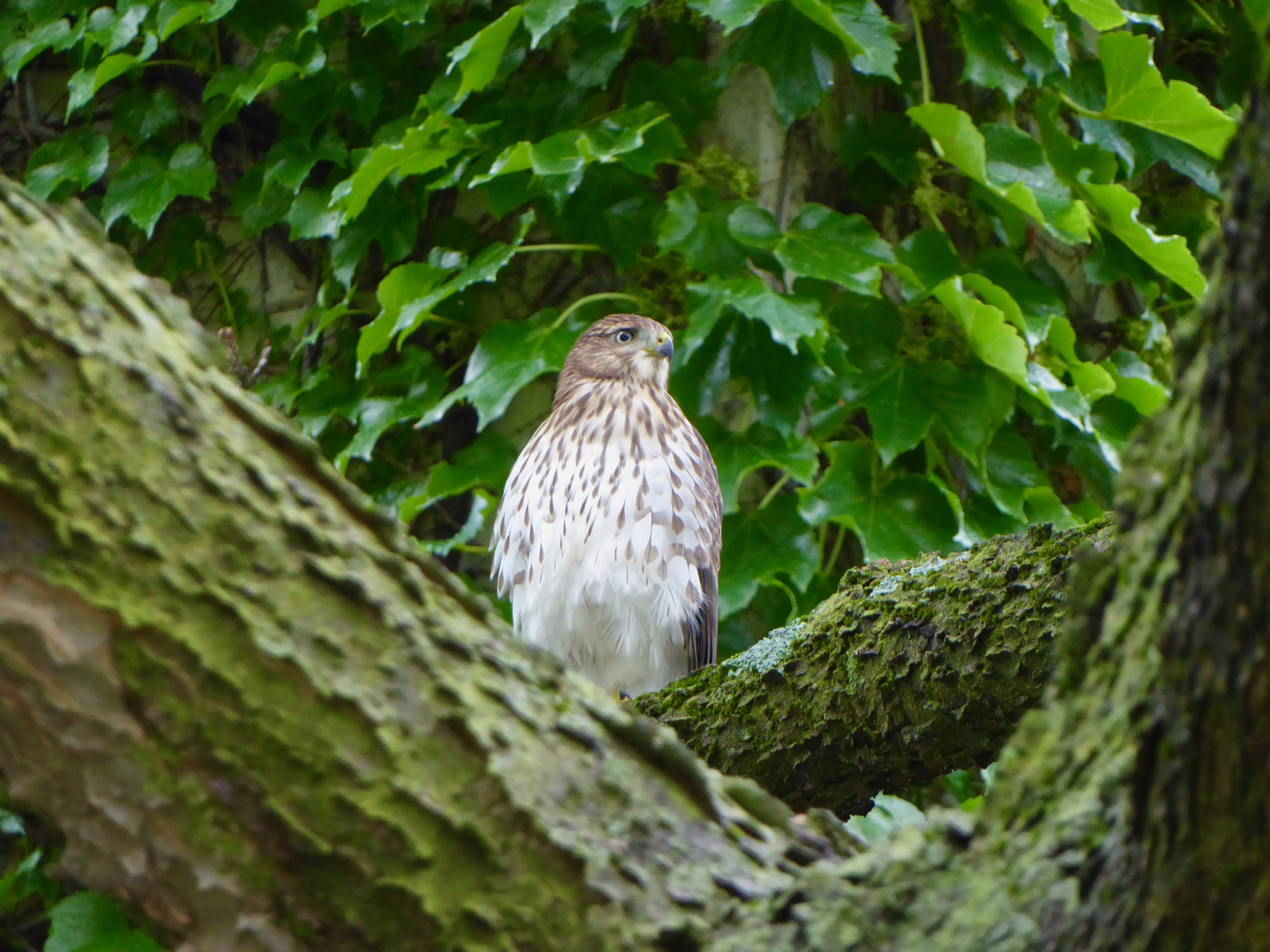 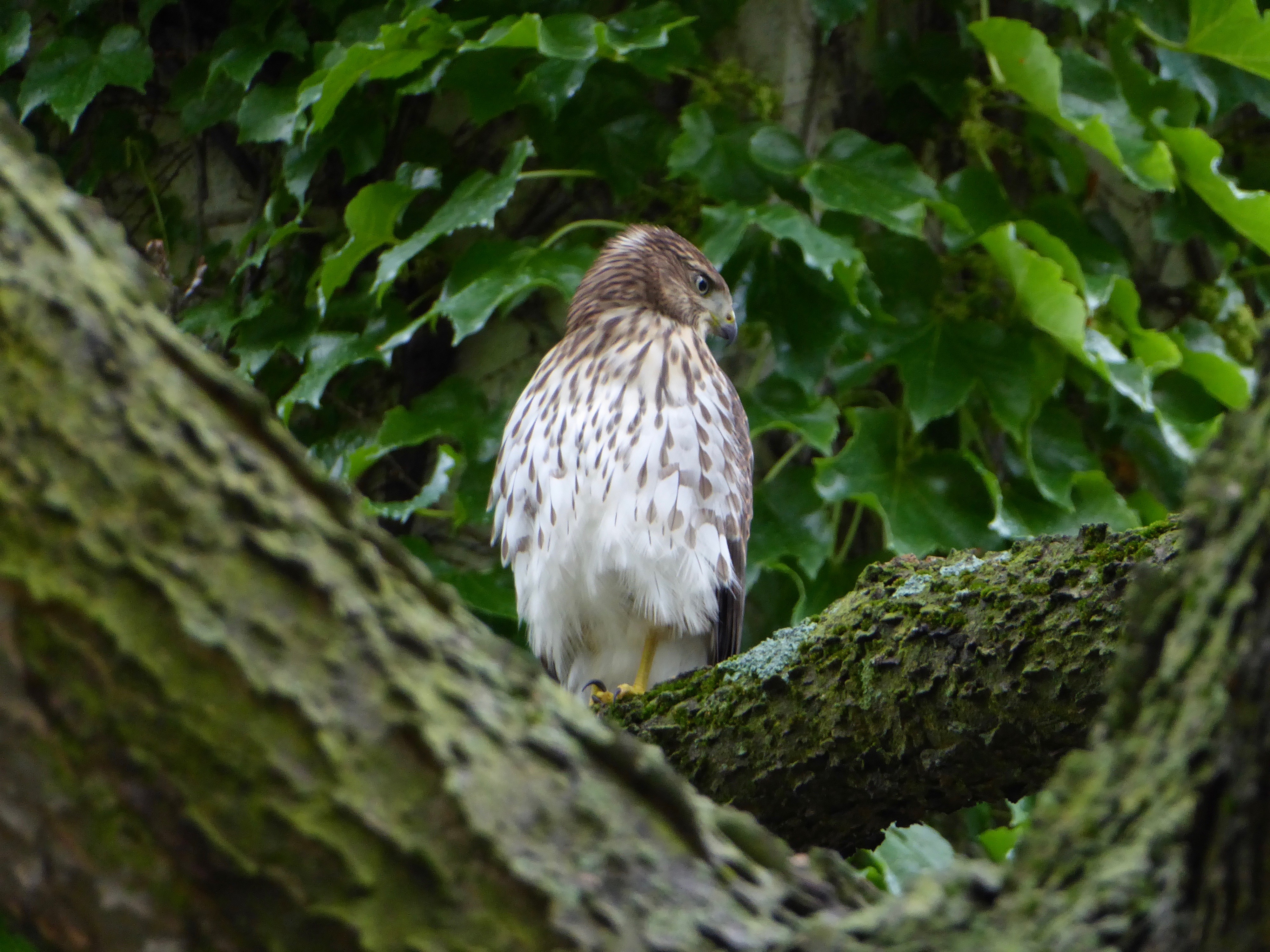