Planthoppers are in the order Hemiptera—the “true bugs”—along with cicadas and aphids, and are in the suborder Auchenorrhyncha. I’ve written about them before: they have all kinds of bizarre appearances that sometimes defy explanation (e.g., these ones).  In 2012 I wrote a report about a strange planthopper (Formiscurra indicus) that mimicked an ant, but the kicker was that the mimicry was described as being limited to one sex: the males. The females looked pretty much like “normal” planthoppers.

Sex-limited mimicry is known in some species, like butterflies, and I discuss it in my 2012 post, but there are reasonable (though untested) explanations for it. Some butterflies, for instance, have mimicry limited to females, with females of a single species varying in appearance across their range to mimic the local distasteful species (“Batesian mimicry“), but males look the same everywhere. That’s usually explained by sexual selection: females have a hardwired search image for males of their species, and while the females may change appearance based on local selection pressures to resemble distasteful “model” species, the males are prevented from doing so because they’d lose more in sexual attractiveness than they’d gain in protection from predation.

That 2012 article appeared in the Guardian (the report has disappeared) but there were no scientific papers describing it. Now, after seven years, one has finally showed up, in the Czech journal Acta Entomologica Musei Nationalis Pragae. Click on the screenshot below to see it and get a free pdf; the reference is at the bottom.

There are actually two species mentioned in this paper: Formiscurra atlas, found in Ethiopia, which was wrongly named in the Guardian report as Formiscurra indicus.  (The latter species, from India, had already been named in 2011.)  In the present paper, published in January of this year, the author (who co-wrote the 2011 paper) formally describes and names Formiscurra atlas, goes into great detail about its unusual morphology, and mention, though not in detail, the fact that in this species only the males are mimics—mimics of ants, or “myrmecomorphs”.

We can ignore the morphological details save that the species, in one sex only, is a mimic.  Here are pictures of a male and female. Fig 1 and 2 show the male, side and dorsal (top) view, respectively, while 3 and 4 show the female. The male has a round protuberance on its head (see the eyes behind it) that makes it look more antlike. The curious thing to me is that, according to the authors, they say that this ball-shaped protuberance evolved to resemble an ant’s abdomen, while to me, and in the pictures of its relative below, it looks like an ant’s head, while the male planthopper’s abdomen has evolved to resemble an ant’s abdomen. I’m not sure whether this is a mistake, but it’s at least clear that one sex but not the other has evolved to resemble an ant.

In Figs. 3 and 4 you see the female of the species, pretty “normal” for a planthopper. She does have a small cylindrical protuberance on her head that may be a vestigial remnant of the larger protuberance in males.

The authors, however, don’t say how they know that these are two sexes of the same species. DNA would tell, but no molecular analyses are described. 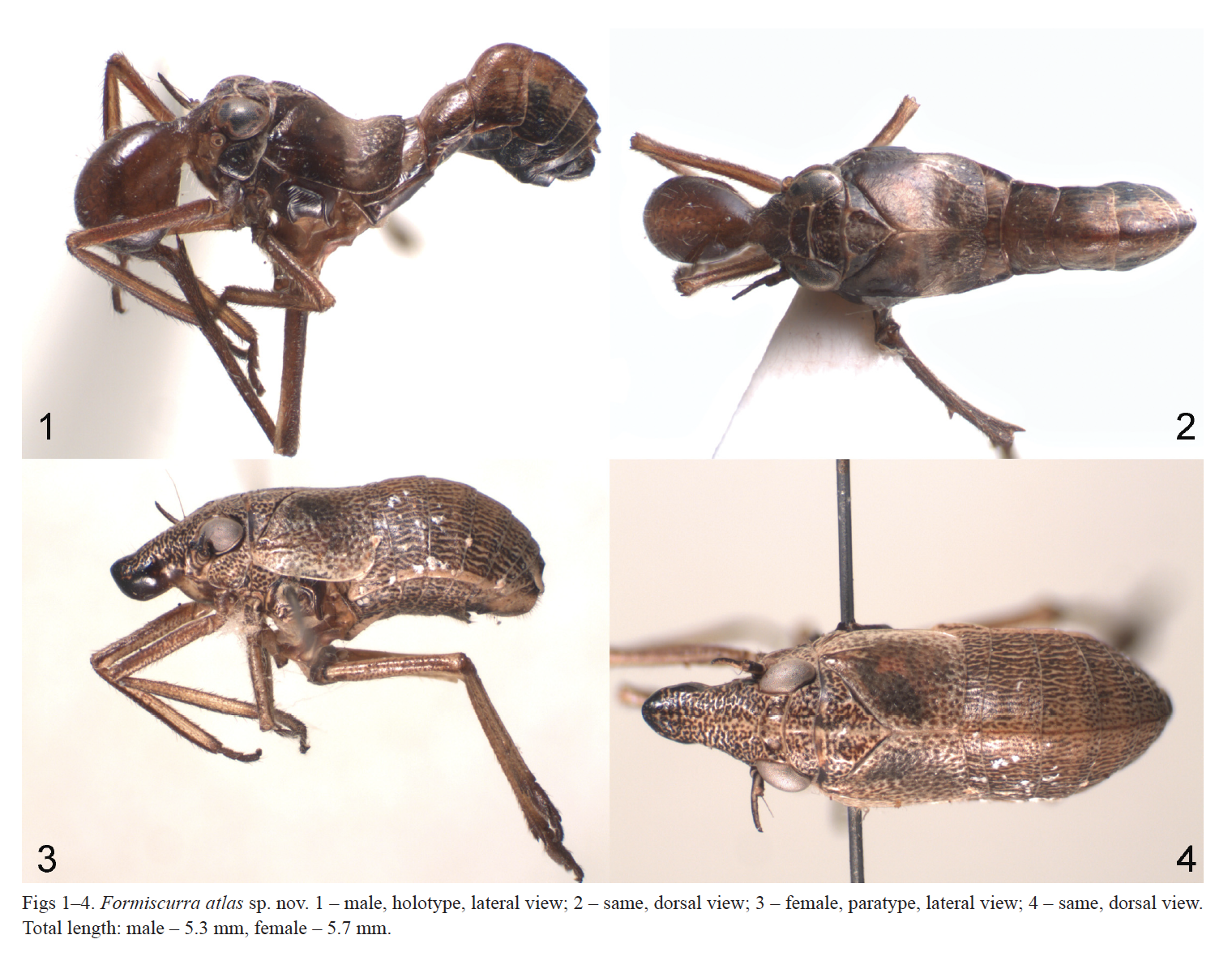 The authors also provide a photograph of a live specimen of the relative F. indicus, which is remarkably antlike, though I still say that in the first picture below (from the paper), as well as the second (from Wikipedia), the head protuberance is “supposed” to resemble the head rather than the abdomen of the ant: 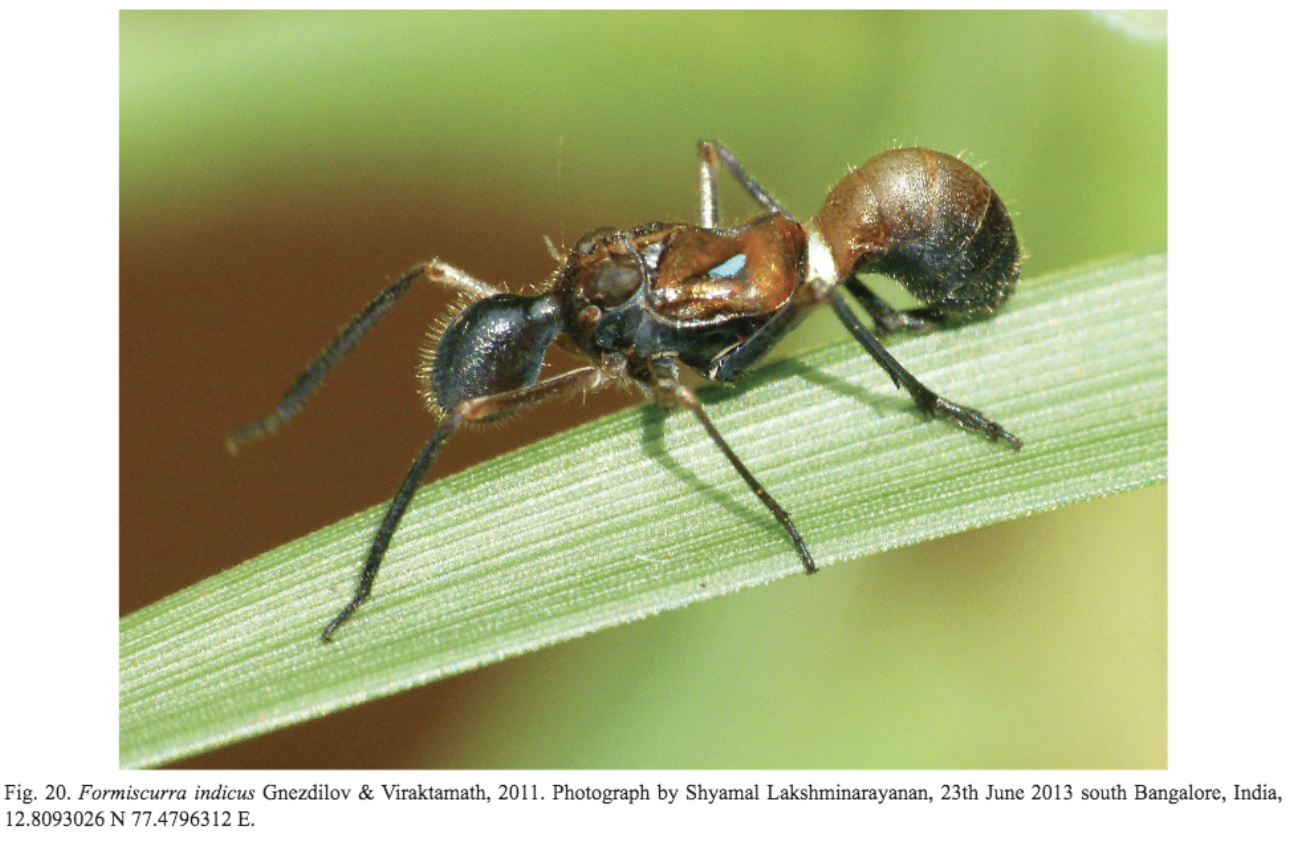 There remains only one thing to consider: why are only the males ant mimics? We know the benefits of ant mimicry, which I described in my earlier post:

Why mimic ants?  Ant mimicry is common in many diverse groups; in fact, Wikipedia has an article on it.  There could be several explanations for why the planthopper is such a mimic.  The mimicry could be aposematic, that is, the ants that are being mimicked are poisonous and distasteful, and predators have learned to avoid them.  By mistaking the leafhopper for an ant, the hoppers gain respite from being eaten, an obvious selective advantage.  Alternatively, the leafhopper could live in an ant colony and gain advantages that way, including protection by being in a group or getting access to the ants’ food. I find this less plausible since ants are good at sniffing out intruders.  And there are undoubtedly other possible reasons for mimicry.

I still think that the advantage of mimicry here is “Batesian”: that is, many ants are distasteful to predators like birds and lizards, as ants are full of poisons and other distasteful or toxic compounds, and very few species have them as a steady diet. If you’ve learned to avoid an ant, then a reproductive advantage accrues to any planthopper (planthoppers are tasty because they feed on sap and vegetation) that looks more like an avoided ant species. And there’s no evidence that these planthoppers are associated with ant colonies.

But on to the burning question: why is mimicry limited to one sex? If the mimics were females and the males were non-mimetic, we might explain it as we do in butterflies: males are constrained not to evolve because females retain the ancestral preference for how a mate “should” look. But in this case the mimics are the males and the females presumably didn’t evolve that much.  I don’t even want to speculate here (nor does author Gnezdilov), except to say that I’d like better evidence that these are indeed two sexes of the same species. Maybe I’ve missed earlier data on that.