The Andean Condor (Vultur gryphus) is a bird with one of the longest wingspans in the world—about 3.3 meters, or 10 feet 10 inches. Their mean weight is 11.3 kg (25 lb), with males weighing about a kg more than females. Wikipedia notes that its wingspan is “exceeded only by the wingspans of four seabirds and water birds—the roughly 3.5 m (11 ft 6 in) maximum of the wandering albatross, southern royal albatross, great white pelican and Dalmatian pelican”.

The condor is a denizen of the Andes and a carrion eater, now favoring large dead animals like cows and cattle, though before humans arrived it certainly feasted on the carcasses of native herbivores like guanacos.

A new paper in PNAS (see below) gives data obtained by affixing electronic devices to eight condors, devices that recorded their altitude, whether they flapped their wings (measured by an accelerometer), and how far they traveled using an included GPS. The results are quite amazing: they hardly every flap their wings except when taking off. But I am getting ahead of myself. First, have a look at the soaring behavior of this bird in a 2½-minute video. You can see one desultory wing flap 36 seconds in, and another at 2:20. That’s it.

You can read the PNAS paper for free by clicking on the screenshot below; the pdf is here, and full reference at bottom.

And, at The Conversation, one of the authors, Emily Shepard, describes the study in layperson’s terms (click on screenshot).

The authors caught juvenile condors by luring them down with sheep carcasses, and than affixing clever electronic boxes to the birds, boxes that were designed to fall off after a few days when they were roosting. The data collected was so copious—320 pieces per second, that they couldn’t record it in real time, but had to recover the boxes from the roosting sites and download the data that way. 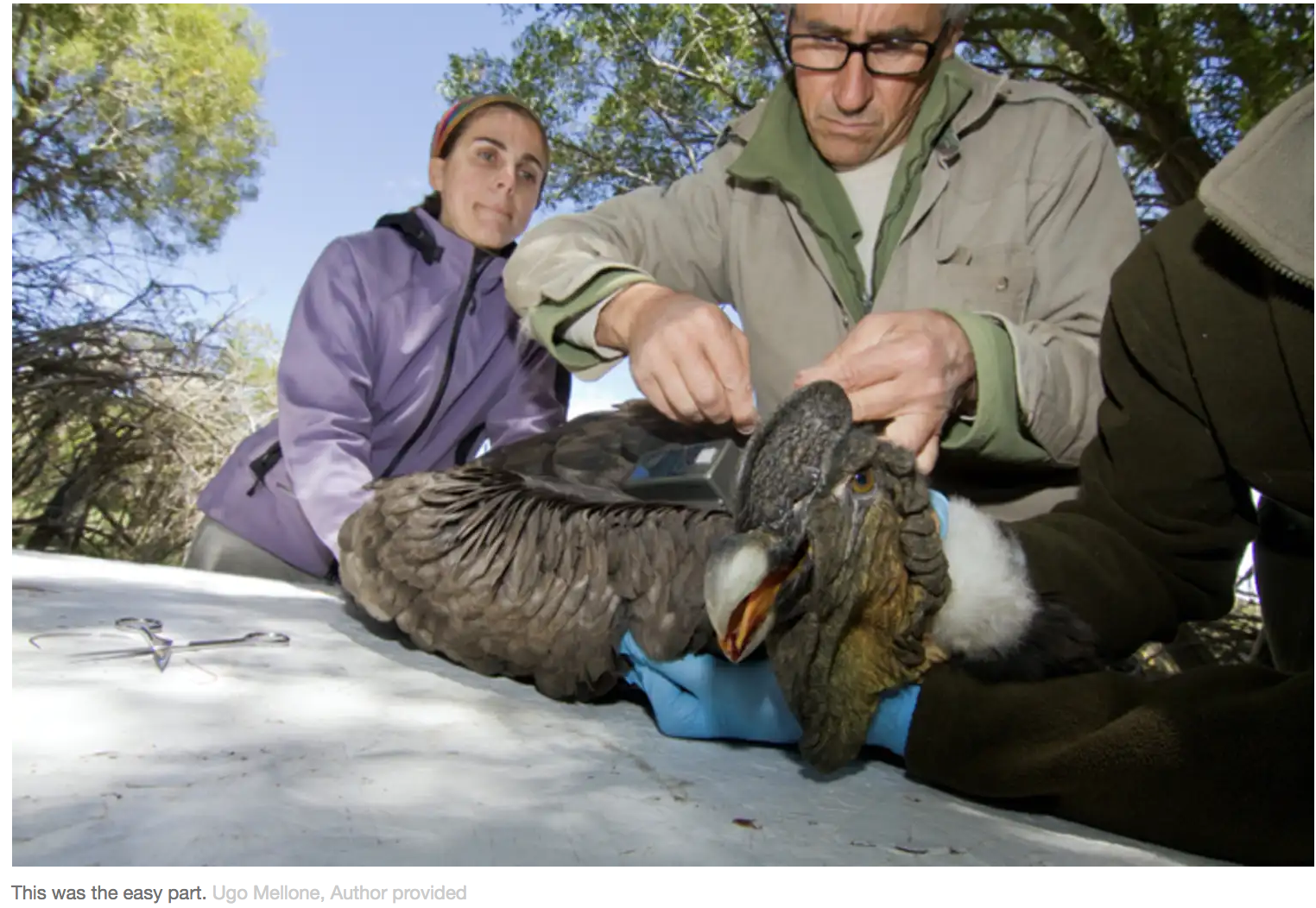 And retrieval of the data box: 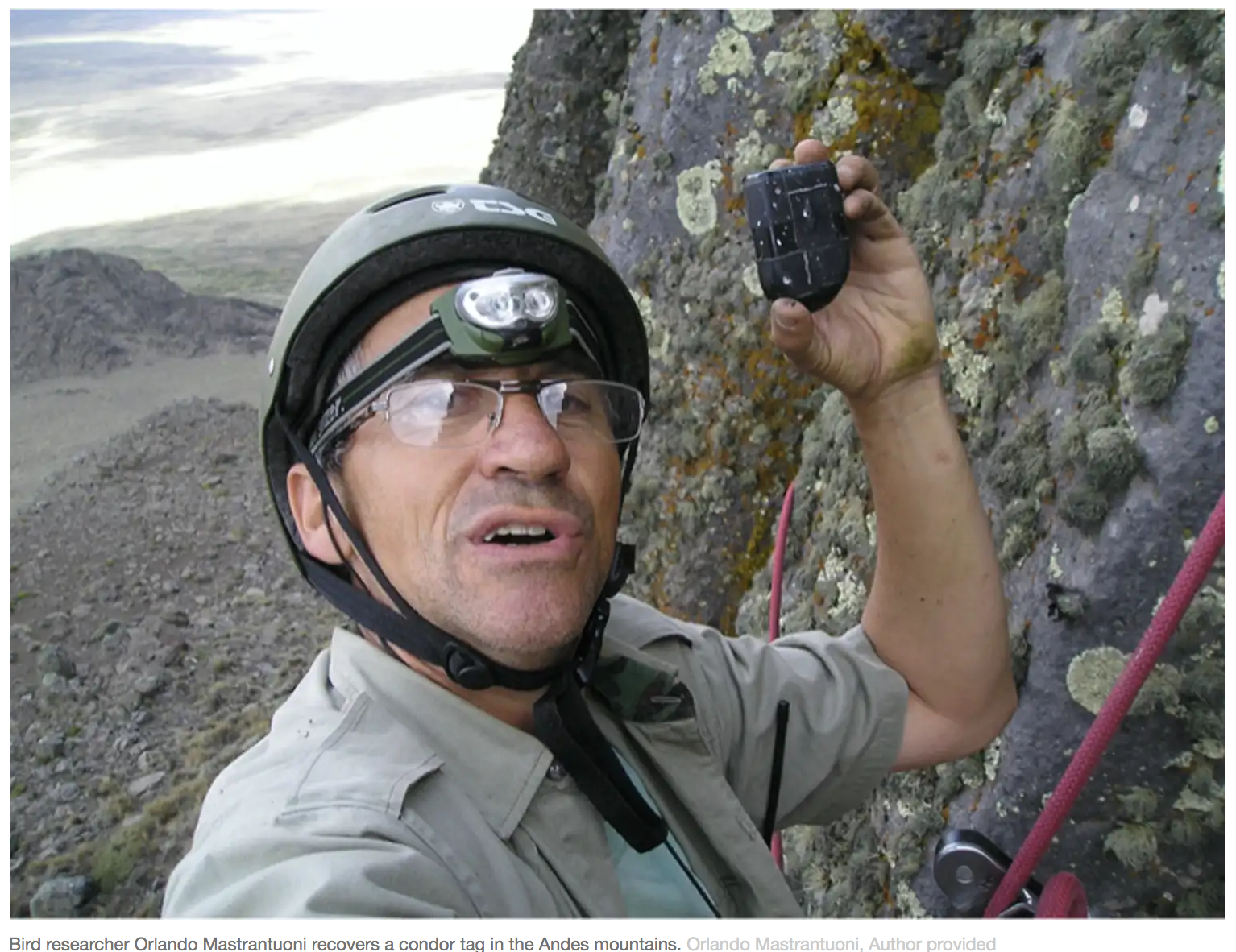 The results are unsurprising in one sense, as they found (and we already knew) that these birds soar by using thermals—warm rising air—as well as winds blown upwards when they contact mountain peaks (updrafts).  But the surprising thing was how rarely the condors flapped when they were on their foraging flights.

In 235 hours of flight time recorded (1.3 billion data points!), the authors found that condors spend about three hours of the day soaring between roosting and feeding sites, looking for livestock carcasses.  The intriguing result was how little wing flapping there was: only about 1% of that time aloft was spent flapping.  One striking bit of data came from a single bird who didn’t flap its wings at all for 317 minutes (5 hours, 17 minutes), and yet covered 172 km (107 miles).

This is the lowest amount of flapping of any free-ranging bird, and of course this reduces the energy needed to keep such a large bird aloft. In toto, researchers calculated that 21% of the daily costs of flight were spent in flapping while aloft, while 75% of the costs were involved in takeoff, each such takeoff using the energy equivalent of 3.3 minutes of flapping. Takeoff is onerous, time-consuming, and dangerous, as, say the authors, condors are susceptible to predation then (presumably by large cats like pumas).

Here’s a 25-minute readout from a single soaring condor giving three bits of information: the altitude (top), the heading (middle), and whether they were flapping (“acc” or acceleration), bottom. There appear to have been seven or eight flaps.

The extremely low rate of flapping, using only about 1% of its time aloft, and the bird’s use of thermals and updrafts, explains how such a heavy bird can maintain its lifestyle without expending excessive energy. And the high costs of takeoff explain (along with predation) why these birds roost and nest on high mountain ledges, where they don’t really have to take off, but can simply fall off the ledge and begin soaring.

What are the implications of this work? The authors mention an extinct terrestrial bird, Argentavis magnificens, which apparently weighed about 72 kg—more than six times heavier than the Andean condor. (It’s know from a single humerus, or upper arm bone, which is about as long as a human’s.) Here’s a photo of its size relative to humans and Andean condors:

Wikipedia gives details, and adds that there’s now a fossil species with an even longer wingspan one that would extend to the right side of the figure above!:

Argentavis wingspan estimates varied widely depending on the method used for scaling, i.e. regression analyses or comparisons with the California condor. At one time, wingspans have been published for the species up to 7.5 to 8 m (24 ft 7 in to 26 ft 3 in) but more recent estimates put the wingspan more likely in the range of 5.09 to 6.5 m (16 ft 8 in to 21 ft 4 in). Whether this span could have reached 7 m (23 ft 0 in) appears uncertain per modern authorities. At the time of description, Argentavis was the largest winged bird known to exist but is now known to have been exceeded by another extinct species, Pelagornis sandersi, was described in 2014 as having a typical wingspan of 7 to 7.4 m (23 ft 0 in to 24 ft 3 in). Argentavis had an estimated height when standing on the ground that was roughly equivalent to that of a person, at 1.5 to 1.8 m (4 ft 11 in to 5 ft 11 in), furthermore its total length (from bill tip to tail tip) was approximately 3.5 m (11 ft 6 in).

Argentavis was certainly airborne, and the present work on condors shows that it probably remained aloft by soaring. That, in turn, would imply that it was a scavenger and not a predator, as the latter lifestyle would imply a much more active flight that would be impossible in such a bird. I’ve seen an Andean condor once, in Argentina, and even though it was way up in the sky, it was still impressive. Imagine what it would look like to see an Argentavis magnificens soar past!

20 thoughts on “The Andean condor: a bird that hardly ever flaps its wings”