Last November, when I was on a ship off Antarctica, I posted about a bill in the Ohio Legislature, now called the “Student Religious Liberties Act,” that, critics fear, would expand the role of religion in the public schools. At that time the bill had passed the Ohio House over the objections of Democrats.  Now, according to the news site Cleveland.com, the bill has passed the Ohio Senate unanimously, by a vote of 32-0, and is on the way to the governor for his signature. 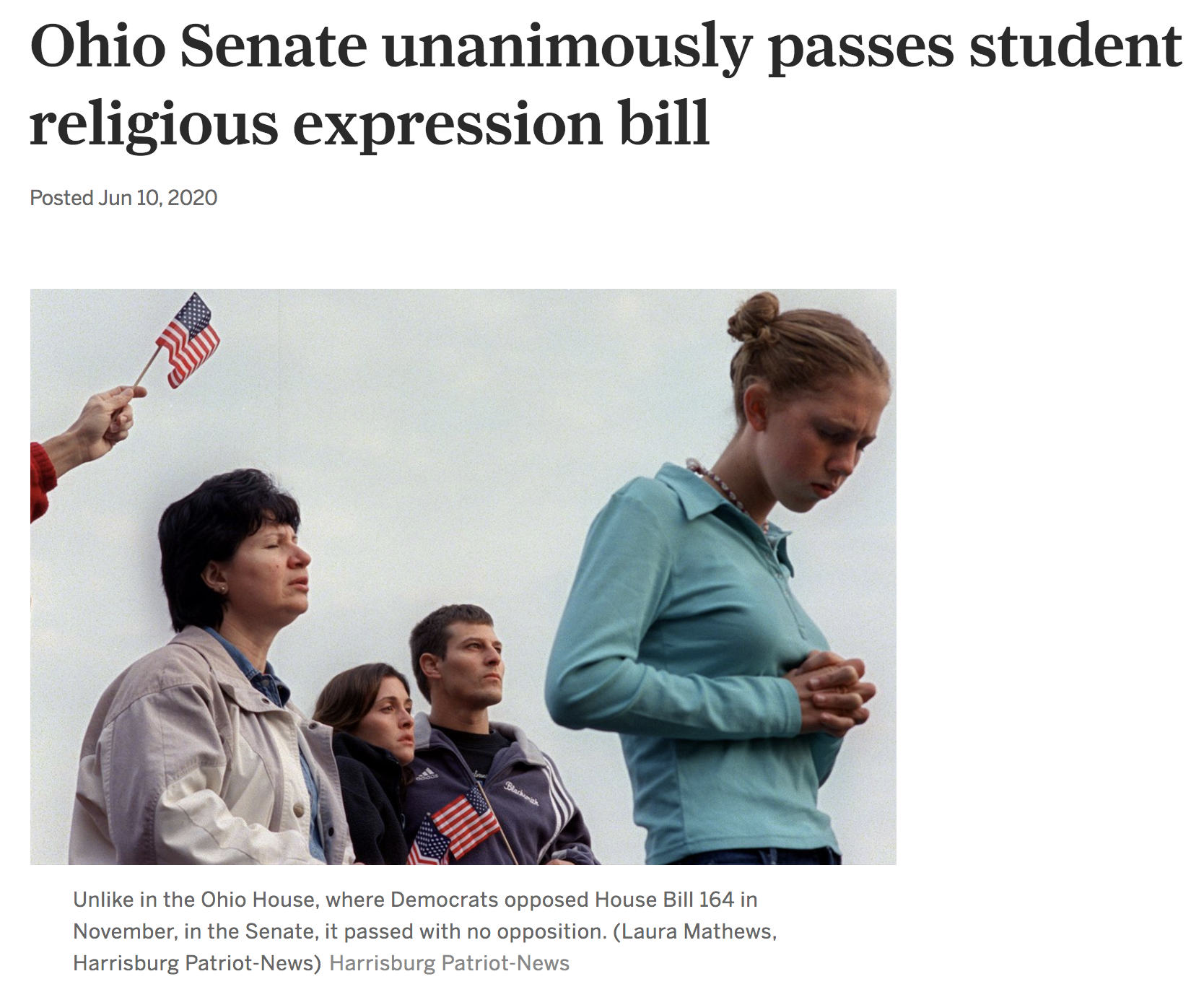 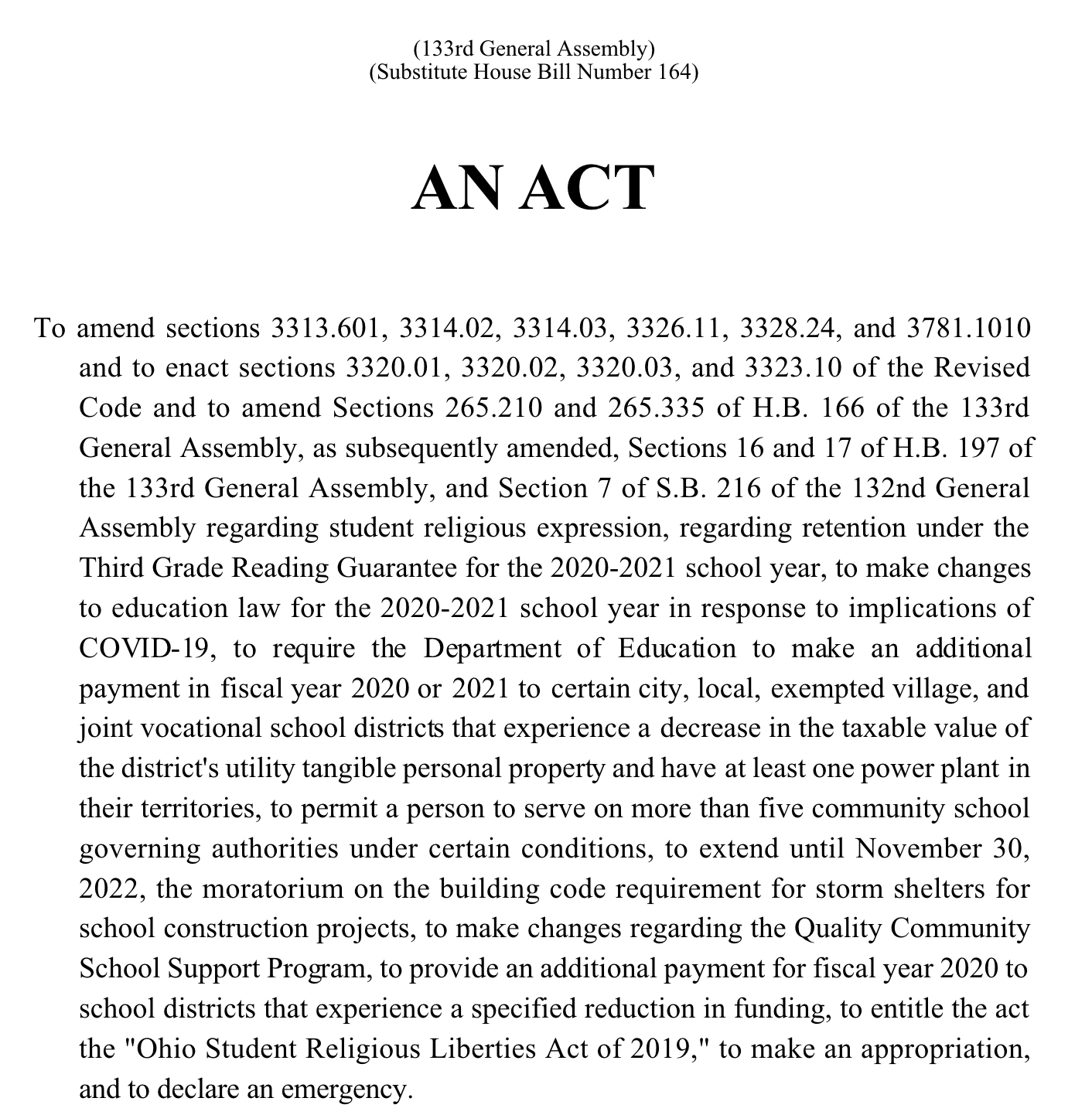 While my earlier post singled out four areas of concern, the one that most disturbed me was this one, which appears to have been adopted without any changes:

You don’t have to parse this closely to see the ambiguity. You are not to be penalized or rewarded by engaging in religious expression on assignments, but yet you’re supposed to be graded using “ordinary academic standards of substance and relevance.” How is that going to work.

The proponents of the bill, below, say that nothing will change, with one person using as an example that if someone draws a picture of Jesus in an art class, “They are not to be penalized on the religious content but on their skill as a painter.” The problem is, of course, that not all classes are art classes! (See below.)

The newspaper article at the top notes that ten other states have adopted similar legislation, and it’s worrisome that religious organizations were the ones lobbying for the bill.

My concerns remain the same as they were seven months ago, and so I’ll just repeat what I said then. My words are indented, and quotes are further indented:

The fourth bit—the subject of this post and the Ohio bill—is especially worrisome, because it allows students to give wrong answers if those wrong answers comport with their faith. That, too, is inimical to the public welfare, and to the duty of public education, in the service of religion. While the bill is said to be more “nuanced” than that, I don’t know how, and even the bill’s supporters aren’t sure.

Here’s what that bit says in the bill:

You can see the ambiguity here. On the one hand the code permits students to use religious expression to do homework or answer test questions, and to do so without penalty (or reward); on the other hand it says that assignments will be graded “using ordinary academic standards of substance and relevance.” That gives no guidelines about what to do when a student says that the Bible says that the Earth is 10,000 years old, or that all animals and plants were created within a day or two because that’s what Genesis says. This is a bill that’s simply begging for a lawsuit.

. . .Well, there’s plenty of chance for religious self-expression after school or in church. And there’s no excuse for impeding students’ education by giving them credit for religious answers that are wrong—or failing to tell them that they’re wrong, even if you don’t penalize them. If you want religious answers to be acceptable, have your kids home-schooled—or send them to religious schools.

But would the bill allow students to get credit for wrong answers that buttress their faith? It’s not clear, for that might depend on the results of later First-Amendment lawsuits. The Cleveland.com website says this:

I think Daniels is a bit off the mark here. Those “restrictions on students’ religious rights” are already prohibited by the First Amendment (first and third points above). So what’s new?

On the other hand, Daniels said that if a student submitted biology homework saying the earth is 10,000 years old, as some creationists believe, the teacher cannot dock points.

“Under HB 164, the answer is ‘no,’ as this legislation clearly states the instructor ‘shall not penalize or reward a student based on the religious content of a student’s work,” he said.

Amber Epling, a spokeswoman for Ohio House Democrats, said that in an analysis of the bill by the legislature’s nonpartisan staff, “they cannot be rewarded or penalized for the religious content in their assignments.”

She believes the bill could result in teachers accepting assignments that fly in the face of science.

But I think it’s more likely that teachers would avoid this whole issue by not asking questions that could lead to religiously-inspired answers. But that means no evolutionary biology at all, and not many biology teachers want to avoid teaching evolution, even in the American South. To deprive students of this wondrous (and true!) theory by catering to students’ faiths would be to do them a profound disservice. After all, is religion so different from other unsubstantiated faiths like Holocaust denialism? Does Scientology and its crazy claims about Xenu and thetans get “respected” too? That way lies madness.

And here’s some more madness. Sponsor Gintis says that the bill’s “nuances” prohibit students from getting credit for wrong but religiously-inspired answers, but then undermines what he said by asserting that Moses was a historical figure and you could get credit for writing about Moses as if he existed.

But Ginter, the bill’s sponsor, said that the student would get a lesser grade in a biology class for an evolution assignment. Even if the student doesn’t believe in evolutionary theory, the student must turn in work that accurately reflects what is taught.

“It will be graded using ordinary academic standards of using substance and relevance,” he said.

However, if students were assigned a report based on historic figures, they could turn in a paper on a historical figure, such as Moses or Mohammed, Ginter said.