I go back and forth on how we deal with famous people who had views that, while widespread in their time, would be rightly seen as odious were they expressed today. For example, there was hardly an Anglophone white man before the turn of the 20th century who wasn’t a racist or had some association with oppressing people of color.  These include Thomas Jefferson and George Washington, who kept slaves, Winston Churchill, who was a nativist and bigot, and Charles Darwin, who, although an abolitionist, clearly expressed views on the superiority of white people that would be excoriated today.

What do we do with statues of such people, or buildings named after them? I suppose my solution would be to take it on a case by case basis. For example, statues of Confederate generals put up after the war to celebrate white supremacy seem “problematic”. But we pull them down, as is happening recently to widespread acclaim, or do we give them “context” with explanatory plaques or “counter-statues” nearby? My views tend to be not to erase history, but, when that history is especially odious, to “contextualize” it. Or, as with the Nuremberg stadium where Hitler held his famous rallies, just let them go to seed. (I think they’ve done this in Sofia, Bulgaria with Soviet-era statues.)

Here are three cases in which I can see the problem, but don’t favor effacing history. This comes from my judgment that, on balance, the good done by these people outweighs what bad stuff stemmed from their views. In other words, a memorial serves not only a celebratory purpose, but a historical one. This puts me at odds with many of my fellow Leftists, but let me know your own take.

Thomas Jefferson statue. This article comes from Oregonlive.com (click on screenshot). Protestors pulled down a statue of Jefferson from an eponymous high school in Portland, Oregon: 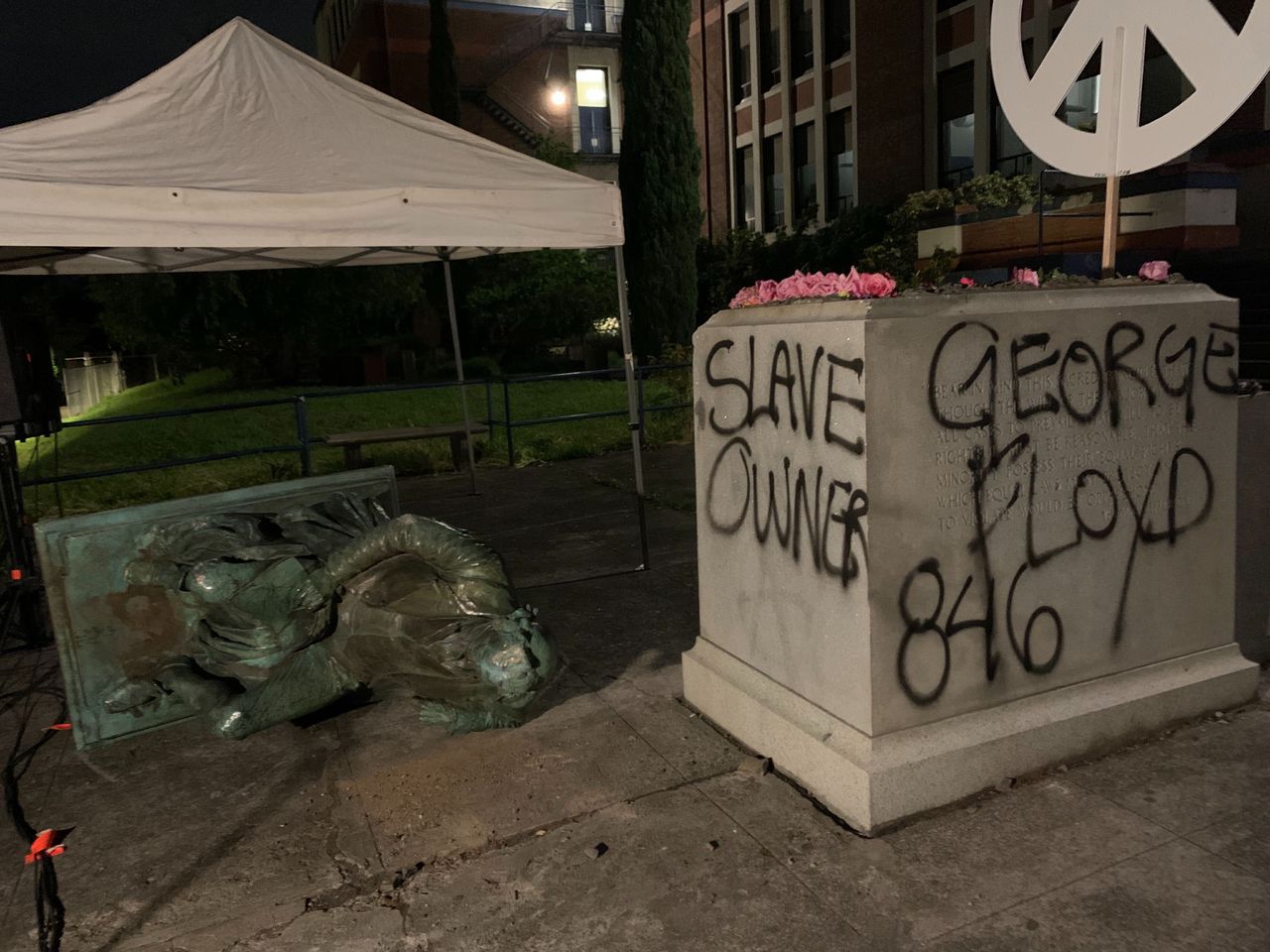 Earlier in the day, the statue’s pedestal had been defaced with graffiti that, among other things, identified Jefferson as a slave owner.

Jefferson, the author of the Declaration of Independence that proclaimed “that all men are created equal,” publicly decried slavery — even as he enslaved hundreds of people and profited from their forced labor.

It was unclear when the statue was taken down, but by 10 p.m. when dozens of protesters streamed back onto the football field at Jefferson High School, the statue was no longer standing.

The crowd cheered as an organizer announced: “There’s an interesting piece of history up here… Mr. Thomas is all beside himself.”

“We’re taking this city back,” the organizer said, “One school at a time. One racist statue at a time.”

Yes, Jefferson had slaves (and took one for a mistress), but he’s perhaps the most famous and accomplished of the founding fathers, author the Declaration of Independence, of the Virginia Constitution (which served as a model for the U.S. version), of the Virginia Statue for Religious Freedom (calling for the separation of church and state), the third President of the U.S., and the founder of the University of Virginia (for which he forbade a theology school).

Perhaps I’m soft on TJ because he went to The College of William and Mary, my alma mater (a statue of TJ at the College was defaced three years ago, as was a statue of James Monroe, also a slaveholder), but it seems to me that the good he did for our country outweighs his status as a slaveowner (which, as I understand, was always problematic for him). Are we then to further efface Jefferson from our history because he had slaves? If so, then also efface George Washington, who had hundreds of slaves. Shall we tear down the Jefferson Memorial and the Washington Monument? If not, and you think statues to Jefferson are racist, why not?

And if you want to “contextualize” this statue (doesn’t everybody know now about Jefferson, his slaves, and Sally Hemings?), how would you do it?

Abe Lincoln Statue. In Boston, a statue of Abraham Lincoln might be removed because it shows him towering over a kneeling slave, even though Lincoln was neither a slaveowner nor an advocate of slavery. After all, he did sign the Emancipation Proclamation and did not, contrary to the claims of the NYT’s 1619 Project, favor sending blacks back to Africa, the land of their ancestors.

The statue in Boston: 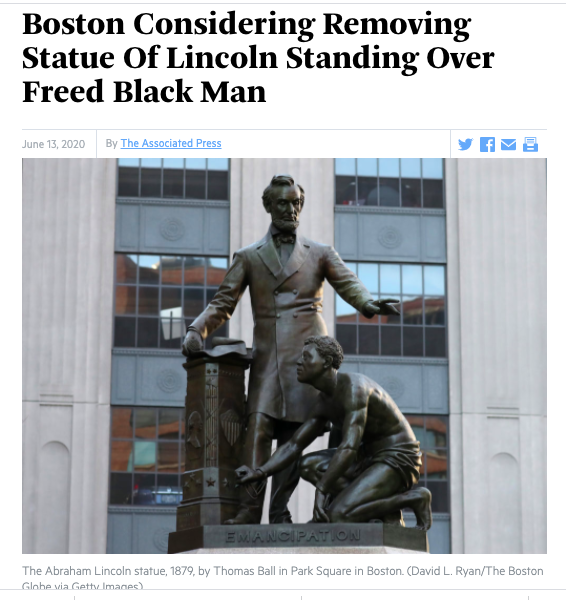 As WBUR News in Boston reports:

The statue in the city’s Park Square is a replica of the Emancipation Memorial in Washington and depicts Lincoln with one hand raised above a kneeling man with broken shackles on his wrists.

Get the editor’s can’t miss stories of the week, and tips for navigating life – and weekends – during the coronavirus outbreak. Sign up now.

The statue is meant to show Lincoln freeing the man from slavery, but a petition against the statue says it “instead represents us still beneath someone else.”

The petition was started by Tory Bullock, a Boston man who says the statue has long led him to ask, “If he’s free why is he still on his knees?” His call to remove the memorial had attracted nearly 6,000 signatures as of Saturday.

The Boston Globe reports that Mayor Marty Walsh is in favor of removing the statue and is interested in replacing it with something that recognizes equality. Walsh’s office said the administration is looking into the process required to make the change.

I have to say that, in a modern context, it’s a tad cringeworthy. However, the question “If he’s free why is he still on his knees?” might not be relevant if Lincoln is seen in the process of raising up those who were downtrodden. A statue made today wouldn’t—and shouldn’t—show a crouching black man, but are we to tear this down because it was made in 1876, not long after Lincoln died? If you think it should stay up but be contextualized, how would you contextualize it? At least we don’t have to tear down statues of Lincoln by himself, like the great marble sculpture in the Lincoln Memorial in Washington, D.C.

Winston Churchill Statue. Even though who admire Churchill, as I do, must admit that the man was flawed. He was a white supremacist who made rabidly bigoted comments about others. He was also a jingoist who favored the perpetuation of the British Empire. As Newsweek mentioned when discussing the government’s plans to perhaps remove the statue from its place in Parliament Square:

“Churchill was quite explicit that he did believe that white people were superior,” Prof Richard Toye, head of history at the University of Exeter, has said.

“He said he disliked Chinese people, he described Indians as a beastly people with a beastly religion, by which he meant Hinduism. He often described Africans as being sort-of childlike. He was certainly criticized during his own lifetime for having outdated, antiquated views on race.

“We know that he made very negative comments about Indians and blamed them really for the [Bengal famine in 1943], saying it was their fault for breeding like rabbits. But that’s not to say that he deliberately planned or engineered the famine or wanted to perpetuate deliberate genocide against Indians.”

Even his granddaughter, Emma Soames, accepted that Churchill’s views “particularly now are regarded as unacceptable but weren’t necessarily then” but “he was a powerful, complex man, with infinitely more good than bad in the ledger of his life.”

I would agree with that, but others might differ. After all, he did save Britain from being Nazified during WWII, and helped end the Hitler regime, which killed millions, forever. There’s no doubt that, at least for a time, he was one of the world’s great leaders.

His statue, however, is being defaced because he was deemed racist. 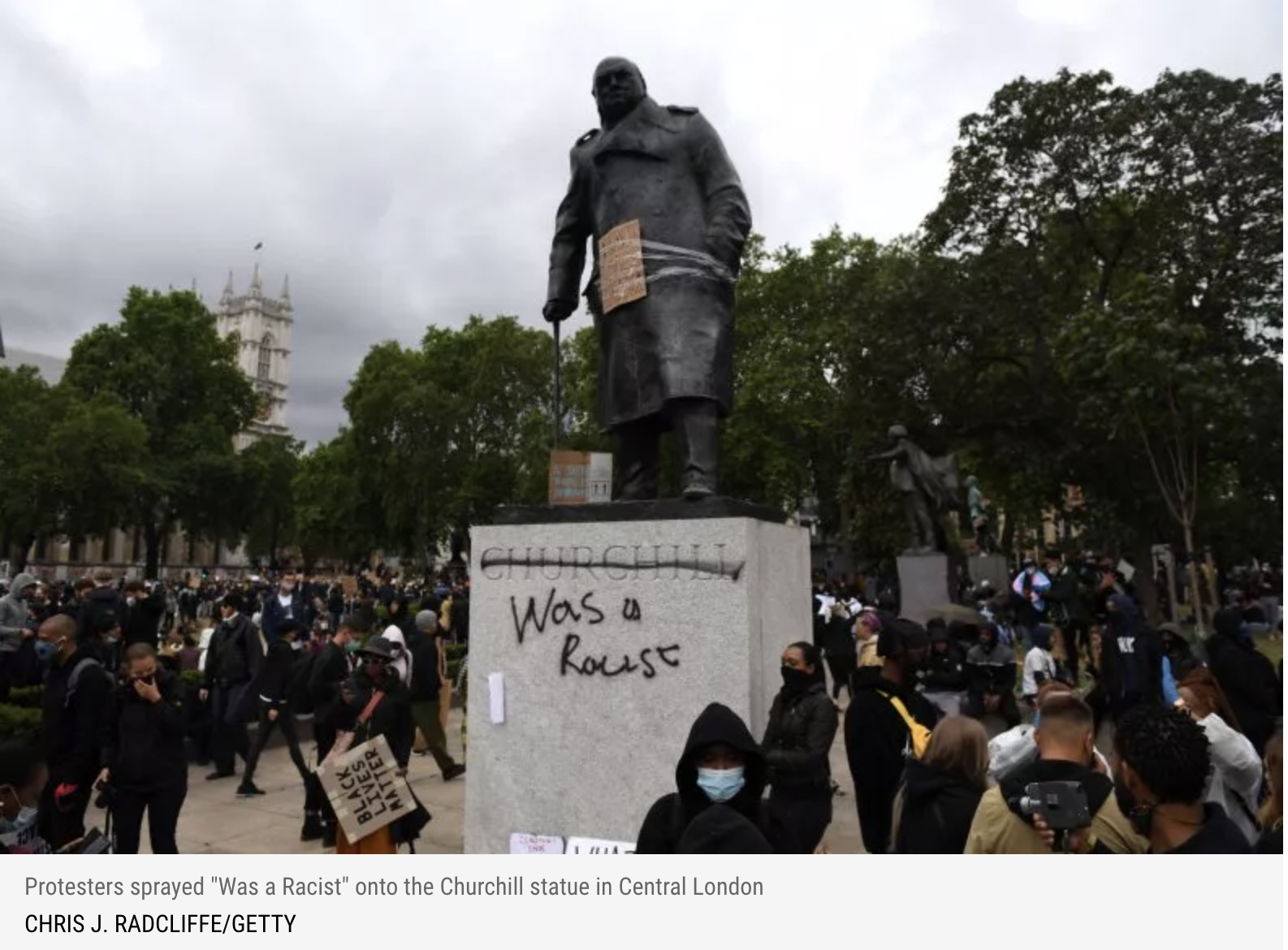 The statue had been covered with a protective cage, but the cage was removed for a visit by French President Emmanuel Macron. This picture is from a Reuters report. Some say that the statue should be put in a museum rather than left in the open, where it will surely be defaced in the future. 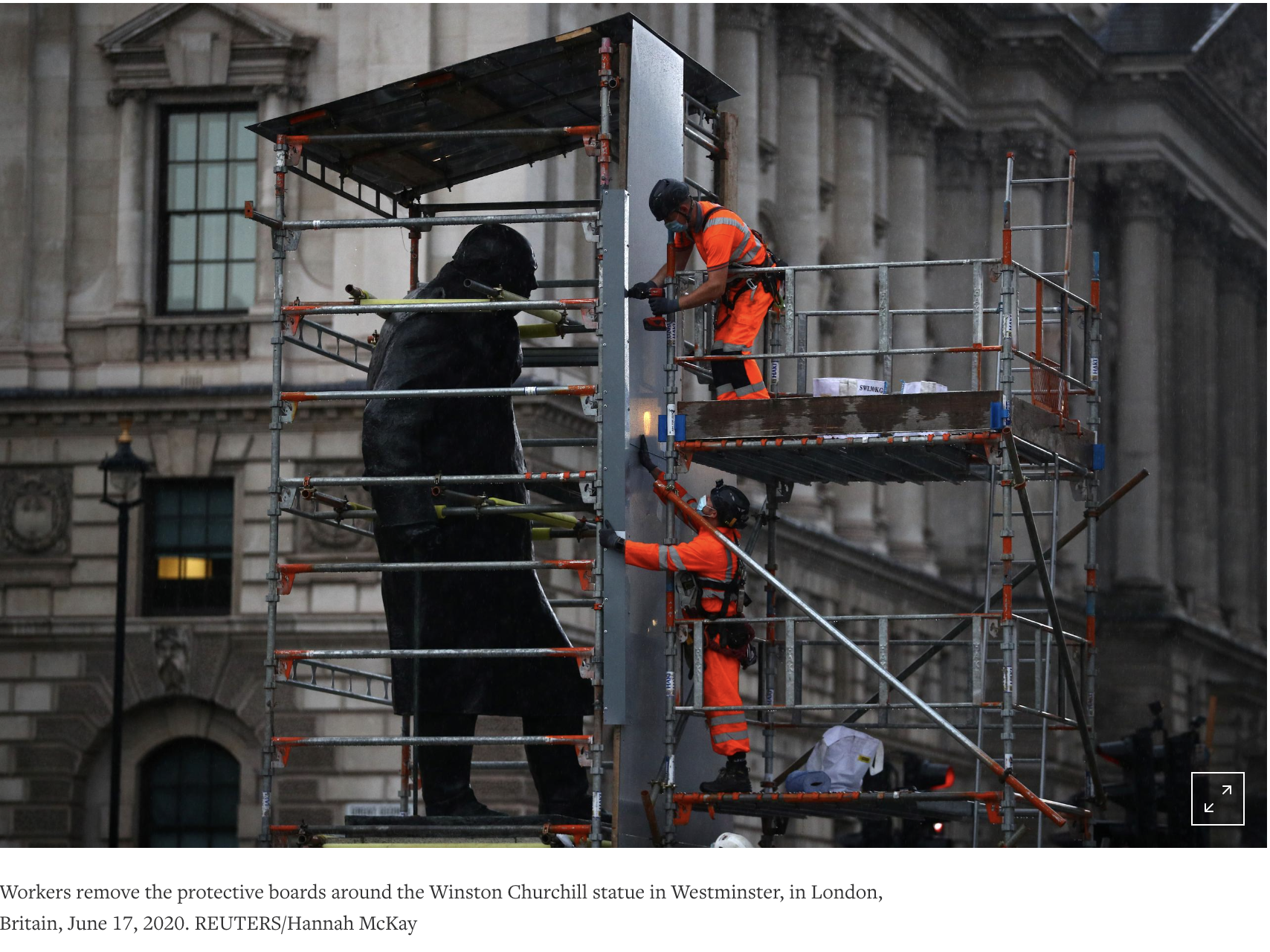 The issue of what to do with statues celebrating flawed or even thoroughly odious people is not an easy one, though to some it seems simple: pull ’em down! But by so doing you are erasing history, and, as we all know, not all of history is pleasant. It pains us to remember much of it, but do we erase the pain by erasing the past? Remember, erasure of history was Winston Smith’s job in Orwell’s novel 1984. I’d hate to think that, four decades after the time of Orwell’s prognostications, we’re approaching this kind of erasure for real.

Now I don’t favor leaving all statues up, but I’m generally in favor of it with “contextualization” of the more problematic ones. As a (secular) Jew, I still wouldn’t call for a statue of Hitler to be removed, but simply contextualized, perhaps with the kind of memorial to exterminated Jews that one sees in Israel or in the Pere Lachaise Cemetery in Paris.

By all means give your own take on this issue, including the three men above, in the comments.

256 thoughts on “Jefferson statue pulled down, Lincoln is next”