Yesterday I posted a critique of an Aeon article by physicist George Ellis, arguing that science itself gives evidence for true libertarian free will. This rests on his claim that psychology exerts a “top-down” effect on molecules, and those top-down effects, because they stem from our thinking, our experiences, and our personalities (all subsumed under “our psychology”), constitute libertarian free will. (He didn’t say exactly how the top-down stuff gives a non-physical “agency” to people, but merely suggests that it’s a way to think about it.)

For once most readers agreed on my take, mainly because those readers who aren’t hard determinists like me still accept the laws of physics, while Ellis seems to argue that the “top down” influence on our molecules, and hence our behavior and “choices”, cannot be reduced to physics, and in fact is free of the laws of physics.

My response was brief. Your personality and character—the “top”—are formed by changes in your brain induced by your genes, your environment, and all the experiences you have. And those changes are ultimately molecular changes that affect neurons.  And those changes obey the laws of physics. There is no “top” free from the laws of physics. (I add here that Ellis won the Templeton prize for harmonizing science and religion, which may go some way towards his promotion of a free will that seems quasi-religious, but certainly seems dualistic.)

Reader Steve commented on that post, saying “I asked Ellis to read your post and reply. Here’s what he said: https://aeon.co/essays/heres-why-so-many-physicists-are-wrong-about-free-will?comment_id=33240″ 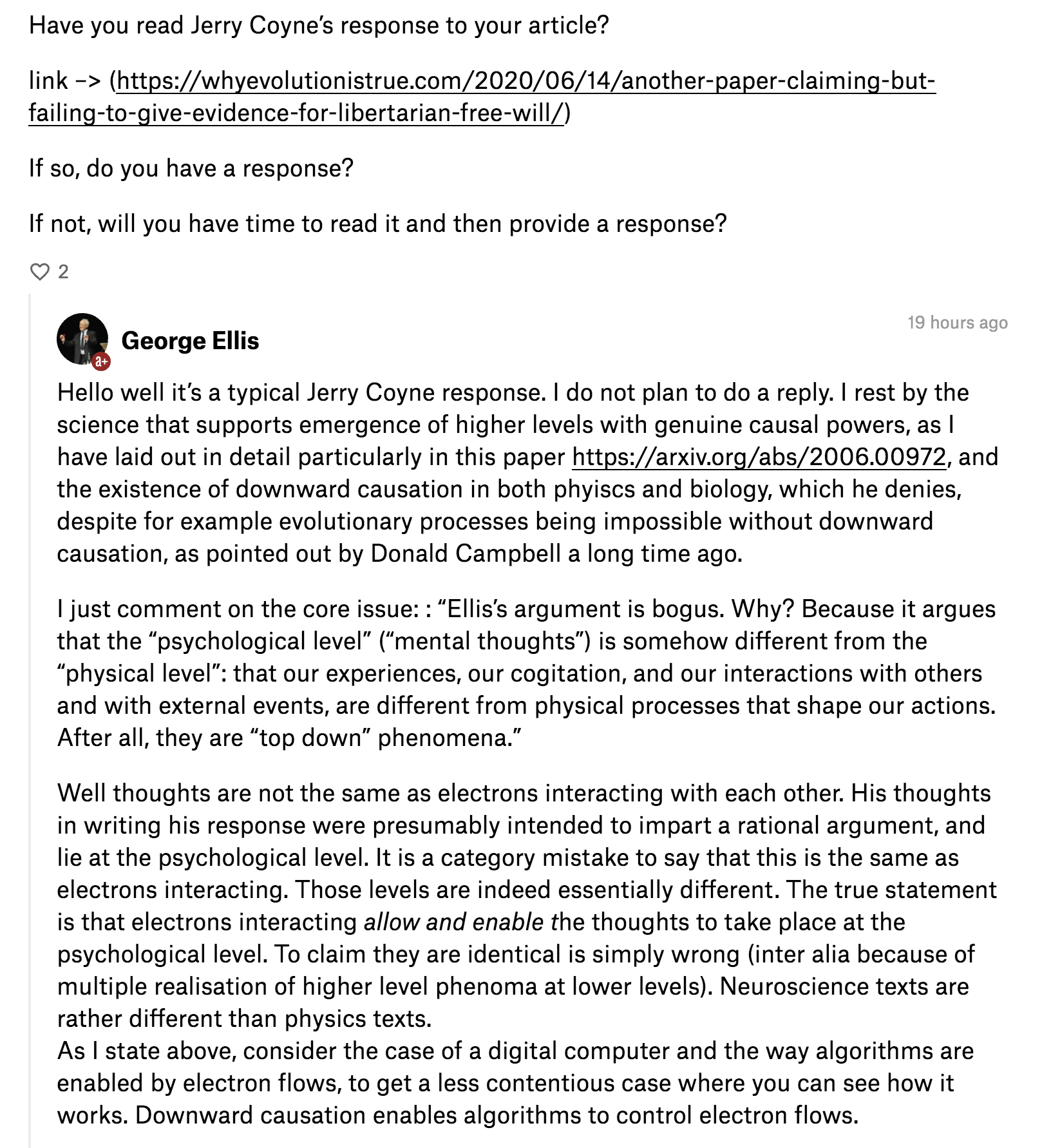 I consider this an inadequate answer, but I won’t engage with Ellis’s ad hominem argument that “it’s a typical Jerry Coyne response.” I’ll address his comment on the “core issue.” And that is Ellis’s claim that physical things like electrons and “psychological” things like feelings, emotions, and behaviors, are two different things; in fact, they are two entirely different things, and you can’t understand “psychology” using molecules.

Perhaps we’re not at the stage where we can predict the effects that the environment or brain molecules have on behavior, but we’re not completely clueless, either. Should Ellis doubt this, ask him to imbibe a few stiff bourbons and see if there aren’t predictable results. Or give him a course of testosterone and see how it affects his behavior. As many people, including me, have indicated, there are plenty of experiments showing that one can affect one’s decisions, one’s beliefs,—and, indeed, one’s sense of agency—through physical manipulations of the brain, whether they be by experimenters or disease.

In contrast, as Sean Carroll has emphasized repeatedly (see the article and tweet below) not only that there’s no evidence for physics-free top-down causation, but, indeed, there’s evidence against it from the laws of physics. There is no way we know of for nonphysical thoughts to influence physical processes.

The solution, of course, is the parsimonious and evidenced idea that thoughts and feelings are the results of the laws of physics, combined, of course, with the evolution that helped program our brain to (usually) behave adaptively.  When Ellis says “the true statement is that electrons interacting allow and enable the thoughts to take place at the psychological level,” he might as well say, “the electrons (and other particles and molecules) are what make the thoughts take place at the psychological level.” Then the influential “top” goes away.

Here are some writings by Sean Carroll on the intellectual vacuity of downward causation. Click on screenshot below.

Okay okay I wrote a bit on downward causation for The Big Picture. Thank me by pre-ordering! https://t.co/O1EMdfvERO pic.twitter.com/if8HQhUvNH