Senator Amy Klobuchar tweeted this out:

And the Minnesota Star-Tribune article says this:

Attorney General Keith Ellison plans to elevate charges against the former Minneapolis police officer who knelt on George Floyd’s neck while adding charges of aiding and abetting murder against the other three officers at the scene, according to multiple law enforcement sources familiar with the case.

Ellison is expected to provide an update this afternoon on the state’s investigation into Floyd’s death. According to sources, former officer Derek Chauvin, recorded on video kneeling on Floyd’s neck as he begged for air on May 25, will now be charged with second-degree murder.

The other three officers at the scene — Tou Thao, J. Alexander Kueng and Thomas Lane — will also be charged with aiding and abetting second-degree murder, according to the sources, who spoke on conditions of anonymity. Chauvin was arrested last Friday and charged with third-degree murder and manslaughter.

Thao was recorded watching as Chauvin continued to press on Floyd’s neck with his knee. Kueng was one of the first officers on the scene and helped pin Floyd down. Lane was detailed in earlier charges as pointing a gun at Floyd before handcuffing, and later asked whether officers should roll Floyd on his side as he was restrained.

I was keen on all the cops being charged from the outset, and now it’s happened. So far, at least with respect to Floyd’s death, justice has been done.  We can speculate that justice may be sidetracked if the officers get off, for the video itself pretty much tells the tale.

The defense, of course, has to make the prosecution prove its case, and in the case of second-degree murder in Minnesota they have to prove one of these violations beyond a reasonable doubt for Derek Chauvin: 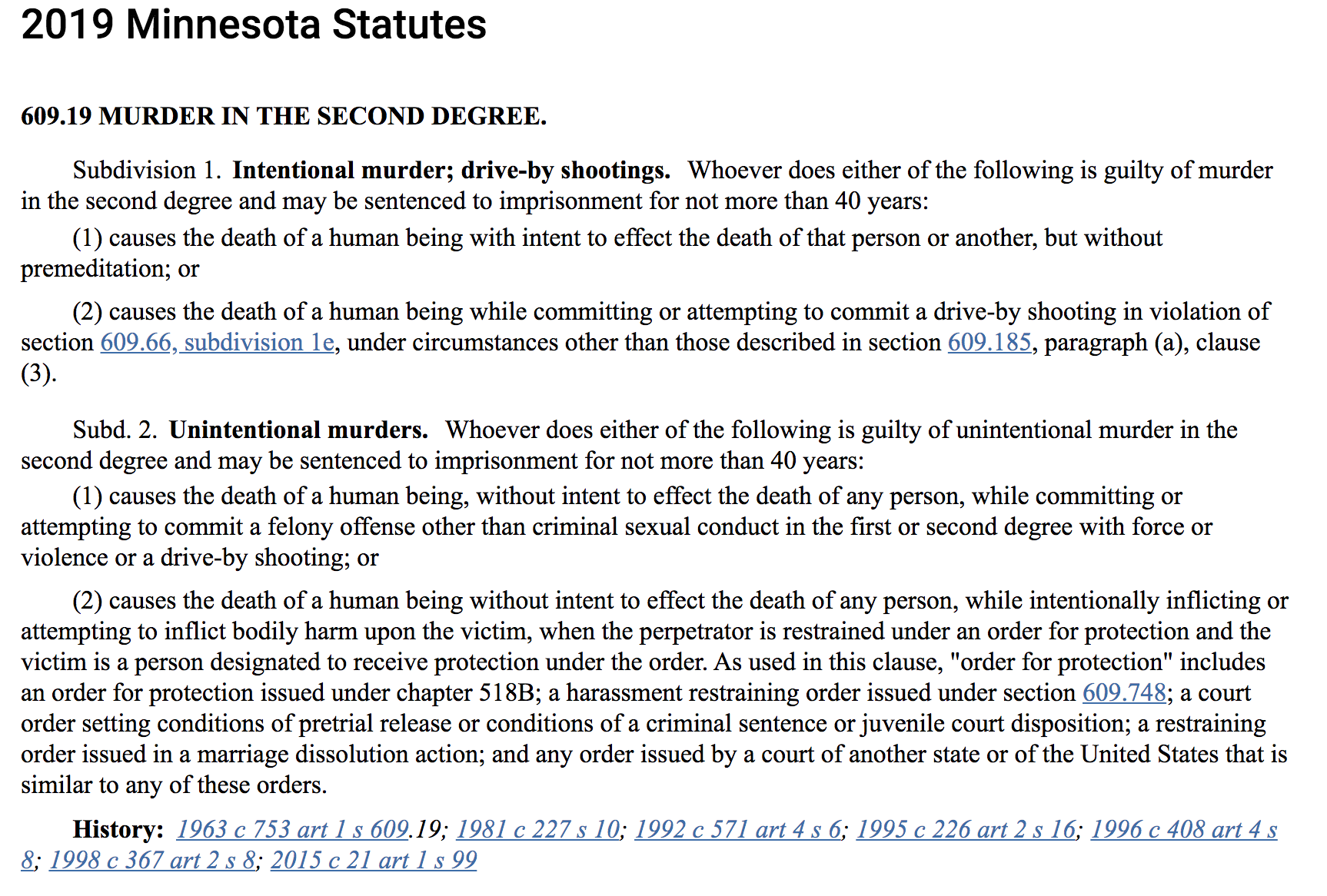 I suspect that Subdivision 1, point (1) is the relevant statute here, though they’d have to prove that Chauvin intended to cause the death of Floyd. As for the other three officers, charged with “aiding and abetting” Chauvin, I wasn’t able to find the statue (the server was down, probably busy), but they certainly stood by and heard Floyd cry “I can’t breathe”, and also stood by while Chauvin kept his knee on Floyd’s neck after the man became unresponsive.

A badge should not provide immunity against criminal acts. We’ll see what the defense has to say, but so far there’s no reason to assert that justice isn’t being done for Floyd. Whether it’s being done by police forces across the U.S. is another matter.

99 thoughts on “All officers in George Floyd murder now to face charges, with Derek Chauvin’s charge raised to second-degree murder”