Romper is a magazine for parents about how to understand and take care of their kids, and yesterday’s article (click on screenshot) emphasizes the huge increase in American gun sales during the pandemic. There’s no doubt that that’s true. But they also argue that there’s been a huge increase in unintentional deaths and injuries caused by children handling guns, an increase connected with the increase in sales. This is, as Romper calls it, a “hidden crisis.”  But the data they give about children-caused deaths are scant and unconvincing. The trend may well be real, but it’s not statistically demonstrable, and the article is a good example of how to mislead using statistics.

But let me back up. First, there’s no doubt that many people get killed by kids getting access to their parents’ firearms. This is a national scandal, and reflects both the pervasive ownership of guns by Americans and their failure to lock them up and store the ammunition separately. All I’m criticizing here are two statistics purporting to show a significant increase in child-caused deaths that went up with the increase in gun sales. That increase in sales is very real, and is really what I want to emphasize here.

A quote about gun sales, with the data shown below:

Within the COVID-19 crisis, another public health emergency is threatening our kids. Gun sales have surged during the pandemic, with an estimated 1.9 million more guns sold this March and April than during the same period last year. This spike in sales comes as kids and teens are home from school in states across the country, and many busy, distracted, overwhelmed parents try to balance work and homeschooling.

That data (see table below) seem sound, and this is really scary. More on that in a second.

But Romper adds this about 4-year-old Amir Jennings-Green, killed while playing with his cousins:

In an instant, Amir’s life was cut short in a tragedy that was preventable, one of at least 21 gun deaths that were the result of unintentional shootings by children in March and April of this year.

. . . All of these factors are increasing the risk that curious children and teens will get their hands on unsecured guns and hurt themselves or others. In March and April, unintentional gun deaths by children rose by a staggering 43%, as Everytown calculated, and unintentional gun injuries by children increased by 7% over the same period for the last three years. Those numbers could be even higher, as journalists struggle to cover the scope of gun violence while under lockdown orders.

In March and April of 2020, the peak months of the U.S. pandemic, there were 21 total deaths from guns handled by children, which is correctly represented as an increase of such deaths by 43%. That looks impressive, but the numbers are very small.

What it really means that there were 15 gun deaths caused by children the previous year. If we assume that there wasn’t a real increase, and the rate is about the same over time and can be estimated as the average value across both periods, we’d get an average of (15 + 21)/2 or 18 guns deaths expected each year. The numbers 21 and 15 are not significantly different from an expectation of 18, 18: the chi-square value is exactly 1, far from statistical significance. Although the difference may be real, one can’t demonstrate that it differs from a constant rate of children killing others that hasn’t changed between 2019 and 2020.  And certainly the 7% increase of “unintentional gun injuries” during that period cannot be statistically significant: it’s a difference between 33 and 35.

But if the numbers get even higher with a fuller accounting, then I’d be impressed.

It does seem likely that the more guns in homes there are, the more often we’ll have deaths and injuries. Regardless of the above, it’s clear that many more innocent people are killed and injured by home-stored or hand-carried firearms, or commit suicide when them, than are real malefactors like burglars and home invaders when guns are used in self defense. Ownership of guns, in net, takes more lives than it saves. That’s one reason why I favor a handgun ban, except, perhaps, for target shooting. (In that case, keep your guns locked up at the gun club.)

Well, enough of that; I expect the gun lovers will come out in force here to oppose me. But let’s just look at the increase in gun sales during the pandemic, which the Romper article breaks down by state (their link to the table below is here). 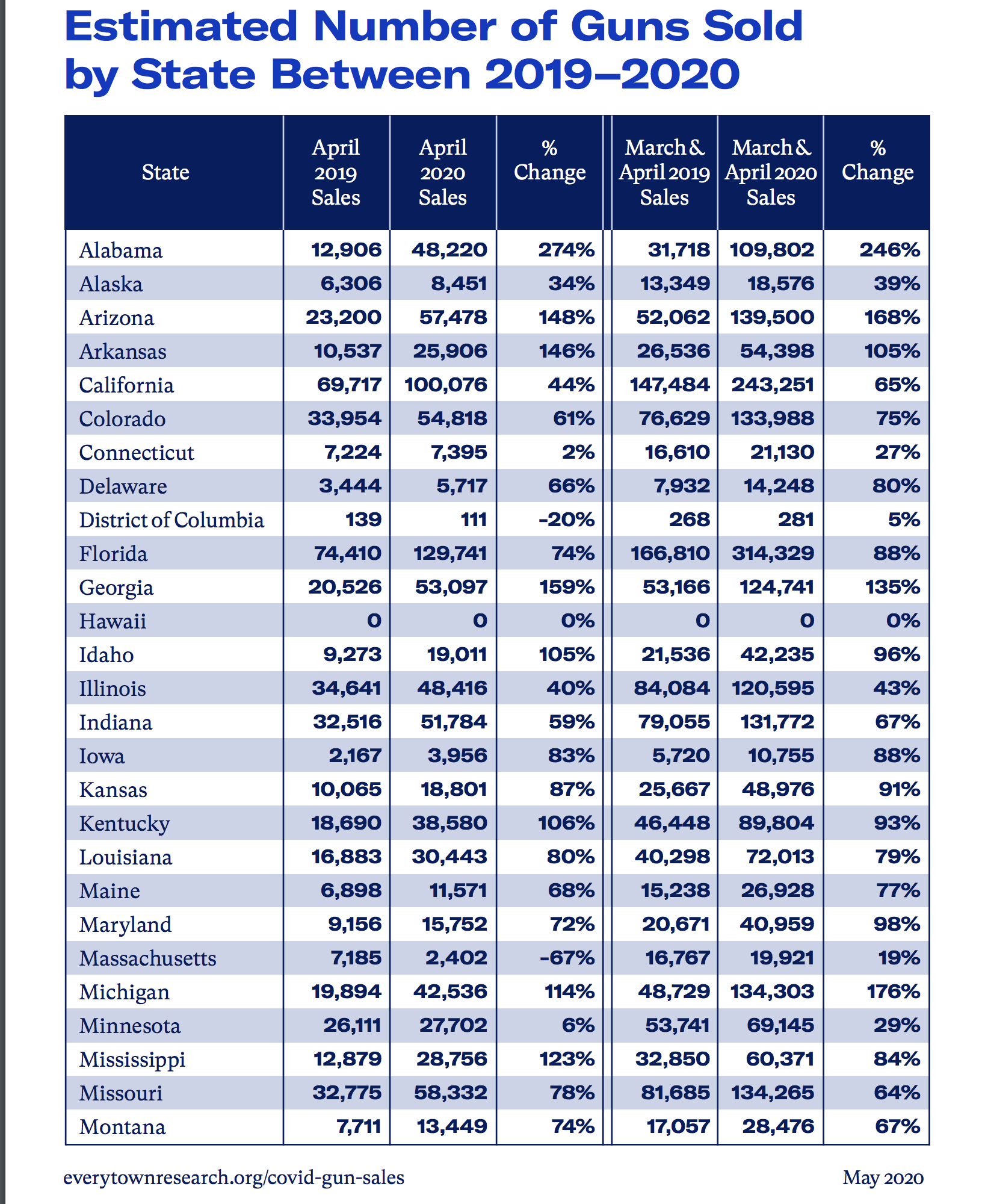 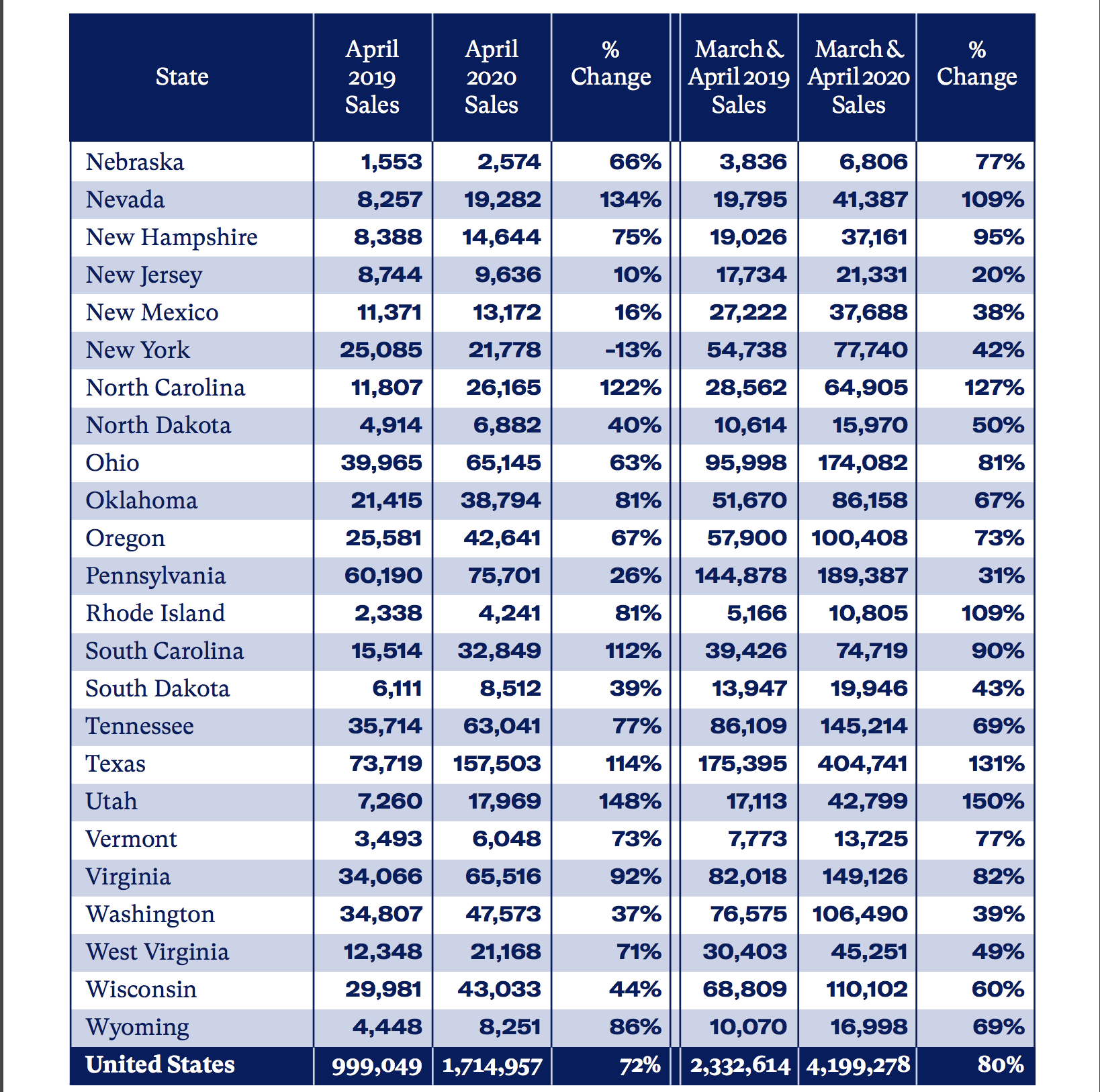 Just comparing March + April between 2019 and the pandemic period of 2020, we see that every state shows an increase save Hawaii, which reports no gun sales. That must mean that data aren’t available for the island state, as guns are legal in Hawaii and there are reports of a similar increase in sales there this spring.  Just scanning the data, I suspect that the rates are correlated with the “redness” of a state, but I’ll leave it to the readers to calculate such a correlation.

Overall, there was an 80% increase in sales between 2019 and 2020 during this period, and that is significant.

Why the increase? The Maui article above reports several causes:

All eight customers interviewed said they wanted to protect themselves and their families if coronavirus panic worsens and their safety is at risk.

“It’s not necessarily the virus that I’m worried about — it’s how people are reacting to the virus,” said one customer at the gun store, who asked for anonymity because her husband is a first-responder. “We’ve already had break-ins in our neighborhood. What if someone gets desperate and tries to steal supplies from our home?”

. . . “It’s combination of a few things,” Redeker said. “The virus thing is causing a lot of panic. That could explain the large numbers in a short time.”

And some people may fear that the government may try to take over during the pandemic, or there could be general civil unrest due to the disruption of society, and of course then the warm, living hands of Americans reach for their guns.

I’m ashamed to be living in a country so gun-happy, and once again I reiterate my call for not only greater gun control, but very strict gun control along the lines of England and especially Scotland. If guns don’t really protect you from the bad guys, and lead to more deaths of innocents than of malefactors, what reason is there to own them? The “militia” reason outlined in the Second Amendment is no longer valid.

73 thoughts on “Making America hate again: Gun sales way up during the pandemic”