After insisting for months that they were not guilty of bribing their daughters’ way into the University of Southern California by presenting fake resumes as athletes, actor Lori Laughlin and her husband, fashion designer Massimo Giannulli, have pleaded guilty to conspiracy charges. The details are in the article below from CNN (click on screenshot). The upshot: both of the privileged and wealthy parents are going to jail, though not for that long. 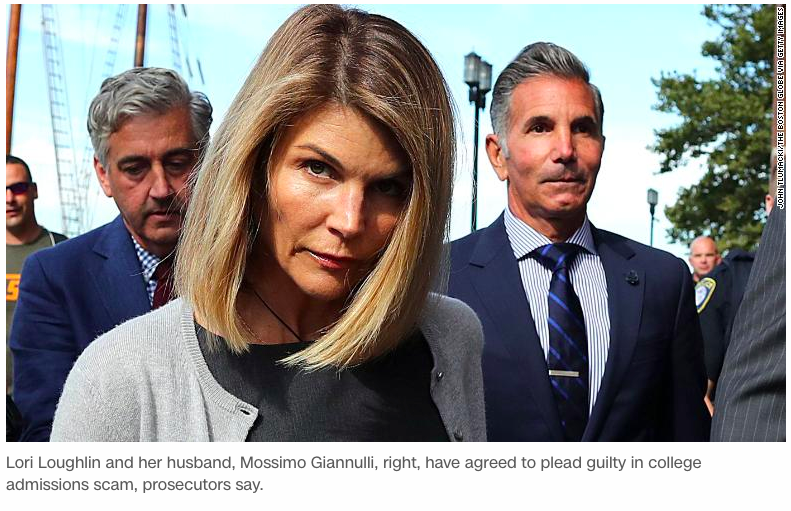 Loughlin, 55, and Giannulli, 56, had been accused of paying $500,000 to get their two daughters into the University of Southern California as fake crew team recruits. They had pleaded not guilty for more than a year and moved to dismiss charges as recently as two weeks ago.

They are scheduled to plead guilty on Friday at 11:30 a.m., prosecutors said.

“Under the plea agreements filed today, these defendants will serve prison terms reflecting their respective roles in a conspiracy to corrupt the college admissions process and which are consistent with prior sentences in this case,” said US Attorney Andrew E. Lelling. “We will continue to pursue accountability for undermining the integrity of college admissions.”

They were facing up to 20 years in prison if they pleaded “not guilty” but were then convicted, though nobody thought they would serve that much time (some thought “several years”). Loughlin and Giannulli are the 23rd and 24th parents to plead guilty in this case; the most famous was actor Felicity Huffman, who also pleaded guilty from the outset and served 11 days.

I’ve followed this case more closely than usual for such a scandal, probably because it involves something that I consider unconscionable: forging one’s credentials to get into college. By so doing—and both daughters were accepted, though they are no longer students—you take the place of someone more deserving.

And USC is a good school, which somehow makes it seem worse. Thus I was hoping for a fairly stiff sentence, probably as a deterrent. Two to five months in stir seems pretty weak to me, though both parents will be convicted felons and their ability to make money will be reduced (their famous fashion-blogger daughter Olivia Jade has already had several of her contracts dropped, most probably on the grounds that they were probably complicit in this scam).

The couple always insisted that they were simply doing what is common practice: donating money to a school in return for favorable consideration for their daughters’ admission, and that it was not tit-for-tat bribery. But that doesn’t explain the phony applications listing their daughters as crew coxswains.

Why did they change their plea? The Los Angeles Times says this:

Earlier this month, a judge declined to dismiss the fraud, bribery and money laundering charges against Loughlin and her co-defendants, ruling that federal agents and prosecutors did not pressure Singer, their chief cooperator, to mislead his clients on recorded phone calls and draw out flawed evidence of criminal intent.

And, in a levying of the “not guilty plea tax”, prosecutors heaped additional bribery charges on the pair, raising the stakes—and potential jail time—considerably.

From what I’ve seen of the documents in the case, which includes the phony admissions forms, Loughlin and Giannulli seemed clearly guilty. Some of the people calling for their heads undoubtedly wanted some Schadenfreude, perhaps because of Loughlin’s squeaky-clean role as Aunt Becky in the t.v. show
“Full House”, but what I wanted was a sentence that would deter others from cheating.

Will it? Is two or five months in jail, along with fines and community service, fit punishment for these crimes?

You can weigh in in the poll below (please respond):