I missed this because I left out today’s anniversaries in the Hili dialogue. There are two big ones today, both pointed out by Fiona Fox, director of the Science Media Centre in Britain. Dr. Fox quotes remembrances from two of her experts (h/t Steve Jones):

Today is VE-Day. [JAC: the 75th anniversary.] It is also the 40th anniversary of the WHO declaration of the eradication of smallpox, which in the 20th century alone killed an estimated 400 million people, many more people than in both world wars. Whilst in the midst of another viral pandemic, we should remember the magnificent role that WHO played in ridding the world of smallpox and the power of vaccination. WHO should be encouraged, supported and funded in its efforts to control and eliminate COVID-19.

“Smallpox, the most terrible of all the ministers of death: The smallpox was always present, filling the churchyard with corpses, tormenting with constant fears all whom it had not yet stricken, leaving on those whose lives it spared the hideous traces of its power, turning the babe into a changeling at which the mother shuddered, and making the eyes and cheeks of the betrothed maidens objects of horror to the lover”

“it now becomes too manifest to admit of controversy that the annihilation of the smallpox, the most dreadful scourge of the human species, must be the final result of this practice”

JAC: Here’s what smallpox does even when it spares a life. This child will be irreparably scarred:

And here’s the resolution: short, sweet, and succinct: 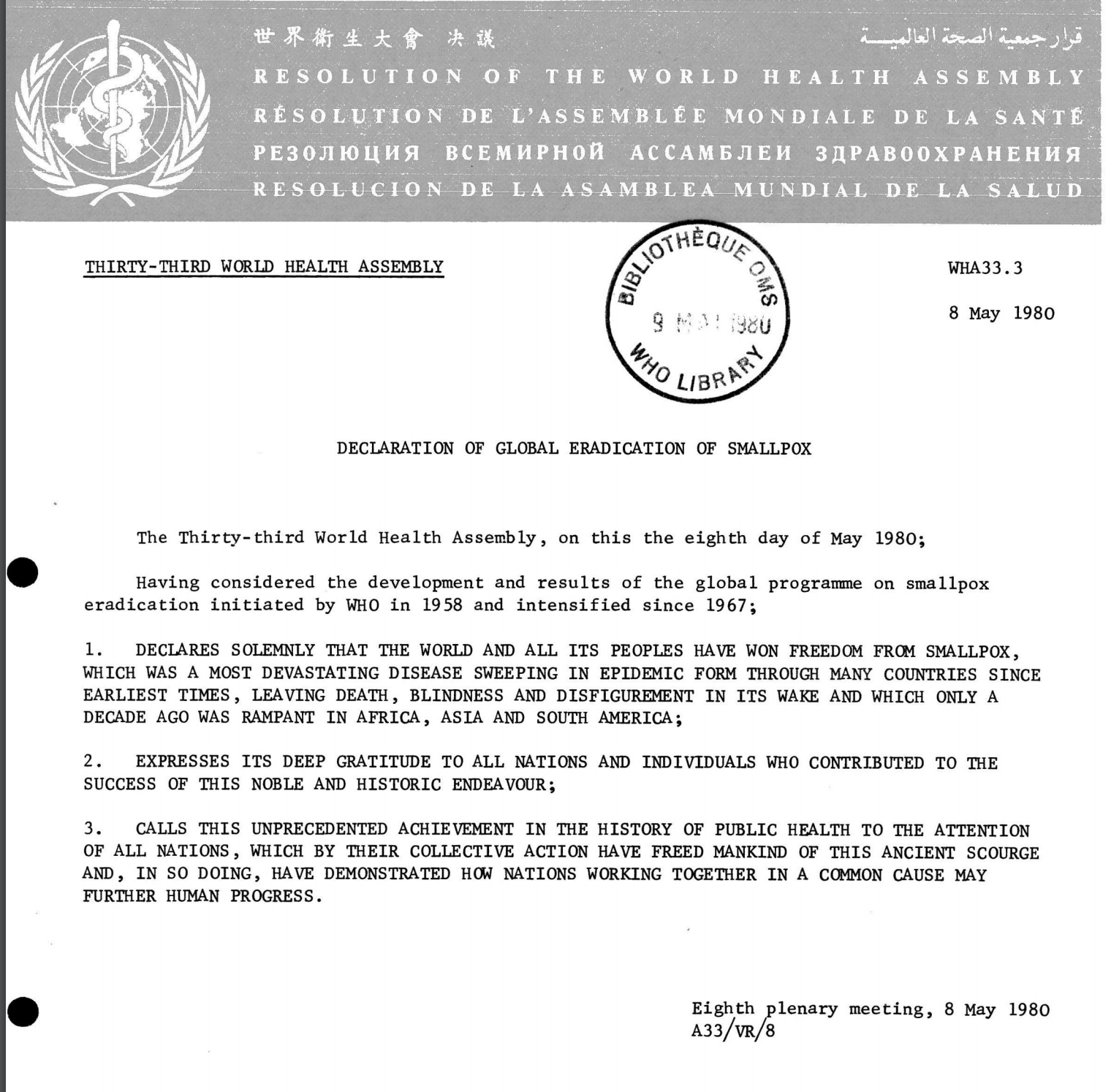 With attention focused on the 75th anniversary of VE Day, and distracted by the COVID-19 pandemic, an important anniversary may pass us by, with some relevance to our present situation.

On 8 May 1980, the 33rd  Assembly of the World Health Organisation officially endorsed the successful eradication of smallpox in October 1979.

Smallpox (with a mortality rate of about 30%) killed 300 million people in the 20th century alone (three times the death toll of both World Wars), and 500 million in its final hundred years).

– No one can therefore seriously suggest that the variola virus that causes it arose from anything other than a natural source.

– Infections were controlled and reduced by vaccination; the disease was finally eradicated by a massive global campaign spearheaded by WHO.

– That campaign relied on rigorous and extensive field epidemiology, using a “track, trace and [ring] vaccinate” approach (with no rapid molecular diagnostics available at the time, diagnosis relied on recognition of the distinctive lesions and other symptoms)

– The final battlegrounds for the eradication were Bangladesh, Ethiopia, Kenya and Somalia, where the last natural case was identified.

WHO commemoration of the 40th anniversary of smallpox.

And here’s a quiz for you. Another deadly viral disease, but in animals, has also been completely eliminated by a combination of monitoring and vaccination. This one was declared eliminated in 2011. Do you know the disease? Look here for the answer.

20 thoughts on “Two anniversaries today, both marking the end of wars, one against people, the other against a virus”