Spring is coming slowly to Botany Pond, for the weather has been cold. The lily pads—future refuge and restaurant for the ducklings—haven’t even peeped their heads above water. But the flowers around the pond are blooming, and they’re lovely. (Don’t ask me what these are; those who know plants are invited to identify them.) 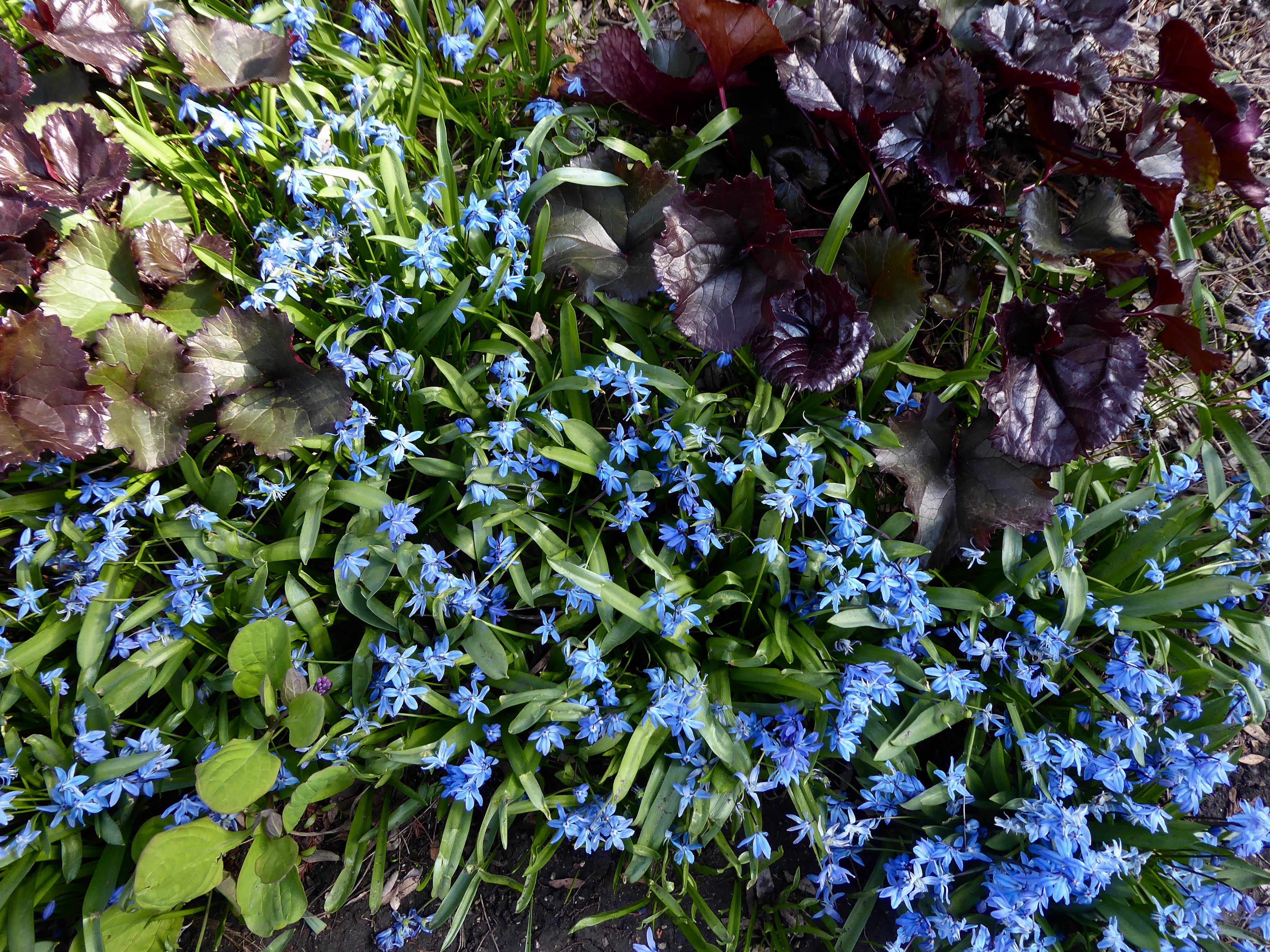 In the meantime, both hens are sitting pretty tight on their nests, appearing only for an hour or so every few days to get a drink, a snack, and a bath.  Here’s Dorothy on her nest on April 18: 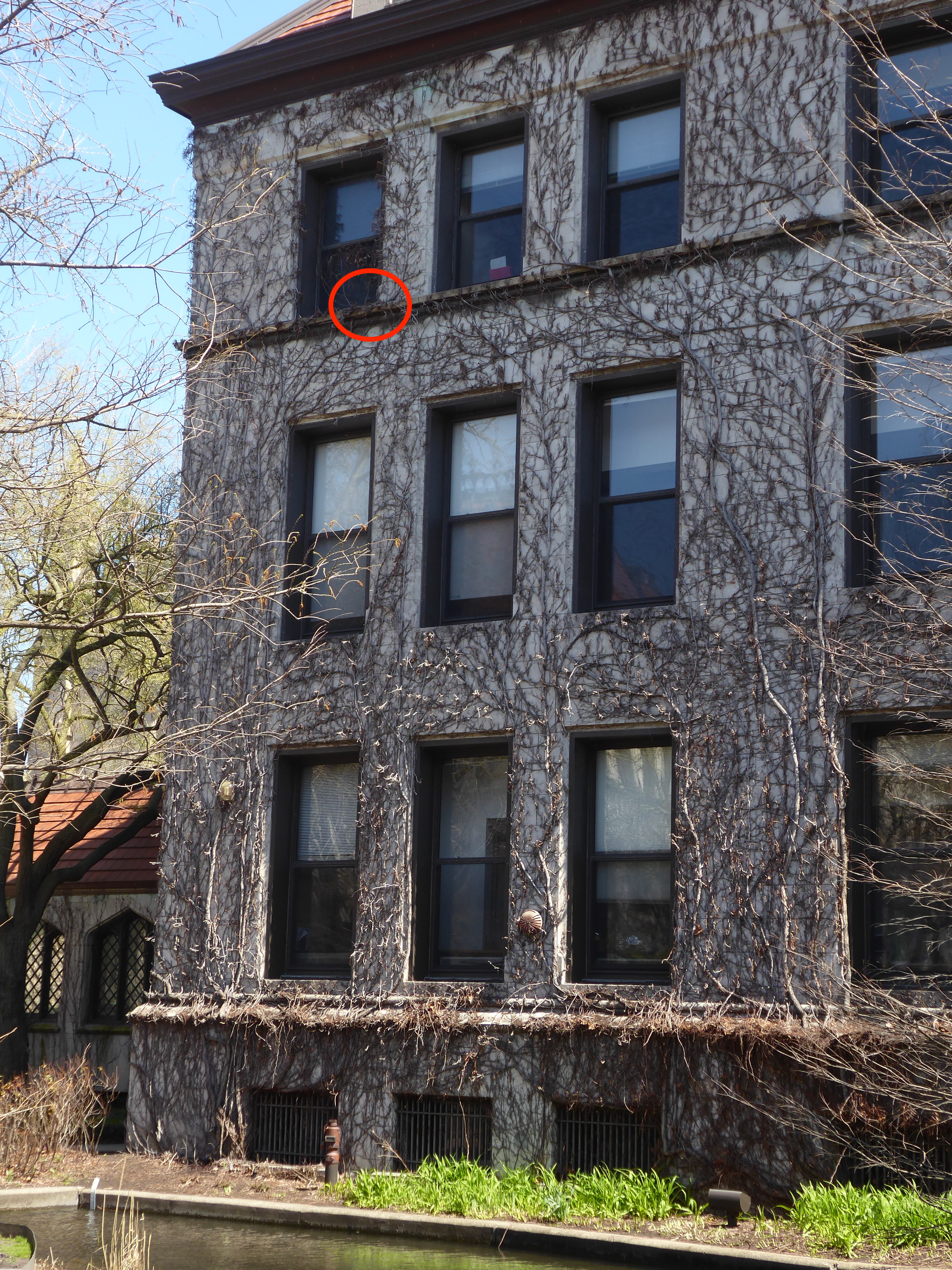 A closer view of Dot, who may be one of Honey’s daughters (I’ll never know): 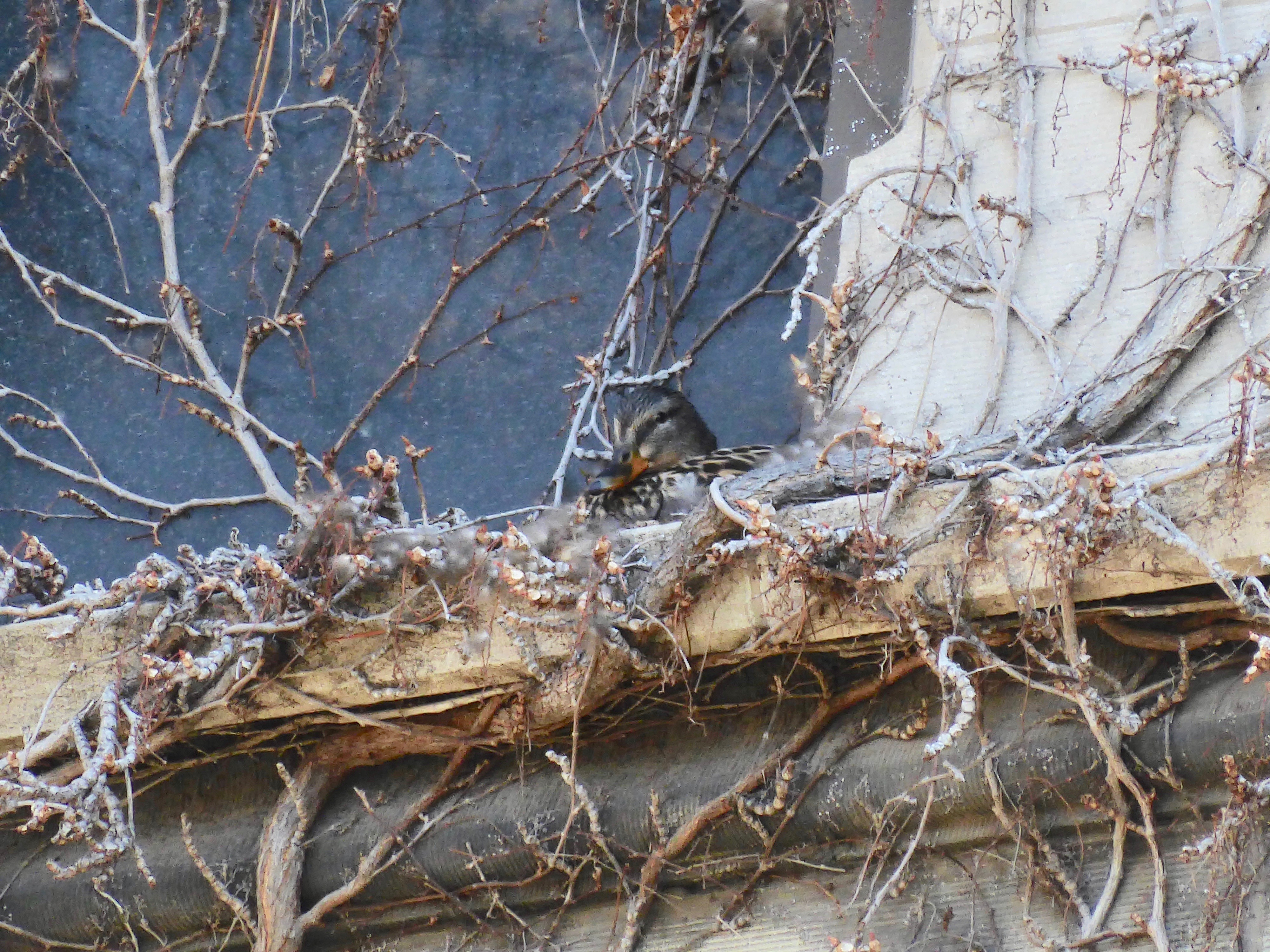 On April 20, Dorothy flew down to the pond (along with Honey) to take a break. Here she is bathing and preening. Note that she keeps looking up to her left. That is precisely where her nest is located, so I suspect she’s keeping an eye on it.

Honey on her nest (circled) on April 18. You can see her little head: 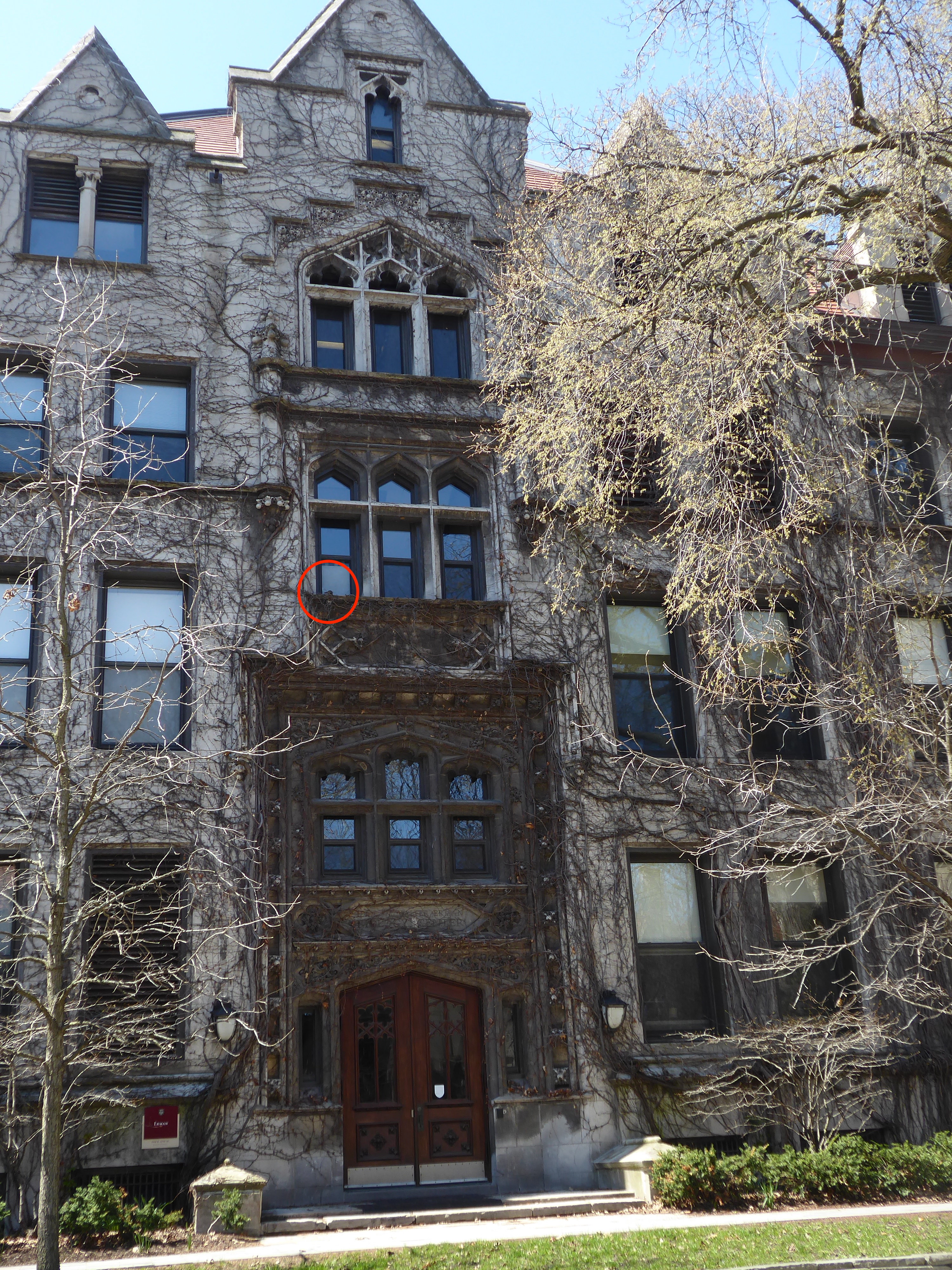 A close-up view. She’s such a good mom! 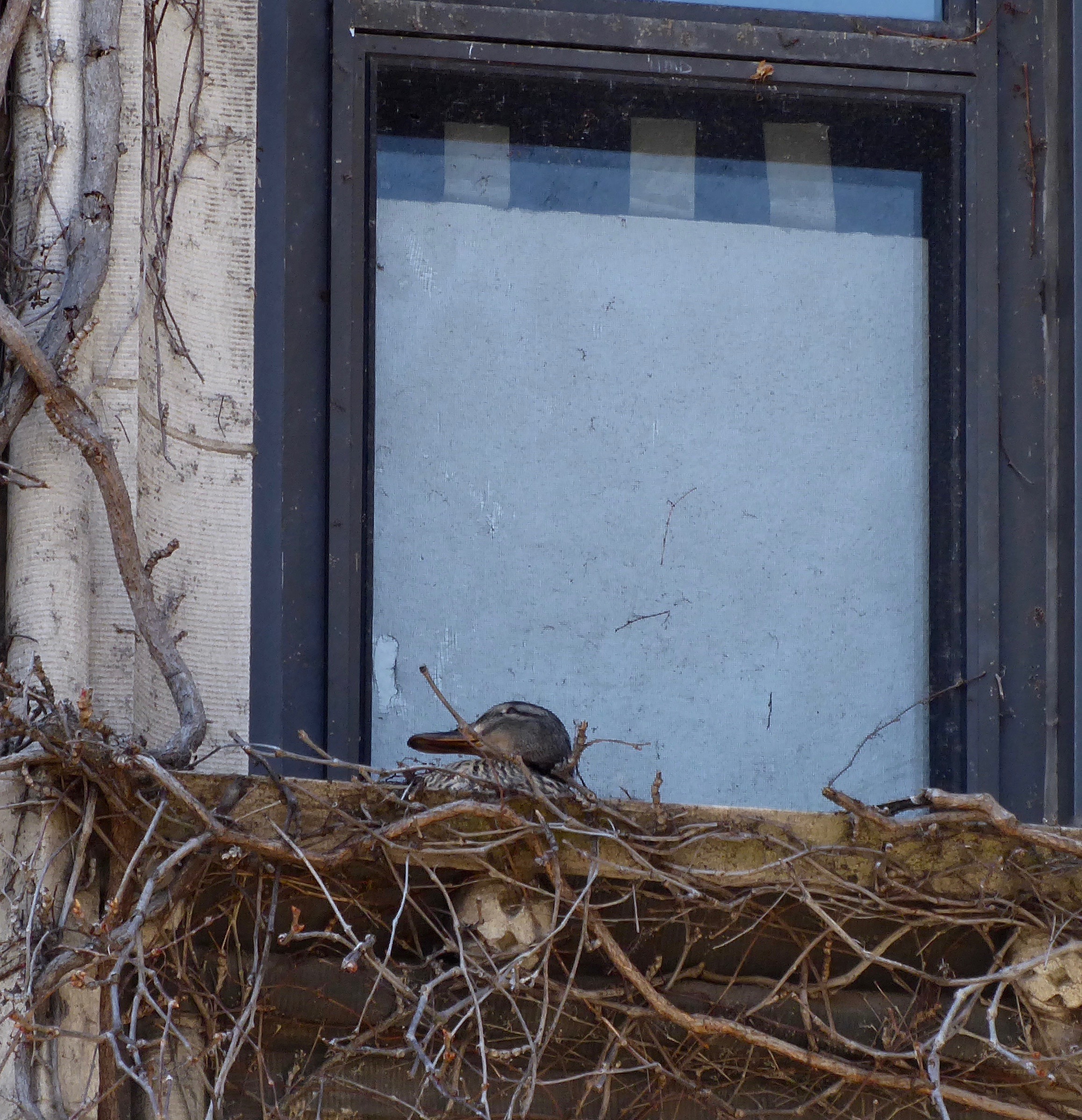 Honey on her nest the next day, without having moved. Incubation is onerous. 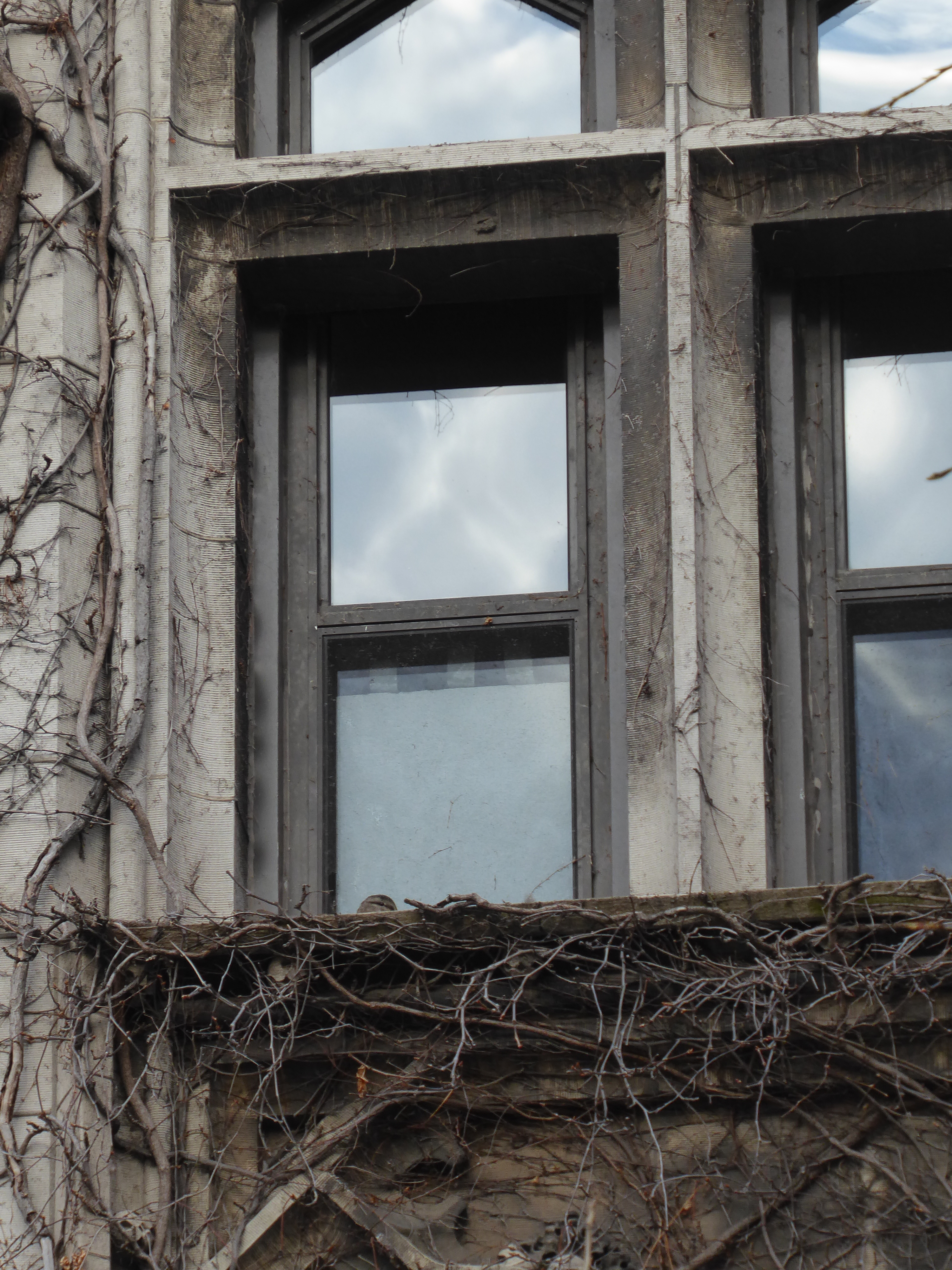 And a close-up view: 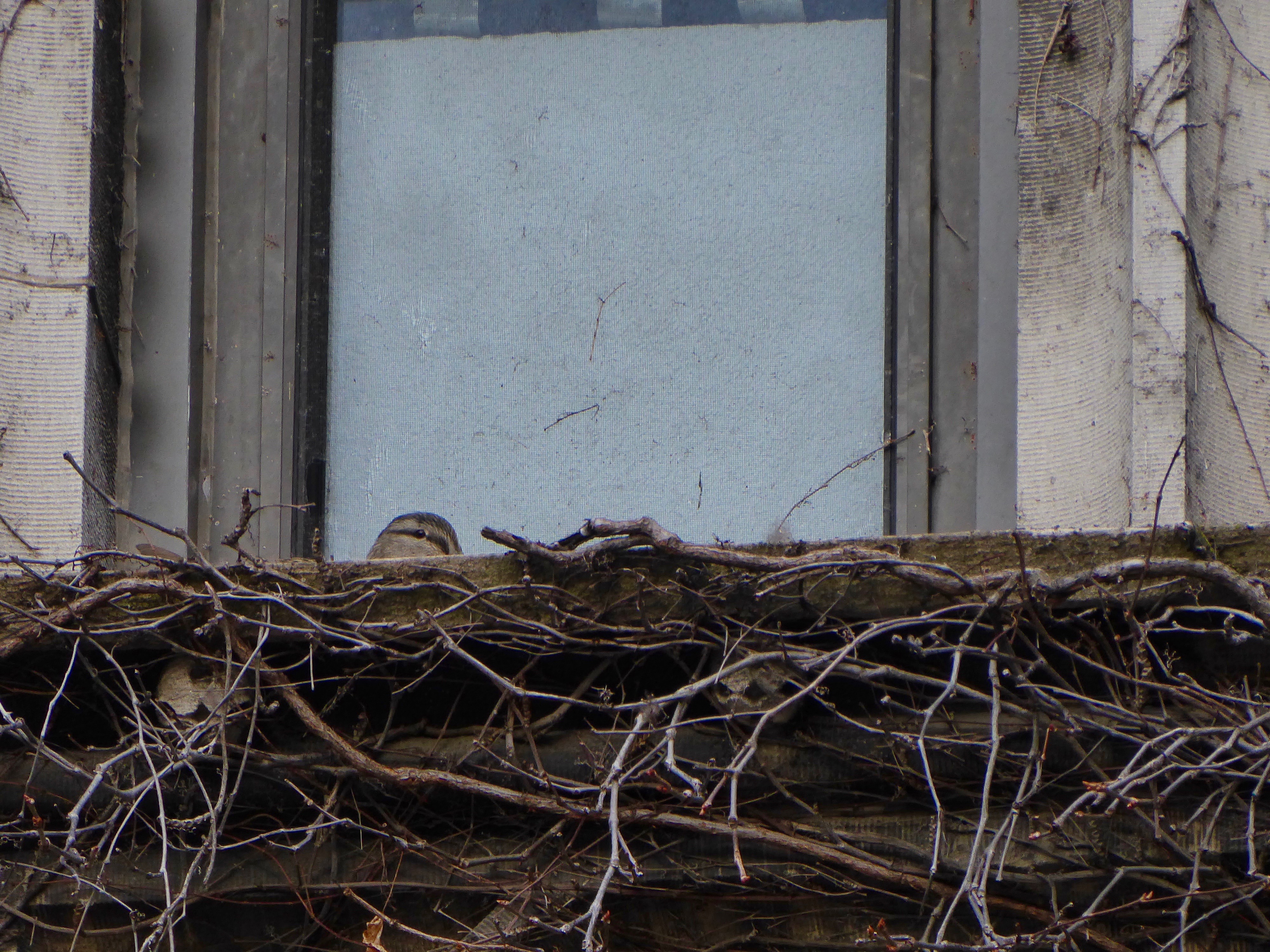 On April 20 we had a first: both nesting mallards were on the pond at the same time. I saw them from my window and ran down to feed them. They both jumped out of the pond and came waddling toward me, and I fed them on the sidewalk. Honey even ate from my hand! Then I got them back in the water and fed them more duck chow and mealworms. Mallards get famished when they’re incubating, and I keep feeding them until they’re sated and their crops are swollen.

Can you tell which hen is which? Dorothy is in the front, Honey in the rear. The both look to be in good condition. 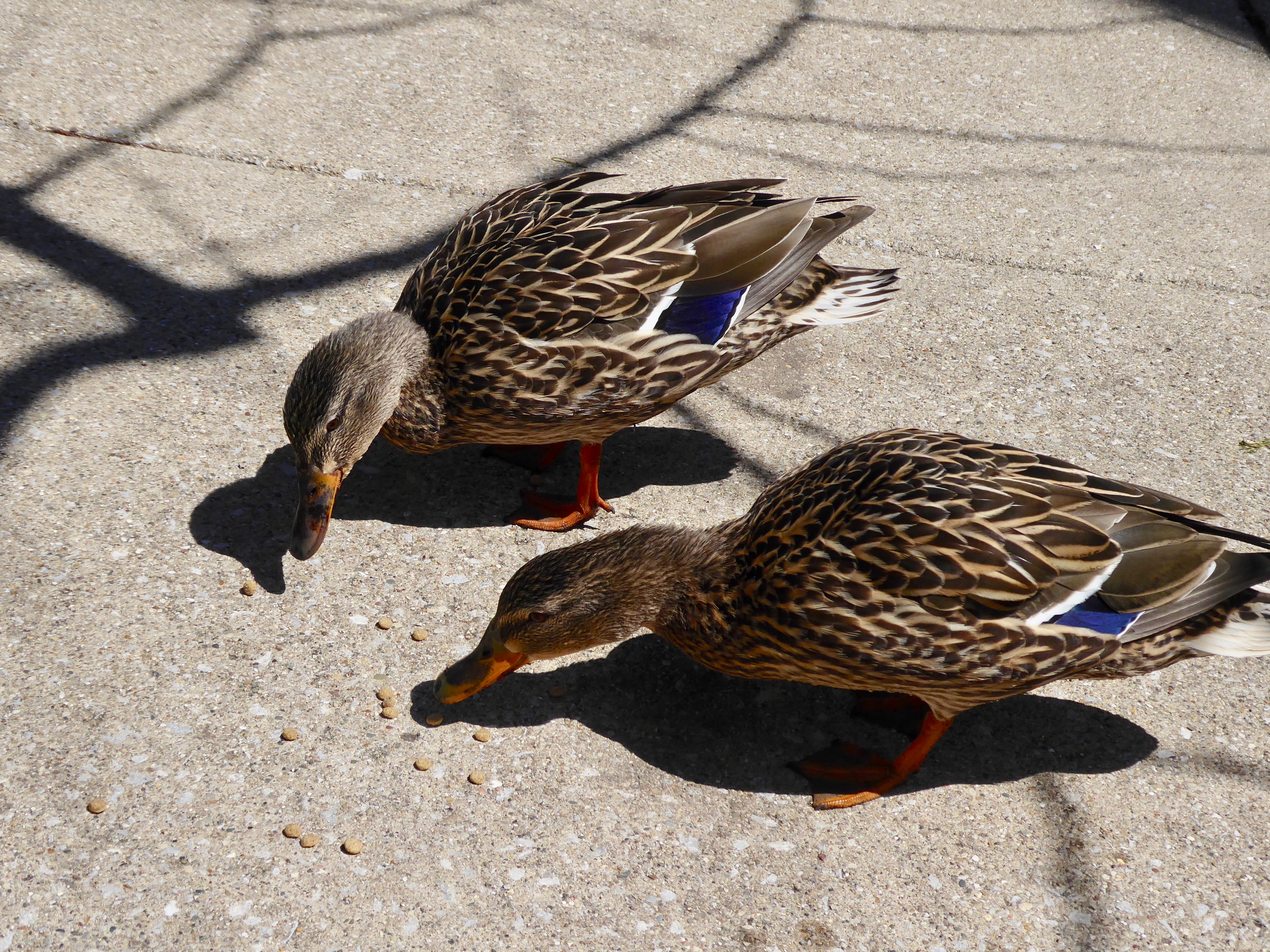 And of course Wingman came out of the pond to look after his harem. He doesn’t eat nearly as much as the hens; he just wants to guard them. 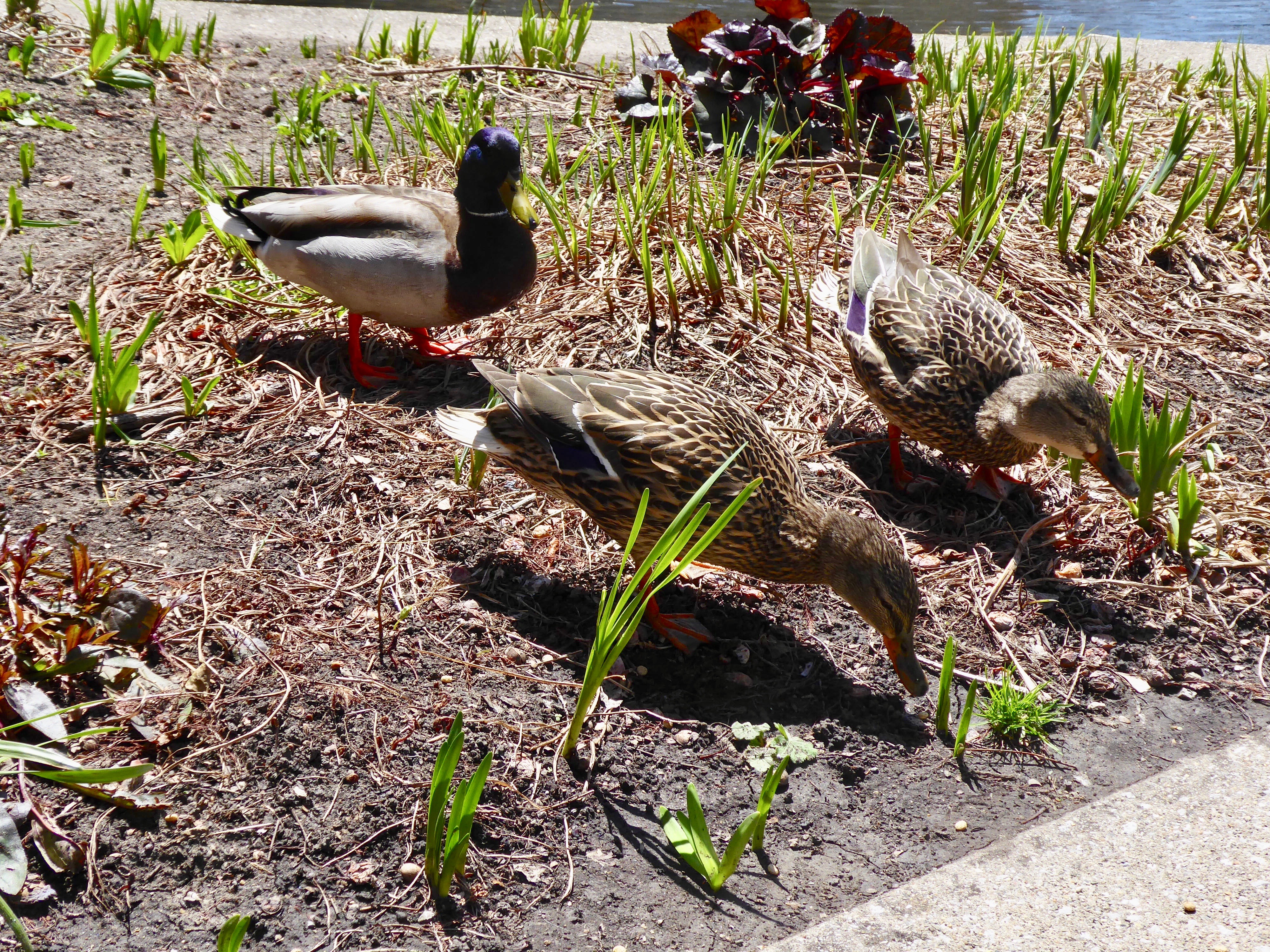 Both hens and the drake had a fine bath that afternoon. Here’s Wingman preening. Note how he dunks his whole body underwater a few seconds in:

For some reason, itinerant drakes always come to the pond in the early morning. The other day there were four, and, following Wingman, they steamed toward me like a flotilla of iridescent battleships. I don’t feed them, as I don’t want them to stay, but I will feed Wingie when he’s by himself. I’d like to keep him around, for he’s a dominant drake and will drive others off when there are hens and ducklings. 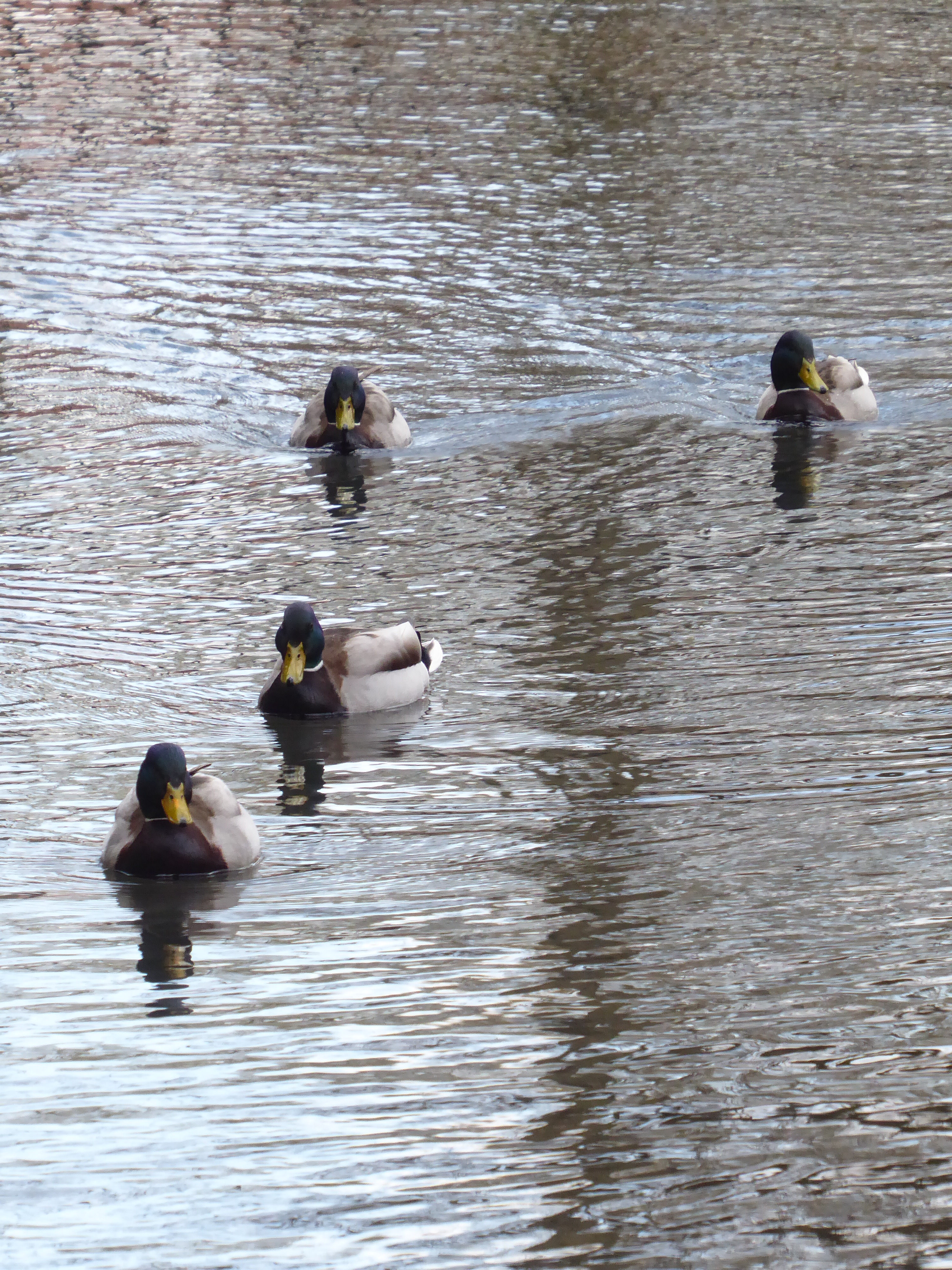 Next post: The amazing preparations that Facilities has made for Jump Day and the ducklings.