This is the kind of thing that ticks me off about Christian “charity”: there are nearly always goddy strings attached. When believers tout the noble acts committed in the name of their faith, they never mention these strings. In contrast, when humanists or atheists do organized charitable acts, they never ask the recipients to abjure God or give up their faith.

And so, when Franklin Graham donated money to help set up a Covid-19 field hospital in New York’s Central Park, he required volunteers to adhere to the oppressive strictures of his brand of Christianity. Read (and weep) by clicking on the screenshot below, an article in the Charlotte [North Carolina] Observer: 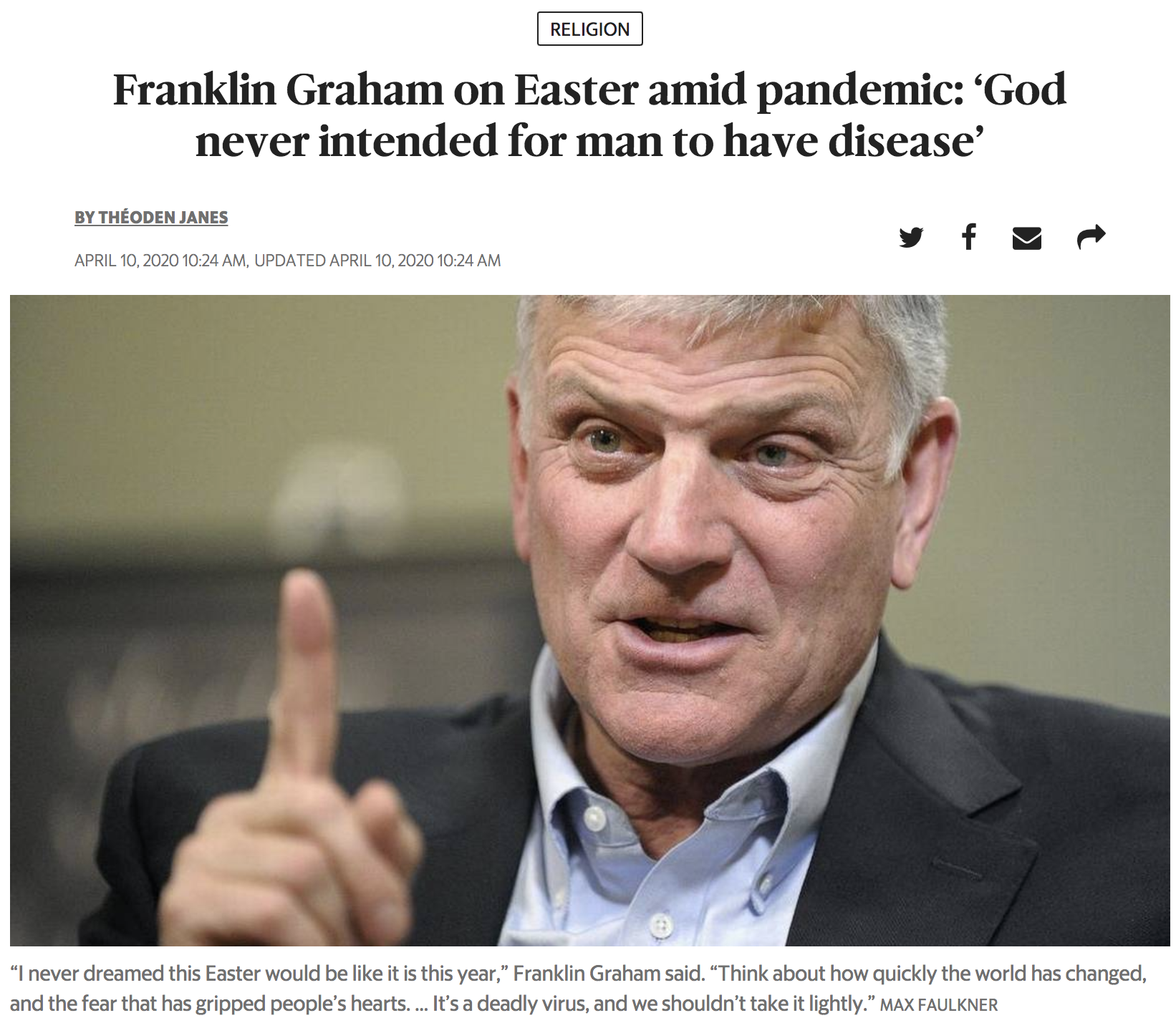 Franklin Graham is of course the son of evangelist Billy Graham, and head of the Billy Graham Evangelistic Association. The news report is notable for highlighting not only Graham’s “strings,” but also his crazy Biblical explanation for the pandemic. The virus spread and killed, of course, because the world is FALLEN. (In a later post today, we’ll see another faithhead who attributes the virus to SATAN.) Here’s what the Observer found out in a phone interview with Graham:

Asked about a comment he made to Fox News personality Jeannine Pirro last Saturday contending that COVID-19 has spread “because of the sin that’s in the world,” the 67-year-old evangelist said:

“When God made man, he never intended for man to have disease. And to have death. He put us in a perfect world. The climate was perfect. The conditions were perfect. The food to eat. But man rebelled against God. And the Bible is very clear that, as a result of this rebellion against God, we live in what we call ‘a fallen world.’ So we have cancer. We have the coronavirus. We have diabetes. We have all of the other problems we have as a society. We have murder, we have thefts. …

“But that wasn’t God’s intention. That’s why God sent his son Jesus Christ to take our sins. And Christ died for our sins. That’s why we celebrate Easter.

“So I see the coronavirus, I see the wars of this world, I see the economic problems — I see all these other things — as just a result of the fallen world in which we live. And that’s as a result of sin that came into the world and has infected the entire human race.”

Let me get this straight.  God sent Jesus to die for our sins so that he could raise up the Fallen World created by Adam and Eve and their consumption of fruit.  So why is the world still afflicted? If “God’s intention” was to rid the world of death and disease, why does he still let it go on, even after his gallant effort of assuming human form and getting himself tortured and crucified? I suppose theologians would say that we’re still victims of original sin, and must pledge fealty to Jesus to partake of salvation, but how is a baby who dies of disease or starvation “sinful”? For what is it being punished?

Clearly, Graham is a loon. But even a blind loon can find an acorn, and so Graham is practicing “Christian charity” by helping set up a Covid-19 treatment unit in New York.  But there are those pesky strings. . .  (my emphasis)

. . . [Graham] had no qualms about his feelings on another — the one involving Samaritan’s Purse, the Boone-based evangelical Christian organization that he leads.

Samaritan’s Purse recently worked with the Mount Sinai Health System in New York City, the epicenter of the U.S. coronavirus outbreak, to set up a small field hospital in Central Park comprising 14 tents and 68 beds (including 10 ICU beds equipped with ventilators).

As with all of its volunteers, Samaritan’s Purse has required those wanting to help out in New York City to agree that “marriage is exclusively the union of one genetic male and one genetic female,” per its statement of faith.

That statement of faith also opposes abortion: “We believe that human life is sacred from conception to its natural end; and that we must have concern for the physical and spiritual needs of our fellowmen.”

Now it’s not clear whether everyone who helps at that facility must sign and adhere to the statement of faith, but that’s what it seems like:

On Thursday evening, Graham elaborated on the anti-LGBT requirement regarding Samaritan’s Purse volunteers:

“All of our doctors and nurses and staff, (they’re) Christians,” he said. “We believe it’s very important that — as we serve people and help people — we do it in Jesus’ name. …

“So, we try to screen the people that work with us. And we want men and women who believe the way we do and have the same core values that we have.”

And so, it seems, Mount Sinai, which began as a Jewish organization but is now secular, must go along with Franklin’s ludicrous strictures. No swearing, no belief in gay marriage, no sex outside marriage, opposition to abortion, and belief in the Trinity (read the Samaritan’s Purse statement of faith to which volunteers must adhere).

New York state Senator Brad Hoylman, however, tells it like it is (he’s a Democrat, of course, and also is gay):

Bigots like Franklin Graham can believe whatever they choose. It’s a free country, even for homophobes.

But when you come to New York, you’ve got to follow our anti-discrimination laws.

Being gay is not a sin. Telling LGBTQ New Yorkers that they are wrong to love their partners might qualify. https://t.co/JjNziYmjNZ

The strings of Samaritan’s Purse, it seems, are long and tortuous.
h/t: Ken