Imagine my shock to see this page at the Discovery Institute’s Evolution News site (click on screenshot; I’ve archived it so the DI doesn’t get clicks).  The author is Granville Sewell, an intelligent-design creationist and a professor of mathematics at the University of Texas at El Paso. 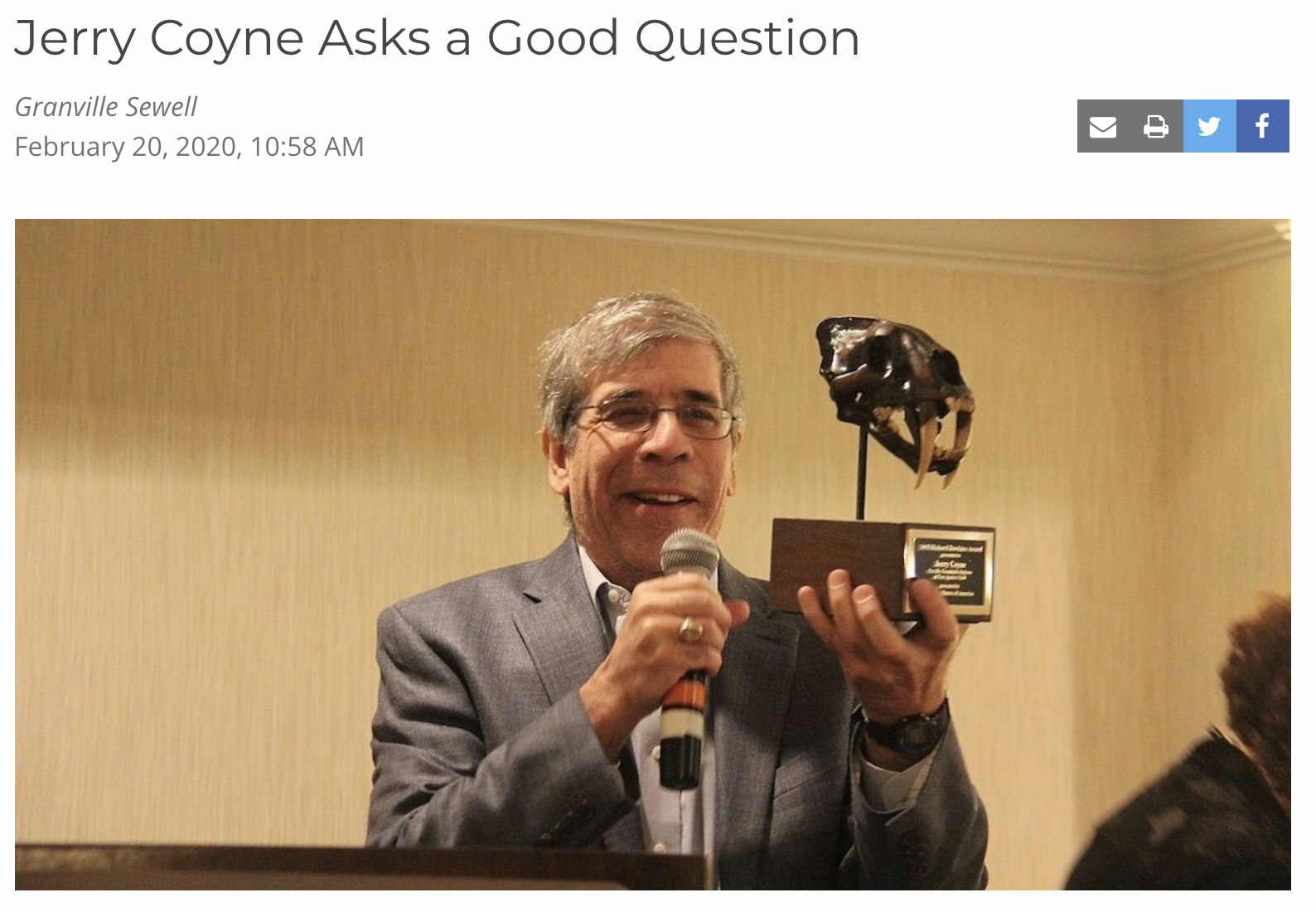 A good question? (I swear that they keep banging on about me because I’ll bring them clicks!). What is it?

Actually, it’s a bit confusing because they deal with two questions I asked.

Still, when we argue with atheists like Jerry Coyne, we may become frustrated and wonder why God didn’t just create all species simultaneously 10,000 years ago as some creationists believe, and make doubt impossible.

These are not the same question, though they both bear on whether we see evidence of God’s presence or of his handiwork.  I think Sewell is dealing mostly with the first one in his post, but does answer the second one—sort of:

But even if you believe that God has to create through testing and improvements for the same reasons we do, and that just because something is designed doesn’t mean it can never go wrong (which addresses the main question in my Epilogue, why do bad things happen to good people), we still have to think that God has intentionally passed up a lot of opportunities to end the debate about his existence and silence all doubters.

In other words, all the species on the planet that have gone extinct simply represented God trying things out and then winnowing out the bad designs (nearly all of them during the end-Permian extinction)! Why did the passenger pigeon fail?

But then where do the new and very different species come from?  If they were created de novo, or tweaked by God somehow using evolution as his method, then we are back to creationism, de novo or gradual. But seriously, even though both God and humans are intelligent, there’s no reason given why God, who is supposedly omnipotent and omniscient, had to “test” the animals and plants and then, if they didn’t pass muster, extirpate them!

That’s a pretty lame answer, but it’s theology, Jake. But on to the Big Question: why is God hiding from us? (Whenever I think of this question, I think of philosopher Delos McKown’s answer: “The invisible and the non-existent look very much alike.”)

To see his answer, Sewell refers us to a previous article of his at Evolution News, “The biggest theological objection to design“, which is far more about theodicy—why does God allow natural and moral evil?—than about why God is hidden.

The issue of theodicy, which Sewell resolves by saying that evil is a necessary byproduct of good, is difficult to read, for Sewell recounts the slow and painful death of his wife (they had two young kids) from nose and sinus cancer. One could ask “well, couldn’t God just eliminate cancer?”, but Sewell uses a Mother Teresa gambit: suffering has its benefits. My response—and I’m not trying to be churlish here—is “Does the benefit of your wife’s suffering outweigh the tragedy of her loss and the fact that your children are motherless? Wouldn’t you rather have your wife back than have her dead but having learned lessons?” I will leave that answer to Sewell.

Does Sewell answer the question of why God doesn’t show himself? He does say that he believes in some miracles, even though he touts the hegemony of natural law (which doesn’t jibe with his approbation of intelligent design and repeated creations):

I do believe that God has intervened in human and natural history at times in the past, and I would like to believe he still intervenes in human affairs, and even answers prayers, on occasions, but the rules at least appear to us to be inflexible.

But all it would take is ONE BIG MIRACLE, of the type I describe in Faith Versus Fact (p. 119)—a miracle that was taped and documented worldwide—to make me believe in a divine being—provisionally, of course, as it might be due to space aliens or some trick.  Why can’t we at least have that?

Well, here’s the reason Sewell gives why God is hidden:

Why does God remain backstage, hidden from view, working behind the scenes while we act out our parts in the human drama? This question has lurked just below the surface throughout much of this book, and now perhaps we finally have an answer. If he were to walk out onto the stage, and take on a more direct and visible role, I suppose he could clean up our act, and rid the world of pain and evil — and doubt. But our human drama would be turned into a divine puppet show, and it would cost us some of our greatest blessings: the regularity of natural law which makes our achievements meaningful; the free will which makes us more interesting than robots; the love which we can receive from and give to others; and even the opportunity to grow and develop through suffering. I must confess that I still often wonder if the blessings are worth the terrible price, but God has chosen to create a world where both good and evil can flourish, rather than one where neither can exist. He has chosen to create a world of greatness and infamy, of love and hatred, and of joy and pain, rather than one of mindless robots or unfeeling puppets.

The big flaw here is that god could walk out onstage, show us that he exists, and then not take on a “more direct and visible role.” He could just convince us he exists, and then go back to Heaven, put his feet up on a cloud, and quaff a bottle of 1961 Lafitte. This would NOT turn life int a divine puppet show: things would go on pretty much as they did before, but with more religious people and maybe a bit more good behavior. After a while, things would get pretty much back to normal, and science, which depends on “natural law”, would go on as before. Sewell’s point about us being “puppets” is irrelevant here: we could see God and still believe that we have free will and so on.  God could make a cameo appearance, let most of us believe in him (if we’re convinced; Muslims and Hindus wouldn’t be, perhaps), and then bugger off. Presumably that would go a long way to meeting what Christians want to see.

So while Sewell’s second essay explains—though not to my satisfaction—why there is evil in the world, it doesn’t even come close to saying why God remains hidden.