I have to admit that Maggie Ryan Sandford is much braver than I. In the article below from Nature, and in the short video embedded in it (I put it below), she dons a sandwich board that says, “Ask me anything about evolution,” and parades around the Minnesota State Fair.  (Sanford is identified as “a science communicator and author of the 2019 book Consider the Platypus: Evolution through Biology’s Most Baffling Beasts.”)

You can read her short piece by clicking on the screenshot below:

Clearly her object was to engage people in a discussion about evolution, and the implicit aim was to convince them that evolution is true. In the process, she says she learned some lessons about how to change people’s minds (sadly, that aim isn’t spelled out clearly.)

It didn’t hurt that Sanford answered “yes” when people asked her, “Do you believe in God?”, as a “no” would certainly turn away people bent on having a good time at the fair. But here are the lessons she said she learned from this perambulation:

. . . as a science communicator and former education researcher, I knew that, in matters of deep personal belief, facts matter less than feelings. The need to identify whom you’re dealing with is a natural human instinct. Answering was the only way to unlock the rest of the conversation. So I simply let people know I was a big fan of the globe and everything on it, and that I’d written a book about animals that I hoped people would find inviting.

And so to her three lessons:

Lesson 1: Don’t argue with beliefs. People tend to incorporate facts that align with their belief systems.

No problem. I just had to find topics that made sense to all of us — pro-and anti-evolution alike. Dogs or livestock breeding, for example. Half the folks within a 30-metre radius were there to showcase their carefully bred cows, horses and chickens. Open-faced and genuine, I invited them to school me on the areas of their expertise. Which, it turns out, is evolution.

I agree. If you’re there to change people’s minds, don’t mix anti-theism with pro-evolutionism. And if you can change the mind of a cow breeder by telling her that she’s actually practicing evolution by artificial selection, so much the better; but Sanford doesn’t say that she changed anybody’s mind!

Lesson 2: Listen. The most challenging group of the day consisted of two men and a woman in their late twenties. The men were just looking for a fight. Telling me why I was wrong was, I supposed, a way of asking me about evolution. I asked them to elaborate, to tell me why it was that they found evolution hard to swallow. This led to their female companion insisting: “She listened to you. Now you listen to her.” In the end, one man explained my points to the other. “She’s saying evolution is mutations in our DNA,” he said, forcing his companion to let him finish. “I’m just saying, I get her side.”

Agreed again. You can’t get in people’s face and hector them about evolution: you’d be acting like a Darwinian Elizabeth Warren. And if people are open-minded, then of course you should hear them out and answer them patiently, especially if you’re wearing a sandwich board that invites a give-and-take. But again, was anybody’s mind changed?

Lesson 3: Learn what people really think. Almost everyone — secular and religious — had misconceptions about evolution. Advocates of evolution often hadn’t learnt that evolution can now be tracked in genomes, not just fossils, and that humans are related to all living things, and that we didn’t come from apes because we are apes (keep in mind, ‘ape’ is a word that humans made up).

It’s extremely useful to learn what the most common misconceptions are about evolution (e.g., “in evolution, everything happens by accident”). This way you can prepare yourself for what you’re about to encounter, and have some ready answers.

Finally, Sandford avers that the ability to relate to another person as a fellow human is key in helping them accept evolution:

Lay people are more likely to trust and engage with science when they learn that researchers are human beings, fallible and conflicted. Yet somehow it seems hard for many in the scientific community to show those qualities to others. A common concern is that, in the anti-evolution, anti-science debate, any whiff of disagreement or uncertainty spells doom for scientific arguments.

When I began this ‘experiment’, my hypothesis was that a willingness to show vulnerability — to show that we science folks are willing to listen and receive criticism — boosts credibility, not the opposite. I think my experience supports that. When feelings speak louder than facts, appealing to feelings can actually work in favour of science.

I’m not sure what it means to “receive criticism” when you have the truth on your side, as Sandford does, but perhaps she means only that you should listen to people’s beefs about evolution.

But, as I’ve said several times, Sandford doesn’t mention whether she actually changed any minds—not one. What she did seem to learn is that religion is the biggest block towards accepting evolution:

But the misconceptions of religiously inclined folks often had greater personal significance. Listening to them, it became clear that they considered evolution an attack on all they held dear. Several asked me about a narrative they’d heard somewhere about how “life began when water was dripping on a rock”. Clearly, they were worried that such a narrative undercut the idea that humans were created in the image of God.

And indeed, you don’t even have to be especially religious to consider evolution an attack on your worldview—although it helps. Evolution undermines human exceptionalism and our self-image in many ways. In the book below, which I recommend, Steve Stewart-Williams goes through all of these ways (click on screenshot to go to the Amazon site): 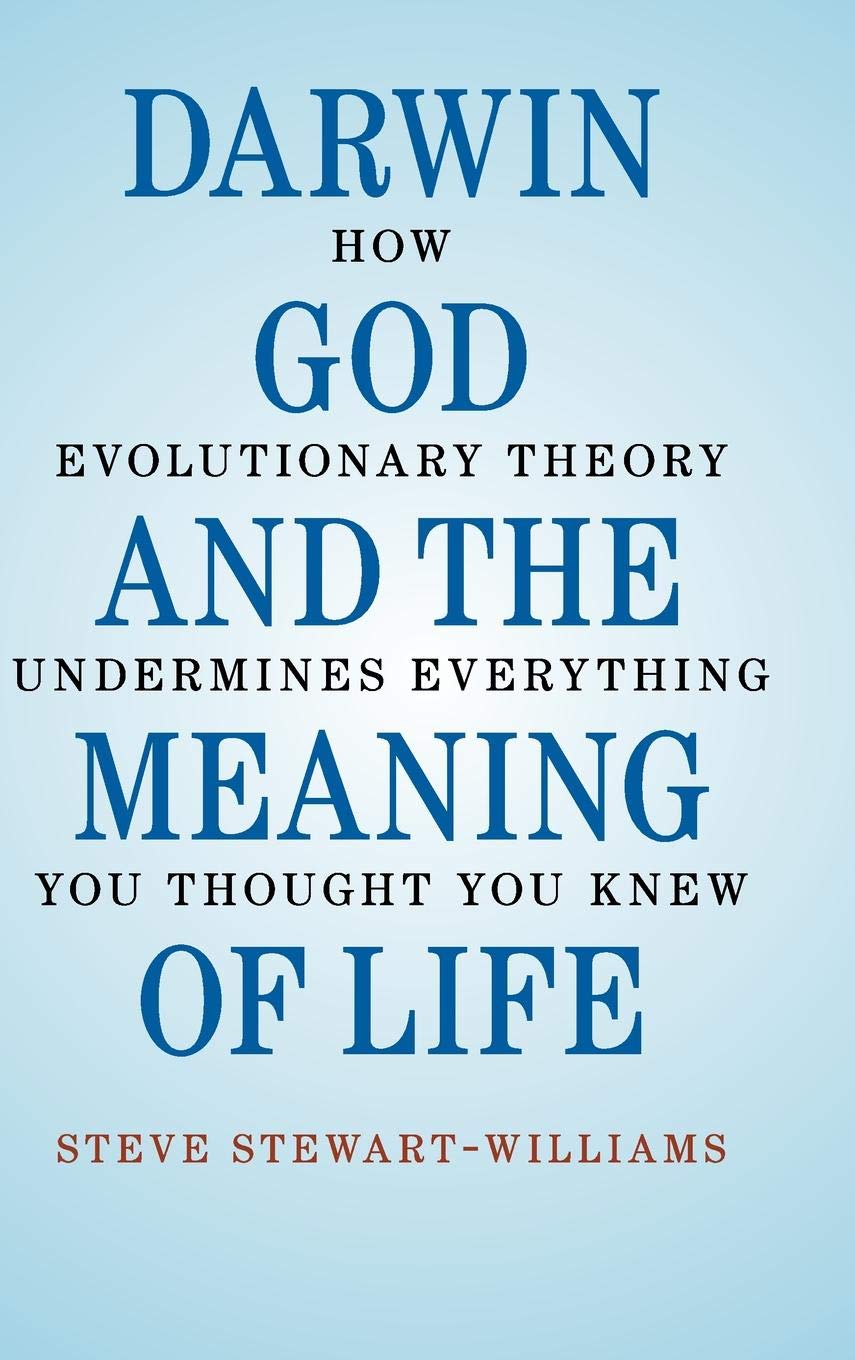 And here are two of the slides I use when explaining why Americans are scared of evolution; many of the points are from Stewart-Williams’s book (and I credit him when I show these slides). The red bits are implications that I consider especially important in turning people off evoution: 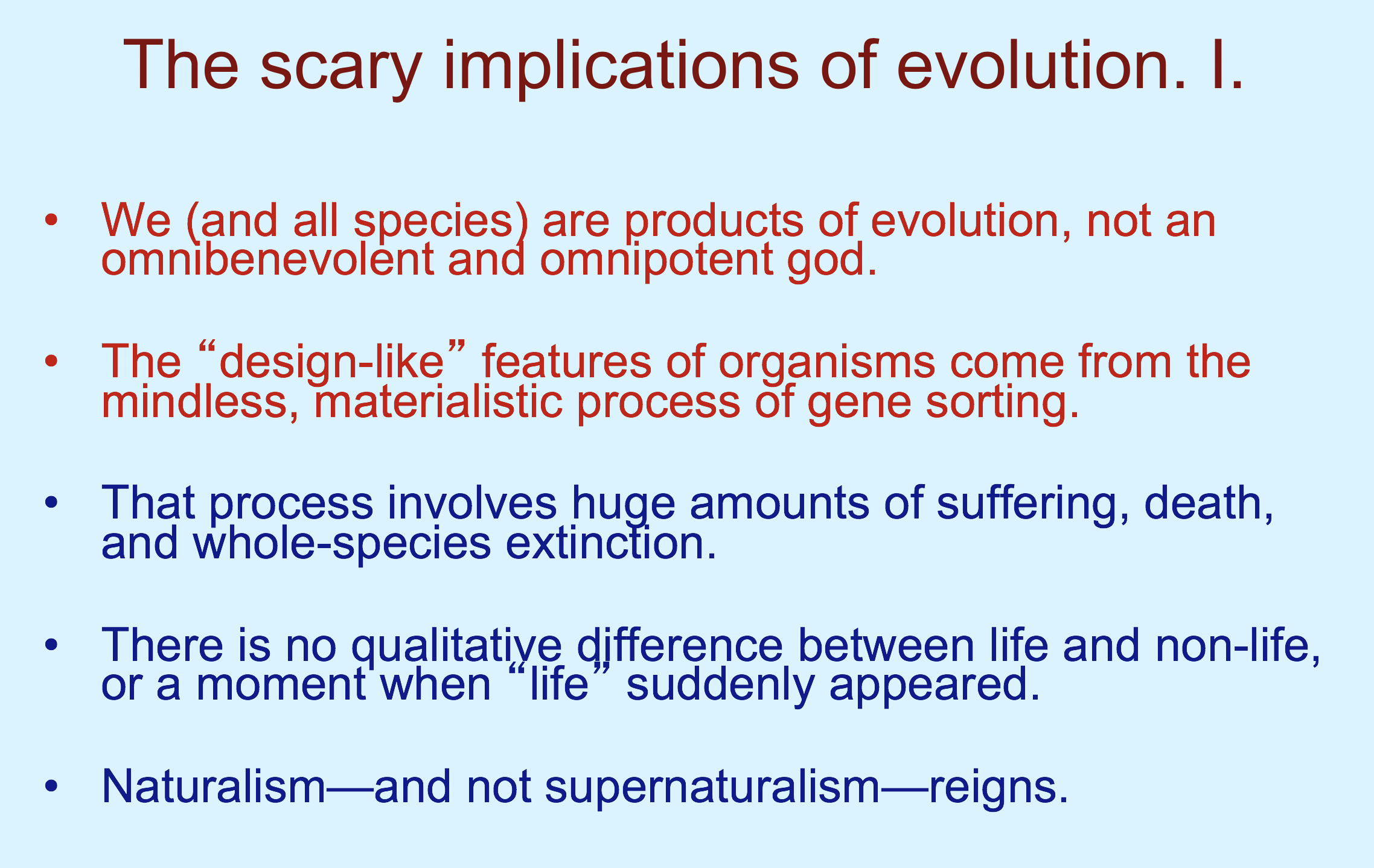 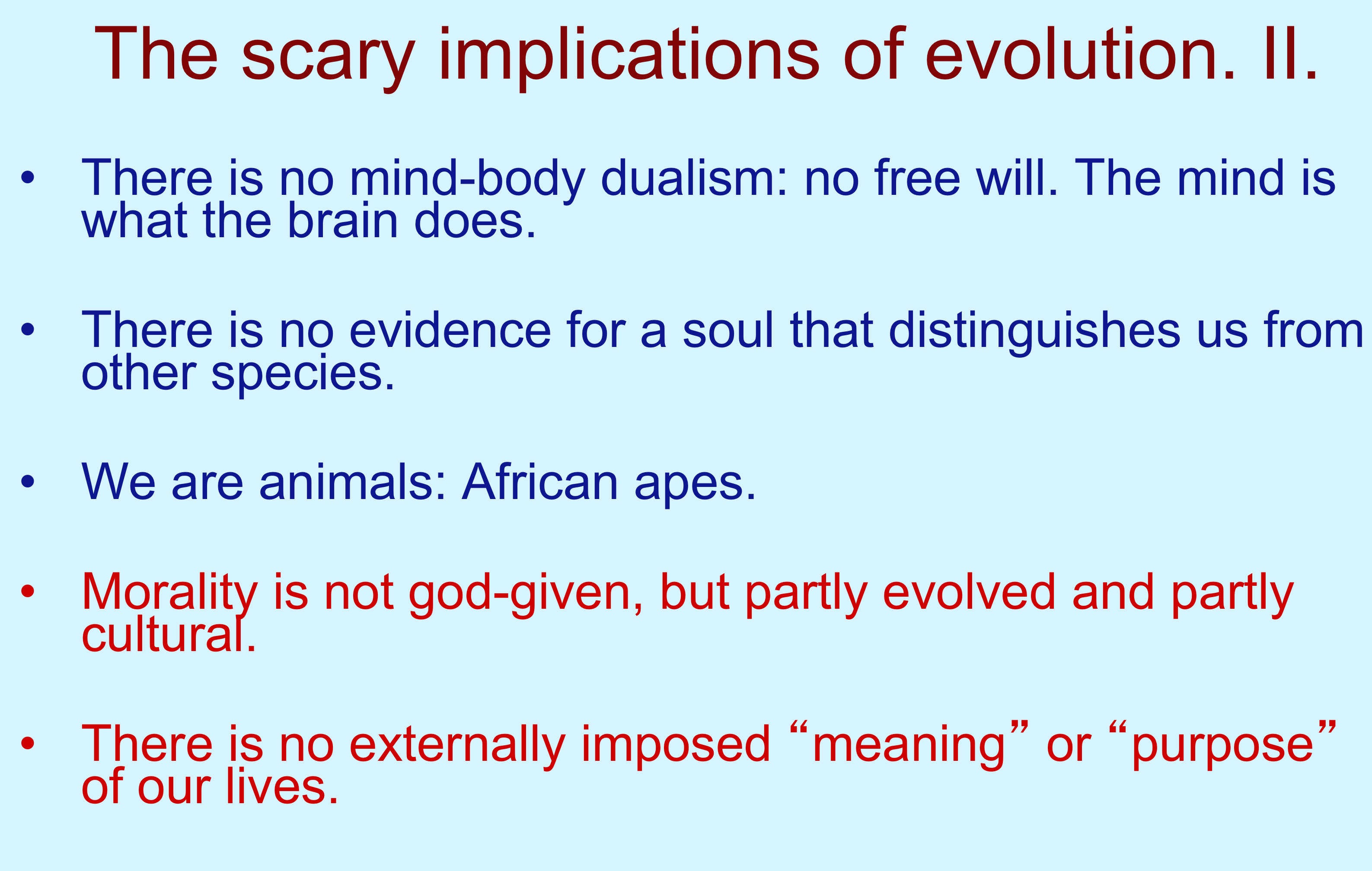 In general, while teaching facts about evolution does work, as I know from the email responses I got to the book Why Evolution is True, American remains obdurately anti-evolution, with only 22% of us accepting naturalistic evolution for humans compared to 40% being young-earth creationists and 33% theistic evolutionists (those who think God intervenes in the process, especially in the origins of humans). In other words, 73% of us have a supernaturalistic view of evolution—more than three times the frequency of those who accept “Darwinian” naturalistic evolution as it’s taught in biology class.

In the end, the vast majority of opposition to evolution comes from religion. The more religious the country, the less acceptance of evolution. Religion immunizes people, at a every young age, against evolution, for they get their faith before they learn about biology. As I always say, if I could do just one thing to increase the acceptance of evolution in America, it would be “make religion vanish.”

That is a hard job, and will take decades or even centuries. And it’s why I wear two hats, one as an evolution teacher and promoter, and the other as an anti-theist. I’m not sure that Maggie Sandford’s strategy works, as she seems to go light on the facts and completely avoids criticism of faith. It’s no surprise that she doesn’t boast about her victories at the Minnesota State Fair!

But I’d be churlish to tell her to lay off, because she may well be planting seeds of doubt in people—seeds that may sprout only much later. So Ceiling Cat bless her for having the courage to parade her views in public and invite criticism. I do wish her success.