Every parent I know with whom I’ve discussed the issue of sex differences has told me that, if they have children of both sexes, they notice behavioral differences between boys and girls quite early, and these include preferences for which toys they play with. Usually, but not inevitably, boys play with “boy toys” (trucks, trains, guns, soldiers) and girls prefer “girl toys” (dolls, kitchen stuff, tea sets, art stuff). Even when girls are given trucks and boys given dolls, they gravitate to the stereotyped toys. I’m using the classification employed by authors whose work is summarized in the meta-analysis I’m discussing today: the paper by Davis and Hine).

But there’s some evidence for a genetic component to this preference: the fact that rhesus monkeys, who presumably don’t get socialized by their parents, show a similar difference in toy preference, even when tested as adults. The monkey paper is shown below (click for free access). A BBC site implies that a related study with similar results was also done in Barbary macaques, a different species; but I can’t find any resulting publication. (UPDATE: The same result has been seen in vervet monkeys, as a reader notes in the comments.) 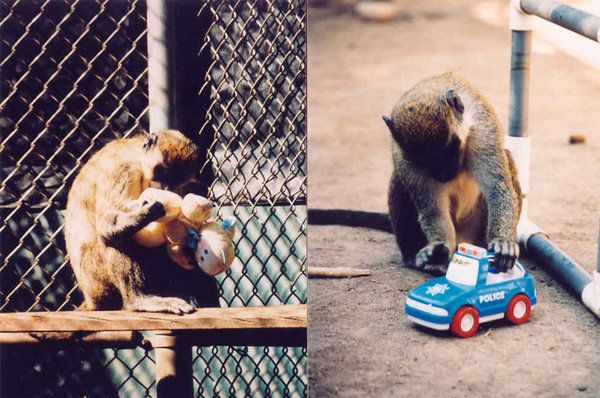 And the abstract from the rhesus macaque study (my emphasis)

Socialization processes, parents, or peers encouraging play with gender specific toys are thought to be the primary force shaping sex differences in toy preference. A contrast in view is that toy preferences reflect biologically determined preferences for specific activities facilitated by specific toys. Sex differences in juvenile activities, such as rough and tumble play, peer preferences, and infant interest, share similarities in humans and monkeys. Thus if activity preferences shape toy preferences, male and female monkeys may show toy preferences similar to those seen in boys and girls. We compared the interactions of 34 rhesus monkeys, living within a 135 monkey troop, with human wheeled toys and plush toys. Male monkeys, like boys, showed consistent and strong preferences for wheeled toys, while female monkeys, like girls, showed greater variability in preferences. Thus, the magnitude of preference for wheeled over plush toys differed significantly between males and females. The similarities to human findings demonstrate that such preferences can develop without explicit gendered socialization. We offer the hypothesis that toy preferences reflect hormonally influenced behavioral and cognitive biases which are sculpted by social processes into the sex differences seen in monkeys and humans.

But if you’re dealing with humans, where socialization is also a possibility, the first thing to ask is this: Do boys and girls really differ in their toy preferences? For if they don’t, there’s no need to adhere to either socialization or genetic hypotheses. Previous research has generally showed a difference in the expected direction, but it’s not observed 100% of the time, and some studies show no difference between boys and girls.

The purpose of the 2018 study I’m discussing today, shown below, was to perform a meta-analysis of many earlier studies investigating toy preference  to see if there are statistically significant differences between the sexes when looking at the overall data.(Click on screenshot to see the paper, get the pdf here, and reference is at the bottom). I’ll try to be brief, which is hard for such a long paper!

Methods: Meta-analysis is a statistical way to combine the results of different studies, even if they use different methods. What the analysis looks for is an overall pattern among different studies: in this case, toy preferences between boys and girls. The paper of Davis and Hines, from the Gender Development Research Centre at the University of Cambridge, measures the sizes and direction of preference differences between the sexes and conducts overall tests of significance using the statistical package R.

To see if there was a pattern over time—you’d expect a decrease over the years if socialization had decreased—they looked at the relationship between the year a study was published and the size of any sex-specific preferences. Since schools and parents are now making a big effort to socialize kids against playing with sex-specific toys, one might expect the preference to decrease over the five decades of the work included in the meta-analysis.

Finally, the authors tested whether the degree of preference changed with the child’s age. If preference is due to socialization, one might expect an increase with age, but one might also expect the same thing if hardwired differences simply take time to show up.

The authors plowed through 3,508 studies that initially looked relevant, eliminating the vast majority because they didn’t satisfy the authors’ criteria. This pruning wound up with 75 toy-preference studies included in the meta-analysis.

The age of children among studies ranged from 3 months to 11 years, and a variety of different tests were done, including “free play” (children were given a group of toys and allowed to choose ones to play with “in an unstructured way”), “visual preference” (children were shown images of toys and the amount of time they spent looking at a toy was a measure of their interest in it), “forced choice” (usually a child is forced to choose between two pictures of toys, one a “girl’s toy” and one a “boy’s toy”), and “naturalistic choice” (what kind of toys children own; the authors did not use studies in which children’s collections of toys reflected their parents’ buying habits rather than what children asked for).

Toys were classified by the experimenters, and the authors avoided studies in which classification was done post facto (that is, any toys preferred by boys were subsequently classified as “boy toys” and the same for girls.

Here’s the graph they give of how toys were classified among the various experiments. The bars represent the frequency in the 75 studies in which a given kind of toy was classified as a boy’s toy (black bars), a girl’s toy (light gray bars) or a “neutral” toy (medium-gray bars):

The results were clear and their significance high; you can read the paper to see more:

1.) There were large and highly significant average differences between the two sexes in preference for both boy-related and girl-related toys. This was in the “expected” direction. As I note above, this doesn’t tell you whether girls prefer girl-toys over boy toys or boys prefer boy toys over girl toys; it just says that there’s an overall difference between the sexes in their preference for one class of toy versus the other. BUT. . . .

2.) Within boys, boys preferred boy toys more than girl toys. And within girls, girls preferred girl toys more than boy toys. The overall sex difference, then, is the result of each sex preferring in general the toys considered “appropriate” for that sex.”

5.) In three out of four analyses, the degree of preference increased with the age of the child. The only exception was the size of girls’ sex-specific preference for girl-related over boy-related toys, which showed no significant change.

Finally, and the one result that bears on the “genes versus socialization” hypotheses:

6.) The year of publication showed no relationship with the gender difference. Boys preferred boy toys over girl toys, and girls girl toys over boy toys, to the same extent over the 5 decades of studies. This was true of all four ways of measuring sex difference; in no case did the significance of the temporal relationship drop below 0.103 (it has to be below 0.05 to be considered significant).  This goes counter to what is expected if “socialization” had decreased in the last 50 years, for child preference would also have been expected to decrease if that preference was due to society’s enforcing standards and stereotypes on children’s toy affinity.

What does it all mean?  On the face of it, all this study shows is that there are consistent differences in toy preferences between boys and girls, with each sex preferring the sex-specific toys labeled by the previous experimenters. Methodology does influence the degree of preference, but there is a strong and consistent preference in the expected direction.

That in itself says nothing bearing on whether toy preference is innate, the result of socialization, or a mixture of both. But two facts imply that a reasonable amount of toy preference is innate. The first is the results of the macaque studies, showing similar preference for vehicles over plush toys in one (or maybe two) studies. Since macaques don’t adhere to a human-like patriarchy, nor do they ever see toys before the tests are done, this implies an innate sex-specific difference in preference.

The same holds for the lack of change in the degree of preference with time in the human studies. One might expect that preference would have decreased over the years given the attempts of parents (at least in much of the West) to avoid socializing their children into preferring “appropriate” toys. But that didn’t happen. However, I’m not sure whether anyone’s actually measured that decrease in socialization.

Finally, the fact that preference seems to be present at very young ages, when socialization is seemingly impossible, may be evidence for an innate component to preference. However, the preference increases with age, and one might say that this trend reflects socialization. And blank slaters might claim that covert or unknowing socialization is going on right from birth.

In the end, I find the evidence from the macaques the most convincing, but I have a feeling that human children, whose preferences parallel those of macaques, are also showing preferences based in part on evolution. Studies in other primates would be useful (do our closer relatives like gorillas and chimps show such preferences?) as well as more studies of very young children, perhaps using children brought up in homes where socialization is deliberately avoided.

114 thoughts on “Gender differences in toy use: boys play with boy toys, girls with girl toys”