The article at hand was published by the Institute of Art and Ideas, a British organization that I hadn’t heard of but is described by Wikipedia thusly:

The Institute of Art and Ideas is an arts organisation founded in 2008 in London. Its programming includes the world’s largest philosophy and music festival, HowTheLightGetsIn and the online channel IAI TV, where talks, debates and articles by leading thinkers can be accessed for free, under the slogan “Changing How The World Thinks.”

I then remembered that they invited me to that festival a few years back, but expected me to pay my own way, which I won’t do just to help them fund their endeavors. But I will point to this article on their website by Bernardo Kastrup, identified as a “Dutch computer scientist and philosopher who has published fundamental theoretical reflections on the mind matter problem.” I have to say that if you go to his site, which is the link at his name, you will find a considerable amount of hubris! But amuse yourself later.

Kastrup is quite critical of panpsychism, and for good reasons. But then, near the end of his piece, the whole argument goes south. For Kastrup, while saying that panpsychism can’t help us understand the “hard problem of consciousness”, also claims that materialism can’t solve it either, and we need to posit that the entire universe (or, as Sean Carroll would say, the Big Wave Function) is conscious. And, like panpsychism, that’s crazy and untestable. It’s weird that a philosopher can so deftly dispose of a crazy theory but then fall under the spell of a different crazy theory. But read by clicking on the screenshot: 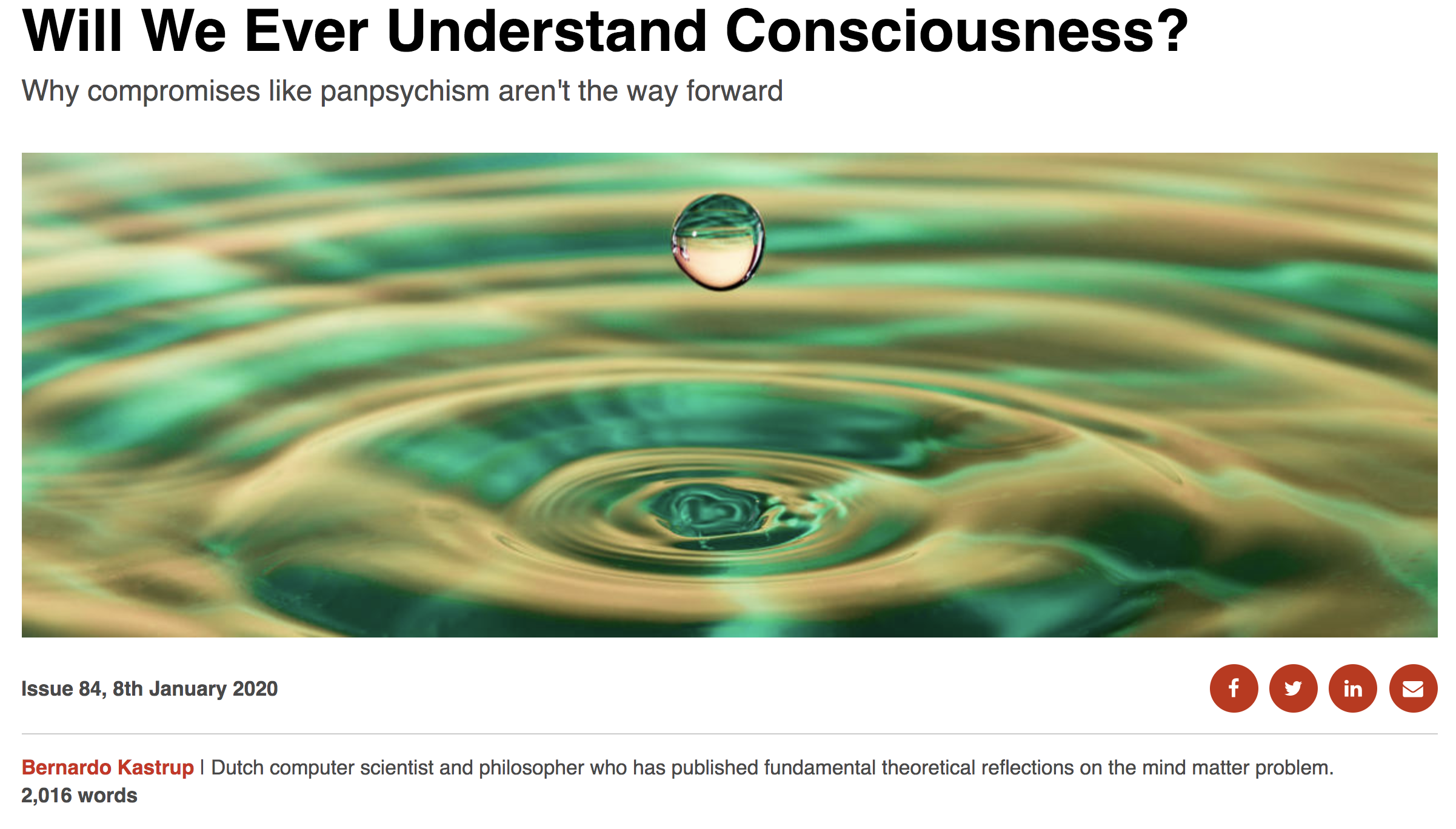 Kastrup’s beef is with the “combination problem” that I’ve highlighted before: how does the semi-consciousness of elementary particles (people like Philip Goff posit that the spin, charge, mass, and other properties of these particle are aspects of their “consciousness”—a semantic trick) combine to provide the “high level” consciousness of animals such as ourself? So far I haven’t seen a solution to this problem from panpsychists, only a bunch of handwaving.

Kastrup highlights the combination problem in a more physical way, involving the recognition that particles are not discrete, but aspects of the Big Wave function:

You see, I can easily accept that my cats are conscious, perhaps even the bacteria in my toilet. But I have a hard time imagining—especially when I am eating—that a grain of salt contains a whole community of little conscious subjects. The panpsychist’s motivation for wanting even the humble electron to be conscious is to treat experiential states in a way analogous to how physical properties are treated in chemistry. As the physical properties of particles combine in atoms, molecules and aggregates to give rise to emergent macroscopic properties—such as the wetness of water—the panpsychist wants the experiential states of particles in our brain to combine and give rise to our integrated conscious inner life. The idea is to fold experience into the existing framework of scientific reduction and emergence. Therein resides most of the appeal and force of panpsychism.

To do so, the panpsychist takes subatomic particles to be discrete little bodies with defined spatial boundaries. This way, their respective experiential states are thought to be encompassed by such boundaries, just as our human experiences seem to be encompassed by our skull. Indeed, since each person’s consciousness does not float out into the world, but is personal in the sense that it is limited by the boundaries of the person’s body, so subatomic particles must be understood as discrete little bodies, each containing separate and independent subjectivities.

The panpsychist then posits that the inherent subjectivity of different particles can combine into compound subjects if and when the particles touch, bond or otherwise interact with one another in some undefined chemical manner. Notice that this approach makes sense only through analogy with physical properties. The mass of an electron is ‘held’ within the electron’s boundaries, therefore it’s only logical—the argument goes—that its experiential states should also unfold within the same boundaries. Or is it?

The problem is that subatomic particles aren’t discrete little bodies with defined spatial boundaries; the latter is a simplistic and outdated image known to be wrong. According to Quantum Field Theory (QFT)—the most successful theory ever devised, in terms of predictive power—elementary particles are just local patterns of excitation or ‘vibration’ of a spatially unbound quantum field. Each particle is analogous to a ripple on the surface of a lake. We can determine the location of the ripple and characterize it through physical quantities such as the ripple’s height, length, breadth, speed and direction of movement, yet there is nothing to the ripple but the lake. We can’t lift it out of the lake, for the ripple is merely a pattern of movement of the water itself. Analogously, according to QFT, an elementary subatomic particle is just a pattern of excitation or ‘vibration’ of an underlying quantum field. Like the ripple, we can determine the particle’s location and characterize it through physical quantities such as mass, charge, momentum and spin. Yet, there is nothing to the particle but the underlying quantum field. The particle is the field, ‘moving’ in a certain manner.

The only way around this issue, says Kastrup, is to posit that what is really conscious is the field that creates the particle itself. He explains why the panpsychist can’t coherently argue why experiential states belong to particles themselves, but then his argument begins to fall apart. Why? Because Kastrup says that even if the quantitative aspects of particles could combine to produce consciousness, they would produce consciousness only as a quantitative property, but consciousness is a qualitative property—the problem of quality:

. . . deducing quality from quantity is something entirely different. Experiential states are qualities; they cannot be exhaustively described in quantitative terms. No numerical parameter can tell someone with congenital blindness what it feels like to see red; or someone who never fell in love what it feels like to, well, fall in love. Indeed, this is precisely the so-called ‘hard problem of consciousness’ that plagues mainstream materialism and motivated the creation of panpsychism in the first place. One cannot make an unconscious quantum field give rise to a conscious particle for exactly the same reasons that one cannot make an arrangement of matter give rise to experience.

Dr. Kastrup doesn’t seem to realize that some day I think we’ll be able to stimulate blind people’s brains in the right way and then they will see red! We can already give them a very rudimentary experience of vision. Why is he so sure that the qualia of “red” is beyond scientific understanding?

As I wrote five days ago, on similar bases Patricia Churchland has pretty much knocked down the idea that we can’t understand the origin and mechanism of subjective sensations through a materialist paradigm. I refer you again to her excellent 2005 paper in Progress in Brain Research, “A neurophilosophical slant on consciousness research”,  available free at the link. Churchland thinks, and makes a persuasive case, that just because “qualia” (sensations) are “subjective”, that doesn’t put them beyond the reach of materialist explanation. The whole “consciousness is subjective and thus can’t be understood by a materialistic approach” argument is, it seems, a red herring.

Kastrup deep-sixes the panpsychism explanation, at least in terms of the constituents of the brain having some form of consciousness, but comes a cropper (I love that phrase!) when he tries to replace panpsychism with his own theory. For that theory is simply this: the entire universe—the “quantum field”—is conscious. This, he thinks, avoids the “combination problem.” He doesn’t seem to realize that it raises another problem: testability. Also, he looks a bit foolish when he criticizes materialism, which is the only way we have ever been able to understand the universe. Here’s what he says (I’ve put his definition of a “reduction base” at the bottom):

To circumvent materialism’s failure to explain experience, the panpsychist simply adds experience—with all its countless qualities—to the reduction base. Arguably, this is a copout. Inflated reduction bases don’t really explain anything; they just provide subterfuge for avoiding explanations. A good rule of thumb is that the best theories are those that have the smallest base, and then still manage to explain everything else in terms of it. On this account, panpsychism just isn’t a good theory.

Good alternatives to materialism are those that replace elementary particles with experiential states in their reduction base, as opposed to simply adding elements to it. We call this class of alternatives ‘idealism.’ And then the best formulations of idealism are those that have one single element in their reduction base: universal consciousness itself, a spatially unbound field of subjectivity whose particular patterns of excitation give rise to the myriad qualities of empirical experience. Under such a theory, a unified quantum field is universal consciousness.

There is nothing absurd about this theory; the common impression that there is is just a knee-jerk reaction of our current intellectual habits. As a matter of fact, the theory is arguably the most parsimonious, internally consistent and empirically sound view yet devised. Importantly, as I have extensively discussed elsewhere, idealism—unlike panpsychism—can explain how our private, personal subjectivities arise within universal consciousness. I therefore hope that the momentum gathered by panpsychism in both academia and popular culture is transferred, intact, to this uniquely viable avenue of inquiry, before the inherent shortcomings of panpsychism discourage—as they are bound to eventually do—those seeking an alternative to materialism.

So now we don’t have the combination problem nor the untenable idea that each particle has some unique consciousness or apprehension of the universe. All we need posit is that the entire universe is conscious.  But that nagging little problem remains: “In what sense is it conscious?  Oh, and there’s another issue: “How do we test your theory, Dr. Kastrup?”  For a theory that can be neither tested nor falsified is a theory that can be ignored, for it’s not a scientific or empirical explanation.

Now in the passage above Kastrup links to a big book he wrote, and I’m sure he’d point me to that to show why the Universe’s wave function is conscious. But I’m not reading it—not yet. For all I anticipate there is just another species of gobbledygook, or, as Churchland calls it, “hornswoggling.” If you want to read it, by all means do so and report back here.

I wonder why so many people these days are dissatisfied with materialism and science and are drawn to metaphysics, e.g., Tom Nagel, Tom Wolfe, Philip Goff and now Kastrup. You tell me!  One thing I know: Kastrup is in good company. These are from his website:

And a video (with Deepak) about why materialism is bunk.

How Kastrup defines the “reduction base” of theory (I’d call it the “turtle at the bottom”):

But because we can’t keep on explaining one thing in terms of another forever, at some point we hit rock-bottom. Whatever is then left is considered to be our ‘reduction base’: a set of fundamental or irreducible aspects of nature that cannot themselves be explained, but in terms of which everything else can. Under materialism, the elementary subatomic particles of the standard model—with their intrinsic physical properties—constitute the reduction base.