In most states of the Union, convicted felons have their right to vote abridged in one way or another. (In 1974 the Supreme Court affirmed that the voting rights of convicted felons was a matter for states to decide.) The figure below shows the restrictions in place at present (only Maine and Vermons allow convicted felons to vote freely—even in prison). In many states you can regain your voting status after you’re out of jail, but often it’s not easy, and you have to wait until you’re off probation and through with your parole.

Here’s a summary of the situation from PrisonFellowship.org:

There is great variety in how states approach restricting voting rights based on criminal history. However, nearly every state restricts a person’s right to vote due to conviction for a felony crime. Only two states, Maine and Vermont have no restrictions on voting rights and allow individuals to vote in prison. The other thirty-eight states, along with the District of Columbia, temporarily suspend the right to vote for those convicted of a felony crime during the period of their sentence. In some states, the voting rights of these individuals are automatically restored when their sentence is completed. In other states, the legislatures have chosen to require waiting periods or an application before a person’s voting rights may be restored. Only three states, Kentucky, Virginia, and Iowa, permanently revoke a person’s right to vote based on a felony conviction. Of those states, Virginia recently acted to extend the opportunity for clemency to those with a felony conviction who meet certain criteria.

In states that allow restoration of voting rights, the process by which a person has their voting rights restored can be complex. The procedure of registering to vote after disenfranchisement generally includes lengthy paperwork to be correctly filed through state agencies, sometimes including unintended waiting periods even for automatic restoration as a result of insufficient resources in state agencies. 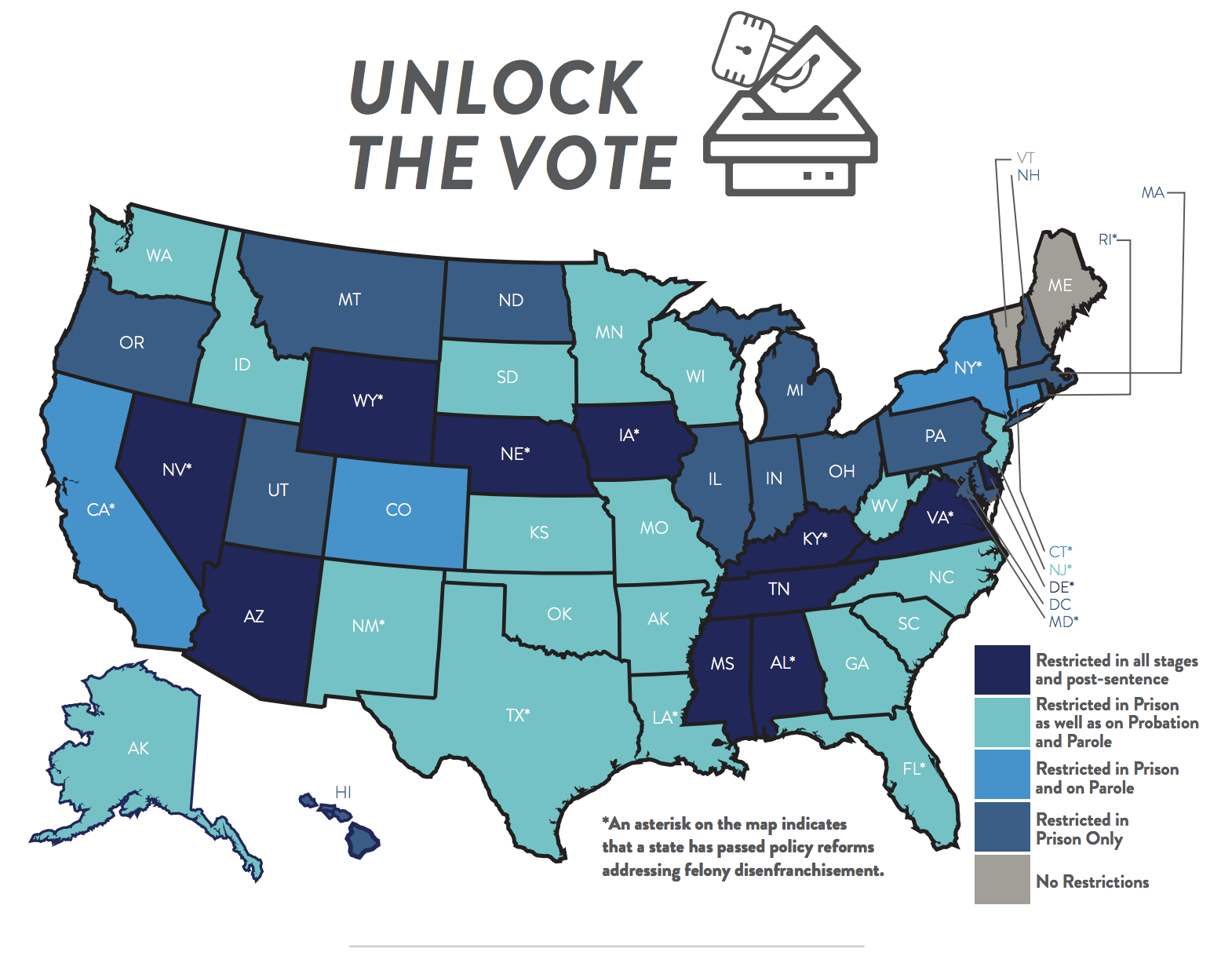 This removal of voting rights in the U.S. is called “felony disenfranchisement”. Although only Maine and Vermont allow imprisoned people to vote regardless of their crime, that is the standard practice in many European countries, including Croatia, the Czech Republic, Denmark, Finland, Germany, Ireland, Latvia, Lithuania, Montenegro, North Macedonia, Serbia, Spain, Sweden, Switzerland, and Ukraine.

I see no rationale for disenfranchisement of anyone convicted of a crime, however horrible or regardless of whether they’re in prison. The easiest decision is for the three states that remove your right to vote for a lifetime if you’re a convicted felon—even after release. But if you’ve “paid your debt to society,” as they say, why should you be deprived of civil rights, including the important right to determine who governs you? (Some states also restrict your ability to be on a jury.) Or, if you’re on probation or parole, should you really not be able to vote? One might say that you’re still under legal sanction, but if you can hold a job, and you’re still a citizen, why shouldn’t you be able to vote? After all, you still must live under the laws, you’re in a democracy, and on what grounds are you to be deprived of choosing those responsible for making laws?

And, for that matter, why shouldn’t you be able to vote while in prison? You are still an American citizen (unless you’re an imprisoned foreign national), and voting is a civil right for Americans.

Depriving prisoners, convicts, or parolees of that right serves no function I can see: it’s not a deterrent, it doesn’t help reform the convict (who, after all, reforms so they can get to vote?), and it doesn’t further sequester them away from the rest of society. It seems to me, then, that deprivation of voting is purely retributive punishment, and serves no societal function nor helps the convicted in any way. It is a way of injuring somebody for something they couldn’t help. As a pure determinist, I still see that sequestration, reformation, and deterrence are valid reasons to punish people, often by incarcerating them, but I see no justification for retribution in a humane and rational society.

71 thoughts on “Give convicted felons the right to vote”