On December 12 I reported on what has to get the award for Dumbest Pecksniffery of 2019. A group of 16 computer scientists wrote a letter to Nature saying that their colleagues (and everyone) should stop using the phrase “quantum supremacy”, a term that refers to the ability of a quantum-computing device to do what conventional computers simply cannot. The language police, always sniffing about for something to condemn, decided that the word “supremacy” was unpalatable: the title of their Nature letter was “Supremacy is for racists—use ‘quantum advantage’.” (I see the title has now been changed to simply “Instead of ‘supremacy’ use ‘quantum advantage.” That already shows they knew they overstepped.)

At any rate, here’s a bit of the Pecksniff’s plaint:

In our view, ‘supremacy’ has overtones of violence, neocolonialism and racism through its association with ‘white supremacy’. Inherently violent language has crept into other branches of science as well — in human and robotic spaceflight, for example, terms such as ‘conquest’, ‘colonization’ and ‘settlement’ evoke the terra nullius arguments of settler colonialism and must be contextualized against ongoing issues of neocolonialism.

You don’t have to be a genius to know where this language policing is going to go: into trying to purge from English every word that has any connection, however tangential or irrelevant, to oppression of “minoritized peoples.”  Steve Pinker, who works with language, immediately called this out in a series of tweets: 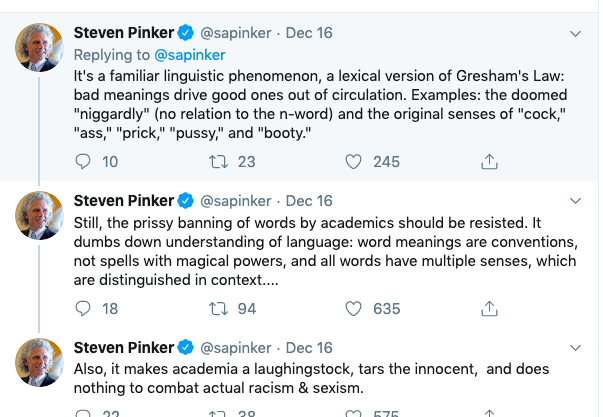 Besides the invidious behavior of those so quick to sniff out innocent language as ideologically impure, Steve’s last point is salient: the sniffing “does nothing to combat actual racism and sexism.” Because, really, does the use of the term “quantum supremacy” somehow further racism and sexism? Of course not, and so its elimination will do nothing to mitigate them.

The true test of whether social-justice warriors are really combatting oppression is to ask this question: if we followed their prescriptions, would oppression be materially reduced? For cases like eliminating General Tso’s chicken because it’s not cooked properly, the elimination of the word “niggardly” (see above, and yes, that word is doomed), and virtually all cases of “cultural appropriation”, the answer is “no.” This is virtue signaling, pure and simple. And “prissy” is an appropriate descriptor.

Scott Aaronson, who knows a thing or two about quantum computing, weighed in on the kerfuffle on his website Shtetl-Optimized, and you can see his take (he agrees with Pinker) by clicking on the link below:

In this context, the trouble with obsessing over terms like “quantum supremacy” is not merely that it diverts attention, while contributing nothing to fighting the world’s actual racism and sexism. The trouble is that the obsessions are actually harmful. For they make academics—along with progressive activists—look silly. They make people think that we must not have meant it when we talked about the existential urgency of climate change and the world’s other crises. They pump oxygen into right-wing echo chambers.

But it’s worse than ridiculous, because of the message that I fear is received by many outside the activists’ bubble. When you say stuff like “[quantum] supremacy is for racists,” what’s heard might be something more like:

“Watch your back, you disgusting supremacist. Yes, you. You claim that you mentor women and minorities, donate to good causes, try hard to confront the demons in your own character? Ha! None of that counts for anything with us. You’ll never be with-it enough to be our ally, so don’t bother trying. We’ll see to it that you’re never safe, not even in the most abstruse and apolitical fields. We’ll comb through your words—even words like ‘ancilla qubit’—looking for any that we can cast as offensive by our opaque and ever-shifting standards. And once we find some, we’ll have it within our power to end your career, and you’ll be reduced to groveling that we don’t. Remember those popular kids who bullied you in second grade, giving you nightmares of social ostracism that persist to this day? We plan to achieve what even those bullies couldn’t: to shame you with the full backing of the modern world’s moral code. See, we’re the good guys of this story. It’s goodness itself that’s branding you as racist scum.”

In short, I claim that the message—not the message intended, of course, by anyone other than a Chu or a Marcotte or a SneerClubber, but the message received—is basically a Trump campaign ad. I claim further that our civilization’s current self-inflicted catastrophe will end—i.e., the believers in science and reason and progress and rule of law will claw their way back to power—when, and only when, a generation of activists emerges that understands these dynamics as well as Barack Obama did.

I’ve put links to the three entities mentioned in the last paragraph; I knew about Arthur Chu and Amanda Marcotte, but not the SneerClub.  And if you want to see what Scott is on about the word “ancilla”, read his post.

Scott’s interpretation of the criticism might be a tad overstated, but in essence he’s right: the Thought Police, if you don’t stop using “quantum supremacy” and similar words, will then tar you as a racist. They might not try to end the career of someone like Scott Aaronson, but they’ll always give him the stink-eye. And yes, because their criticism—and the Nature letter—are pure virtue-flaunting, their posturing really is a way to say, “See: we’re the good guys.”

Soon after Scott put up the post above, he added another one with some new thoughts contributed by Steve Pinker. Pinker was specifically addressing the name change of the conference “Neural Information Processing System” to “NeurIPS” because the acronym for the former, NIPS, conjured up in some people’s minds the word “nips”, which in some quarters is a shorthand for “nipples.” And of course that would be salacious!

Click on the screenshot to read what both Scott and Steve think about this:

Even if people with an adolescent mindset think of nipples when hearing the sound “nips,” the society should not endorse the idea that the concept of nipples is sexist. Men have nipples too, and women’s nipples evolved as organs of nursing, not sexual gratification. Indeed, many feminists have argued that it’s sexist to conceptualize women’s bodies from the point of view of male sexuality.

If some people make insulting puns that demean women, the society should condemn them for the insults, not concede to their puerility by endorsing their appropriation of an innocent sound. (The Linguistics Society of America and Boston Debate League do not change their names to disavow jejune clichés about cunning linguists and master debaters.) To act as if anything with the remotest connection to sexuality must be censored to protect delicate female sensibilities is insulting to women and reminiscent of prissy Victorian taboos against uncovered piano legs or the phrase “with the naked eye.”

Re the “quantum supremacy kerfuffle”, Pinker says this:

Any harm to the community of computer scientists has been done not by me but by the pressure group and the Symposium’s surrender. As a public figure who hears from a broad range of people outside the academic bubble, I can tell you that this episode has not played well. It’s seen as the latest sign that academia has lost its mind—that it has traded reasoned argument, conceptual rigor, proportionality, and common sense for prudish censoriousness, snowflake sensibility, and virtue signaling. I often hear from intelligent non-leftists, “Why should I be impressed by the scientific consensus on climate change? Everyone knows that academics just fall into line with the politically correct position.” To secure the credibility of the academy, we have to make reasoned distinctions, and stop turning our enterprise into a laughingstock.

To repeat: none of this deprecates the important effort to stamp out harassment and misogyny in science, which I’m well aware of and thoroughly support, but which has nothing to do with the acronym NIPS.

I think we have to take a stand when dealing with stuff like this, and refuse to accede to the wishes of the Virtuous Pecksniffs. We all know it’s easy to go along to get along, but there’s no going along just once. As Scott noted above, if you bow to the erasure of innocent words because you’re afraid of being called a racist or sexist, you’ve already put one foot on the road to Nineteen Eighty-Four. And that road has no end.

Not only should we refuse to go along, but we should give our reasons for not going along, as did Steve. There is genuine sexist and racist language that should be shelved because it does perpetuate harmful stereotypes, but NIPS and “Quantum Supremacy” are not in that category.