Good morning on Sunday, December 15, 2019. We have a chance of snow today, and it’s a bit chilly (22° F, -6° C). Botany Pond is frozen over, but Honey is down at the Mississippi Delta with her feet up, enjoying the warmth and eating grain.

It’s also Bill of Rights Day, celebrating Virginia’s 1791 ratification of the first ten amendments to the Constitution, which officially made enough states to make the Bill effectively part of the Constitution.  It’s also International Tea Day and Cat Herders’ Day,  celebrating those with difficult jobs, like these cowpokes (this is, by the way, the best commercial ever made, bar none):

There’s a scant nine shopping days left until the onset of the season’s best holiday: Coynezaa.

Stuff that happened on December 15 includes:

Here’s Guardroom with Monkeys by David Teniers. Wikipedia “unpacks” it:

Teniers combined the genres of singerie [JAC: Money scenes!] and guardroom scene in the composition Guardroom with monkeys (Private collection). At a first glance, the Guardroom with Monkeys is no different from other guardroom scenes. It is clear from the round moon above the door that the scene is set late at night. The off-duty monkeys have removed their armor, stowed their pikes and rolled up their company flag and placed it against the far wall. Like their human counterparts, the monkey soldiers are loitering about, some of them are drinking and smoking, others are playing games. At the door a cat wearing respectable civilian clothes is led into the room by two monkeys who restrain it. The contrast between the properly dressed cat and the bizarre outfit of the monkey soldiers, one of which is wearing a funnel on his head while another has an upturned pot on his head, raises doubt as to the legitimacy of the monkeys’ authority. As was customary in singeries, the dress and behaviour of the monkeys highlight the foolishness of human undertakings. Teniers may also have intended to criticize the bloated military in the Southern Netherlands in the 1630s.

Those who croaked on December 15 include:

Here’s a 60 Minutes piece on Hitchens, produced when he was undergoing cancer treatment:

And a collection of Hitchens in confrontational moments:

Meanwhile in Dobrzyn, Hili is resting in the basket where they normally keep the firewood:

A; Are you comfortable in this basket?
Hili: No, but I have to show somehow that I am in possession of it. 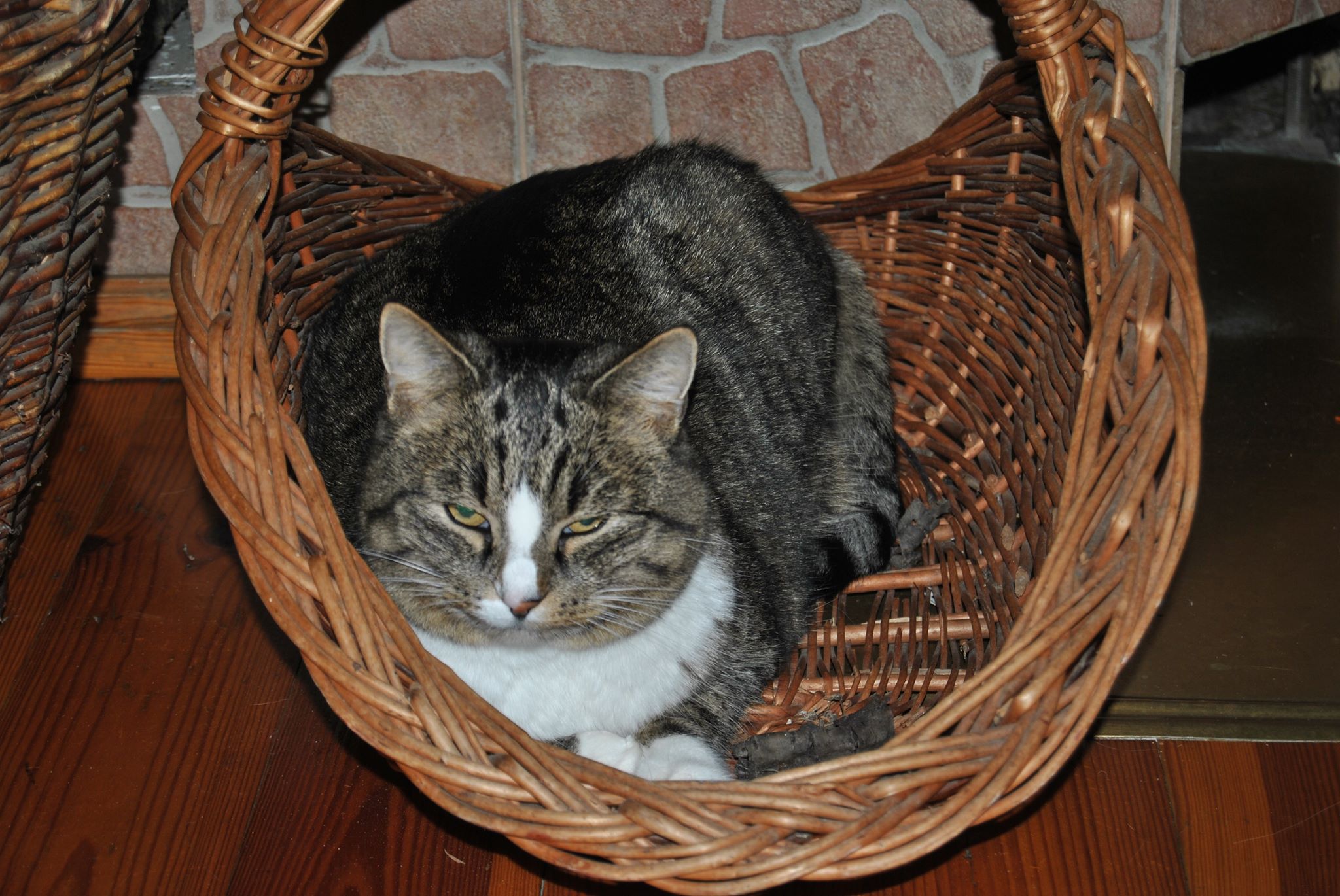 And in nearby Wloclawek, the loving brothers Mietek and Leon await their noms:

Leon: Do you think they are preparing our supper?

Another photo of the pair with Elzbieta’s caption: “The big brother washes the ears of the baby brother.”

Two “cat memes” from Jesus of the Day: 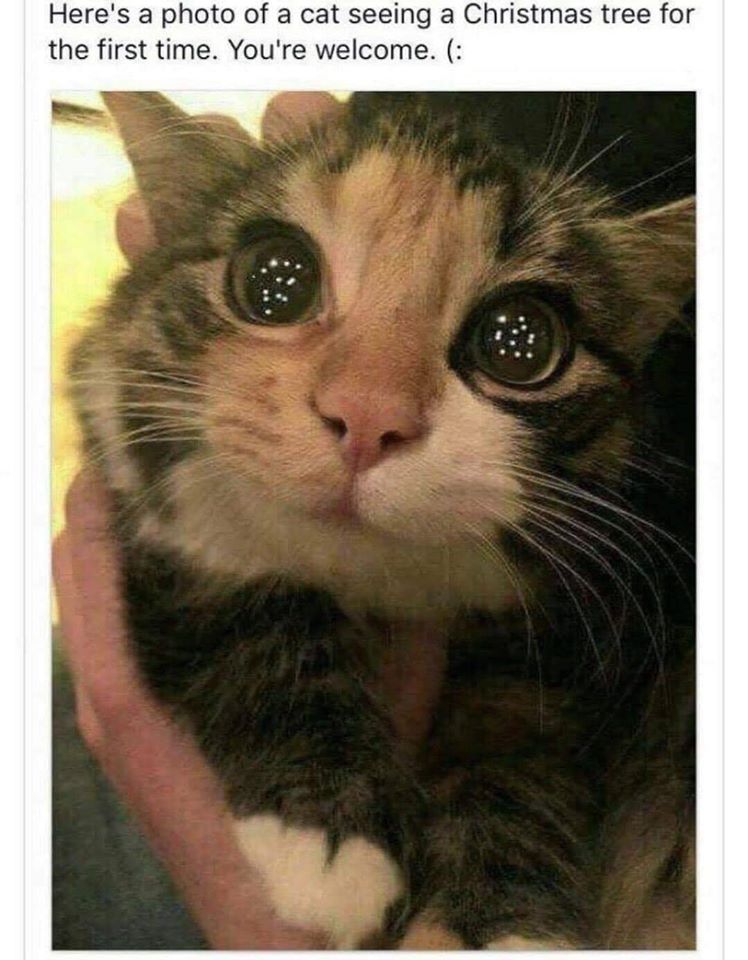 His eyes may be lit up now, but destruction is in them, too. . .

And this one contributed by Merilee: 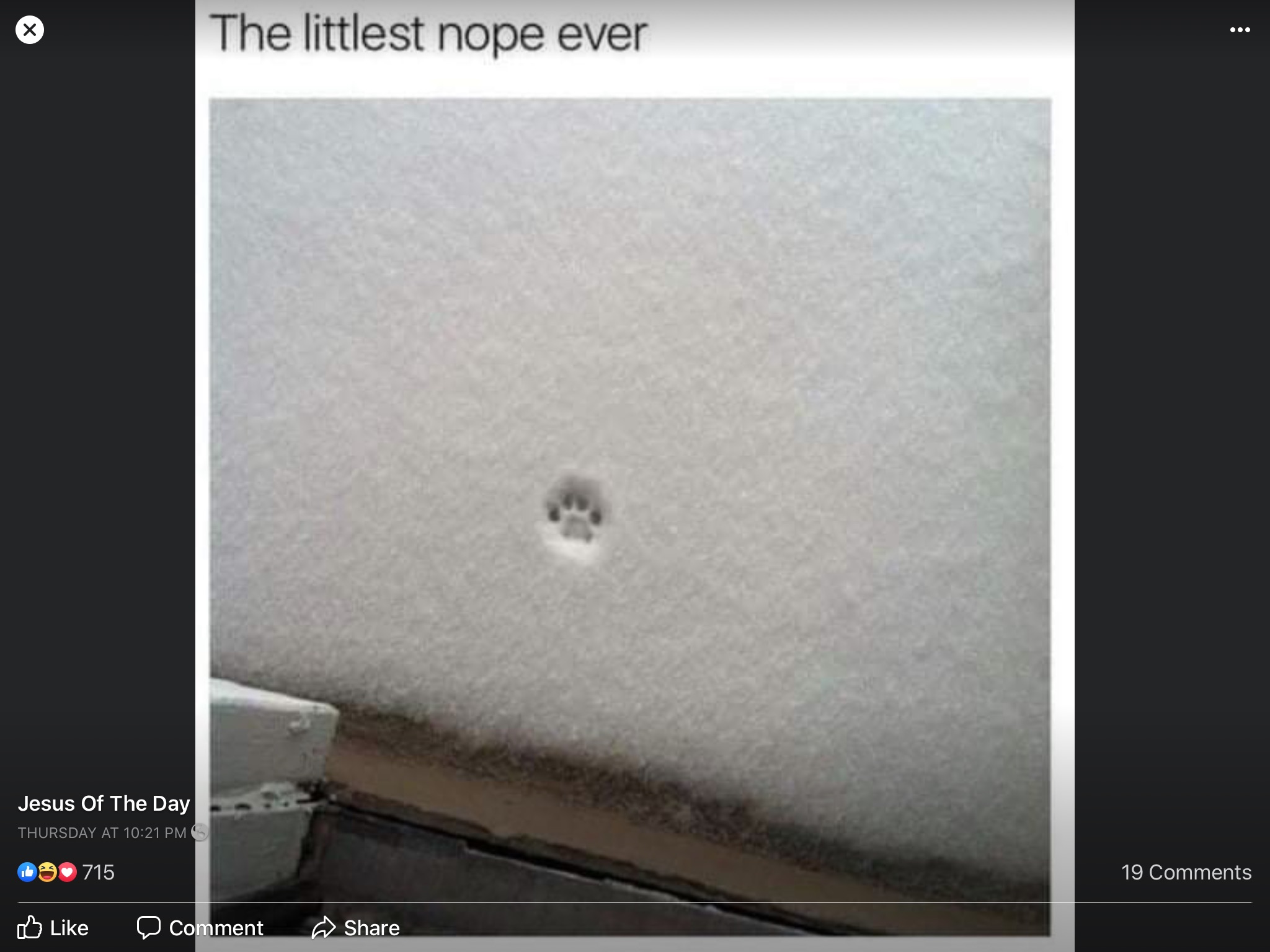 Larry the Cat, Chief Mouser to the Cabinet Office, who lives at 10 Downing Street, weighs in on the election:

For those of you saddened by the exit poll, please consider that 5 years is my remaining life expectancy and I have to live with him…

From Matthew we have three tweets about his major source of solace: Marsh Farm and its beats. First, the daily egress of animals from the Marsh Farm barn, with Smudge the cat supervising:

And the farm ducks demonstrating their name. Can you spot the smart one?

And a look back when Smudge, the farm cat, was a kitten:

A look back to the summer when smudge was young #smudgethecat #Caturday pic.twitter.com/kitWuhkmEk

From reader Barry. I may have published this before, but it’s always good to get an evolution refresher:

Mother bird refuses to abandon her eggs. Why does she risk her neck like this? Because any genes giving rise to the tendency have a good chance of being located as well in her offspring. In effect, those genes are looking after copies of themselves located in other bodies. pic.twitter.com/QabgQXhnx6

Also from Heather. I wish there was a sound track on this one, as I bet you’d hear some kitten-growling:

And the last word goes to Titania. Some readers don’t find her—or rather, Andrew Doyle—funny, but I think this is great:

We have clearly failed to win over the hearts and minds of our fellow citizens.

The obvious conclusion is… we didn’t call them racist often enough. pic.twitter.com/rUbnDlvdFK

Oh, here’s another. She’s a gold mine, I tell you! And look at Boris Derangement Syndrome:

This brave comedy club is banning audience members who voted the wrong way in the general election.

All conservatives should be visibly branded in some way so that we can exclude them from other public spaces.

Only through division shall we be healed. pic.twitter.com/kMxIitagsv