Well, I’m not sure if the London attacker can be described as a “terrorist”, but it’s a reasonable guess given that he was known to police, was wearing a fake suicide vest, and was wearing an electronic monitor when he killed two people and injured three. The monitor was because the killer was on parole for “terrorism related offenses.” The killer was finally killed by police gunfire.

At any rate, the Guardian and several other sources (e.g., here and here) report that a lot of brave people went for the guy, but the most unusual of these heroes used a NARWHAL TUSK as a weapon. As the Guardian reports,

One of the bystanders who helped restrain the attacker was armed with a five-foot narwhal tusk. Amy Coop, a writer and director who was in Fishmongers’ Hall when the attack occurred, said the man took the tusk from the wall.

Here’s the tweet reporting it, and I’ve put a photo below:

A guy who was with us at Fishmongers Hall took a 5’ narwhale tusk from the wall and went out to confront the attacker. You can see him standing over the man (with what looks like a white pole) in the video. We were trying to help victims inside but that man’s a hero #LondonBridge

PROOF: The tusker in action (another person attacked the killer with a fire extinguisher): 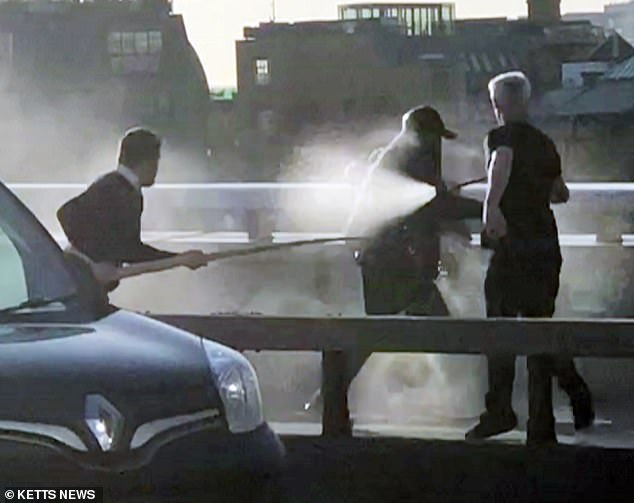 This must be the first time that a killer was taken down with the help of bits from a marine mammal.