According to several sources, including the BBC and the New York Times, the U.S. House of Representatives passed, by a 405-11 vote (with three people, two of them Democrats, just voting “present”), a resolution recognizing as a “genocide” the mass killing of Armenians by Turks between 1915 and 1923. Here’s the business part of the bill’s text:

Resolved, That it is the sense of the House of Representatives that it is the policy of the United States to—

(1) commemorate the Armenian Genocide through official recognition and remembrance;

(2) reject efforts to enlist, engage, or otherwise associate the United States Government with denial of the Armenian Genocide or any other genocide; and

From the report on the vote by the BBC:

The resolution passed by a vote of 405 to 11. House Speaker Nancy Pelosi joined her colleagues “in solemn remembrance of one of the great atrocities of the 20th Century”.

Mr Biden tweeted: “By acknowledging this genocide we honour the memory of its victims and vow: never again.”

It is the first time in decades that the full House has considered such a measure. In the past, attempts were thwarted by concerns that it could damage relations with Turkey, a Nato ally, and intense lobbying by the Turkish government.

. . .To become official policy, the resolution needs to be approved by both houses of Congress and then be signed by the president. But there is no vote scheduled on the measure in the Senate.

This vote undoubtedly stems from opprobrium by both Democrats and (amazingly) Republicans towards Trump’s unconscionable servility with respect to Turkey and President Erdogan, and his tacitly allowing Syria to kill Kurds. (The House also passed a resolution, again involving “yea” votes from both parties, to impose sanctions on Turkey in retribution for that country’s offensive against Kurds in Syria).

The vote, divided by party, is given in the screenshot below (click on it to see the breakdown). 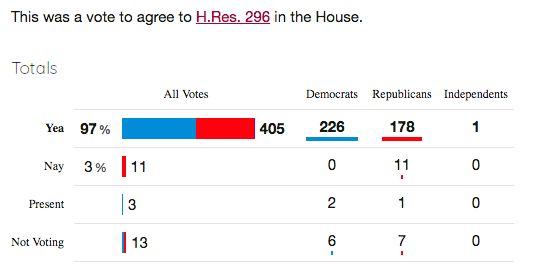 My own judgment, though I’m not a historian, is that yes, there was ethnic cleansing of Armenians (a genocide) during that period, with historians estimating the death toll between 1 million and 1.5 million. Even Cenk Uygur, a Turkish-born American who long denied the genocide—and a host of the news program ironically named “The Young Turks”—has agreed, after years of denial, that yes, there was a Turkish genocide. And, as far as I know, the consensus among historians (except for some Turkish ones) is that there was indeed a genocide.

But I know how repugnant that conclusion is to Turks, as I’ve been warned not to bring it up when visiting Turkey, and have also heard liberal Turks argue with conservative ones about the issue, a discussion that always gets heated.

One wonders who the two Democrats were that bucked their party to vote “present”, a vote that effectively means, “I’m here but I’m not going to take a stand one way or the other.” I’ll name them below.

At least no Democrats voted “nay”. But 10 Republicans did, probably as a tortured defense of Trump’s bootlicking of Turkey.

Here are those ten nay-saying Republicans:

The Democrats who voted “present” were Ilhan Omar (D-Minnesota) and Eddie Bernice Johnson (D-Texas).  Omar may have voted “present” because she’s a Muslim and doesn’t want to condemn the Muslim country of Turkey.

That may indeed be partly true, because in her statement about her vote (see below), she objects to the Armenian genocide being used “as a cudgel in a political fight.” But the person and issue the cudgel is beating are Donald Trump and his ignoring the Turkish massacre on the Kurds!

Omar has never been reluctant to go after Trump, and so her vote in this case cannot reflect her reluctance to endorse a resolution that may obliquely criticize Trump. What she’s doing, in her muddleheaded desire to be a “progressive”, is acting as a mouthpiece for Turkey. And, according to NBC News, Omar’s refusal to take a stand has angered many, including Armenian groups and some of her own constituents. Further, it’s not going to endear Omar to Nancy Pelosi, who’s already peeved at “the squad”.

Below is Omar’s written explanation of her vote to CNN, an explanation that is simple “whataboutery”. As I said, the academic consensus is that there was indeed an Armenian genocide, so Omar is wrong to imply there isn’t general agreement. What she’s saying is that if you condemn one genocide, you must condemn them all (of course, what counts as a “genocide” must be Omar’s decision, not that of historians). Note that she refuses to give her own opinion on whether there was a mass slaughter of Armenians.

Omar's office has sent this statement to CNN explaining her present vote: pic.twitter.com/Gpj198jx0p

Ran into @IlhanMN on the Hill and asked if I could ask her about the Armenia genocide vote and statement and her answer was “you may not.”

The other “present” voter, Democratic Congresswoman Johnson, also once dissimulated about the genocide, at least according to the Washington Examiner:

Democratic Rep. Eddie Bernice Johnson of Texas voted “present” on the measure. When asked in 2009 if she recognized the genocide, she said, “I don’t acknowledge, I was not around.”

This is the same reasons creationists use to deny evolution: “I wasn’t there to see it happen and neither was anybody else.” It’s incredibly lame.

Paul Gosar from Texas, was the sole Republican who voted “present”. His long explanation, which can be found here, is that he sees the resolution as an attack on Donald Trump (Gosar is on the hard right). The last bit of his screed derives from the resolution’s statement that it encourages recognizing “the relevance of the Armenian Genocide to modern-day crimes against humanity.”  Well, it’s not clear that this specifically refers to Trump and Syria.

An excerpt from Gosar’s statement:

. . . I will have no part of supporting false comparisons, war-mongering, and agit-prop from the Democrat congress. I voted present, instead of NO, because I want it to be clear I fully recognize the historic record of the brutality in the Ottoman Empire campaign against Armenian Christians. I reject any effort to conflate that tragedy, over a century old, with what is happening in Turkey today.

Well, at least he admits there was a genocide. But he also claims that there’s no credible evidence that Turkey has recently committed atrocities against the Kurds, which shows you how tenuous is his grip on reality—or how frenetically he osculates Trump’s posterior.